Cafe owner in Prague organises a farewell party for coronavirus, thousands attend it

While the world is battling Covid-19, Prague gave a farewell to coronavirus.

Organised by a cafe owner, the ‘symbolic farewell party’ was attended by thousands on the historic Charles Bridge. The citizens of the Czech Republic celebrated the event with food and drinks laid over a  500-metre long table. There was music as well with no adherence to social distancing. 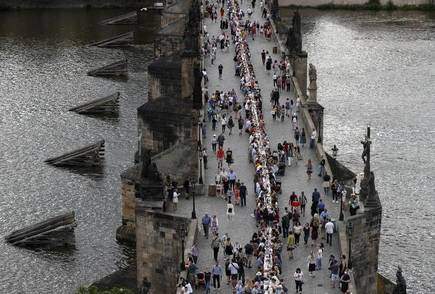 The party comes at a time when World Health Organization WHO warned that the pandemic is far from over and according to reports there have been fewer than 12,000 infections in the Czech Republic, a country of 10 million, with about 359 reported being dead because of the virus.

The country was among the first to close its borders, early in March. Restaurants and bars are allowed to operate but with limitations.