15 Braveheart NSG Black Cat Commandos rode out on 15 Royal Enfield Stealth Black 500 motorcycles, on an expedition with a mission. An ambitious 8000kms journey of determination. An aim to awaken a nation, to mobilize unity, and reignite resilience.

When these 15 motorcycles were put up for sale online, it was an irresistible opportunity for many to own a part of history. 15 seconds is all it took for these Limited Edition motorcycles to be booked and sold.

Royal Enfield motorcycles have been the trusted steeds of the Indian armed forces since 1955. The resilience, durable design, and maneuverability of the motorcycles have made it a popular choice for the men of mettle. In October 2017, Royal Enfield was happy to support the NSG Motorcycle Expedition - a 40-day, nationwide ride aimed at spreading awareness about fighting terrorism and serving the nation. Once the expedition was completed, Royal Enfield decided to sell these distinguished motorcycles online to connoisseurs who wanted to own and ride a part of Indian Armed Forces legacy. 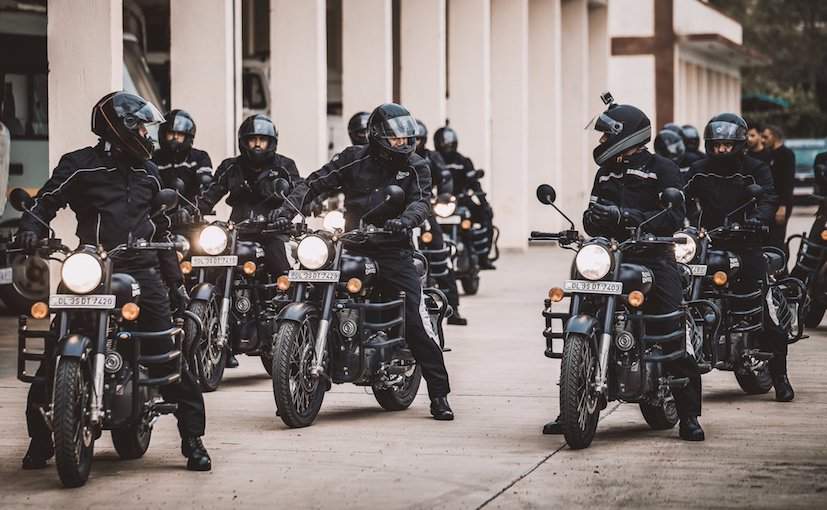 Scheduled to be conducted on December 13th, the registration for the online sale of these motorcycles was opened on December 8th, 2017. Over the ensuing 5 days, the specially created webpage www.royalenfield.com/bravehearts  saw a registration of more than 2000 interested buyers who stood an opportunity to book and own one of the 15 motorcycles on a first-come-first-serve basis. The sale opened at 12.00 noon Wednesday, December 13th, and in less than 18 seconds all the 15 motorcycles were booked and sold at a special price of Rs. 1,90,000/-, with an online booking amount of Rs. 15,000/-. The 15 lucky winners will be handed over their Limited Edition Stealth Black 500 motorcycles at a local dealership on payment of the full amount.

Mr. Rudratej (Rudy) Singh, President, Royal Enfield, while commenting on the sale of the motorcycles said, “Our long-standing partnership with the armed forces and the support extended to this expedition is to stand by the men who protect and defend us. The journey of these 15 bravehearts is an authentic story of resilience and we are honoured to have helped them on this journey, and further by sharing the sale proceeds with Prerna School. This reiterates that the power of purpose is sometimes bigger than the purpose of commerce”

Having been a part of NSG’s countrywide, ‘Ride Against Terror’ and decorated with a unique NSG insignia, the 15 Stealth Black 500 motorcycles are distinctive and offer buyers an opportunity to own a part of history. The entire proceeds from the sale will go to Prerna, a  non-profit initiative supported by NSG, which helps educate underprivileged and differently abled children.

The recently launched Stealth Black Classic 500 motorcycles were a part of NSGs Motorcycle Expedition, aimed at spreading awareness about fighting terrorism. Covering over 8000-kms across the length and breadth of India on these motorcycles, 15 braveheart, Black Cat NSG Commandos spread the message of collective responsibility towards fighting terror among citizens. This expedition also commemorated NSG’s 33 years of service to the nation.