Call it a mecca for all things Royal Enfield. Or you could hail it as a landmark accomplishment, and a watershed moment in the path-breaking history of Royal Enfield. You could even consider it as the new unofficial command house of the motorcycle makers. The new Royal Enfield Garage Café, which opened officially earlier this month in Goa, is all of that and more. And the scene is all-too familiar: the unhurried waters of the River Baga flow alongside the paved stretch of the Arpora-Baga Creek Road, a hop-skip away from Calangute. Every few moments, the rumbling sound of motorcycles breaks the silence. 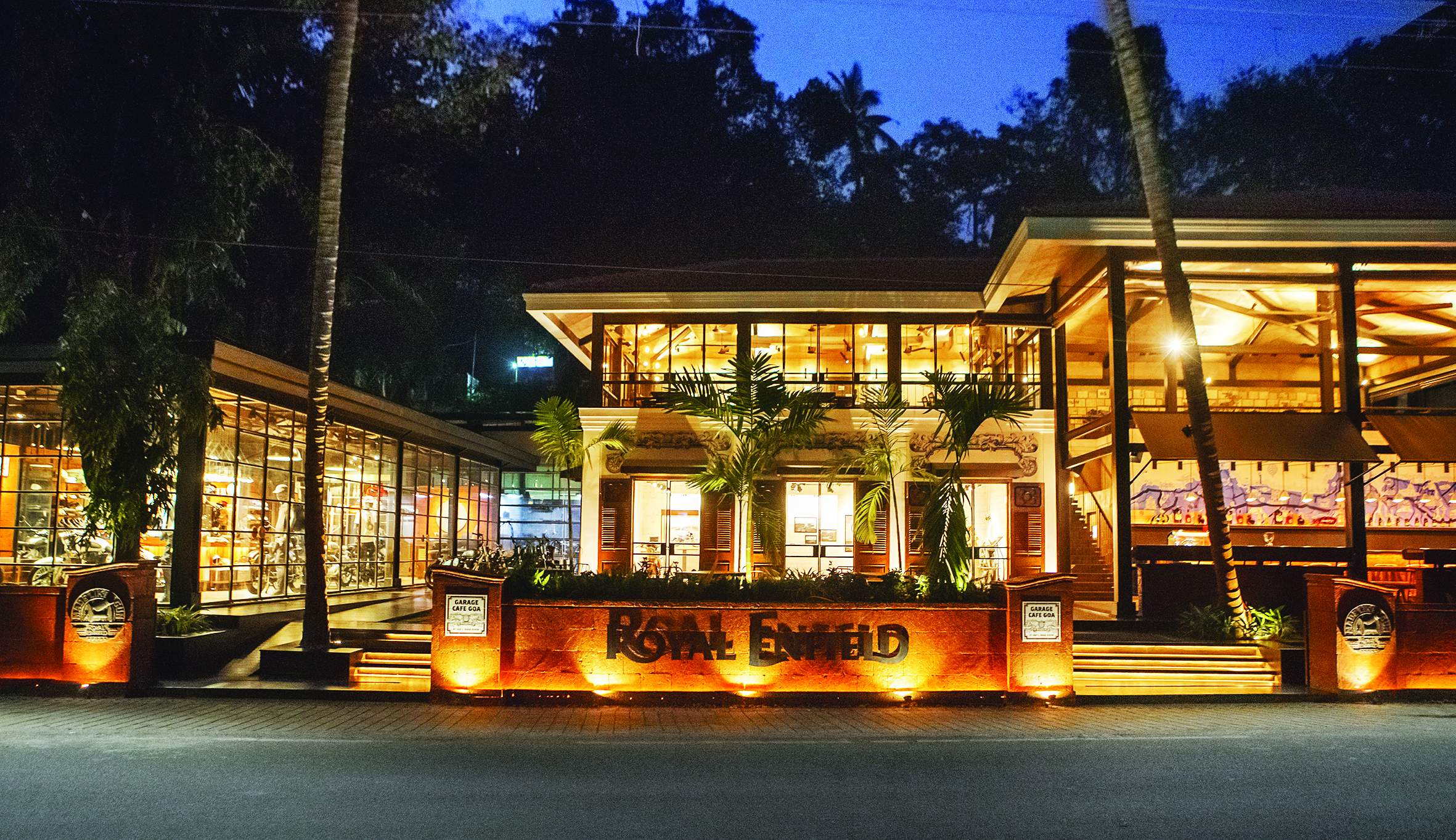 There are loud cheers, hoots and even battle cries now and then. But by and large, given some great food and pitchers full of chilled beverage, it’s as laid-back a setting as you can imagine — perhaps short only of a few hammocks. A three-part destination for bikers, the Garage Café includes a showroom and custom gear store (with a customisation area and service bay), a mini-museum and an exhibition space that showcases segments of Royal Enfield history, and a 120-seater café designed around a central, traditional Portuguese-style structure.

A renewed old culture
My first evening at the Garage Café was for the launch of the new twin Royal Enfield bikes — the Interceptor 650 and Continental 650 — at a packed, media-hounded ceremony in mid-November last year. With bikers and enthusiasts out on a wild festival footing for the Rider Mania gathering being hosted at the same time at Vagator, the event was led with a friendly address by Siddhartha ‘Sid’ Lal, CEO-MD of Eicher Motors, and Rudratej ‘Rudy’ Singh, President of Royal Enfield Motors. The gathering also brought together some lifelong, die-hard patrons and champions of Royal Enfield motorcycles. Gordon May, the official historian of the bike makers, was one among them — and never short of an illuminating anecdote or interesting backstory. The original 250cc Continental GT café racer, for instance, was actually designed in an uncommonly democratic manner, rather than by a closed group of designers, at the company’s parent factory in Redditch, in Worcestershire, England, says Gordon. “The low-slung handlebars, and tweaked engines, were typical of the 1960s, when everybody was tinkering their bikes to be faster, and zippier,” he explains.

The 250cc Continental GT, in fact, became the most popular bike in its segment back in the day, and almost single-handedly ushered in the “café racer” culture. A lot of that break-free spirit remains intact in the new 650 version, but it’s the parallel-twin engine Interceptor 650 — another iconic ’60s design — that Royal Enfield’s now hedging its bets on, to make a larger foray into the international market, notes Gordon. 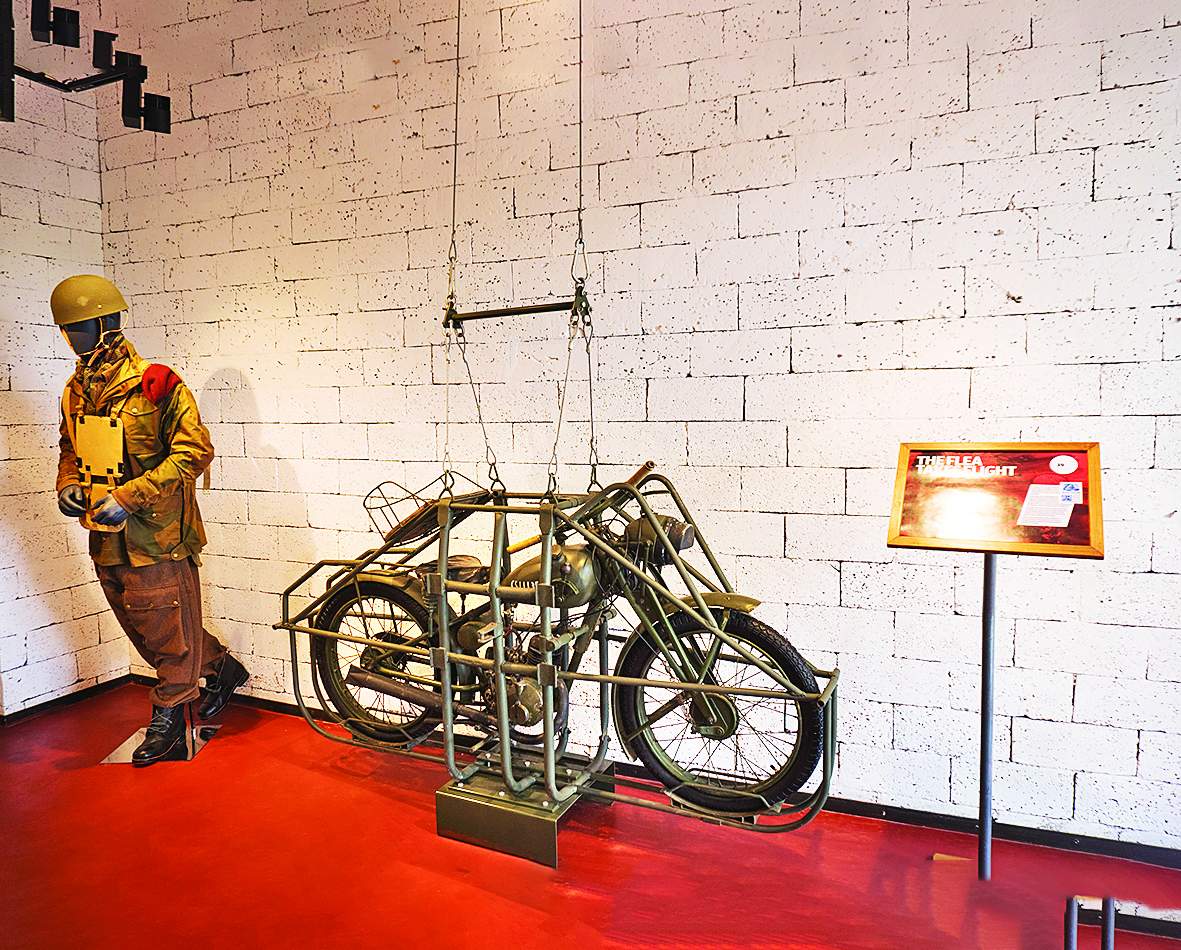 Overland legends
The oldest remnant from the Royal Enfield motor-repositories at the Garage Café is the 1939 Royal Enfield 126cc 2-stroke Model RE, the much-historied lightweight paratrooper motorcycle dubbed ‘The Flying Flea’, which was parachuted together with airborne troops in World War II. A note at the display explains how the bike, shown encased in a metal drop-cage, was also known as the “airborne motorcycle”, and was air-dropped (with the detachable cage) and run in many major battles of the era. Alongside the Flying Flea, stand original models of a 1963 Continental GT café racer, and a 1965 MK-2 750cc Interceptor. 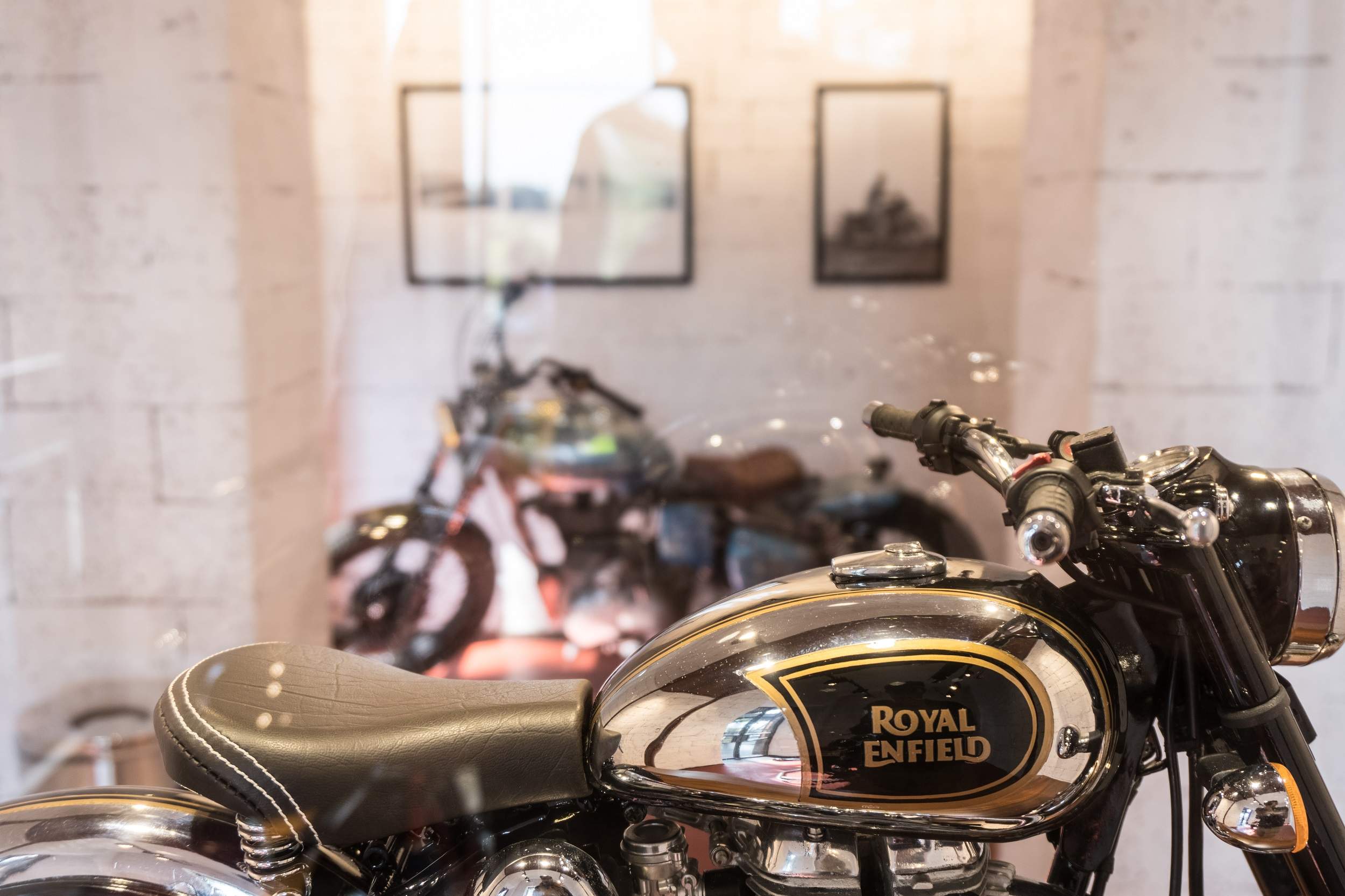 There’s also a remarkably accurate 1:3 scale model of a Classic 500, and an instructive cross-section model of a 500cc engine. In an area adjoining the mini-museum, the Garage Café also has a handful of custom bikes on display, each making a statement of brilliant paint jobs, refined engine specs, specialised add-ons and high-end mods, apart from choice accessories.Both the Continental GT and Interceptor have huge cult followings back in Europe, notes Gordon, who has a vintage Enfield collection of his own, including a 1933 250cc Bullet, a 1952 500 Twin, and a 1965 GT, apart from others that he’s restoring. In 2008, Gordon took on an astonishing 8,400 mile ride on his 1953 Bullet, from Manchester, England, to the Royal Enfield factory in Chennai — resulting in the book, Overland To India. Two years later, he took on an even more daunting ride, from Manchester to Egypt, which led to the book, Overland To Egypt, while his most challenging adventure to date was from the UK to Vietnam. As for the Royal Enfield legacy, the café adds to the many other new chapters being written into the bike-makers’ fabled history, tying in with their brand new technology centre and R&D facility that opened in Leicestershire in 2017, and the start of production at a new factory, spread across 50 acres at Vallam Vadagal, near Chennai.
For old hands like Gordon, though, it’s the sense of vintage charm from back in the day that means so much more.

By the Baga Creek 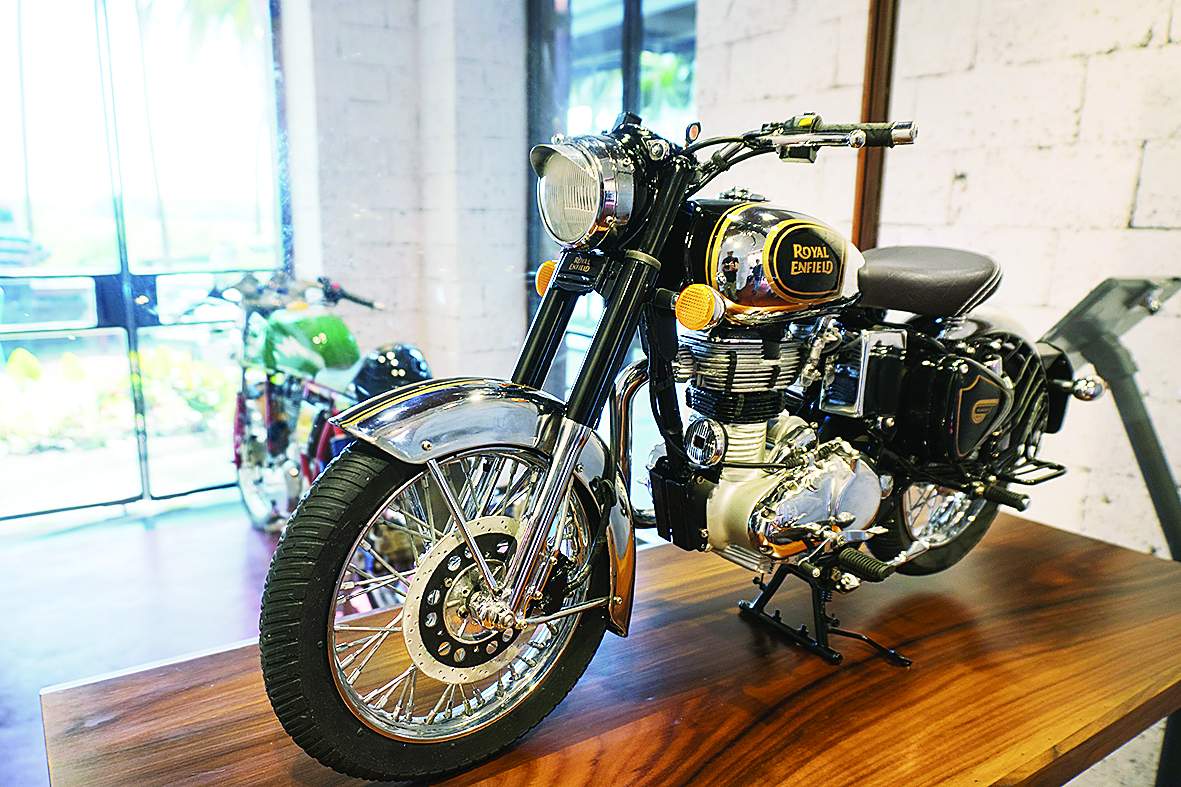 For the artistically inclined, the façade of the main building features specially commissioned artworks created by Goan artisans, reproducing Royal Enfield iconography on handpainted tiles, in a style inspired by the Azulejos form of Spanish and Portuguese ceramic work. There’s also a hand-painted backdrop by Monde Art, themed on a Goan road trip. The first floor, meanwhile, includes a reading lounge, with a mural of open books, and a sprawling view over the creek. The café also makes room for a painting made by a participant at Rider Mania, in tribute to the festival, which witnessed armies of bikers gather for three days of dirt track races, slow races, group rides and events from arm-wrestling (for women too) and Maze Chase to Cleanest Bike and Assembly Wars. For a note, the festival witnessed a staggering gathering , and was notable for its engaging Long Distance Travel Forum, apart from live gigs by Divine, the Karsh Kale Collective, Benny Dayal, When Chai Met Toast and The Local Train. There were also ample instances of graffiti, 3D canvas creations and sculpted works assembled on acrylic blocks.On the side of the café, a state-of-the-art service centre includes a customisation zone, and there’s help at hand in the form of expert engineers, kitted up to help enthusiasts tinker about with their DIY ideas. While at the store, bikes aside, are new lines of Protective, Urban and Essential Riding Gear, as well as apparel, luggage and accessories from gloves to riding boots. 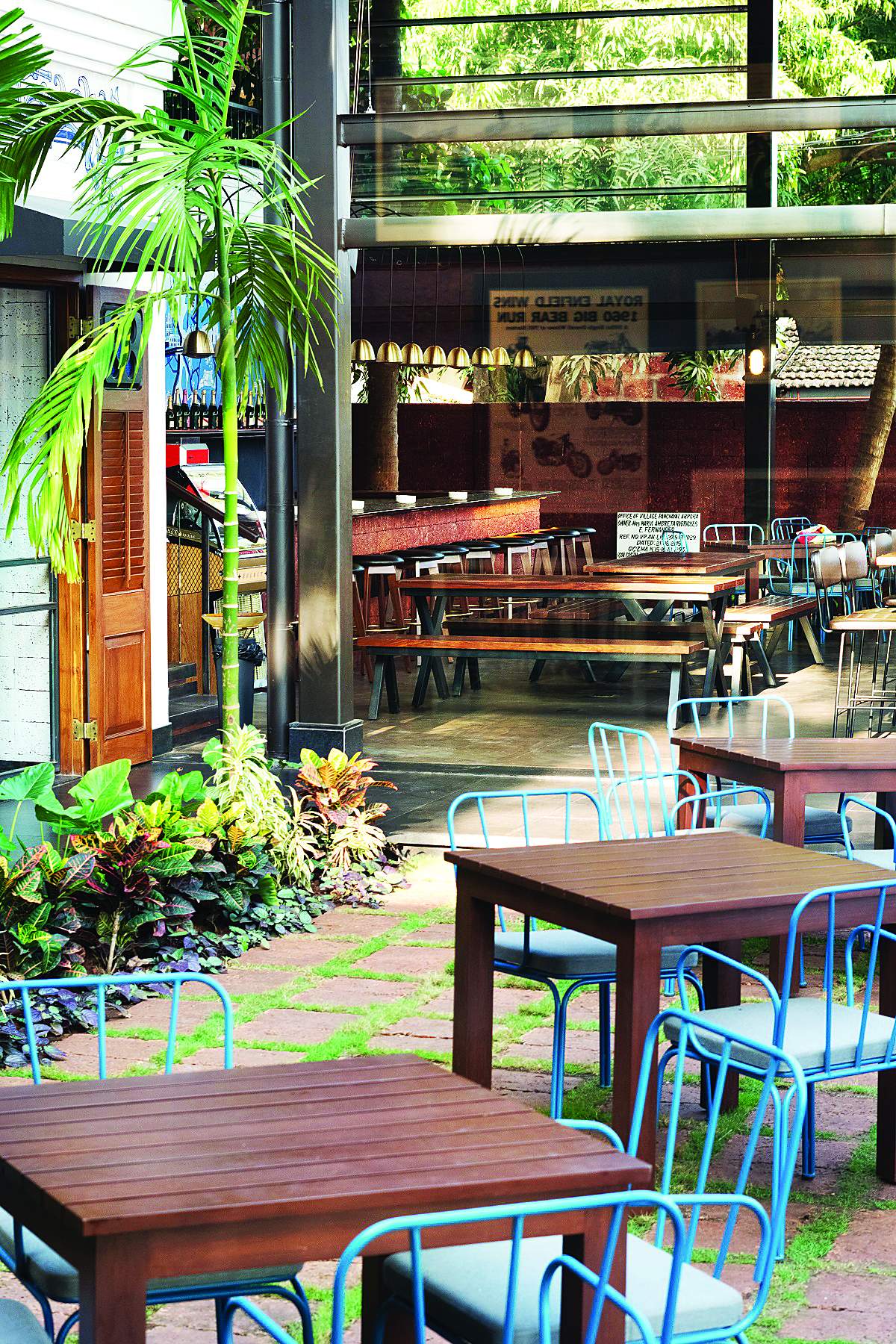 At the heart of it, the general idea is very much about building a community, reassures Gordon, over a few taps of crisp Susegaad, apparently freshly run in from the artisanal micro-brewery down the road. The year-long cross-country rides, the revamped online forums and growing number of rider stories — all of that goes into making the Royal Enfield community the largest, and most active group of its kind. Of course, to play an active role in shaping the course of Royal Enfield’s urban history — that’s just a royal feeling, remarks Gordon.
We wind things up with the promise of another edition of the festival, lined up
for later this November, and the prospect of riding up to the café, to kick back for a few hours by the Baga Creek.

The writer was at Rider Mania 2017 in Goa by invitation.