The Mandira Mandate: Start 2018 with some #FitnessGoals from the actor

Staying relevant in an industry that’s best described as ephemeral, if you’re not a Khan or a Kapoor, is not a walk in the park. And for women, things are that much more challenging. It wouldn’t be far from the truth to say that it takes someone special to do so with aplomb.

Mandira Bedi, who became a household name with the television series Shanti, back in the ’90s, is a prime example. “I was doing my PG in media. My intention was to be behind the camera but never in front of it. I was working with Prahlad Kakkar as part of my course when I was offered the job as Shanti,” says Mandira, adding, “Shanti was three and half years, five days a week. It was an amazing experience. It taught me to work long hours and about hard work. I like to think a lot of her character rubbed off on me. It gave me a lot of confidence in front of the camera.”

Having been the lone female voice in the world of Indian cricket at one point, hosted TV shows, starred in films and launched her own sari label, Sarees by Mandira Bedi, the actor is certainly talented, creative and a force to be reckoned with. 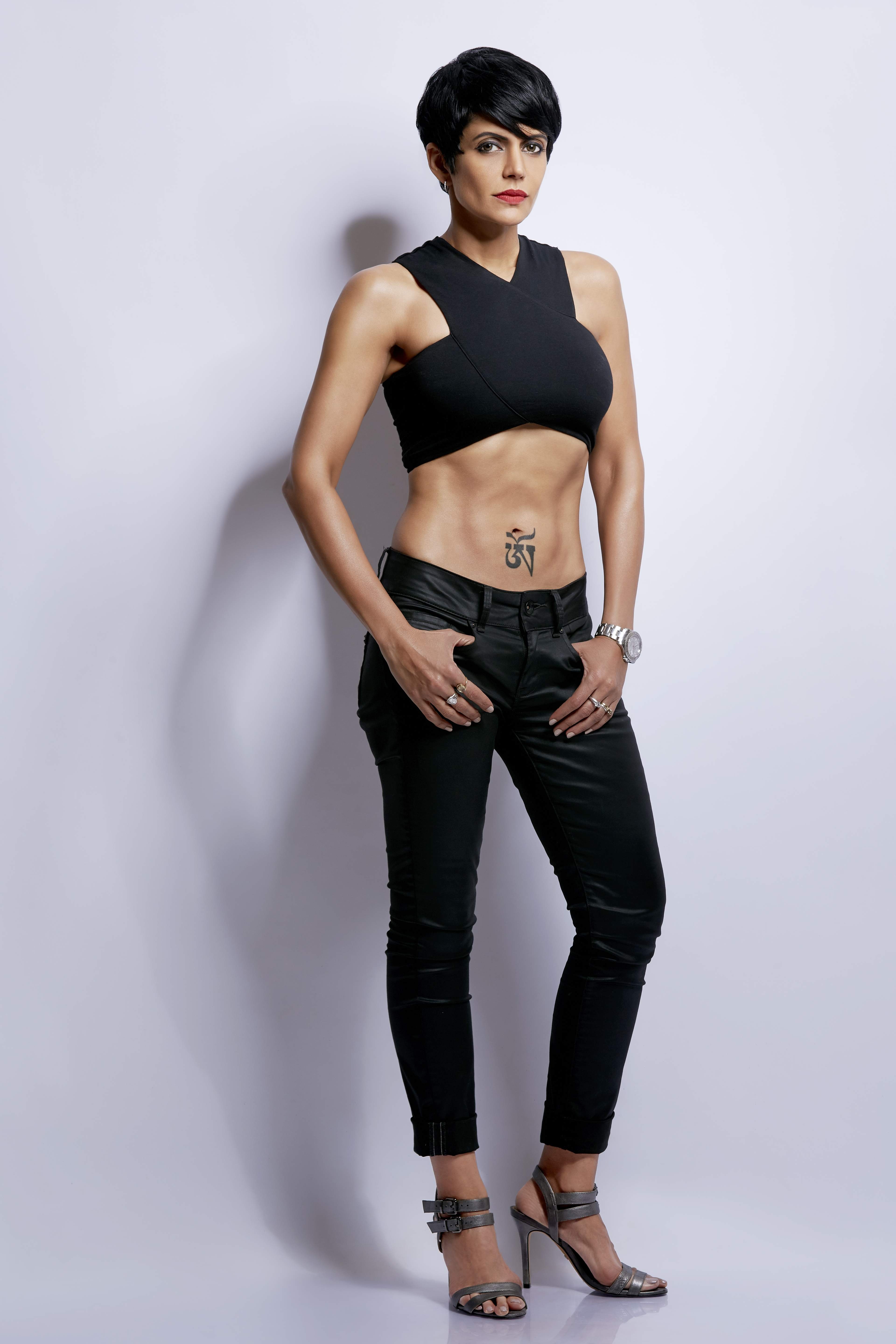 In early 2018 alone, Mandira has three film releases lined up: the Telugu film Saaho, the Tamil film Adangathey and Vodka Diaries in Hindi. Currently as popular for her ripped physique as her acting, she talks to us over the phone from Mumbai about her commitment towards fitness, her forthcoming projects, and what it takes to be where she is.

You’ve been in the industry for over two decades, and you’ve still kept up with the times. How have you been able to do that?
I’ve always gone with the flow. I haven’t sat and said now is the time to cut my hair or lose some weight. Lots of people told me not to cut my hair, because women in entertainment don’t have short hair. But all the roles that I’m getting now are because of my hair.

Even fitness... it just happened, it was not a calculated move. I shot an ad for a gym the other day and recently, I shot for the cover of a health magazine. There is no formula that I have been following.

Most of your roles are strong female roles. Your comments?
I think this has all happened after my new hair-do and my commitment to fitness. Two years ago, I was not getting roles like the ones I’m getting now. Now, people are seeing me that way, as someone who is a strong woman, who can carry off strong roles.

In the Tamil film, Adangathey I play a cop, in Saaho I’m playing a negative character and in Vodka Diaries, I play a poet. I’m not interested in doing roles where the character doesn’t really make a difference to the plot.

How challenging is it to play a negative character?
I don’t know if people remember Kyunki Saas Bhi Kabhi Bahu Thi. I played a negative role in that too. People would stop me on the street and say, “Leave Mihir alone, he’s Tulsi’s, not yours.” I believe that if someone is so convinced, to come and berate you for something you’ve done on screen, then you’ve done your job. 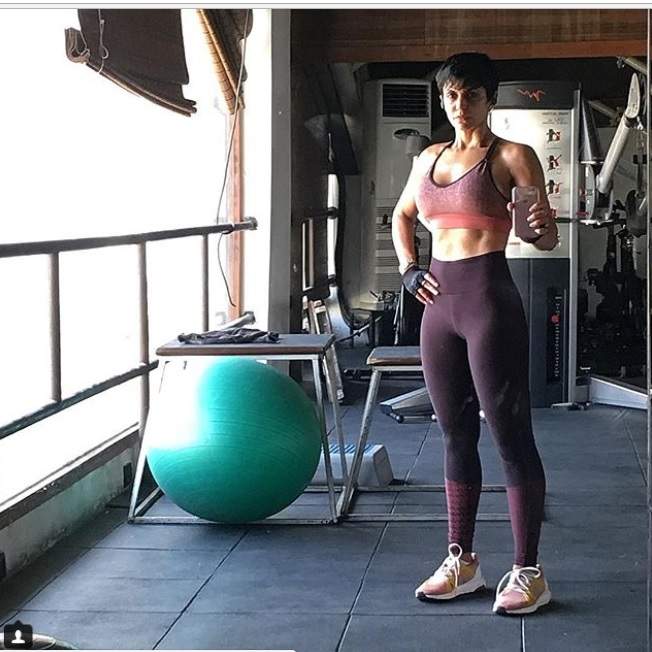 You’re also in a web series called Smoke. Tell us about your experience working in this new format.
Smoke is a series by the late Tom Alter (who passed away in September 2017). I play a drug lord’s wife. I think the format is a lot more advanced and liberated, and much lesser is held back. There is no censorship, so you can freely express your thoughts. There is a lot more freedom in the character and storyline. I’ve done things in this particular show that I’ve not done as part of other roles.

Who are a few actors and directors you’d love working with?
Ranveer Singh — I like him a lot. He has amazing energy. Of course, I wouldn’t be opposite him because I’m much older. There are lots of great directors too, whom I would enjoy working with, like Sanjay Leela Bhansali, Karan Johar, Rakeysh Omprakash Mehra and Madhur Bhandarkar. They’re all making some really good films.

What inspired you to make the first move towards fitness?
I started training in 2008, before I started Fear Factor. I realised that if I was going to be on national television in a pair of shorts, I better look fit. So that’s how I got into it initially. Somewhere along the way, I broke my hip and my first thought was, ‘How will I exercise?’ not ‘How will I go about my
daily business?’ In 2010, I got pregnant and couldn’t exercise too much. I ended up putting on 22 kilos. I gave myself six months to get back in shape and I did stick with it. Now, I’m the fittest I’ve ever been.

What’s your fitness regimen?
I work out five days a week, and that’s how I start my day. I do a mix of weight training and functional training. Sometimes, I go for a swim or a run. I like mixing things up. I’ll do anything that keeps
me active for one to one-and-half hours.

Are there days when you don’t feel like hitting the gym?
Yes. Sometimes I just want to skip the gym. But I push myself. Also, I make it happen in the morning, or else, my schedule goes for a toss.

Your advice for those who are intimidated by exercise.
You have to start small. For instance, start running for 10 minutes, then build it up to 15 and then 20, and so on. Give yourself small goals and keep increasing them. But most importantly, give your body one day of rest in a week.

Could you tell us a little bit about your diet?
I try to keep carbs out of the mix at night. I do eat it during the day because I need it as fuel for all the working out that I do. Come the weekend, I loosen up a bit. But I can’t wait for it to be Monday because I can get back on track. I snack on nuts, protein bars and yoghurt (though I’m off dairy at the moment). I love salads and eat them all the time. There was a time when I did not like salads but now there are many great salads available. I also indulge in a little bit of dark chocolate every now and then.

Tell us about your journey as a designer.
It’s a very short journey so far. I used to wear saris for television and while hosting the cricket broadcasts, with my trademark noodle strap blouses. So I sort of became associated with the garment. A few years ago, over Diwali, I went to a fabric store, put together some fabrics and made a couple of saris for myself, which I wore to a few parties.

People were so impressed by it so I decided to make a go of it. I did two exhibitions before opening a store. Through GST and demonetisation, the brand is surviving. Retail is a different ball game, it’s not the easiest thing to do. It’s a new space for me, but I’m enjoying it.

What are some other silhouettes you are working with?
I’m also experimenting with skirts, blouses, palazzo pants and kurtas. I created this beach sari, which you can wear as a sarong or for a night out. I stick to designing what I can wear. I don’t do salwar kameezes, because I don’t wear it and I don’t understand the silhouette.

What’s your personal style statement?
I’m all about comfort dressing. Even today, I’m returning from a lunch at the house of my son’s school friend, for school mums. I’m wearing white sneakers and a dress. My work makes me wear high heels about 3-4 days a week. So when I’m off duty, I wear sneakers. There’s no in-between.

Who are some of your most loved designers?
Ritu Kumar is a favourite of mine. I’m a Ritu Kumar bride. And I wore her right from event one, all the way to the reception. I think she’s classic and timeless. I’ve also worn a  lot of Satya Paul over the years. Raghavendra Rathore is great for blazers and sherwanis, and Gavin Miguel and Swapnil Shinde for their gowns. Another designer I keep returning to is Gaurav Gupta. I just love his aesthetic.

According to you, what are some wardrobe essentials every girl must have?
A good pair of heels, a pair of classic blue jeans that keeps you honest (you should be able to tell if you’ve put on weight or lost weight by wearing them), a classic black dress you can dress up or down. Also, whenever you buy a sari, make yourself two blouses — a slinky, sexy one for parties and another conservative one for pujas and formal events, so your sari has more wear.

What are few articles from your wardrobe that you can’t do without?
I have these winter boots from Clarks, which I bought three years ago. They’ve survived three seasons. I drove a goods carrier truck in the Himalayas last year as part of a reality show. And the boots saw me through that extreme weather up in the mountains. Other favourites of mine are a pair of True Religion jeans (which ‘keeps me honest’) and jhumkas my mother gave me when my son was born, six years ago. They have been passed down generations are roughly 100 years old.

Would you say there is a need for a strong female voice in the world of cricket today?
I was associated with cricket for 10 years but that was long time ago. People are looking for younger, newer faces. It is important to have a woman representing the other half of the population. That’s all I’m going to say.

What’s in store for you in 2018?
I’m looking at 2018 as one of my biggest years in the industry. I have many releases lines up. I’m doing Saaho, Vodka Diaries, Adangathey. There are two more movies that I’m in the process of signing. On the fashion front, maybe I’ll get into another silhouette.