Ethan Hunt is back! Tom Cruise on Mission: Impossible - Fallout, and the making of a blockbuster

Everytime a new Mission: Impossible movie is released, time seems to stand still, as we are escorted into a familiar world of insane stunts, high-tech gadgetry, customary street chases and witty dialogues, including the most recognisable of them all — ‘Your mission, should you choose to accept...’ In the middle of it all is Ethan Hunt, the primary character of the series played by Tom Cruise, an agent tasked with an ‘impossible’ mission in each movie. This week it’s going to be no different as the 56-year-old actor’s love affair with the MI series continues with the release of the latest instalment of the franchise, the sixth overall, titled Fallout.

Twenty-two years since the release of the first movie, the series has grown into one of Hollywood’s most successful and critically acclaimed action franchises of all time. As Fallout releases today, the stakes are higher than ever, both for the actor (who has done his own stunts in the movie) as well as the franchise. At a time when people are questioning the relevance of the series and wondering whether it has overshot its use-by date, director Christopher McQuarrie has vindicated its global appeal with a new bigger and bolder movie than its prequels, in which Ethan is faced with the ghosts of his past and is facing the wrath of global intelligence agencies and assassins alike. 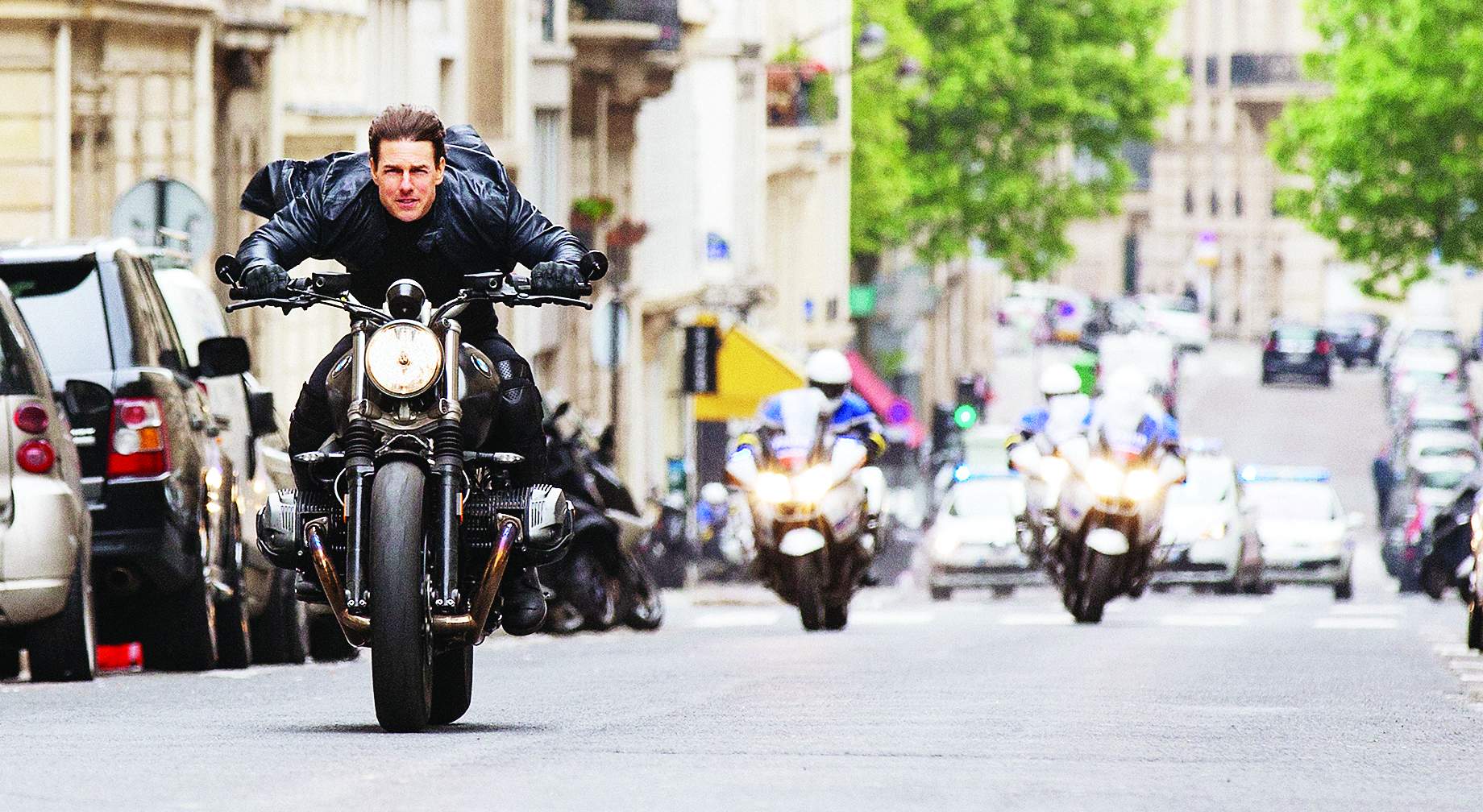 For Tom, Fallout is his biggest release before Top Gun: Maverick (the sequel to the cult 1986 movie, Top Gun) hits screens next year. It’s hard to say which is more anticipated, but both movies see the return of two much-loved characters on screen. Fallout had its global premiere on July 12, and critics have already called it the best movie of the franchise, lining it up along with some of the all-time great action movies of Hollywood. As India waits eagerly, the actor shared with Indulge about his gruelling experience while shooting for Fallout.

How was it working with director Christopher McQuarrie again after Rogue Nation?
Tom Cruise: I just love working with McQ (McQuarrie). The way that he approached this, it was like “I’m gonna honour the Mission: Impossible franchise but I’m gonna direct it like I am another director.” And he did it — the visual style in this movie is different, even though it still has his bold sensibility of storytelling. The mission in this movie is tougher than all the previous missions, so we pulled out all stops for this one. I love his wit and his elegance, as well as the toughness that he brought into the movie. I am so proud of him and it is always such a joy to work with him.

What were your thoughts about teaming up with familiar faces of the MI team again?
I love working with people I admire and respect. And I love these actors and the characters they portray.  Each actor is very charismatic and dynamic and I am interested in all their stories. The core MI team is going to be Simon Pegg (Benji), Ving Rhames (Luther) and myself, plus Alec Baldwin, who plays Alan Hunley, the secretary of the Impossible Missions Force (IMF). And as for Rebecca Ferguson, you will have to watch the movie to see what happens to her character, Ilsa Faust. Charismatic and athletic, she can uniquely hold the screen all on her own. 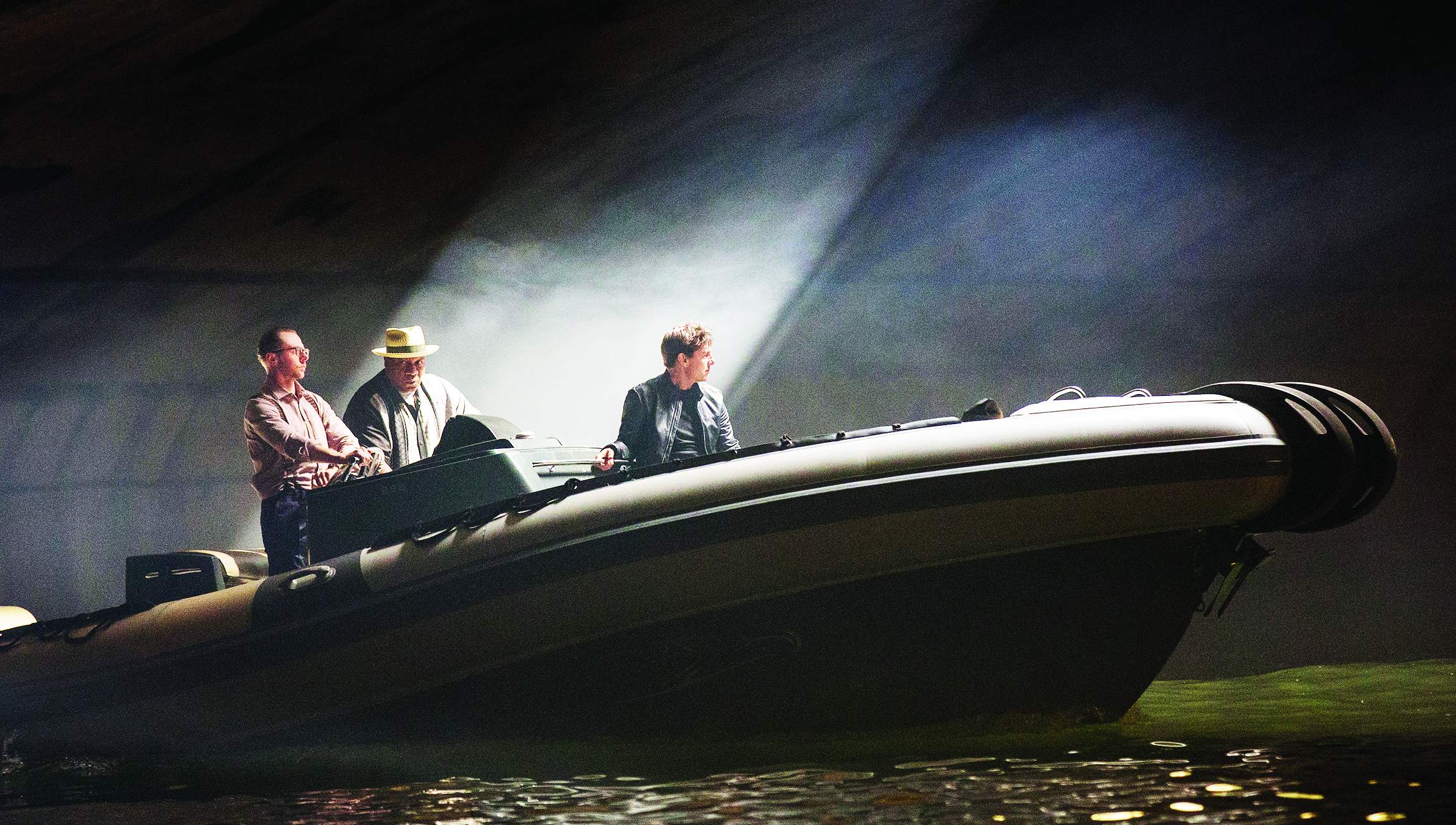 What does the return of Julia Meade-Hunt, Ethan’s wife, mean for the series?
The team talked about emotion in this movie, since this is a combination of all the previous missions. And you can’t have that emotion without bringing Julia back (played by Michelle Monaghan). To have Michelle back is incredible, and it plays very well with our intention to lead up all the previous missions upto this movie.

How was your equation with Henry Cavill?
Henry was so helpful and so professional throughout the movie. I have enjoyed watching his work in the past and always believed in his talent. In this movie, he is pulling no punches and not holding anything back (especially referring to the hand combat sequence). As for the helicopter sequence — the stuff that he had to do was extreme. It was freezing cold in New Zealand at that time and he was in the other helicopter and he delivered his best.

Take us through the intense risks and preparation done for the skydiving sequence.
All the stunts in the movie are extreme, so it was crucial for us to be meticulous in our preparations, both physically and mentally. We pushed the HALO jump scene to the end of the entire shooting schedule, as I had to undergo a gruelling training procedure for the same. We went to Abu Dhabi and the UAE military was very helpful by giving us one of their C-17 Globemasters. It takes place at night right when the sun sets, and was very technical and dangerous, with one take scheduled for one day. During the dive, I had to be exactly three feet apart from the cameraman below me, who was also in freefall and maintaining the camera focus all the while.

What according to you is the legacy of Mission: Impossible and why is it relevant?
I loved the TV series when I was growing up and I loved its music. To be able to adapt it into a feature film and take it from a Cold War series and bring it to modern audiences, makes it, without a doubt, one of the most challenging films to produce. For the stunt sequences, McQ and I will spend a lot of time, sometimes a couple of years, working on different sequences, since MI is all about practical action. You see the trailer of these movies, and you instantly find a different vibe compared to other action movies. That’s why we try to make the MI movies as elegant as possible, that is gripping, as well as high on aesthetics in every department.

What motivates you to keep making movies?
Once we got that last take and finished the whole movie, we knew we wouldn’t be doing it again. So we called the crew over and showed them the take. Everyone was so excited and proud of what we had accomplished. In my view, that is the greatest feeling, and why I am addicted to movies. To be able to work with people of different talents and make movies for the audience  — that is great.

A breakdown of what went behind the hardcore stunt scenes in the movie — sans CGI and a body double:

Cut to the chase
Fallout is replete with street chases, with Tom riding motorcycles like the BMW R nineT and cars like the classic 1986 BMW M5. There’s a scene in Paris where 70 cars are driven by stuntmen who are trying to avoid Tom riding the bike towards them at high speed. And, as we see in the trailer, he does it without a helmet, giving stunt coordinator Wade Eastwood a really tense time during shoot. “It only takes one knock in the wrong place on your head and it can be a fatal accident,” Wade admits.

The big scare
It’s ironical that the biggest injury happened during one of the easier action sequences. A simple rooftop chase turned into a nightmare for the crew, as Tom broke his ankle while jumping between buildings (below). This much-publicised story halted Tom’s shoot for six weeks, during which time he indulged in physical therapy and trained for 10-12 hours a day. However, it took a further four weeks for him to start running again. Director McQuarrie says, “This gave me the opportunity to rewrite some of the story and finish the screenplay. In the long run, it was to the benefit of the film.” Up in the air
Tom has gone a step ahead in this movie when it comes to aerial stunts. Be it parachuting from a Boeing C-17 Globemaster military plane at 25,000 feet or flying the Airbus H125 helicopter. For the former, Tom trained for over a year, but even that didn’t guarantee a smooth sailing. “It was bitter cold, and I was wearing a rig that cuts off the blood circulation, so my legs were numb,” he reveals. 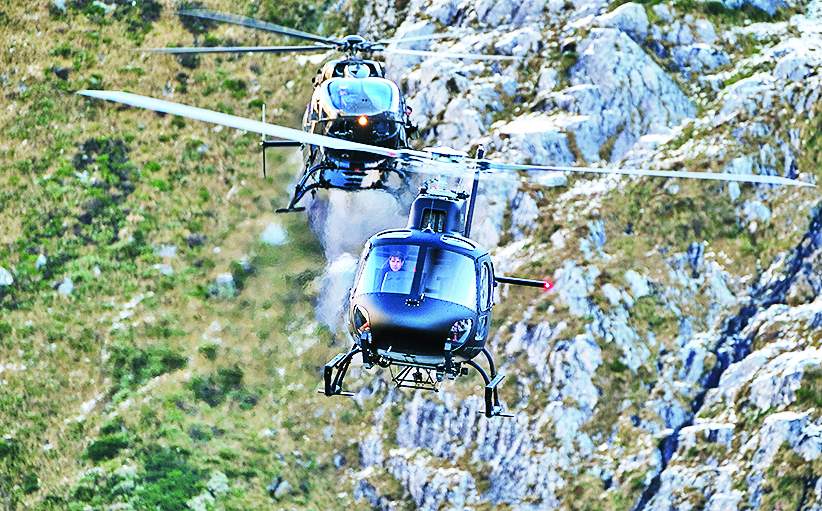 Despite India featuring in crucial plot points of the movie, the team could not get the necessary permits to shoot the scenes in the country, especially in Kashmir, where the climactic helicopter chase (above) featuring Tom and Henry takes place. Hence, they shot the scene in New Zealand, converting a valley into a Kashmiri village. 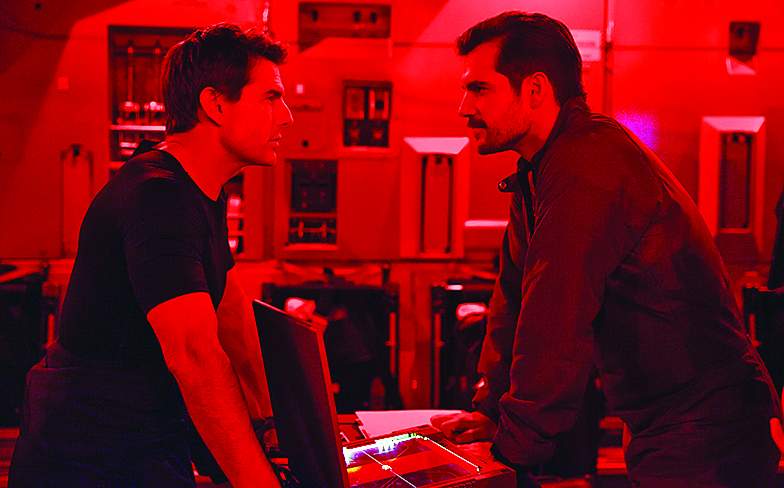 From the shrewd Jim Phelps in the first instalment to the ruthless Solomon Lane in Rogue Nation, the MI villains have always challenged Ethan to the limit, who had to use more of his brain than brawn to go one up. In Fallout, he faces a CIA assassin with killer hand-to-hand combat moves, played by ‘Superman’ Henry Cavill. Who’ll win? 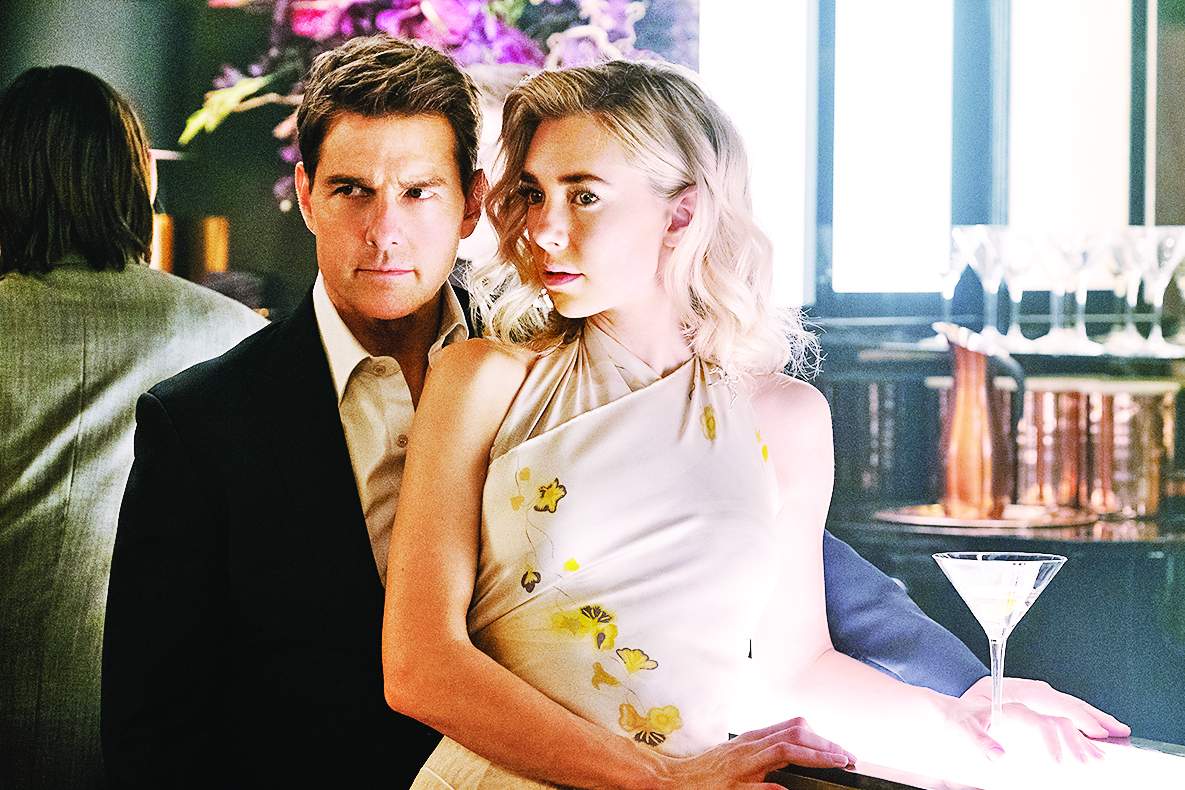 Mission: Impossible was the first movie that Tom Cruise had ever produced, and he has been one for all the subsequent movies. With the total budget touching $650 million and earnings overshooting $2.7 billion, it has become the 20th highest-grossing film series of all time. Fallout has been made with
a budget of around $150 million.

Cruising into the future 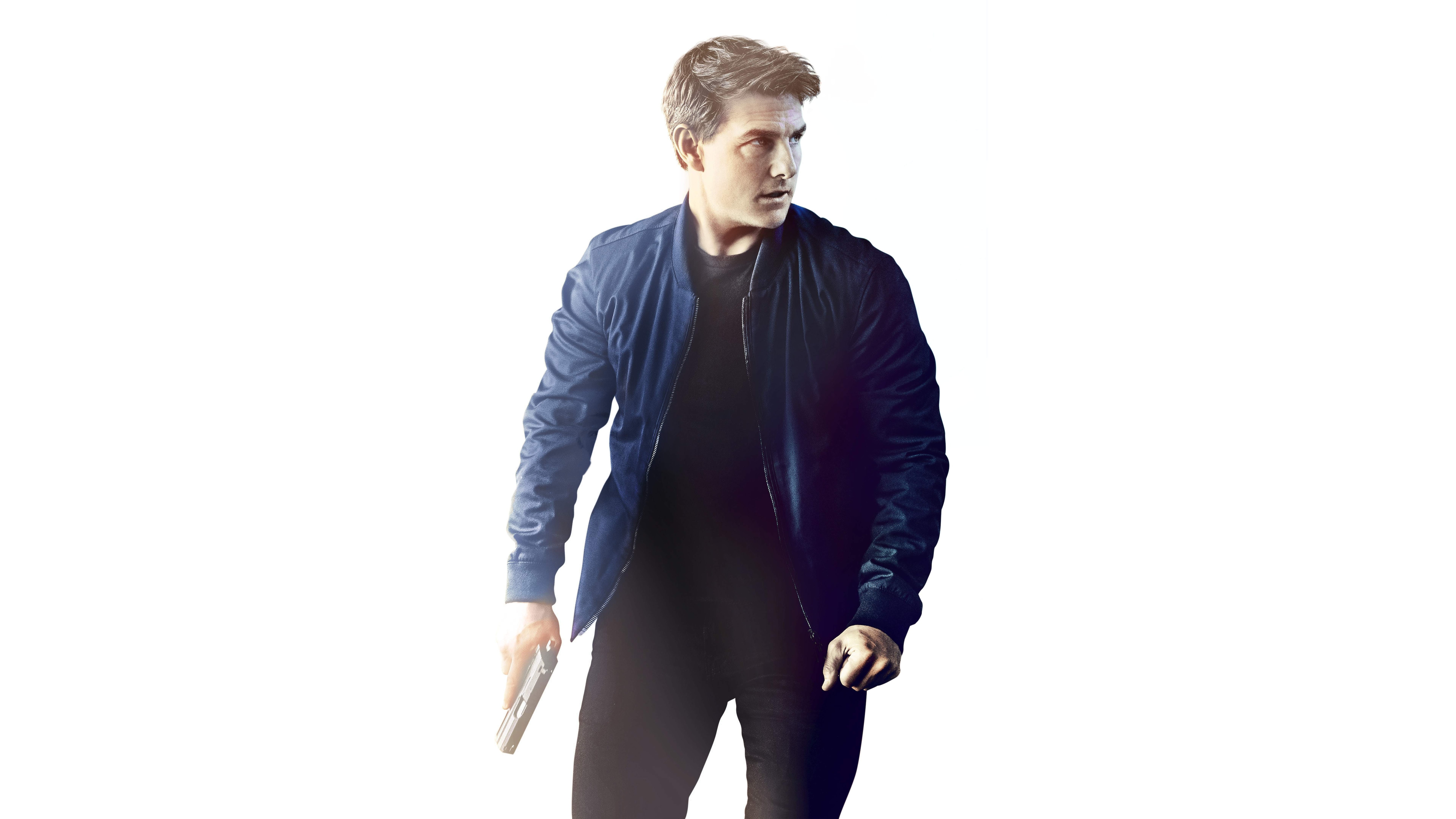 Tom has a slew of heavyweight releases scheduled after Fallout, starting with Luna Park, directed by Doug Liman (who cast Tom in Edge of Tomorrow and American Made). There’s also chatter about
a second EoT movie, directed by Doug again. All of these will be followed by Top Gun: Maverick, directed by Joseph Kosinski.