Atul Kasbekar, Francesca Lavazza and others talk about the making of their iconic calendars for 2021

What can one say about 2020 that hasn’t been said already? In the words of Taylor Swift, it’s best to ‘shake it off’ and step into 2021 with renewed hope. As we start a fresh new journey around the sun, we take a look at some of the most iconic calendars, from the Kingfisher Calendar by Atul Kasbekar to The New Humanity calendar by Lavazza, and get them to tell us about their experience conceptualising and creating them year after year, and the message they hope to spread. 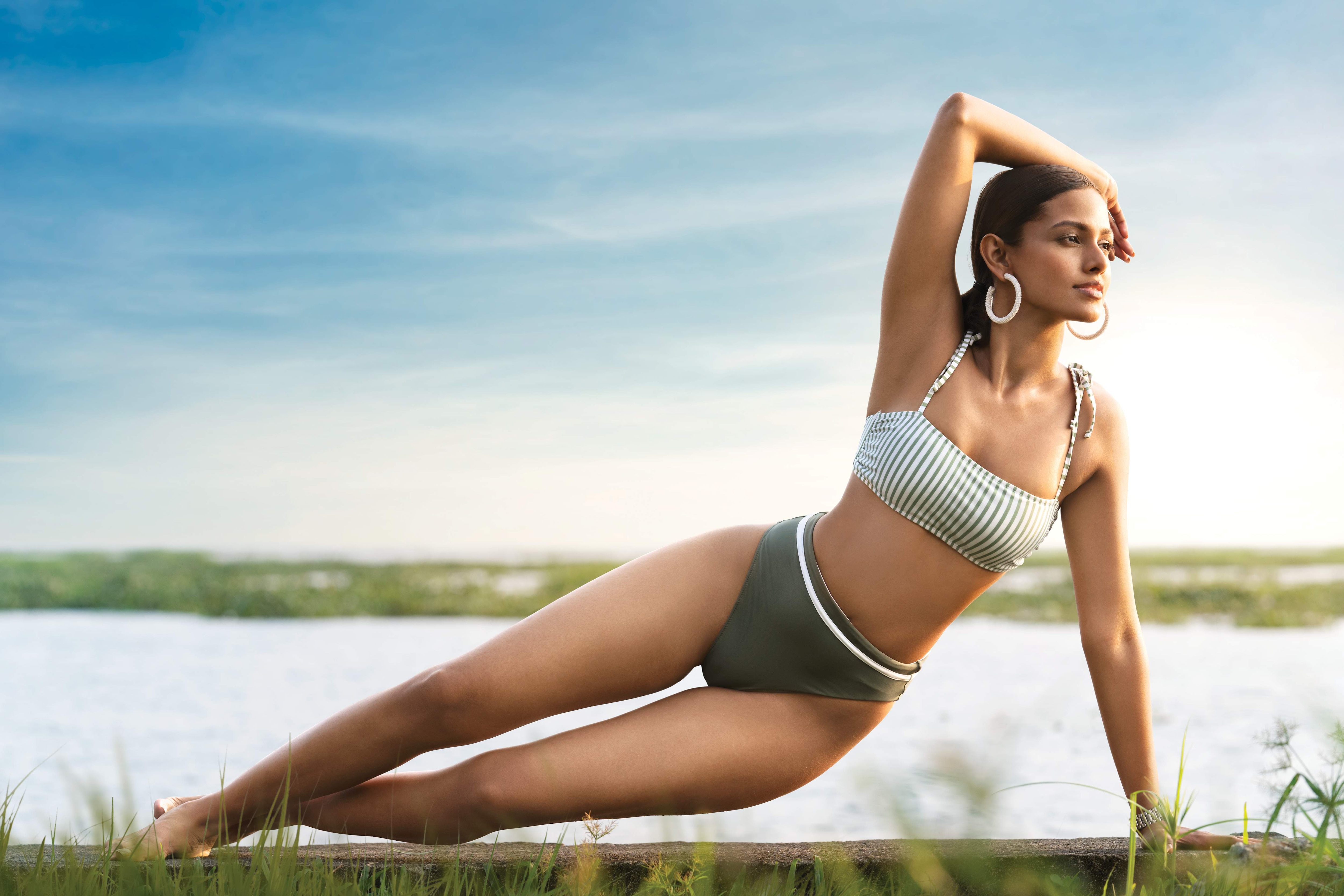 Kingfisher Calendar
Inspired by the places where it was shot — the beaches and backwaters of Kerala — the Kingfisher calendar for 2021 is no different than any of its previous 18 editions. As always, it delivers on glamour, beauty and is testament to the extraordinary skills of celebrated photographer Atul Kasbekar. “I have visited Kerala many times but never in a professional capacity. Therefore, I was thrilled and the entire journey of shooting the calendar in ‘God’s own country’ was an absolute delight. The dancing shadows of the meandering water bodies, the lush emerald greenery, the wonderful hotels and the amiable people made this place the perfect choice for the 2021 calendar,” shares Atul. However, given the current situation, a lot of measures needed to be taken to ensure safety. “We worked in a relative bubble where no one was allowed to go outside of the hotel and meals were strictly monitored at closed-off buffet areas. The wearing of masks was mandatory at all times, as was social distancing,” he reveals.

The calendar is graced by five models — Gehna Mahiarya, Krithika Babu, Adline Castelino, Sumita Bhandari and Anukreethy Vas — all handpicked by Atul, who explains that while choosing the models, he was looking at their fitness and confidence more than anything else. “It is a myth that you need to be skinny. What you need to be is extremely fit and athletic. I particularly think that a body that has been trained through yoga and pilates lends itself to be in the best possible shape for a swimsuit image. And at the end of the day, it’s also about confidence,” he says. 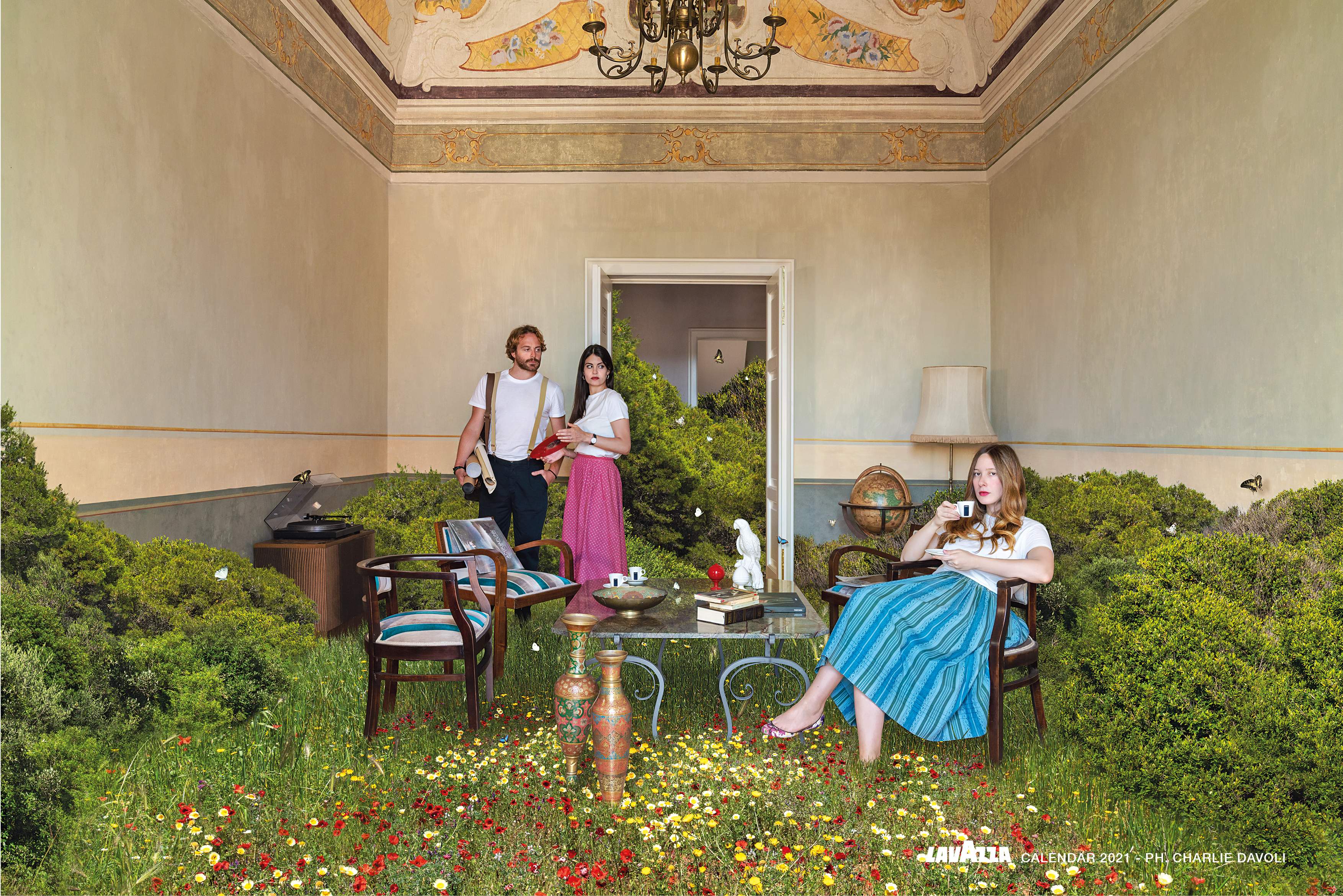 What is your idea of humanity? This was the question put to 13 photographers and artists to create The New Humanity, the 2021 calendar by Lavazza, the iconic 130-year-old family-run coffee company with origins in Turin, Italy. For Italy-based photographer Charlie Davoli, the answer was a surreal representation or response to the ongoing pandemic, where models are pictured in a lush, manicured garden located inside a narrow room, and for Martha Cooper, an American photojournalist, it was a collage of pictures taken from the exact same spot, of a street below, capturing people from different cross sections of society. A few other examples include a child wearing a nurse’s hat looking out the window of a car, a crush of vibrantly dressed dancers underwater — almost like a Baroque painting, and an older man covered in roots and branches to signify a return to simpler times. “For Lavazza, The New Humanity represents not only a new narrative direction, but also an artistic vanguard. The origins of the 2021 Lavazza calendar are very close, because the concept was devised and decided on at a very particular time, from an emotional perspective too: the March lockdown,” says Francesca Lavazza. “Around us, we wanted the people from the Lavazza universe and beyond, and together we worked to inspire suggestions, themes and ideas that can convey the sense of a new humanity,” she adds. This is the 29th edition of the calendar, and for the first time, Lavazza has decided to donate part of the proceeds to Save the Children, an India-based NGO. 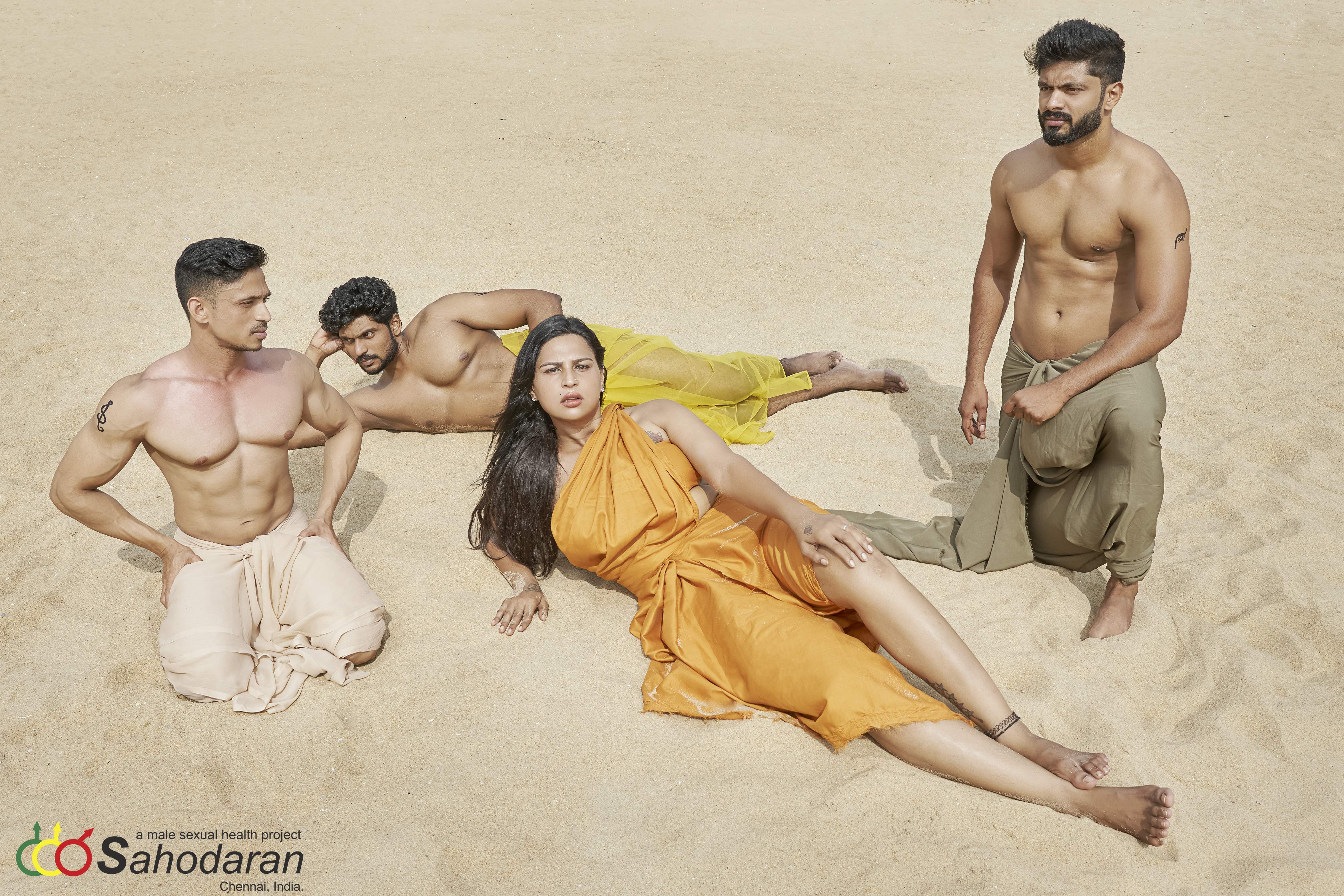 For 12 years now, Sunil Menon of Sahodaran, a Chennai-based non-profit which supports the LGBTQ community, has been bringing out a calendar celebrating various aspects of nature and mythology. This time around, Sunil has gone with the theme ‘Earth’, directing focus to what has become of the planet. The images shift from freshly tilled red soil on his estate in Kerala to the calming green shades of paddy fields near his ancestral home. “Besides fighting for the rights of the LBTQ community, I’m also an environmentalist. I thought ‘earth’ was an apt theme for this year, considering the situation we find ourselves in,” says Sunil, who confesses that the calendar almost didn’t happen. “With everything that was going on, I was not very sure of creating it this year. But I thought we could still pull it off with the necessary safety precautions in place,” he shares. The number of models were pared down to the bare minimum, as was the calendar itself. “It is a brief and small scale version of our earlier calendars,” explains Sunil. As always, the models, says Sunil, are dark-skinned and unconventionally attractive, and dressed in draped garments in muted shades. While the majority of the models are male, one transgender female model and one female model are also featured. “Last year, I broke away from tradition and included a female and a trangender model, so this year, I wanted to continue that,” he tells us. One of the most striking images is of model Mekha Rajan clothed in a brick red sari, sitting on red soil. “I wanted the photographer to capture her as a representation of ‘mother earth’ and it turned out beautifully,” he shares, adding, “I started this calendar because I really needed the money to run Sahodaran. Over the years, it has also become a creative outlet for me and a way to share a larger message.” 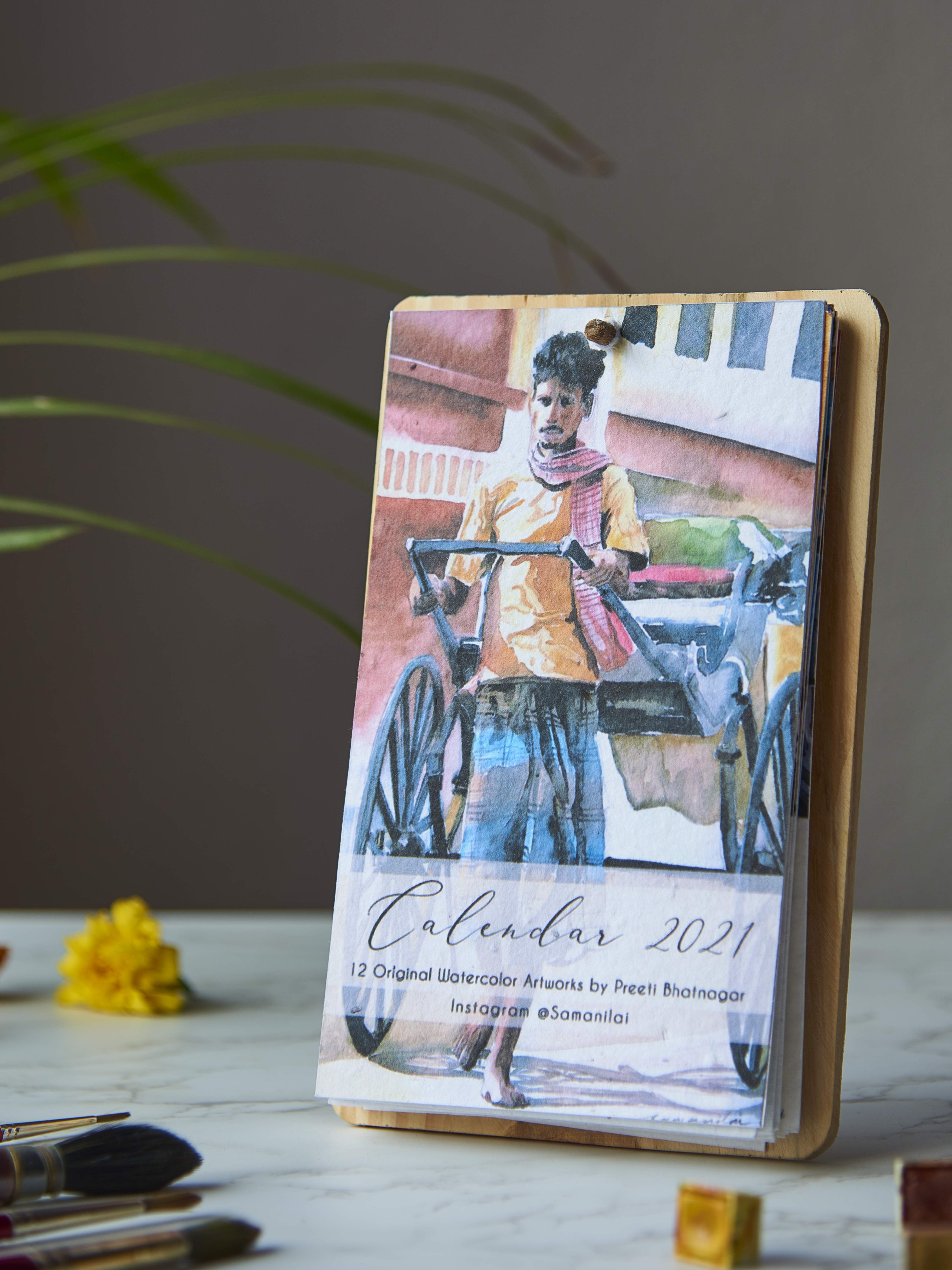 Old calendars are mostly thrown out and end up in landfills, something that Preeti Bhatnagar wanted to change. With this in mind, the Agra-based artist and architect with a focus on alternative sustainable practices and zero waste, thought about making calendars that can be planted. So she tied up with Plantables, who make seed paper stationery, which is essentially eco-conscious paper created from waste cotton scraps which are embedded with seeds of flowers, herbs, and vegetables. At the end of each month, all one needs to do is moisten the sheet and place it under a layer of soil to watch it sprout. Called Faces and Places, the calendar features Preeti’s watercolour paintings, which she did over the past year. “It’s called Faces and Places because the paintings are of people at work, from a Rajasthani embroiderer to Masai warriors, and places and monuments that are close to my heart,” says Preeti, a self-taught artist who started painting when she moved to Agra from Delhi three years ago. The calendar, which has a reusable pine wood spine, features 13 illustrations, one for each month and one on the cover. “My favourite painting is the one on the cover, which is of a rickshaw puller in Kolkata. I painted it after I read City Of Joy by Dominique Lapierre during the lockdown. I was moved by the book and then decided to create a painting inspired by it,” she shares