These Bengalureans are advocating for social change through the powerful medium of music, paintings and theatre

Baadal Nanjundaswamy
Last month visual artist Baadal released a video where he was dressed as an astronaut walking on the craters of the moon, just before the Chandrayaan-2 landing. The video was actually shot on the streets of Bengaluru and was a satirical take on how bad the potholes in the city are. With a cheeky, “Hello BBMP” caption, the video went viral and was re-created by artists across the globe. “Art connects everyone, especially in today’s era of social media,” Baadal opines. Through his previous works such as a replica of a crocodile on a puddle, or powerful political graffiti, Baadal has become the poster boy for protest art in the city.

“From my days in college, I have always communicated my views and responded to society’s issues through art. Several years ago,while I was riding back home late at night after work, I met with a minor accident due to dysfunctional road dividers. When I wanted to communicate these issues, the only language I knew was visual. This led me to create art to bring attention to civic issues and to highlight
the urgency to fix them,” says the Mysuru-born artist.

And his protests have not been in vain. “Authorities have always responded almost immediately. Meanwhile, my art also inspires civilians. Recently, my artwork Moonwalk was replicated by many all over the world, which led to the fixing of many local potholes,” he adds. Baadal may have faced opposition or resistance because of the nature of his work, but it has never stopped him. “There are always people who don’t understand art,” he answers wisely.

Sandbox Collective
Shiva Pathak firmly believes that art should be accessible to all. As the co-founder of Sandbox Collective, she asks, “Why should a child in a government school not have access to a theatre space or a play?” In 2015, the collective premiered its play How Cow Now Cow at the Hulimavu Government School. 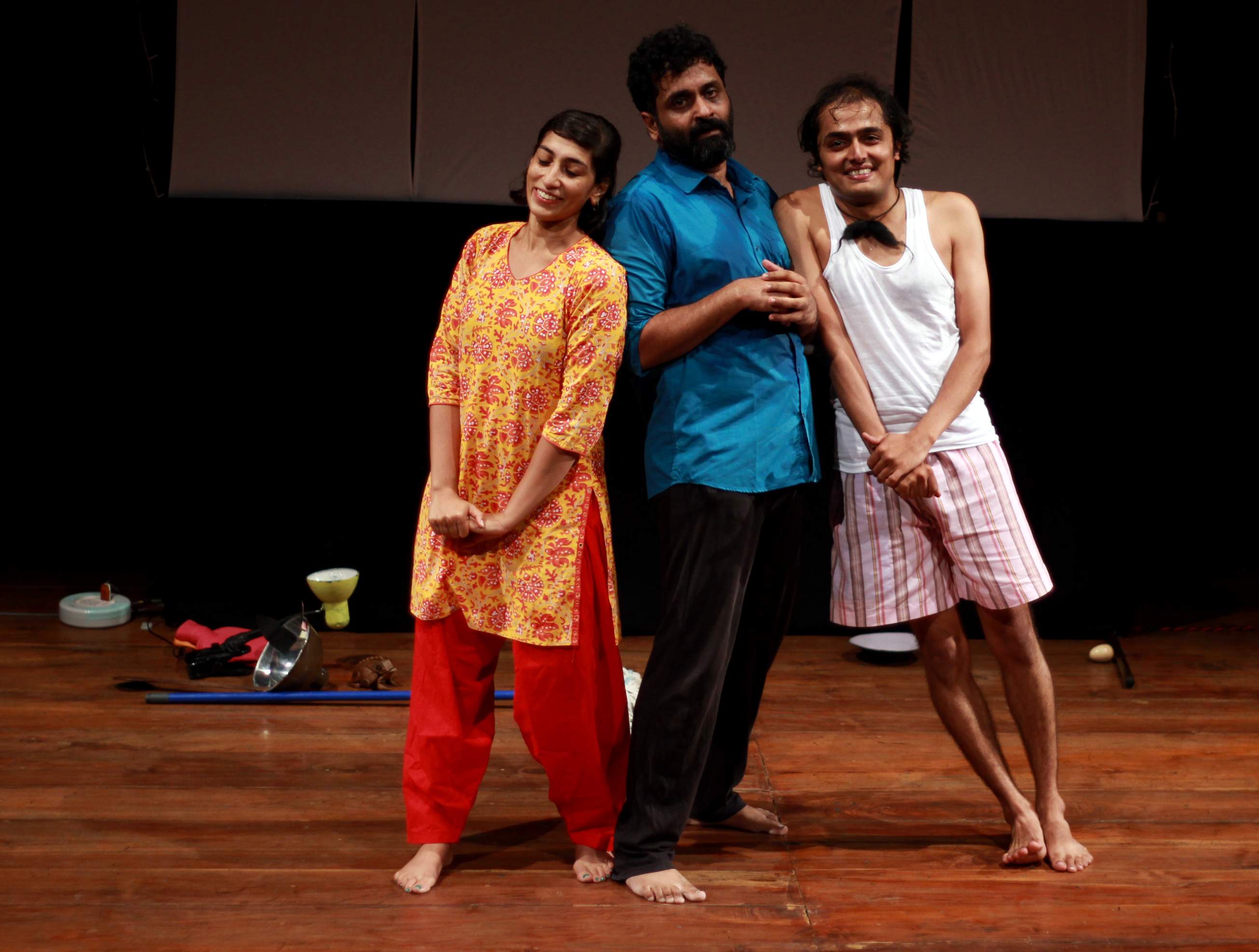 “Over the next few years, we translated the play into Kannada and performed in government schools at Sampigehalli, Ramagondanahalli and Nallurahalli, and homes like Shishu Mandir and Sneha Jyothi orphanage. Some of the NGOs we have collaborated with are Concern India, Magic Bus, Teach for India and Rotary Club,” she tells us. For its newest play, 1..2..Tree, that addresses environmental issues, the collective has tied up with various NGOs so that the children attending the shows can also know more about practical and small things that can make a difference to the environment. “By performing for these children, the aim is not to just educate them. The hope is to help them be children for that one hour. They don’t come from privileged homes, and their childhood is not the stuff of fairy tales. All we hope to do is capture their imagination for that one hour when they think of nothing else but what is unfolding in front of them to encourage them to dream,” she signs off.

BYOH, Swarathma
The idea for the BYOH (Bring Your Own Happiness) initiative by the city-based band, Swarathma, was born out of concerts it did in a few villages and an Alzheimer’s centre. “Over the years, we have played
several such concerts, but we realised their value and beauty recently.  Thus, we started BYOH — a series going beyond the arc lights of fancy concerts and giving back to the community,” Jishnu Dasgupta, bassist and vocalist of the band, shares. 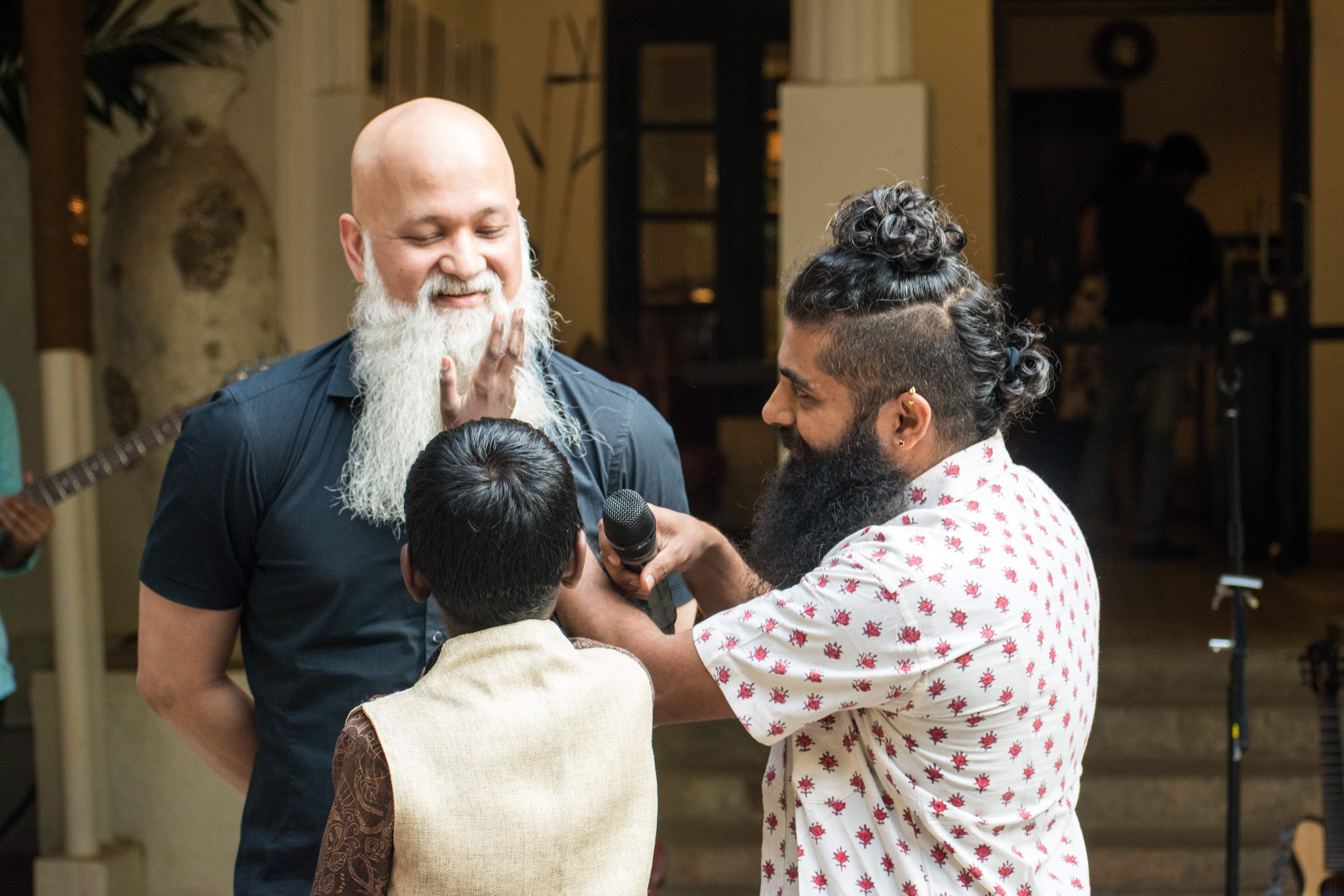 As part of this ongoing initiative, the band has performed at the Karnataka Welfare Association for the Blind, Children’s Ward of the Kidwai Memorial Cancer Hospital and Nightingales Center for Elders’ Enrichment. “We gained far more love than we gave,” Jishnu adds. Many of the audience members had never watched a band perform before and it was wonderful for the band to be able to share its music with them. This is not the first time that the band has taken up a cause. It has been associated with the movement against plastic, the stir against the proposal to axe the trees at Indira Nagar BDA complex, and the Steel Flyover Beda protest. “We don’t see ourselves as revolutionaries. We don’t know all the answers. But we do feel strongly about the world and respond in the language of music,” Jishnu sums up.

Aravani Art Project
Every year the town of Koovagam, Tamil Nadu celebrates a festival in honour of Lord Aravan from the Mahabharata, a patron god of the transgender community. Taking inspiration from this, city-based artist and muralist Poornima Sukumar, started the Aravani Art Project — a women and trans-women art collective that uses public art to raise awareness and create safe spaces. “The project has been nothing short of a dream. Our work has been unique, beautiful, powerful and so simple in its own way,” she tells us. 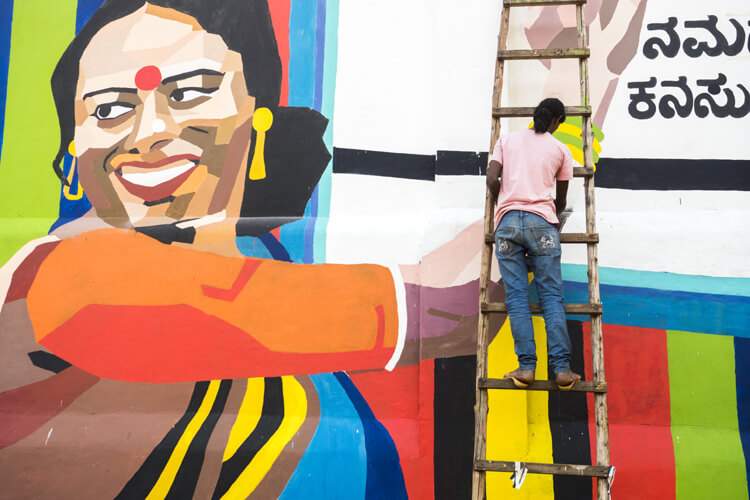 With over 40 projects under their belt, the project, since its inception in early 2016, has been championing this cause by using trans-people and gender fluid artists to paint their street art. Their bold coloured murals at IIHS, Freedom Park, Dhanvantri Road and KR Market are hard to miss. Apart from Bengaluru, their art can also be seen in Colombo in Sri Lanka, Dharavi in Mumbai and Thiruvanmiyur Railway Station in Chennai. The design for each image is put together after research into stories from the community and the area’s local culture. Poornima notes that the challenge of bringing the community out to paint on the streets is not an easy one. “It has been the most challenging in terms of sustaining mutual trust within the community. Acceptance, inclusivity, respect and friendship continue to be our pillars of work and strength,” Poornima says.

Project  Fresh Start
16-year-old Nikita Nambiar saw her grandmother take up Tanjore art to stay occupied and mentally active in her old age. “I noticed the sense of accomplishment it gave her,” she tells us. Combining this thought with her desire to help the community,  the student from The International School Bangalore started Project Fresh Start. The project trains female convicts in jails to make Tanjore and Kerala mural paintings. “Once we decide on the art form that they will be trained in, we explain the techniques to them. Those interested are provided with the materials, and attend classes thrice a week. They spend their free time working on something that occupies their mind and it provides an escape and relief from suffering, loneliness and depression,” she explains. Once completed, the art is exhibited at various events and also sold on their online store (theprojectfreshstart.com). “Nobody is just the crime they have committed. They are much more than the worst thing they have done. People in prison are part of our society, and we have a powerful stake in their  success,” she concludes.