Crises like these are shifting points for societies: Rutger Bregman on the pandemic

Historian and author Rutger Bregman made global waves at the World Economic Forum in Davos last year when he called out the global elite for not acknowledging the realities of wealth inequality. In his newest book, ‘Humankind, A Hopeful History,’ he explores some of the world's most significant studies and reframes them, to offer a new perspective on the last 200,000 years of human history.

“Elites get nervous when people come together. Cynicism is a legitimisation of hierarchy, it’s the tool of the powerful where they can say, ‘you need us, you can’t trust each other.’ But if you can trust each other and work together, they get really nervous,” Bregman tells journalist Kaveree Bamzai during the recent session of e-expressions. Here are some excerpts from the interview:

What has been the reaction to ‘A Hopeful History’?

I’m an old fashioned social democrat, I think a civilised society should have universal healthcare, accessible for everyone, public education paid for by the state, universal basic income, I think all these things are investments. We have extraordinary amounts of research that show that once you get people out of poverty, and they can go to hospital when they really need it, you get a return on that investment, you have to spend less on healthcare and corruption etc.

I think many people are looking for sources of hope and historians have long known that crises like these are shifting points for society and it can go in many directions. If you would have told anyone ten years ago that a sixteen year old Swedish girl would kickstart this huge global climate justice movement, or that we would see the biggest protest in the history of the United States, it would have been unimaginable. There’s a very long way to go, and there are reasons to be anxious and fearful, but there’s hope as well.

Can you look at social media today and still feel hopeful?

The first thing you have to recognise is that the news and social media are the biggest addictions of our times. The news is about things that go wrong, about corruption, about crises, terrorism, violence and war. If you watch a lot of news, at the end of the day you’ve only heard about the exceptions, exactly how the world does not work. I think it’s good to plug out a little.

In social media, algorithms want our attention so they can sell us as many ads as possible, they do that with outrage, they want you to be outraged all the time. The news and social media often increases the distance between people, psychologists have always known that distance is the root of all evil. It’s quite hard to hate someone who is standing right in front of you, a human being you can look in the eye. It’s much easier to hate someone who’s behind an anonymous account, we have to try and find ways to bring people together for face-to-face contact.

What makes us not accept an idea like universal basic income that is clearly so good for us?

There’s so much to say about that. In fact, my previous book was about basic income. I try to give all that scientific evidence that really works. So much evidence that points out that once you give people some venture capital to do something in their lives they can use that money well, to find jobs, maybe start companies. But people don’t believe in it very often because they have a darker view of human nature. At that point I realised that I needed to dig a little deeper and talk about who we are as a species. If you look at the latest evidence we have from archeology, sociology or anthropology, you’ll find a mixed view of who we are. 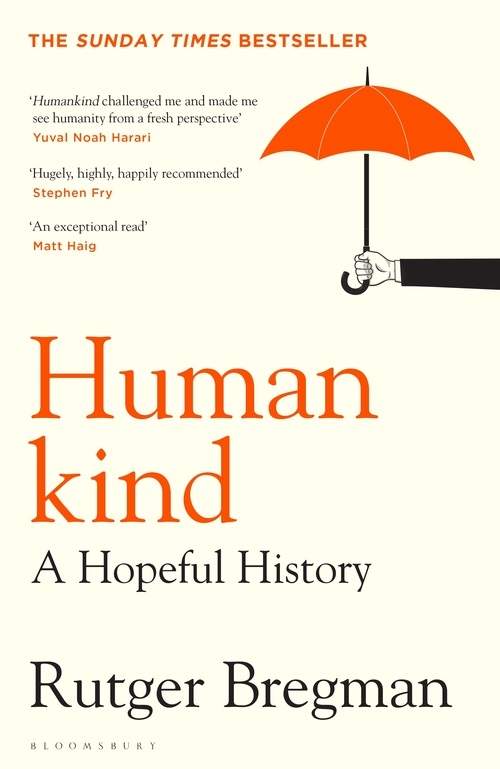 On one hand, we are the friendliest species, we are able to co-operate at a skill that no other animal can and biologists even talk about survival of the friendliest. But we also know about the dark side of this, where friendliness can turn into followership, or groupishness where you actually start doing nasty things in the name of loyalty, that is at the heart of so many atrocities in human history.

People find it very hard to give up their privilege, they start thinking the world is zero-sum where for someone to get something, someone has to lose something. I think it’s important to think about win-wn, which is the idea behind social democracy. If we work together and invest in each other, we’ll all be better off.

Do you think the pandemic is a moment in our history which will change us fundamentally?

Maybe… Like I said, crises are shifting points for societies, they have been used by those in power throughout ages. It’s easy to imagine something like that happening again, there are also more hopeful signs. What we’ve seen in the past ten years is that ideas which used to be dismissed as highly unrealistic, have actually moved into the mainstream, at least from the western perspective. That makes me hopeful.

Climate changes is one of the examples. If we talk about racism, how many George Floyds have there been before George Floyd, their deaths didn’t cause massive protests; it was the biggest protest in American history, it had a global effect. It also had a really big effect in the Netherlands, our Prime Minister really seemed to recognise the issue for the first time, things like these give me hope.

One of the ironic things about progress is that once progress starts to happen, it feels like the opposite. Tax evasion, for example. Ten years ago, there was no discussion about this phenomenon where rich people have their armies of lawyers and accountants who basically try to make sure that these people have to pay as little as possible in taxes. There was no controversy, now it’s very different and many people think because it’s so much in the news, that it’s worse than what it used to be, but it is actually getting better, because we are angry about it. This is the paradox I address in my book, that because we are friendly, progress often starts with unfriendly people who are willing to go against the status quo, who are willing to make other people uncomfortable.

Globalisation hasn’t been all that good for us. Do you think we’ll become more protective in the coming days?

The problem is that when we talk of globalisation we talk about globalisation for elites, very rich people can travel around the globe in their private jets. But most people are stuck in their own country, and there we say ‘Oh, it’s a migrant crisis. They are coming to steal our jobs.’ I think there is a powerful argument to be made here that we should have proper real globalisation, not the system of global apartheid where we treat refugees like scum.

In the US elections could they possibly re-elect Trump despite his handling of race relations and his stance on women?

You have to recognise here that the United States isn’t a proper democracy anymore, the most positive term would be to call it an elected aristocracy so people are allowed to choose their own aristocrats from dynasties. From a European perspective that is already crazy, the whole notion that if the Prime Minister has a wife, or  a husband, that person would sort of succeed him or her, that’s ridiculous. A proper democracy is very different. And the other issue is that Clinton had three million more votes than Trump in 2016, that is the big difficulty. It’s better than a dictatorship, sure. But it’s simply not true that people are in charge. If you look at how the Greeks did it, two thousand years ago, that is the model. Not choosing your own aristocrat but becoming a politician yourself.

Explain Don’t Punch the Nazi for our readers...

There’s a certain kind of activism - this is something I learnt from my favourite author, Rebecca Solnit - she taught me that there’s a certain kind of activism which cares more about being on the right side of history than actually winning. I think this is often what happens with activists who like to punch Nazis and they don’t ask themselves if this is actually effective. I think it’s counter productive, you don’t have to be naive, you have to be realistic about the corruptive effects of power differences in this world. But in the book I give a couple of case studies where institutions lean in to the ‘other cheek’ approach with incredible success.