American electronic duo The Chainsmokers are in hot waters after they held a drive-in concert in Hamptons a few days back, which drew a large crowd and flouted all social distancing rules. The concert even drew the attention of NYC governor Andrew Cuomo who stated that the Department of Health will conduct an investigation about the gig. "I am at a loss as to how the Town of Southampton could have issued a permit for such an event, how they believed it was legal and not an obvious public health threat,” Dr. Howard Zucker, New York’s health commissioner, wrote in a letter. 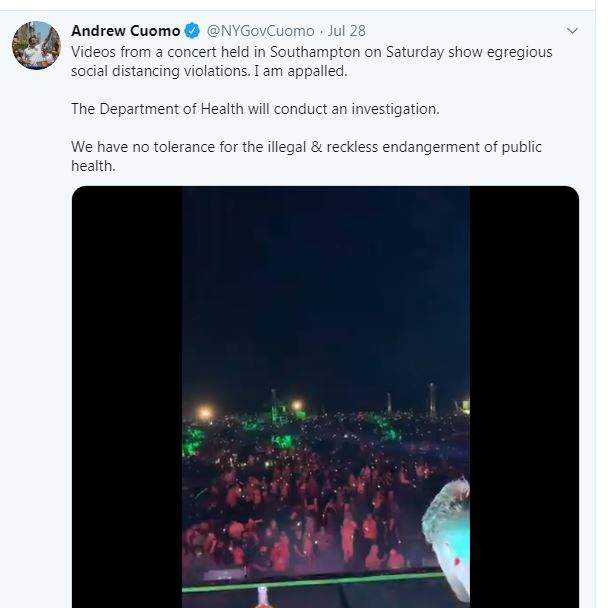 The Saturday concert was held in a 100-acre plot and was reportedly attended by thousands of people and around 600 cars were gathered. Reports suggest most concert goers abandoned their vehicles and started gathering together along the open grounds, and did not maintain social distancing. Though most of the people were wearing masks, videos which went viral on social media clearly shows people dancong in close proximity disregarding social distancing laws. In response to the severe backlash, In The Know Experiences and Invisible Noise, the label which hosted the gig, released a statement in which they tried to explain the rules which they enforced.

"The Safe & Sound drive-in concert fundraiser followed the guidelines created by the Centers for Disease Control and Prevention and made best efforts to ensure New York’s social distancing guidelines were properly maintained throughout the event. We collaborated with all state and local health officials to keep everyone safe, create awareness for local businesses, provide work to over 350 people who have been unemployed as a result of the pandemic and to bring some joy into people’s lives during these difficult times. The event also raised money for No Kid Hungry, Southampton Fresh Air Home and Children’s Medical Fund of New York. Prior to the event, all guests were instructed to self-monitor their temperature daily for two weeks leading up to the event, maintaining a temperature below 99.5° F (37.5° C). Additionally, they were asked to disclose if they tested positive for COVID-19 or if they were in contact with anyone who tested positive within the last two weeks," they stated.