The reminiscing of Satyajit Ray’s (1977) film Shatranj Ke Khilari are only to be expected at The Art of Chess, an exhibition of chessboards being co-hosted by Apparao Galleries, at the lifestyle store Cape Kamoryn on the ECR.

Make your best move
A few of the works go as far as to transform the game of chess into a sculptural piece, such as in Singh’s Me and Mine, which features twin kneeling players looking over a board that’s seemingly midway through a game — unlike the other sets, in which the pieces are neatly aligned in formation, like at the start of a game. Singh explains in a note, “To me, chess is like a battle of choices, where I’m unable to give up either. It is my own inner battle of family and career opportunities.”

The most conceptual works of the lot are by George K. For instance, in Strategy In The Essence, he places only white cubes of sugar on a chess board, all of the same size and colour — the only difference being in the flavouring essences dropped onto each cube, imparting a distinct smell and taste to each piece.

In Survival Games, he employs sweets and chocolates to imply victors and vanquished opponents, referencing the machinations of contemporary politics in India. “This is real, real-time chess of politics,” says the artist in a note, about the work.

In another piece, titled A Diagnostic Chess, George compares the game of chess to a medical diagnosis, in terms of pattern recognition, alternatives and strategies.

Coloured red and black, the pawns on this board serve to demarcate ground realities of the poor and the affluent, making a hard-hitting statement about global concerns over controllable diseases, and monopolised drug prices.

Dhasan offers an alternative use of paper, as a commentary on ideas of ‘good news’ versus ‘censored news’, in his work titled An Objective View, while Janarthanan draws inspiration from nests for his creation, titled Construction.

Much like his mixed media collages, N Ramachandran too derives inspiration from newspapers for his piece, Good, Bad and the Ugly, which he presents as more of an artwork than a functioning chess set. 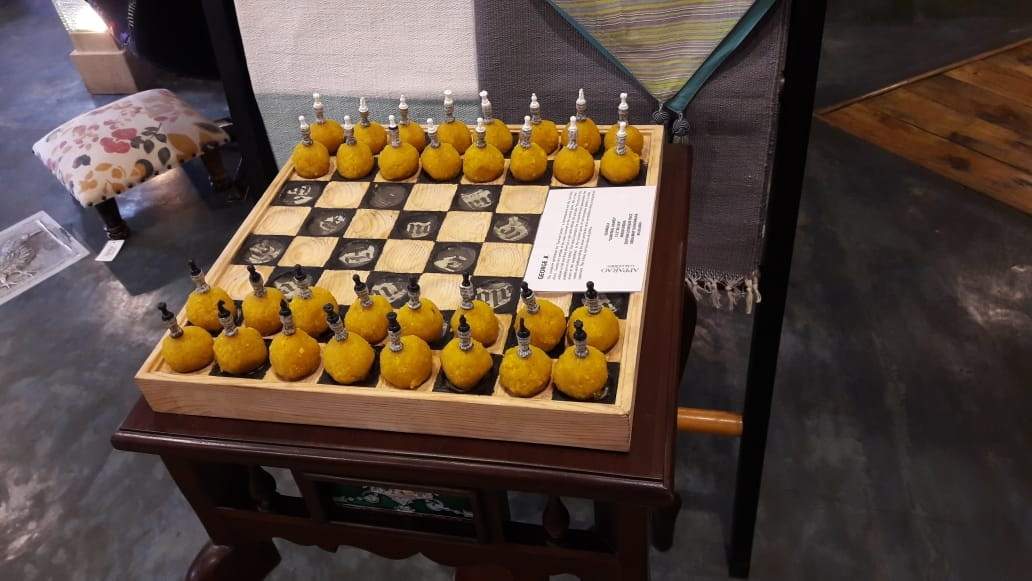 Gautam Bhatia takes the paradigm of politics a step further in his work, Chess Minister, by emphasising the hierarchy on his chess board, using a standard symbol of a minister as a model for each piece, where the girth of each minister increases with importance in the order of play.

Prasanna Kumar Nagarajan strikes a comparison between the pen and the sword in his rendition, Battlefield 2, while the more intricate and complex works on display include Uma Shankar Pathak's Gamesmanship, Bhavna Sonawane’s Chaturanga and Mainaz Bano’s Golden Heritage 56.

By the end of it all, you’d do well to find a comfy spot to settle into, and mull over those visions of a contemplative Saeed Jaffrey and a paan-spewing Amjad Khan as an ennobled overlord and the benevolent Wajid Ali Shah in exile, hunched tirelessly over a board of chess.

On display at Cape Kamoryn, ECR, until December 31.