This Bengaluru-based textile expert set up The Registry of Sarees early last year, with the idea of building a repository of beautiful saris, creating awareness and getting people to talk about the Indian garment. Over the course of 2016, Khausalya, along with co-founders Ally Mathan and Apoorva Sadanand, brought in weavers from small pockets of Karnataka, Tamil Na du, Andhra Pradesh and beyond to Bengaluru, to showcase their intricate works. Last year, the ancient weave of patteda anchu from Gajendragad, in Gadag District of Karnataka, found its moment in the sun, as the collective commissioned four looms to craft 25 saris each. “It’s a weave that goes back 350 years. The checked cotton sari was offered to the gods every time a woman in the family got married,” explains Khausalya. For Sankranthi, they plan to release a collection of Simhasana silk saris from Molakalmuru, a panchayat town in Chitradurga district. “It is inspired by the cloth that was used to cover the throne of the maharajas. What makes it special is its three-shuttle weave. The contrasting extra weft gives it its distinct design,” says Khausalya. Also in the pipeline is a range of Gollabama saris from Siddipet, known for its signature weave depicting women carrying pots on their heads. “We’ve received the first sample and will start getting them woven soon,” she says. Rs3,450 upwards. Details: theregistryofsarees.com

Ron Dutta
From working with weavers in tribal areas to dressing the likes of Kalki Koechlin and Vidya Balan, Bengaluru-based Ron Dutta’s story is full of surprises. Having kicked off his career as a stylist for Myntra, Ron set up Fatherl 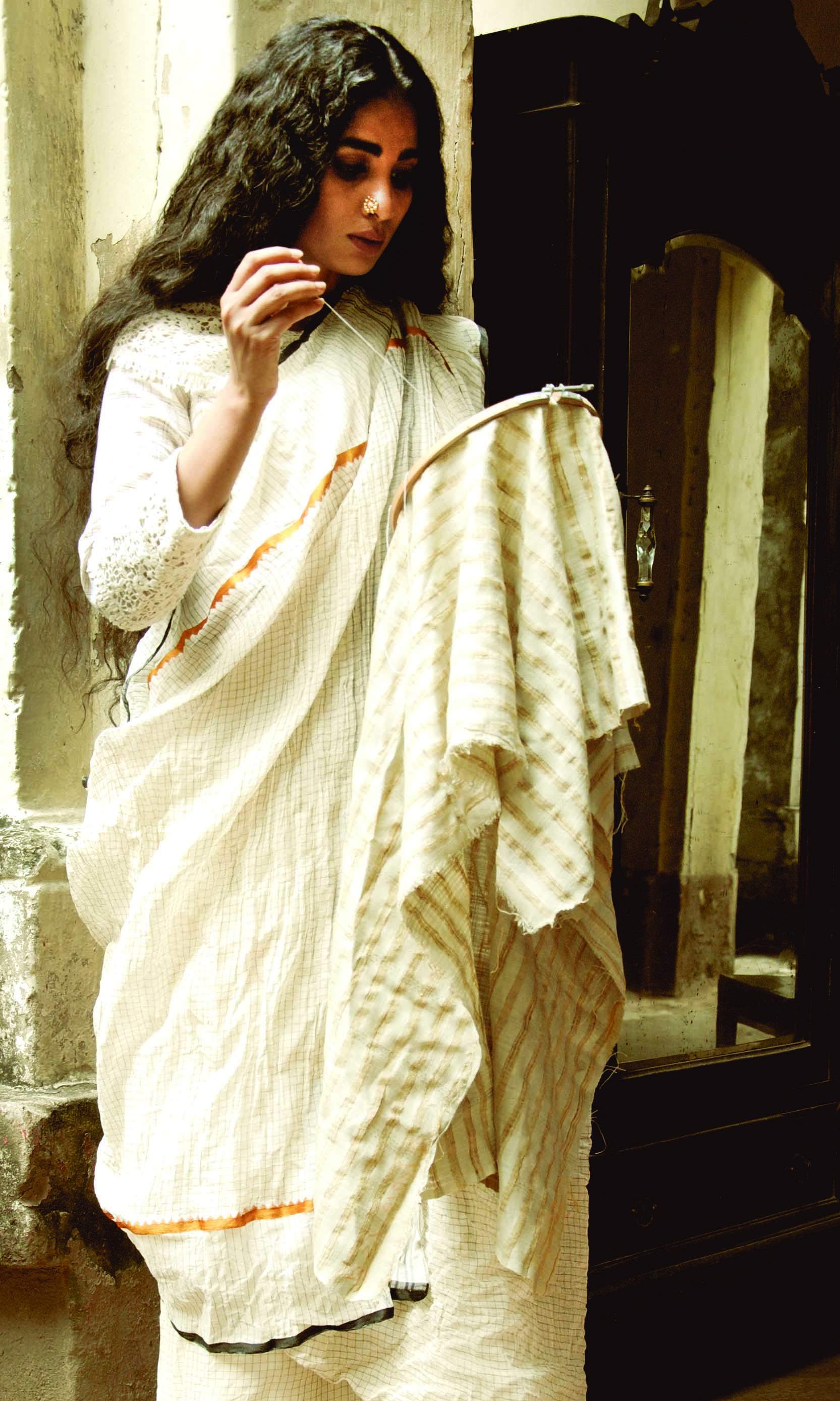 and as a jewellery label in 2012. But, as he puts it, “I’ve always had one foot in the past.” So he went to work on ancient ‘unsung’ weaves from remote villages in West Bengal, Orissa and South India. Ron is known for his work with the humble Dhaniakhali — a weave from Bengal that he describes as more durable than Bengal cotton. “It is woven by a dwindling group of highly skilled artisans, which makes it all the more special,” offers Ron. He first used it in 2015, as part of his collection, Sabeki. Crafted from de-starched soft yarns, 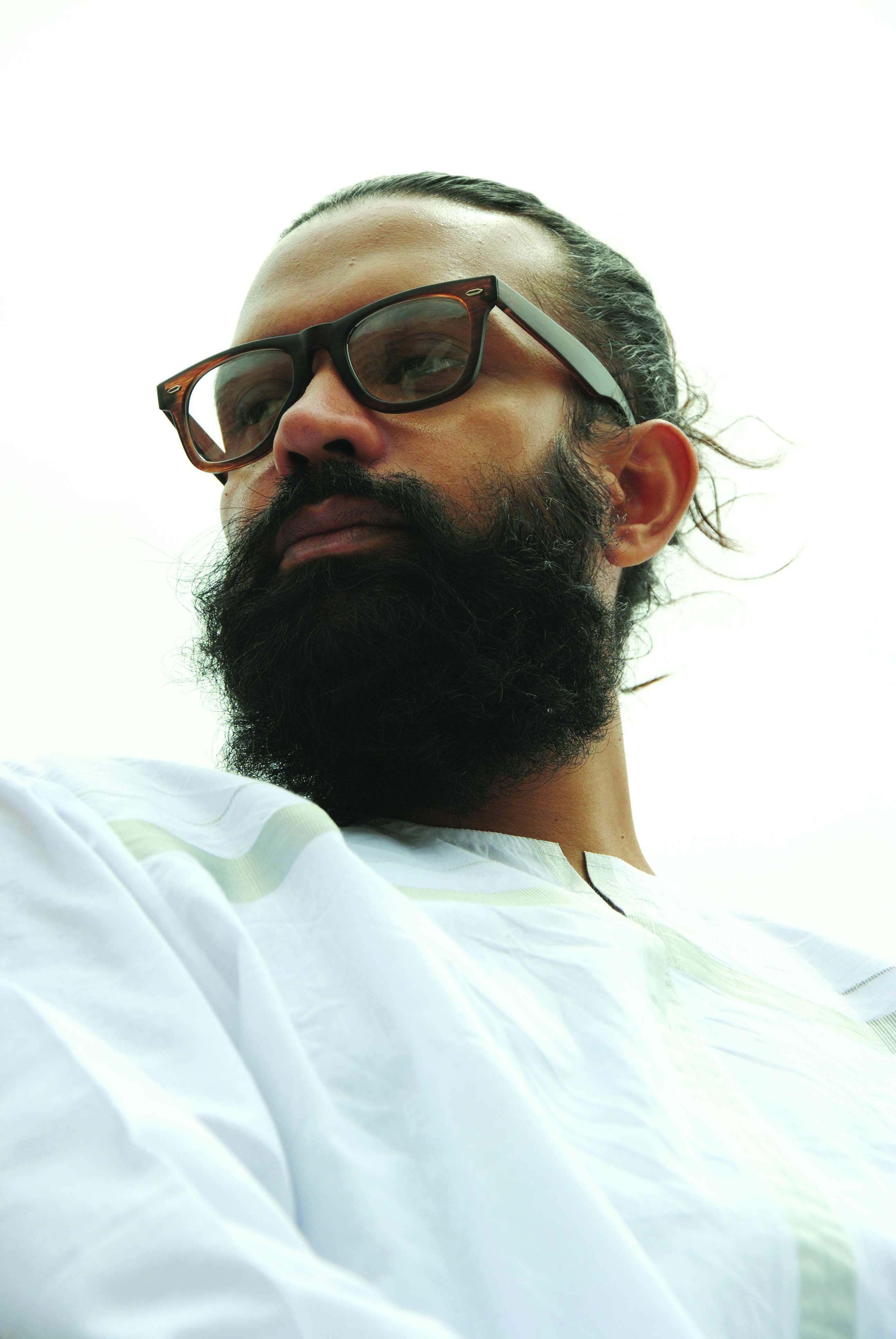 the fall of the fabric imitates that of mulmul. In 2016, he roped in Kalki to model his line, Jnanada, inspired by Jnanadanandini Devi, the sister-in-law of Rabindranath Tagore. This line too saw the extensive use of Dhaniakhali, with light pastel hues and an over-laundered, crushed look lending it added femininity and softness. This year, he launched Cadence — a mix of white and wine shades, stripes and chevron patterns on Dhaniakhali and mulmul cotton. He also hopes to work more with the Kornad (Tamil Nadu) and Kotpad (Odisha) weaves.Rs3,250 upwards. Details: fatherland.in

few others. Yet, this revivalist believes there is always more to look forward to. While most designers are thinking up ways to make traditional weaves ramp-ready, the Chennai-based conservationalist says, “Handwoven textile first needs to be available to Indians, before we can think of making it a global brand.” Closely associated with various weaving communities, Arundathi speaks of an Indie renaissance. As weavers send their children to design schools, traditional fabrics and motifs are changing, but the techniques remain the same, she explains. “These children grew up watching their parents. Weaving is in their blood, it comes to them instinctively.” Currently working with weavers from Chhattisgarh, Bhagalpur and West Bengal, the former owner of the boutique Shilpi, says the newer crop of weaver-designers is bringing in a novel perspective. “It’s a completely fresh look. Things you’d have never thought of, like a grey and white sari with a canary yellow pallu or a turquoise blue sari with a moss-green pallu,” she offers, enthusiastically. Having worked extensively with Bengali weaves, embroidery and block prints, Pochampally ikats of Andhra, Gota patti work of Rajasthan and the ikats of Odisha, Arundathi is leaving the revival of Kanjeevaram silks to retailers. “The state-run Co-optex deserves praise for bringing back ancient varieties like Kandangi, Sungud and Koorai Nadu,” she says. Rs2,180 onwards for cottons, Rs3,550 for silks. At Samasta. Details: 044 24472855 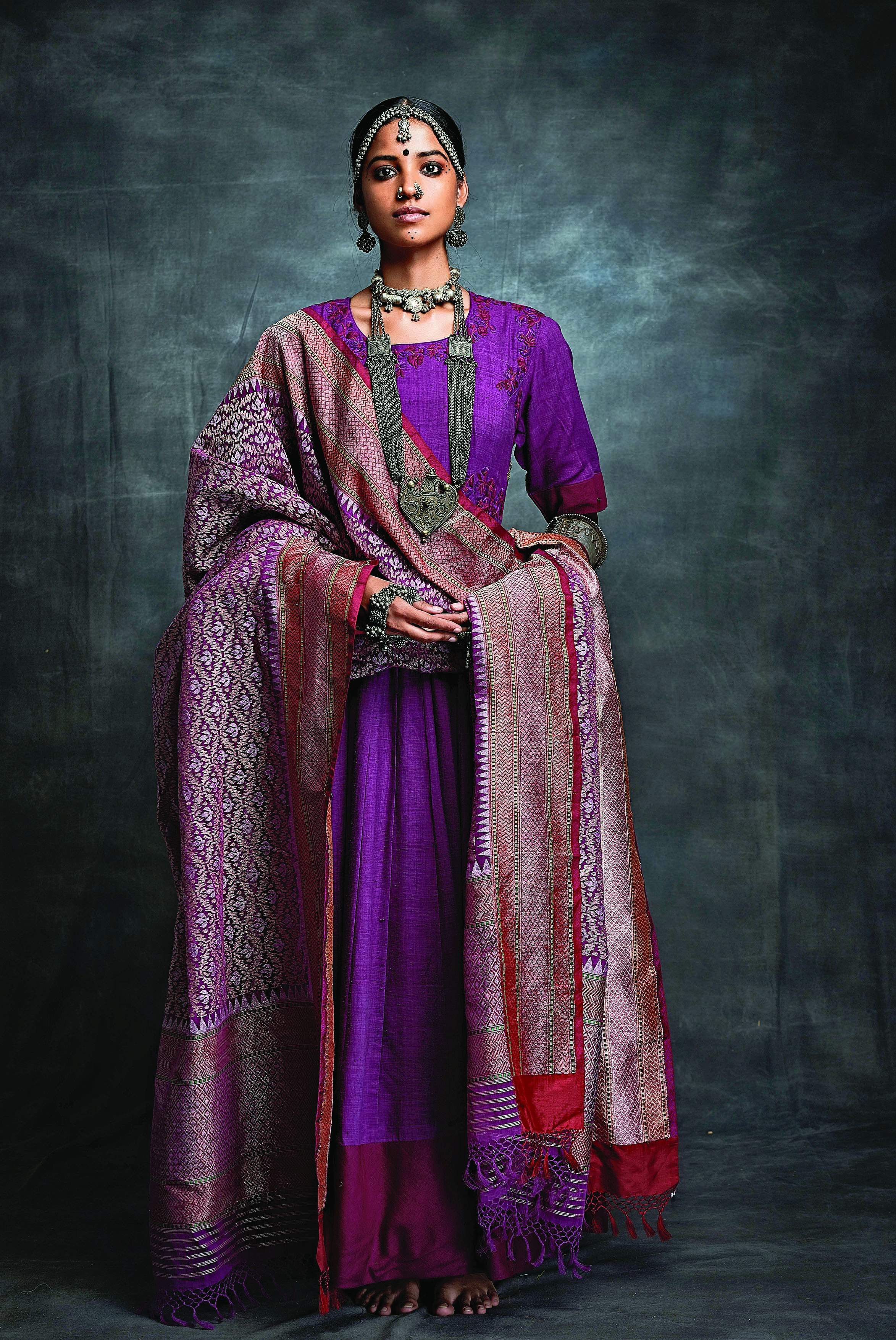 eaves back in vogue. From bridal couture to wardrobe classics, his saris speak volumes about the versatility that Indian weaves can be moulded in. “I work with Jamdani in khadi, Uppada, Paithani, Benarasi, Kota, Dhakai and Korvai weaves in Kanjeevaram, and double ikat in patan patola,” says the designer. The process of incorporating handwoven fabrics has not always been easy. “It was difficult to convince the weavers initially to do something new, to experiment with designs, colours and textures. But now they look forward to inn

ovations and are keen to experiment continuously. I have managed to get them excited and engaged them with designs that challenge their skills as well,” says the designer, whose clientele includes B-town A-listers like Vidya Balan. The revivalist explains, “My strength is weaves, textiles, colours and textures. And my passion lies in preserving our textile heritage and handlooms.” Shah has incorporated lesser-known weaves and techniques in his design. “For instance, I worked with ikat in Kanjeevaram, and traditional telia rumal in different textures,” informs the textile designer, who believes in “consistent innovation” as far as local weaves and weavers are concerned. Rs2,500 upwards. Details: 040 66666476

Cuckoo Parameshwaran
WHILE the ubiquitous Kaithari and cream Kasavu sari are the calling cards of the state’s fashion identity, this designer has gained a reputation for promoting indigenous textile weaves and breaking fabric stereotypes. Experimenting with weaves traditionally used for furnishing, Kochi 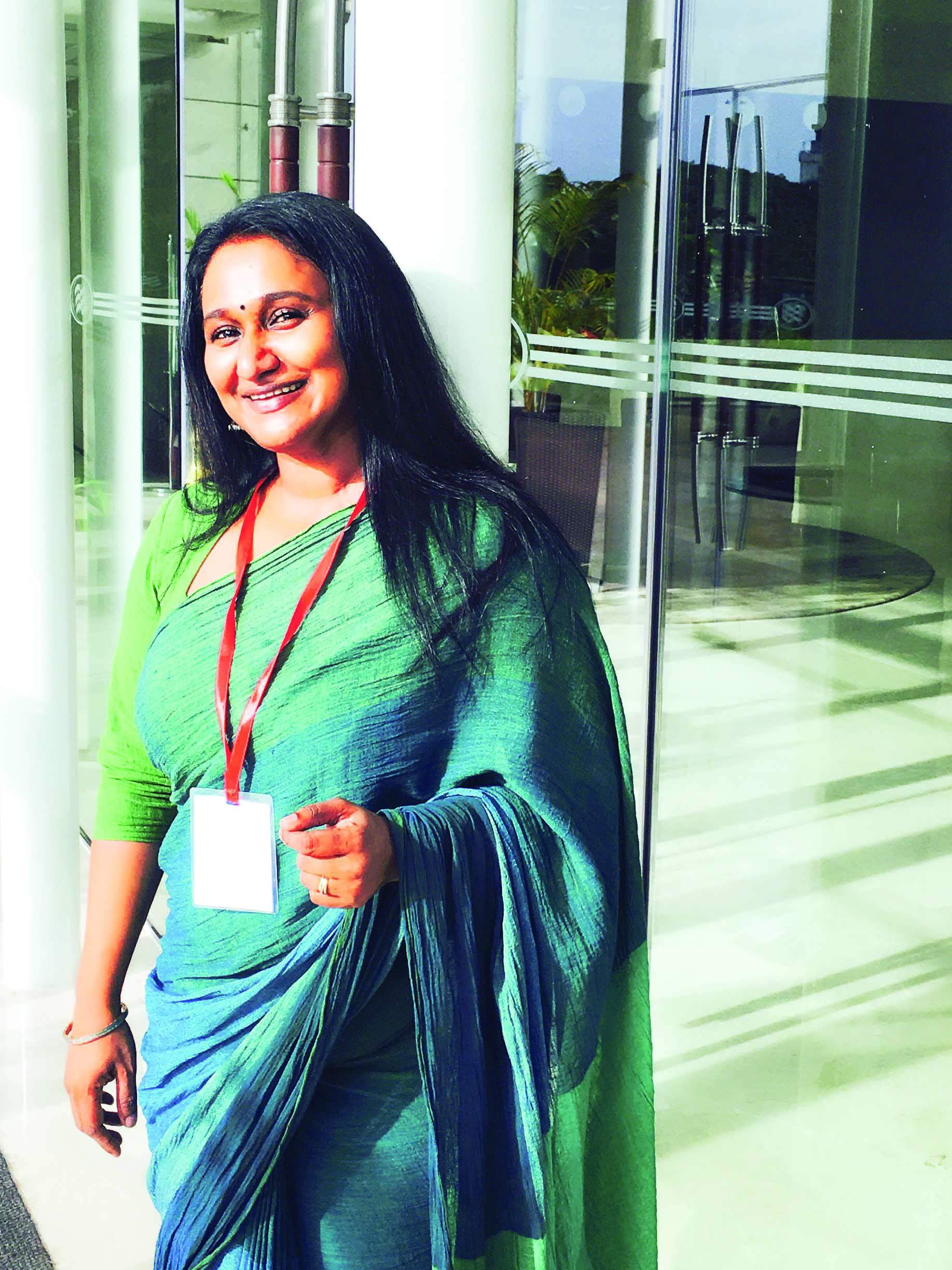 -based designer Cuckoo Parameshwaran’s label, Cuckoo, features everything that is khadi and handloom. A revivalist and textile conservationist, Cuckoo spent most of her career in design with master weavers from across Kerala.
Dealing with a variety of fabrics like linen, crepe, cotton, viscose and other combinations, this theatre artiste-turned-designer’s sensibilities are strictly minimalist with no bling attached. “It’s not like none of my saris have zari borders or hand embroideries, but in all cases, the fabric is the star of the show,” she says. With weavers across the 14 districts of the state, the 40-year-old is a stickler for technique, but tweaks the yarn count to make the fabric softer and easier to wear. Cuckoo gushes about her line of clothing made of thorthu, a fabric synonymous with bathing towels. “The fabric is usually woven at Balampuram and Kannur,” she says. The label also features bandhej prints on traditional fabrics. Rs1,500 upwards. At Cuckoo. Details: 0484 2310045 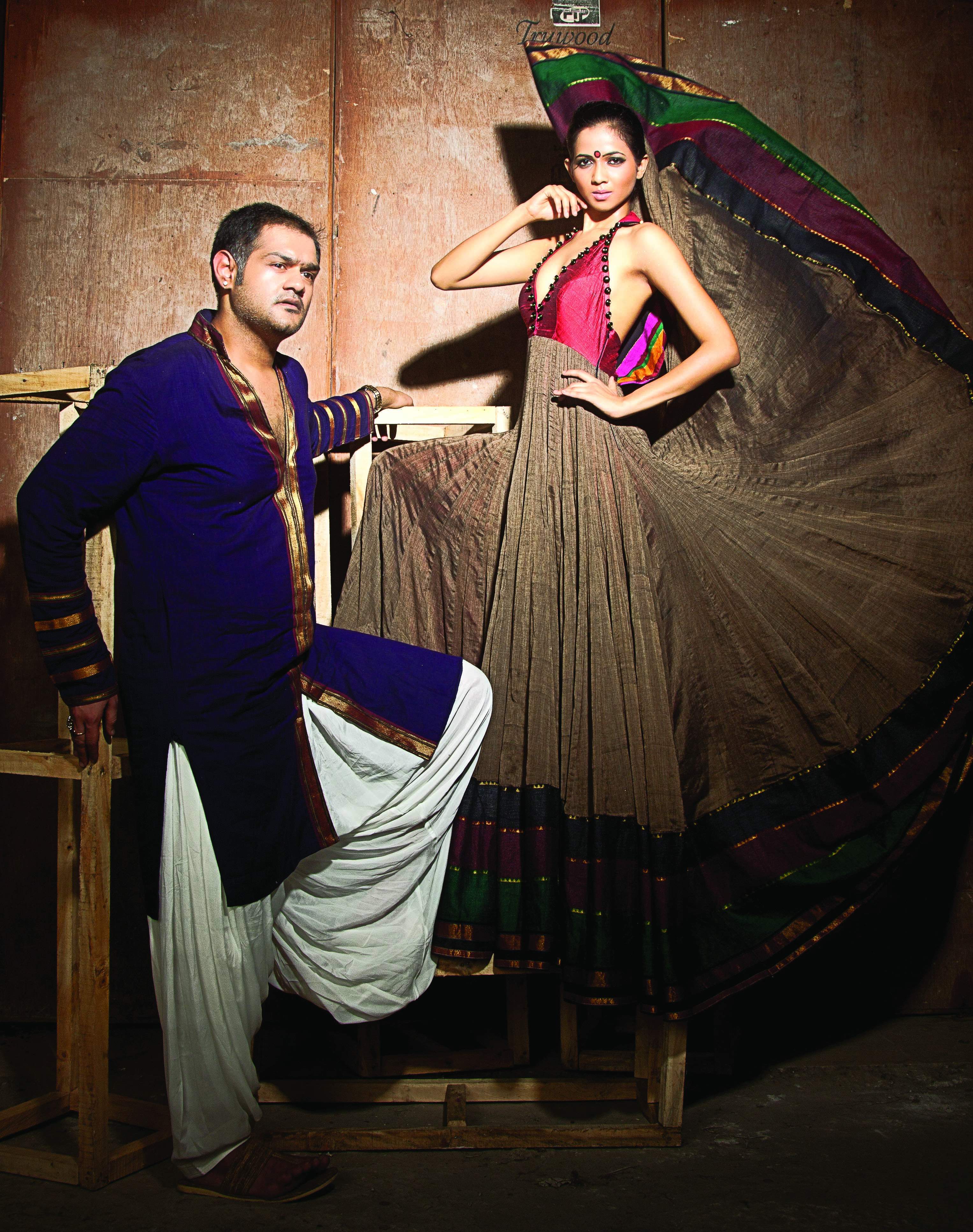 eaves an interesting twist. He has worked with rich weaves such as Pochampally, Narayanpet, Dharmavaram and the Gollabhama, making the most of local handwoven fabrics. Kummar calls himself “more of a traditionalist than a revivalist,” stating that all indigenous weaves are beautiful.
“I usually work with Mangalagiri, Kalamkari and Narayanpet weaves. My focus is also on weaves like the Gollabhama, apart from print and discharge dying techniques from Jamnagar,” says the man behind the design label Shravan’s Studio. Narayanpet saris possess a rich colour palette and are renowned for being intricately and deftly woven. This soft, lightweight weave is often preferred by brides who have spent hours donning heavy Kanjeevarams. Rs8,000 to Rs10,000. Details: 098494 84569

Priyanjoli Basu
Ever since Priyanjoli Basu moved to Chennai, she has been constantly exploring weaves that were once considered unknown. From working with weavers of Bengal in Birbhum, Purulia, Medinipur (Midnapore) and Murshidabad, this 32-year-old designer, who hails from Bengal, recently launched a line featuring a variety of cottons, ikat prints and a large selection of South Indian weaves. Working to create fashionable drapes, while keeping the tradition intact, this revivalist designer is changing colour schemes and palettes. “Tweaking the weft and the warp gives a dual-colour scheme. We’ve worked with combinations of black and maroon , and different shades of yellow and blue.” While her eponymous brand retails dresses made from handloom textiles, Priyanjoli custom-makes saris for a select clientele. Featuring botanical and geometric motifs that ring synonymous with traditional Bengali weaves, this designer adds a hint of Jamdani work. “We sketch out these motifs and try and make them contemporary,” she says. As  part of her efforts to bring back lesser-known weaves into the limelight, this entrepreneur-designer is also documenting all her work for people interested in taking up the mantle. Rs2,000 upwards. Details: priyanjoli.com