Couture chameleon: Nikhil Thampi carves a niche of his own

Nikhil Thampi subscribes to the belief that as an artist, one must be inspired, not influenced. It’s perhaps this principle that has seen him produce a body of work that with every season is distinctive and fresh, as if conceptualised by a different person each time. “It’s quite simple, really. Whether you’re a writer, a painter or a couturier, it’s very important to reinvent oneself. I’ve had critics come to me and tell me that my clothes don’t follow trends. My reply to them is that as a designer, it’s my job to set trends, not follow them,” says Nikhil, who recently collaborated with Allen Solly for a line that championed the Liva Creme fabric. “I’m very careful not to put out what’s already there. I’d rather take a long break to produce a line that is  original, than just churn out a concept that everyone is familiar with,” he adds. 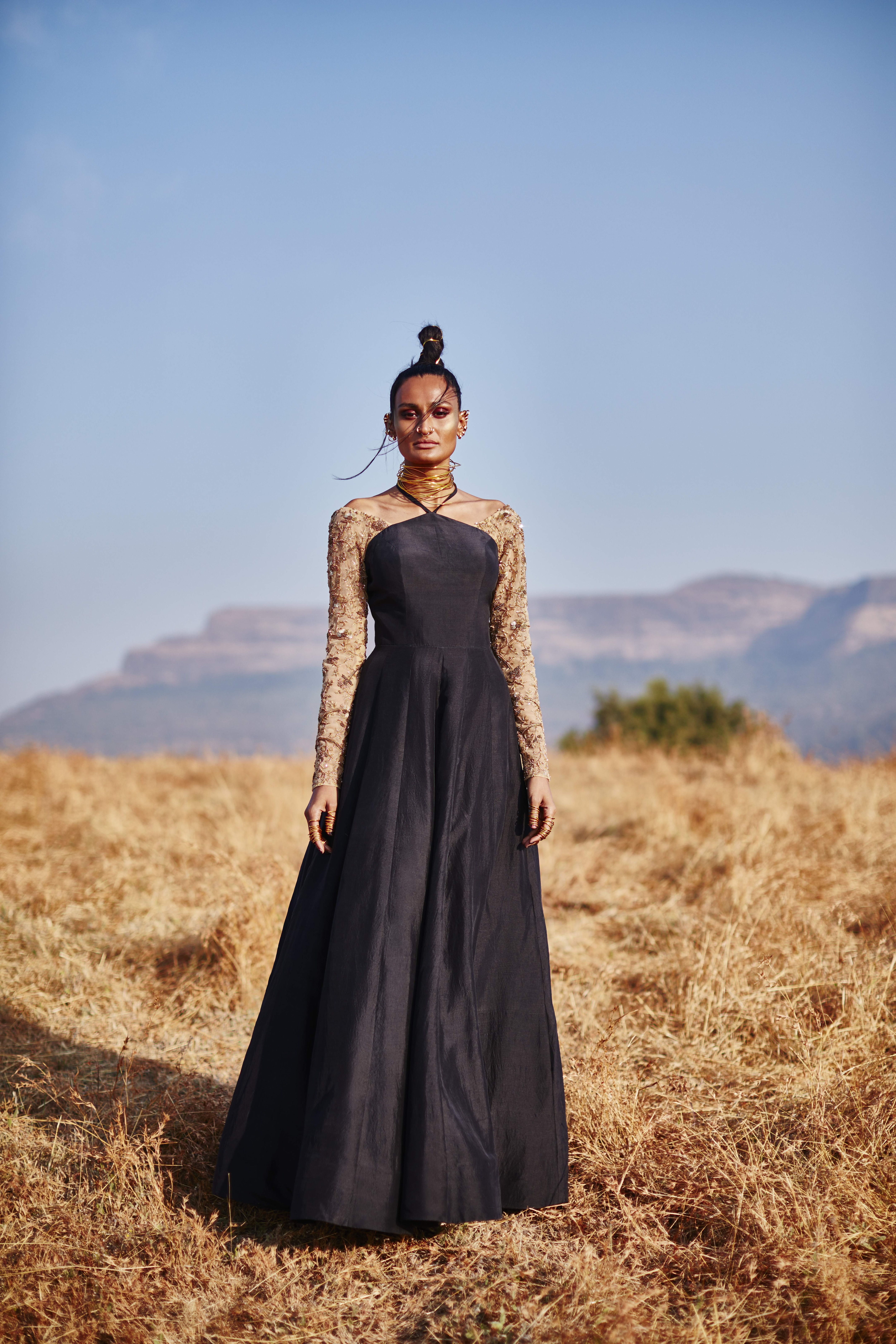 For someone whose romance with fashion was the result of being at the right place at the right time, Nikhil has made quite a splash in the six years since his first runway show. “I was among 800 applicants for Lakme’s Gen Next programme in 2011 and was one of the eight chosen to showcase their lines. If I remember correctly, that year, Lakme received a record number of applications,” he says, adding that it was while helping a friend prepare for a Fashion Week that he knew for sure that he was meant to be a designer. “I was always artistically inclined. But I did help my father with his aviation business for a while. That didn’t really click because I was not satisfied. Then one day, a friend who is a designer asked for my help. That’s when I fully understood that this is where I should be. I truly wanted to express myself and here was a medium by which to do it without being in front of a camera or on a stage. So I just took the plunge,” he recalls. “I am in love with every aspect of the job, right from ideation to marketing to seeing the final product. Every step fascinates me,” he adds.

While the rest of the world is gravitating towards anti-fit silhouettes, layered ensembles and camouflaging the contours of the female form, Nikhil feels that the body must be celebrated and flaunted. Whether you look at his Kathakali collection, an homage to his grandmother, or Quantum, which featured nothing but metal inserts acting as links between different parts of a garment, one can’t help but notice Nikhil’s penchant for form-fitting silhouettes and sharp lines. There’s also the detail of his liberal use of shimmer, metallic hues and golden tones, which make his pieces the ideal option for celebrities who flit from movie previews to film promotions to awards ceremonies.

“The Nikhil Thampi woman is a walking contradiction. She’s dressed in something uber glamorous, but has a personality of her own, her head on her shoulders and she’s independent and has a voice,” enthuses Thampi.

A quick scroll through his official Facebook page will reveal that Nikhil is endorsed by the likes of Deepika Padukone, Sonakshi Sinha, Kalki Koechlin and  Anushka Sharma. “It’s very encouraging to know that my brand is worn by everyone from Sridevi to Alia Bhatt. Bollywood has been extremely supportive of me. I can say confidently that every piece of every collection I’ve released up until now has been worn by at least one celebrity. This is not an exaggeration,” he says, adding, “It’s an absolute pleasure working with Anushka. She was the first celebrity to wear me and that will always be special. Then there’s Sonakshi, who’s my other favourite. She’s worn me multiple times. What I like about her is that she’s aspirational. If a fan sees her wearing my designs, she will immediately choose to buy the same article of clothing, because she embraces her curves and knows how to work it,” he says. Ask him who his ultimate muse is and he is quick to comeback with: Priyanka Chopra. “She stands for everything my label stands for. She is not afraid to voice her opinions, she’s self-made, she’s independent and is so stylish and graceful all at the same time,” he explains.

It’s often the fabric that can make or break an outfit and Nikhil is known to favour an imported crepe blend that falls beautifully, does not crease and doesn’t stick to the body. And yet, for his latest collection Sylph, he has moved away from this easy fabric to work with pure silk, dupion silk and net. Even as a lot of effort is being put into the revival and reinvention of Indian fabrics by many of his contemporaries, Nikhil chooses to remain realistic. “I’m self taught so I’m not familiar with the nuances, textures and science behind traditional Indian textiles. This is mainly why I steer clear of the Chanderis and the Benarasis and the 100 other gorgeous weaves of the country. Given the chance and the time, I would love to explore, research, experiment and bring out a collection celebrating Indian fabrics. But I’m not there yet,” he reveals. Though the textiles are quite a departure for Nikhil, his love for rich jewel tones continues to be evident in Sylph. Think black, sand, maroon, rust and rose. The Mumbai-based designer has also peppered his garments with intricate hand-embroidered detailing rendered in delicate floral patterns. “It’s a product of six months of experimentation. The entire range came together cohesively as an earthy selection of gowns, shift dresses, skirts, blouses, saris, trousers and jackets. I’ve wanted to get into the demi-couture space and I have done so with this line,” shares Nikhil. Sylph, which is expected to hit stores in August, uses nature as its inspiration and also makes a social statement with its back story. “It’s meant to make its wearer feel like a warrior princess. It’s cliched, but now is the right time for such a theme. I wanted to create a dialogue... what would it be like if roles were reversed… if women were the more powerful sex,” says the designer who has numerous awards to his name including the Elle Graduate award and Grazia Young Designer award, among others.

Barely six years in and he’s dressed almost every leading lady in Bollywood so what’s next on the agenda for Nikhil? “Well, by the end of his year we plan to expand both nationally and internationally. There’s also going to be a lot of focus on the business side of the brand, which means I am not doing any runway shows at the moment. For Sylph, I’ve released a lookbook, which I’m sure will work well for me,” he reveals.

Number crunching aside, Nikhil believes that Indian fashion is losing its originality and that that could affect the future of the industry in the country. “Of course there are designers like Bibhu Mohapatra, Rahul Mishra, Manish Malhotra and Sabyasachi Mukherjee who are doing amazingly well both locally and globally. However, the new crop, I think is completely aping the West and producing garments that are not really path breaking. I urge them to take risks, experiment and find a niche of their own,” says the Psychology graduate.

Edgy, contemporary and often futuristic, the Nikhil Thampi signature is easy to distinguish, be it by the exquisite cuts, the clever use of embellishments or the elegant way in which the drape hugs the body. Whether the new breed of designers are on the right track or not, Nikhil is well on his way to being a force to be reckoned with, if he’s not there already.