I was in Room no: 1156, in September earlier this year, at the hotel Pullman Aerocity New Delhi. Between braiding my hair and slipping into a pair of olive dungarees, an assortment of names of traditional Armenian dishes were swirling in my head.

Famous chefs and high-heeled guests had gathered at Pullman’s Honk restaurant for a curated Armenian dinner. In a few minutes, I had to meet the one and only Chef Zarmig Ohannes Haladjian, and I did not want to sound half-baked.

I had already heard a million stories about Chef Zarmig: the 23 culinary books that she has written. Mamig, her famous restaurant. She as editor/publisher of Saidaty magazine. Radio announcer. Kitchen artist. Menu creator. Food consultant. Catering expert. Host of several television shows. A painter, too. Phew! Zarmig does too many big things in one tiny lifetime.

Admittedly, Armenian food hasn’t quite gained the manner of popularity it deserves in India, and it doesn’t match up to even Lebanese cuisine in frequency of references on international reality cooking shows. In fact, it was Chef Sabyasachi Gorai at the capital’s only reputed Armenian restaurant, Lavaash By Saby (in Mehrauli), who brought to light lesser-known stories of Armenian food, culture and traditions being preserved in Asansol, the second largest city in West Bengal, and home to the country’s most sizeable Armenian population. A former Soviet republic, modern Armenia is a fragment of ancient Armenia, one of the world’s oldest civilisations, with a history of 2,500 years that witnessed the Armenian people being repeatedly invaded and oppressed by their warring neighbours.
When it comes to food, sumac spice is possibly the lone ingredient from Armenia that can claim some manner of familiarity among most chefs. For Zarmig, who is easily the most popular chef from the landlocked republic in southwestern Asia, it’s time to bring that home cooking to a larger stage.
In Delhi, Chef Zarmig, a certified judge of the World Association of Chefs' Society who is popularly referred to as the Queen of Armenian Cuisine, the prospect was of celebrity chef curated pass-arounds featuring the finest instances of Armenian and Lebanese cuisine, followed by an elaborate Pan-Asian dinner. For my part, loaded with interview ingredients, I tiptoed into Honk restaurant. Amidst a sea of starched white toques, there stood a petite woman, her large blue eyes twinning with the blue streaks in her ironed black hair, her glistening nose pin adding a hint of glimmer to the dimly lit restaurant.
I was sifting for an Armenian face, but it was ‘Marmig’ stencilled on her dress sleeve that gave her away. I knew that was Zarmig, the Armenia-born, Doha-based chef, who attended university at the
Al Kafaat, Lebanon, for a degree in Culinary Arts and later picked up a Master’s in Business Management from Liverpool University (London).

At the dinner, while Zarmig talked of bulgur (cracked wheat) and the use of cumin, cinnamon and thyme in traditional Armenian dishes, I traced the beginning of her career as Executive Chef in the Embassy of the United States in Lebanon, and a quick move to Lebanon Intercontinental Hotel
as Kitchen Artist Chef, specialising in carving sculptures out of fruits, vegetables, ice and chocolate. 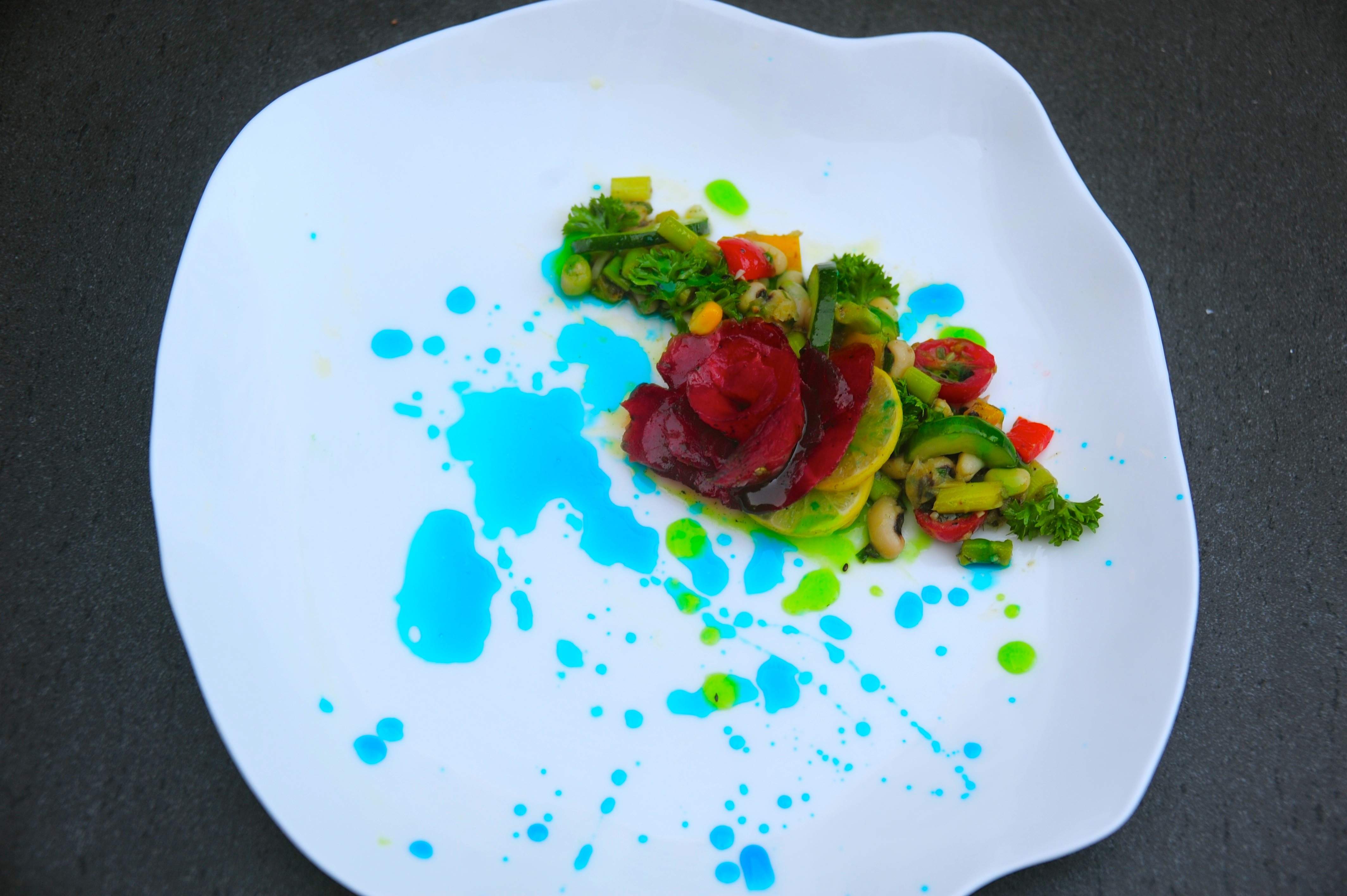 Perfect imperfections
As I dug a fork into an Armenian garden salad, Zarmig caught a breath, adjusted a wanton lock of hair from her forehead and sat opposite me along with her personal assistant Lei Ochoa. I assumed the conversation would begin with food, her favourite spices, and the chefs who inspired her.

Instead, she left spices and recipes on the back burner and hastened towards her existence and existentialism. “I never wanted to emulate anyone. Never had an ideal chef as my inspiration. I want to be a ‘character’. Unique. Different from everyone else, anyone else,” Zarmig began animatedly. She
continues, with her gestures and pointed histrionics adding a great deal of intensity to her manner of speaking, “The true work of art is a shadow of the divine perfection, and everyone should strive for success, and acknowledge the perfect imperfections.” Born into a modest, very conservative Armenian family, Zarmig always knew that she wanted to be a chef. As if she were to the kitchen born. However, in the patriarchal layout, the idea of a  working woman was almost blasphemous. Her father was unrelenting, but the resolute Zarmig persevered. At age four, she was helping her mother chop and clean vegetables. Too small to the reach the kitchen counter, she stood on a a stool to lend a helping hand.

Zarmig beseeched, sedulously built on her dream and finally her father said, ‘yes’. Not happily, though. She pursued her dream to be called a chef, and only when fame knocked her door and awards cluttered the mantle shelf did the father smile in approval — and pride.

A metaphor for life
“It was not easy. Being a girl in a feudal world is not the easiest thing.” Tears gathered in the corner of her almond eyes as Chef Zarmig emotionally talked of her beginnings. Before melancholy could rout her grit, she hopped over to that day in the US Embassy of Lebanon when someone asked whether she would work for television. She whooped in joy for “it was my dream.”

That one question led to countless television shows in Qatar, Lebanon and Saudi Arabia. In one of her Ramadaan episodes for Qatar TV, Zarmig cooks kebabs and
pilaff the Indian way. In between television shows and full-time jobs, she opened Mamig (literally, grandmother in Armenian), the only high-end Armenian-Lebanese restaurant in Doha, and also authored 23 culinary books. 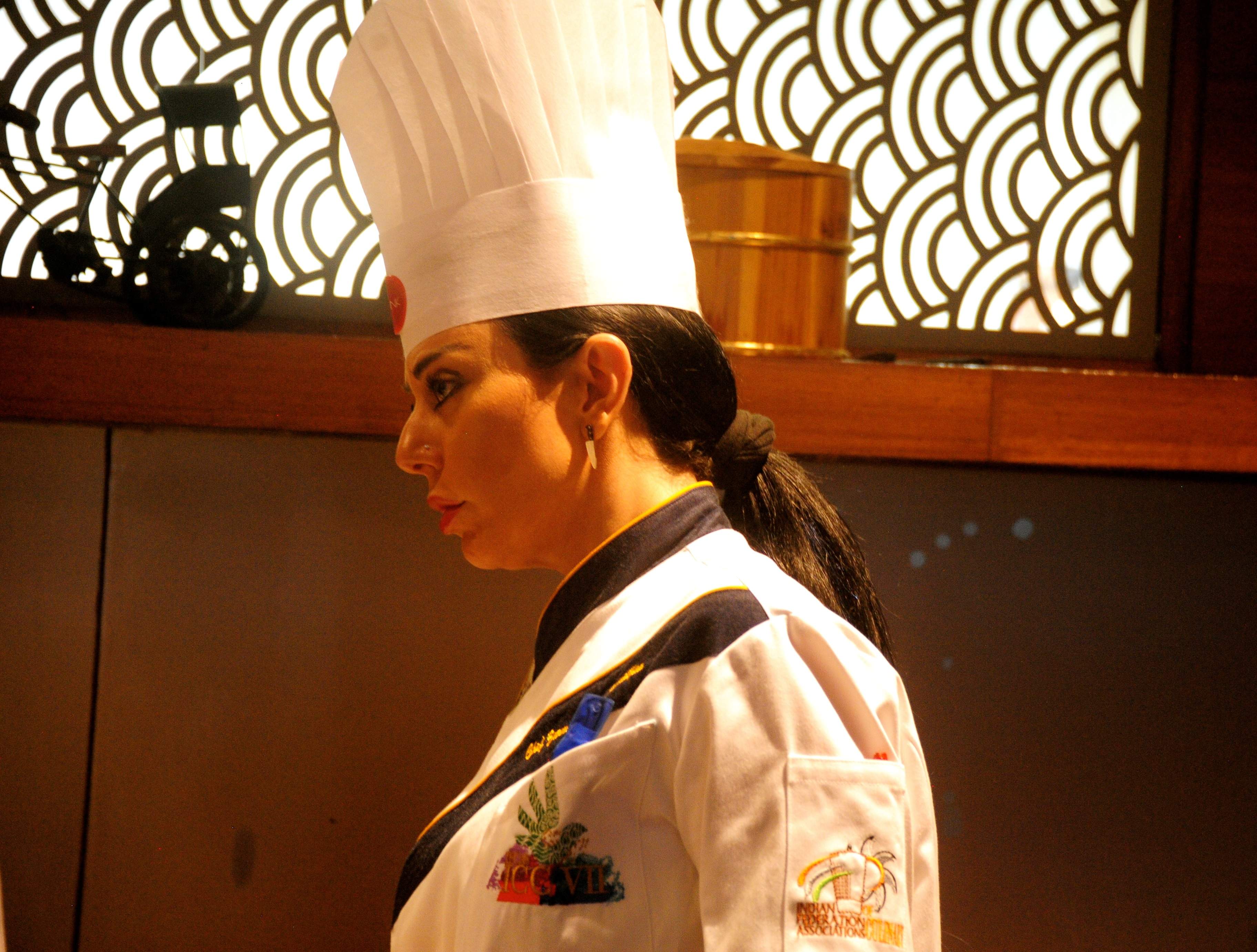 “See, when you are on this plate — as a metaphor for life — you do not think of the other plate. Stay on this plate, do your best, be good, honest, work hard and when you have done your best, only then do you get onto the other plate. And then, repeat the process for every plate,” says Zarmig. She adds, “Not every day is going to be good. On that day, remember that everyone throws stones at a tree laden with fruits. You have to stay brave and never give up.” I sat transfixed, refusing to interrupt her soliloquy and quickly picked up her life’s lessons.

Zarmig extends her homily on life and I completely blank out that I was talking to a chef, the Queen of Armenian cuisine, no less! That evening in Hotel Pullman, I did not learn much about Armenian cuisine. Grit, honesty, determination, goodness and the holiness of the heart’s affection — that is what Chef Zarmig served on my plate. 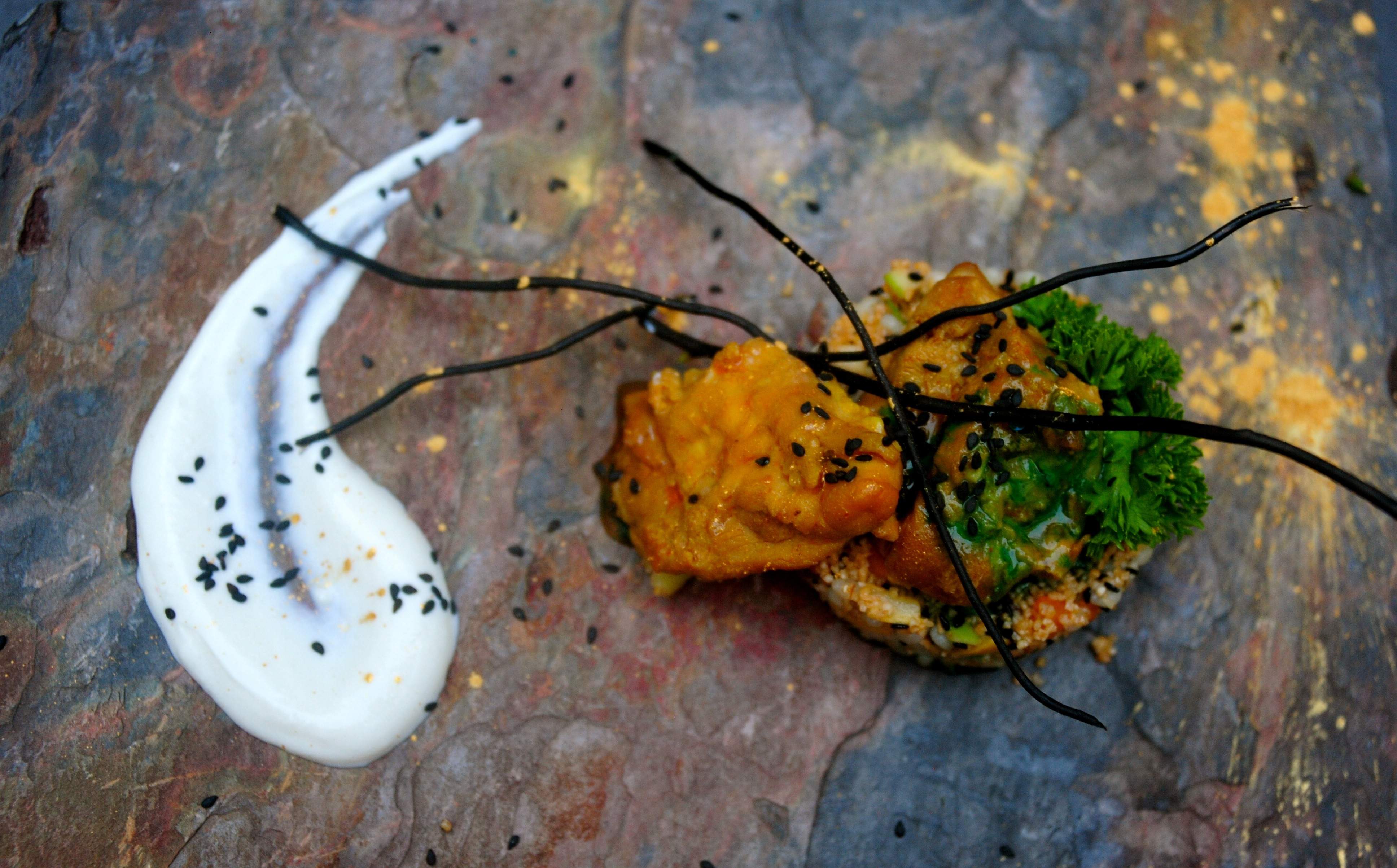 The art of food carving

Chef Zarmig spent six years learning food carving and garnishing. As a Certified Kitchen Artist, she carves fruits, vegetables, chocolate and ice. She loves carving watermelons because “you can see the six colours housed inside the melon” and describes ice as the hardest to carve/sculpt. She has also established an Academy of Gastronomy for cooking and carving, and written a book titled The Art of Carving.
Many believe that fruit carving originated in China during the Tang Dynasty (618-906 AD) in which mythological characters and animals were common motifs. In Thailand, watermelons were carved as
early as the fourteenth century.
In Japan, the art is referred to as Mukimono. Fruit carving is included in Matthias Giegher’s 1621 work, Il Trinciante (The Carver), where he describes carving oranges and citrons into abstract patterns, fish, animals  shell-fish, and the Hapsburgs’ double-headed eagle, but the art was not common in Europe or North America until the 1980s when several books on the topic were published.

Following her India visit, an exhibition of Chef Zarmig’s paintings will be held at the Katara Cultural Village, Doha, Qatar, until October 8. Follow Chef Zarmig on Facebook. Visit chefzarmig.com