India exclusive! In conversation with Halle Berry for Kingsman 2

One of the four Oscar winners in the cast of Kingsman: The Golden Circle, Halle Berry has been effortlessly switching back and forth between franchise movies such as X-Men and the 20th James Bond movie, Die Another Day, apart from smaller, independent movies such as Things We Lost In The Fire and Monster’s Ball, for which she won the Oscar. Her role as Agent Ginger Ale, the tech guru of the mysterious Statesman organisation that drives the action in the movie, allowed the actress to showcase another geekier side of herself. Indulge spoke with her about her technical prowess, the cultural divide between the US and the UK, and crafting Ginger’s look.

How did this role come to you?
Matthew (Vaughn) reached out to me. I got a call from him explaining who Ginger was. He told me this movie would be her introduction to the series and if it goes to a Kingsman 3 or Kingsman 4, she would play a very significant role.

Were you a fan of the first Kingsman?
Of course. I really loved the first movie. It reminded me of a modern day Bond. I thought the younger generation would definitely see it that way. I think this will be very much like the first one, a continuation of all the elements you loved about the first one. That Matthew Vaughn style is still there and it’s opening up now to involve the Statesman, which allows the audience to experience different kinds of characters.

You mentioned Bond and, of course, you were in a Bond movie back in 2002. So you can make that comparison first-hand.
I think that’s why I draw that immediate association. I have been in both and that’s what it felt like to me. Colin (Firth)’s character, Harry, felt very much like the James Bond character. The tone of the movie has a tongue-in-cheekness to it, yet there are very serious stakes. The world is fascinating with all kinds of gadgets, just one more mind-blowing thing after another. But it’s a modern version because of Matthew’s style and the way he shoots. It’s fresh and feels quite different.

What can you tell us about the Statesman? They seem to be a very different proposition from the very British Kingsman…
Well, they don’t go to the same tailors. The American version of what the Kingsman do is quite different, but still just as deadly and just as capable.

And who is Ginger Ale?
She’s the tech-head of the bunch, but there’s something about Ginger. For most of the movie she’s the female version of Mark Strong’s Merlin. There’s more to Ginger than meets the eye. She has bigger aspirations. While she loves being Merlin’s counterpart, I think Ginger wants to do different things within the organisation.

Are you very tech-minded?
Not really, but I am someone who’s very involved in what’s happening now. I have two young children, so staying abreast of all that and staying up with it is key. I’ve never played a techy, cerebral character like this. I learned a lot from Mark. I spent time with him talking about what he does for the Statesman. Ginger has a lot of technical expertise to deal with. She’s also a doctor. They have some funny bits.

The movie seems to be having a lot of fun with the tension, cultural or otherwise, between the very British Kingsman and the laidback Americana of the Statesman. What’s your take on how the movie treats this special relationship?
I think the movie comments on it in a subtle way. There are differences between the British and Americans. Our sense of humour is very different. It shows you our thought processes. Having Julianne (Moore) play Poppy is indicative of where we are in America and the place where women are arriving to. She’s indicative of that, for sure.

What can you tell us about working with the rest of the Statesman?
I worked with Jeff (Bridges) and he’s one of our generation’s greatest actors. To work with him was a great pleasure. He’s very funny and big and very in charge of the Statesman. I loved working with Channing (Tatum) too. Pedro (Pascal) is such a wild, fun, spontaneous human and being around him, you never know what’s going to happen.

Does that reflect Ginger’s relationship with her fellow Agents?
These boys are a little bit wild. Ginger gets a little annoyed with them from time to time because they’re not very good at following the rules. She has to occasionally whip them into shape. I don’t know if she’s stern. She’s a bit more staid and in charge. Agent Whiskey (Pedro Pascal) is a loose cannon. Does he piss her off sometimes? Sure. Nonetheless, she respects him.And then, of course, there’s the Brit  contingent. They’re a great team. You can see that on-screen and off-screen. They seem to like each other and have fun together. Colin is the leader of the bunch and is so kind and generous and thoughtful. The leader sets a beautiful tone for everybody.

The Kingsman are renowned for their sharp Savile Row suits. The costumes for the Statesman, as designed by Arianne Phillips, are a little more down and dirty. How did you find that?
It’s fun. It’s a process. That’s not the hair I’m walking around in every day! Ginger has one costume. It was very much a work uniform. I was pretty much only in the lab, in the office, behind the computer, alongside Merlin.

You’ve come close to working with Matthew Vaughn in the past. Nowthat you’ve finally worked together, how did you find the experience?
I loved working with Matthew. I think he’s a real actors’ director. He directs, but he lets you act and bring your interpretation to the character. He’s also wicked smart and knows exactly what he’s doing. It’s in his head, every day. He knows where to put the camera. He was editing as he goes, and showed us a scene that was done one day. When it was over, my mouth was on the floor. It was such good morale for everyone. We all got to see it. It’s comforting to be in hands like Matthew’s. He’s capable and able and creative. He won’t stop until it’s perfect.

The stars in their own words 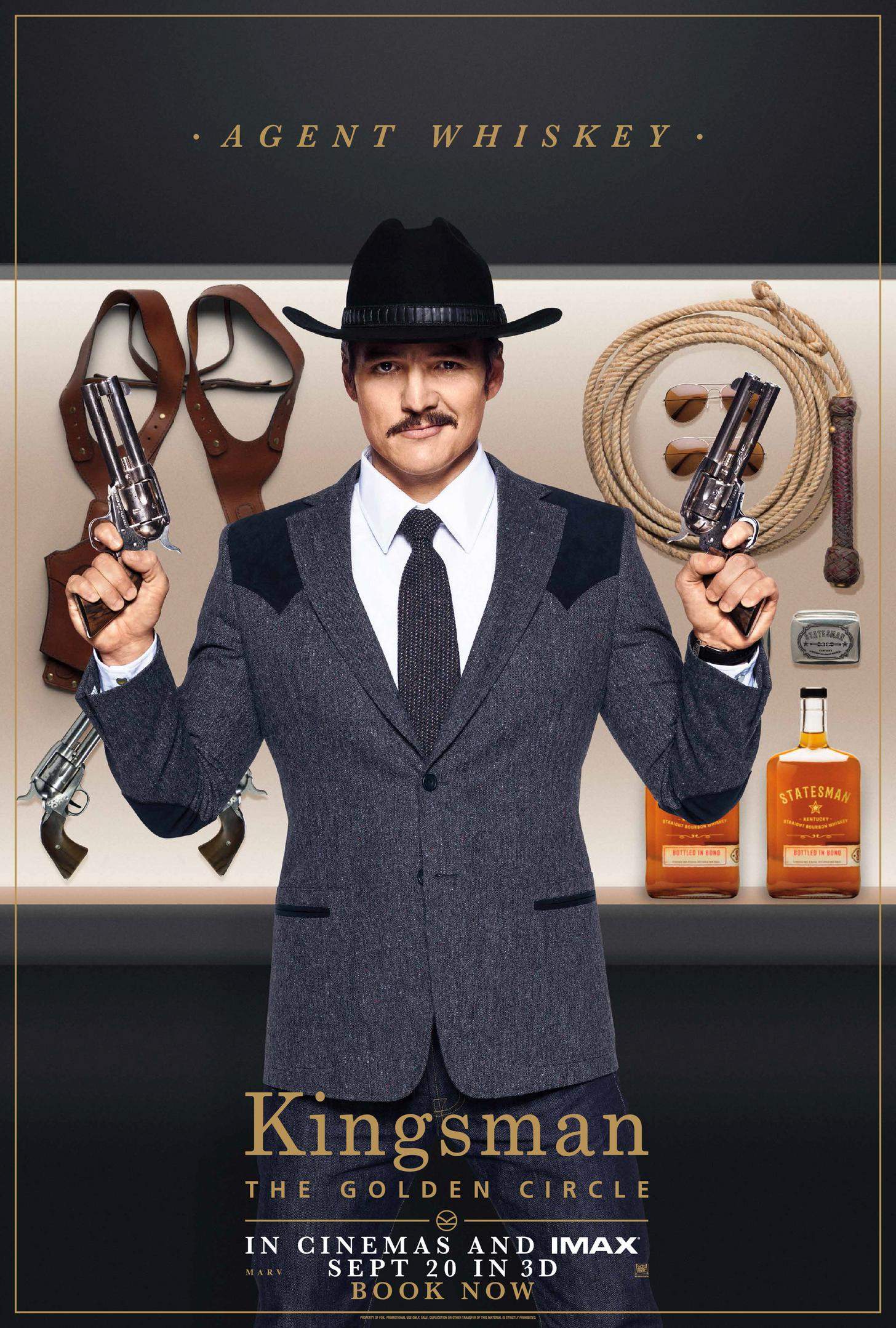 Pedro Pascal as Agent Jack Daniels/Whiskey
“Our agent names are based on liquors. I’m Whiskey, Channing Tatum is Tequila, Jeff Bridges is Champ for champagne, and Halle Berry is Ginger Ale. We’re cowboys.” 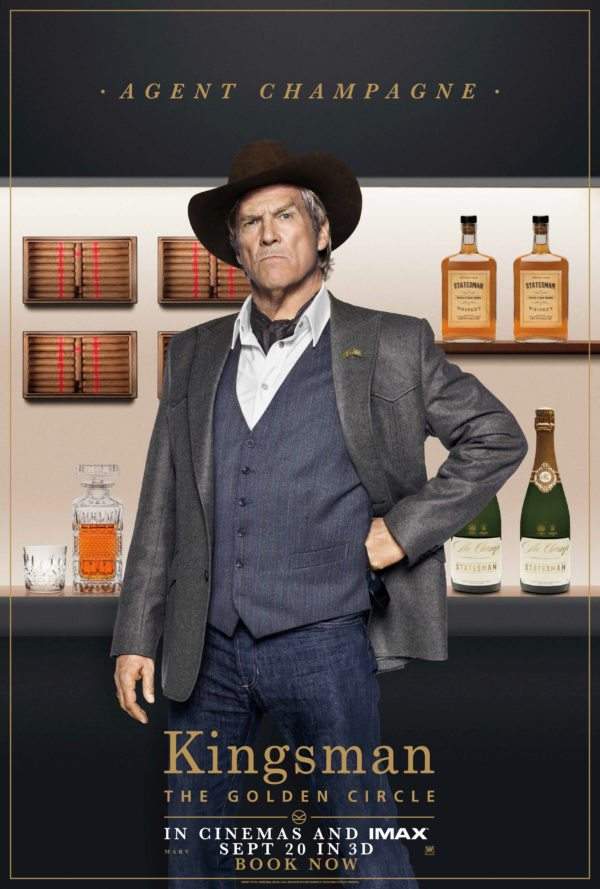 Jeff Bridges aka Agent Champagne "Champ"
“He’s a bit like Michael Caine in the original. He thinks Champagne might be a little too frilly. (Laughs.) I figured, ‘Champagne? That’s the name you’re going to give me? We’ve got Whiskey and Tequila!’ I don’t care for champagne too much. Ever had a champagne hangover? There’s a lot of sugar in that.” 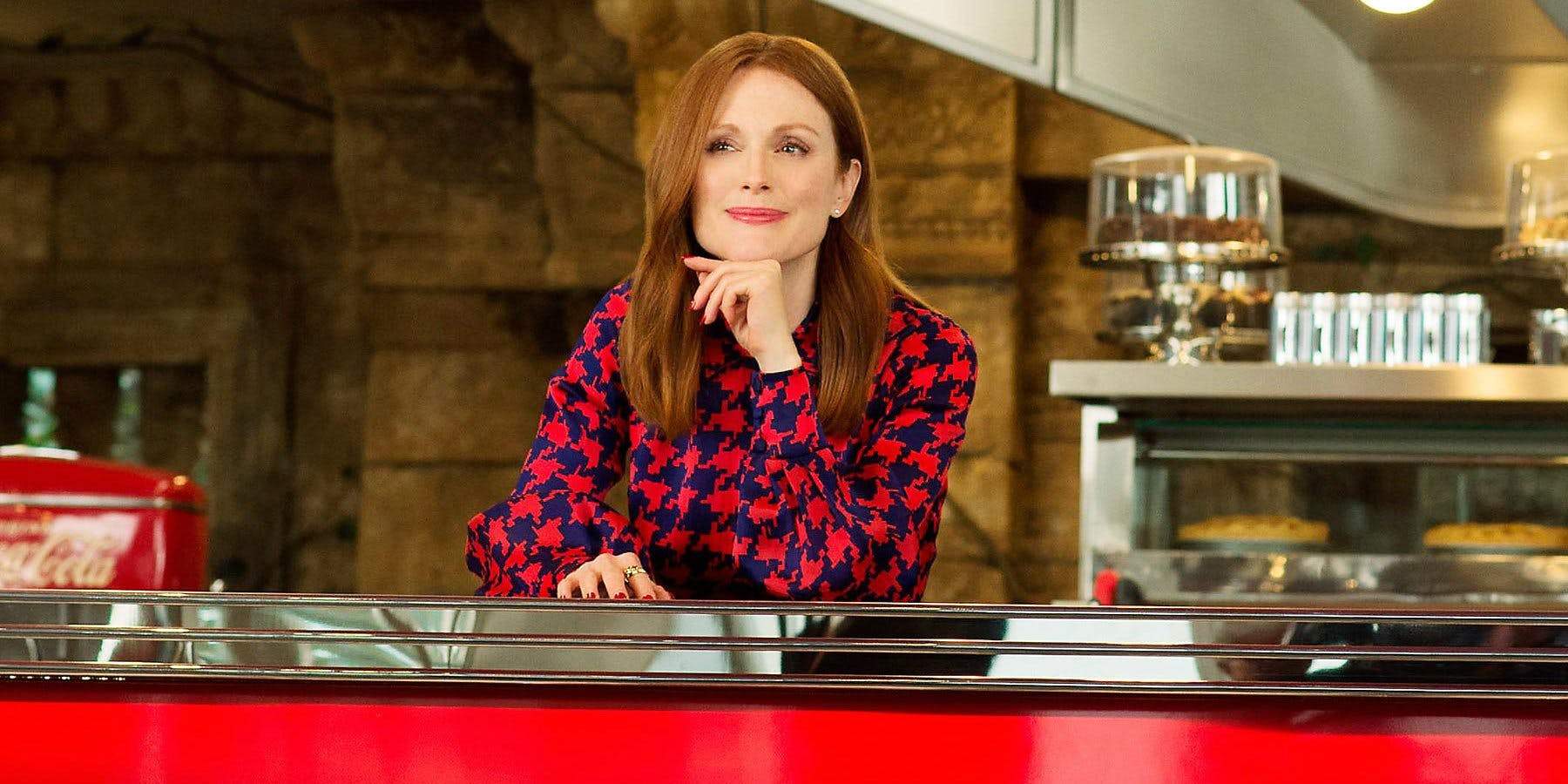 Julianne Moore as criminal mastermind, Poppy Adams
“She’s clearly a sociopath, a megalomaniac in the way that all great villains are. She’s first and foremost a business person and wants to be acknowledged for the great acumen she has. She’s also very interested in American pop culture. It’s playing with classic American ideas within a very British spy world.”

Colin Firth as eyepatch-wearing Harry Hart
“This is a man who does what I could never do. There’s something about this character that I found quite accessible. Harry is a bit of a figure coming out of the mist. The film is interested in playing on that special relationship between Britain and the US. The characters are archetypes of each country. You don’t see pinstriped men walking down the street in England, just as if you walk down a street in America, you’re not going to see guys in fringe jackets and Stetsons. So it’s playing on subversions of extreme differences. The Brits are very plummy and the Americans are very laidback. It’s a kind of odd couple banter. I think of things like The Persuaders, where Roger Moore needs to loosen up a bit and Tony Curtis needs to clean up a bit. What can we learn from each other? The affection is always there, a mutual respect hidden in the rivalry.” Taron Egerton as Gary “Eggsy” Unwin/Galahad
“We meet Eggsy an undisclosed amount of time after the first one. But you can see in his new house that there are three additional Sun headlines on the wall indicating that he’s done a handful of missions on his own. And he is now going steady, to use a very 1950s term, with — shock horror — the Swedish princess from the first movie. Love blossomed in an unusual place. He’s trying to juggle the lifestyle of being a Kingsman and a full-time spy with also trying to nurture a blossoming relationship with a person whom he really loves.”