Chris Cornell, lead singer of Soundgarden and Audioslave, dies at 52

Chris Cornell, a pioneer of Seattle grunge music, died in Detroit on Wednesday hours after the band had performed at the Fox Theatre. The 52-year-old Soundgarden musician, who created the Grammy Award-winning single Black Hole Sun, was found dead on the bathroom floor of his hotel room at the MGM Grand Detroit.

Cornell and his band were in the middle of a sold-out US tour, that was due go on until May 27 and had been scheduled to perform in Ohio on Friday. The singer closed his Detroit concert with Soundgarden song Slaves & Bulldozers, merged with a refrain of Led Zeppelin’s In My Time of Dying. The lyrics contain the words: “In my time of dying, I want nobody to mourn. All I want for you to do is take my body home.”

The lead singer also appeared to be active on social media hours earlier on in the day, where he posted a Soundgarden song called Crooked Steps with a message reading: "I'm the shape of the hole, inside your heart."

Born Christopher John Boyle in 1964 in Seattle, Washington, the singer formed his band Soundgarden in 1984 with Hiro Yamamoto and Kim Thayil. With his powerful four octave voice, the band emerged as one of the biggest bands from the city that would soon become the home of grunge, and to join the likes of Nirvana and Alice in Chains.

Three of Soundgarden’s albums were certified platinum, including Superunknown, which became one of the band’s most popular records of 1994 selling over three million copies and earning two Grammys. The band returned with Down on the Upside in 1996 which entered the charts at number two. Though the album had strong record sales initially, it failed to go platinum. The band was soon plagued by rumours of internal fighting between Cornell and Thayil and eventually split in 1997. 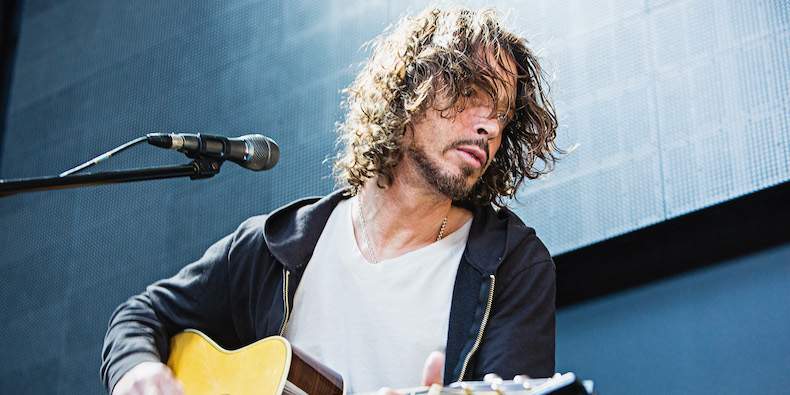 In 1998, the singer started his solo career and also formed the supergroup Audioslave which included members from two of the biggest rock bands of the nineties - Soundgarden and Rage Against The Machine.

Their debut album which had songs like Cochise, Like A Stone and Show Me How To Live earned itself a triple platinum in the USA. The band later disbanded in 2007 due to personal and musical differences.Soundgarden eventually reformed in 2010 and reportedly had plans to for their seventh album.

The grunge icon battled a lifetime of addiction, admitting in an interview to Rolling Stones that he became a daily drug user at the age of 13. By 2005, when Cornell married his second wife Vicky Karayiannis, he was finally able to kick his habits for good. Talking about his addictions the singer was quoted saying "It was a long slow slide and then a long slow recovery," adding, "for me, it was mostly alcohol from my late teens until my late thirties.

In addition to his music, Cornell started the Chris and Vicky Cornell Foundation to support children facing challenges, including homelessness, poverty, abuse and neglect.

Chris Cornell is the third of Seattle’s Big Four to have passed before his time. The others including Kurt Cobain from Nirvana and Layne Staley from Alice in Chains.

The singer is survived by his wife and children.