Exclusive! 'The beauty of success is when you don’t see it coming': Ilaiyaraaja

You remember, while devouring all his speeches, that he’s always spoken of concerts with great love. You ask him about the rush of playing music live. He throws a far-off look, and remembers how the first high he got out of composing music was in playing them to his friends. Armed with a harmonium, he would play the popular cinema songs of the time, and in between, sneak in original compositions. His friends would ask him which film they belonged to? In pride, in ambition, he would say, “The film hasn’t been released yet.” It was the first time he believed that his work was worthy of being in films. It was the first sign that his music had, as he often puts it, “uyirottam (soul)” and “iyalbaana azhagu unarchi (naturalistic beauty)”. He uses these words to explain the inexplicable that makes good songs great. He says a great song needs to have a musical sense, the right grammar, but most importantly, “Adhayum thaandi (way beyond)…” You have listened to Kanmani Anbodu Kadhalan many hundreds of times, and so cannot stop yourself from completing his sentence: “…punidhamaanadhu (pure).” He may be 75 years old now, but he’s as sharp as ever. He remembers Kamal Haasan’s song, and with a laugh, goes, “Idhu manidhar kaadhalalla!” Your mind happily continues, “Undaana kaayamengum…” but he’s waiting for your next question. 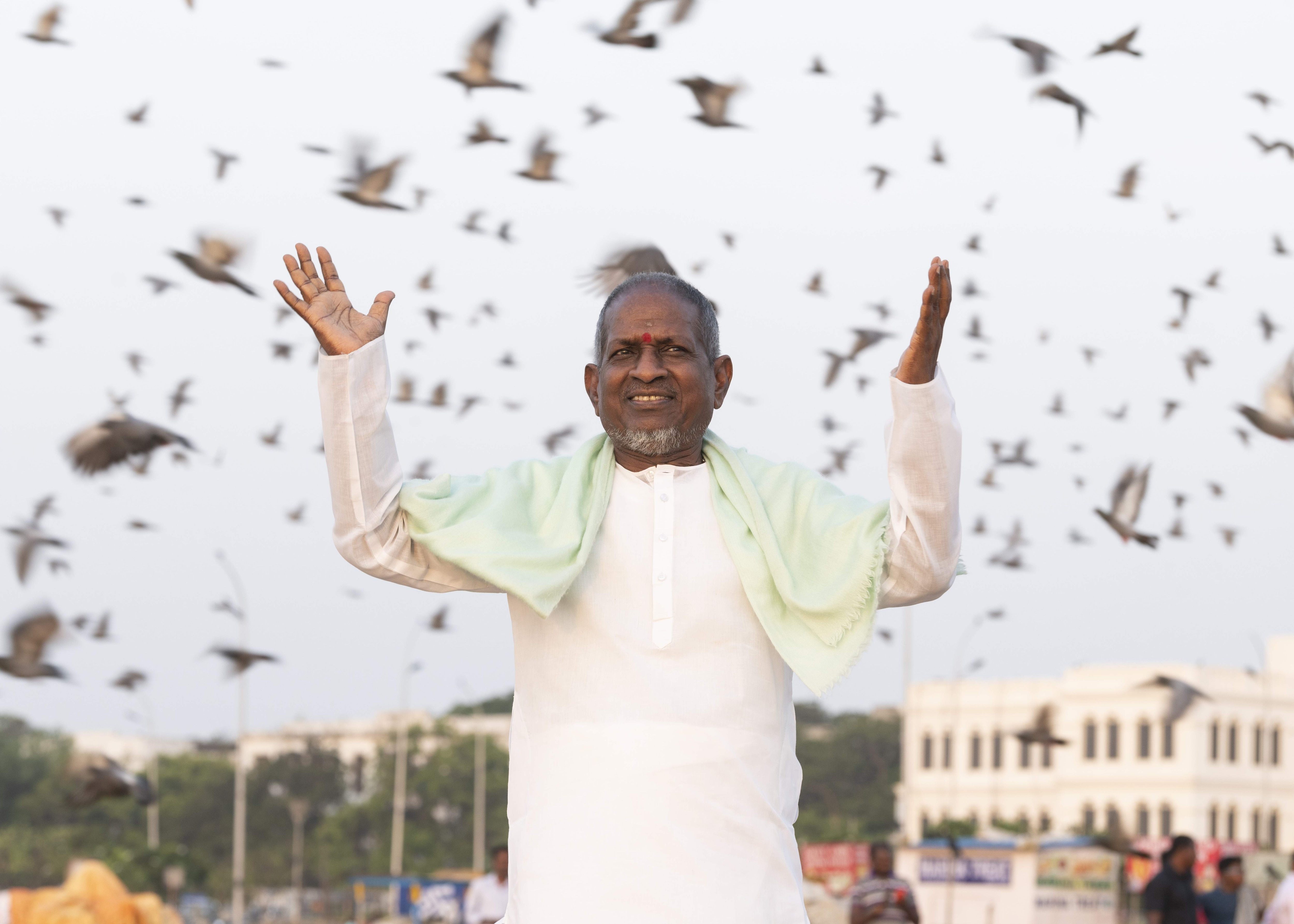 As you struggle to break out of that composition, you decide to ask him about his own struggles. He did have his own share, after all, trying to break out as a composer in Chennai. How would that struggling Raja have reacted, had he known the scales he would reach? He doesn’t know, and more importantly, believes he shouldn’t. “The beauty of success is when you don’t see it coming,” he waxes. “It’s like how the beauty of God is that you don’t see him,” he says. He breaks into an unexpected skit of how he would react if God were to appear every day. Raptures on the first day. Astonishment on the second. Joy on the third. Happiness on the fourth. Indifference on the fifth. He wouldn’t have been a half-bad actor, you think. He stops you laughing when he throws up another gem: “You always stop paying attention to the known.”

You realise it doesn’t quite apply to his songs. It has you wondering why songs, these days, despite fetching many lakhs of views, don’t quite linger. He says the answer is in the question, and points out that such music is created with the express intention of being marketed. He can’t dignify such commodification as music.

You think of songs like Janani, Poomalaye, Thenmadurai, Thendral Vandhu... and you wonder how long he must have spent creating such tunes. He shares that he’s a bit like Kavignar Kannadasan in that his art isn’t a result of conscious thought. It just happens. He became aware of this when other people would praise his music, and he would tell them he spent little time composing them. This isn’t hubris; this is just honesty. Others would ask him how he came up with the idea of composing a song in Bilahari raaga, and he would say, “Just as you would come into my room, and I would say hello, so it is with the raaga. It just arrives, and I greet it.” 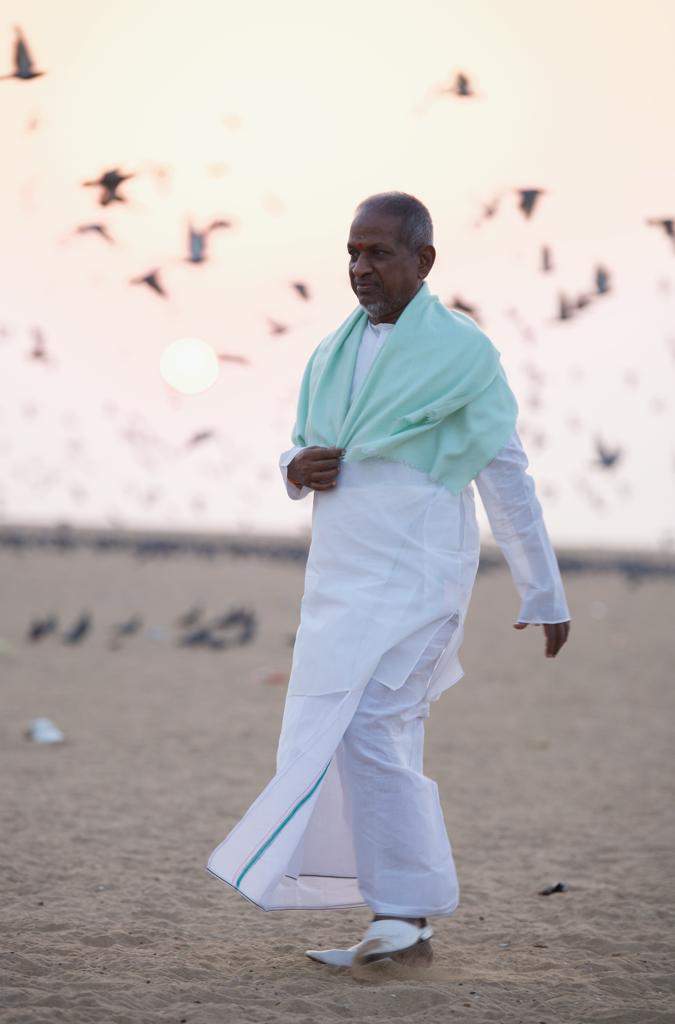 You take off from his comparison with Kavignar and remember that the lyricist’s last song was Kanne Kalaimaane from Moondraam Pirai. You ask if he remembers how that song was created, but are not ready for him pointing at the corner of the room in LV Prasad Studios (the venue of this interview), and saying, “That’s where he wrote the song. It took half hour for him to write  three songs, of which Kanne... was one. You could never separate his lyrics from my tune. He had an incredible talent for coming up with poetry for songs.”

Of those Ilaiyaraja holds dear, Kavignar is one. His brother, Bhaskar, who tirelessly knocked on doors of production houses — real and bogus — to fetch him chances, is another. He remembers Dhanraj master fondly too, his first guru and the man who introduced him to Kannada composer GK Venkatesh, under whose tutelage he learned almost everything. He remembers joining him as an assistant by the end of ’60s, when the latter was composing for a Kannada film called Goa Dalli CID 999. It was a time when Raja knew nothing about writing music, nothing about its importance. He probably didn’t have to, given his almost superhuman power of remembering tunes. On the first evening, GK Venkatesh realised to his astonishment that Raja could sing to him, all five tunes he sang offhandedly in the morning. “He tested me further by asking me to sing the second line of the first tune, followed by the third in the third. That wasn’t a problem for me either.” Nevertheless, Venkatesh drummed into Raja the importance of writing music, especially when it came to instructing musicians. “I was red-faced about my writing goof-ups on the first day, but two years later, I was making musicians red-faced about theirs.”

His debut film, Annakili, happened, courtesy writer-producer Panju Arunachalam, who had heard Raja perform Annakili Unna and Machaana Paathingala with just a harmonium. He had instantly decided that a story had to be written around these songs. “It was a time when I was playing my compositions with accompaniments to  producers and directors like SP Muthuraman, VC Guhanathan, Devaraj-Mohan, and RC Sakthi. However, it took just a harmonium and my voice to convince Panju Arunachalam. “Thiramaya kandupidikardhum oru thiramai (to discover talent is a talent in itself).” 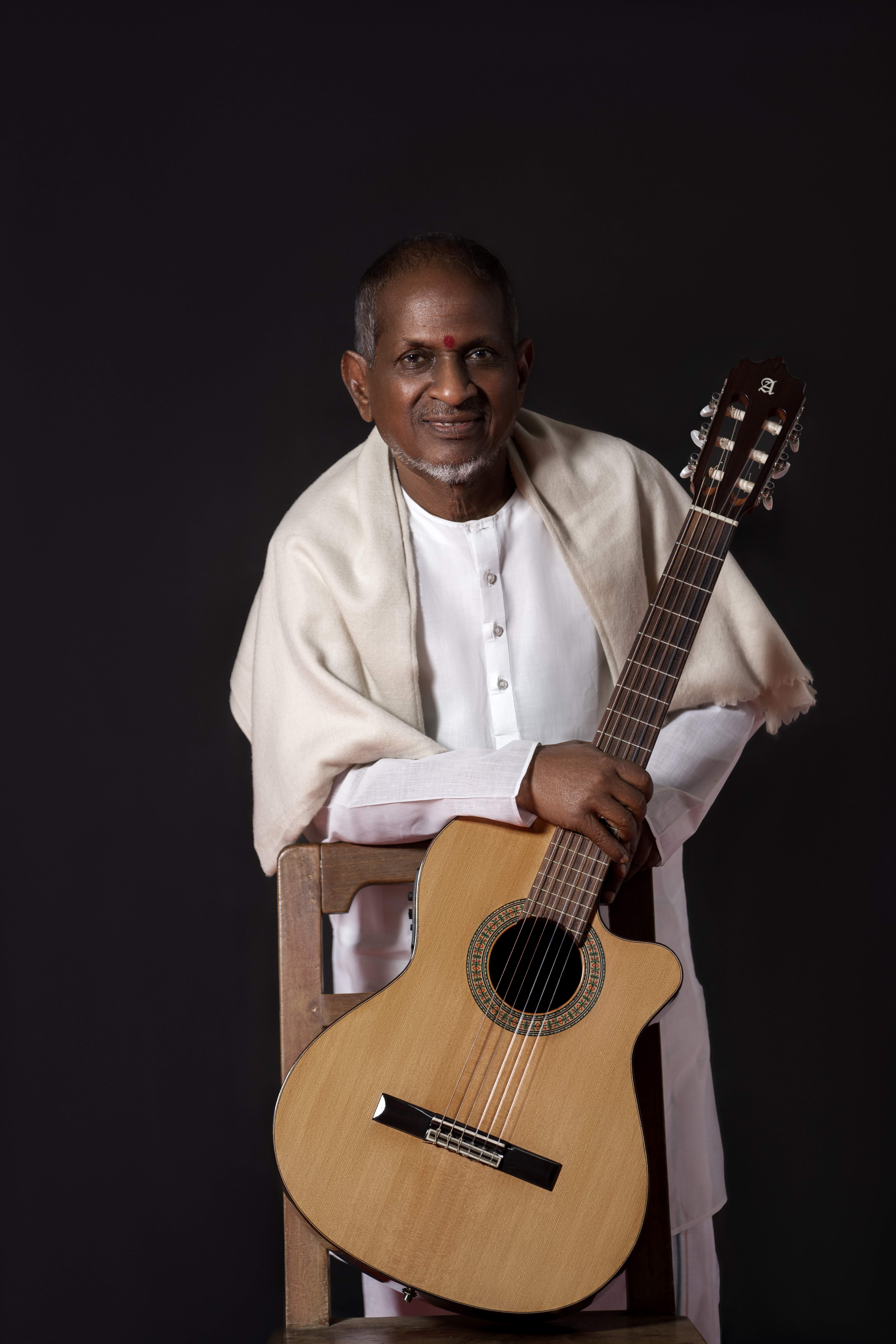 You remember, suddenly, that he had taken a jibe at the audience at a Yuvan Shankar Raja concert, when he pointed out that all the audience seemed to know was film music. He still stands by that jibe.“You haven’t heard real music,” he says. “You will never get an opportunity to.” He is talking about the vast genres of music out there that the average person will likely never be in the presence of. “When you hear the truth in music, you will become its prisoner. Sometimes, subconsciously, it pours into my music. That’s why it still lingers.” Again, this isn’t hubris. This is his attempt to rationalise the incomprehensible.

Time is running out for the interview, and you realise you haven’t even touched upon his stellar background music work. There’s no time to individually analyse his work in enduring films like Nayagan, Mouna Raagam, Aboorva Sagotharargal, Thalapathy, Punnagai Mannan... you get the idea. So you merely settle for asking when he got good at it. He talks of how he was first shocked to realise that the music in his imagination wasn’t what they wanted for films, how his first 15 films, save for Annakili, are an example of the struggle he underwent. “If someone hurt another, they wanted the sound to go damaal.” It was when films like 16 Vayadhinile happened that he discovered like-minded artists, those unafraid to experiment — non-conformists. “When doing background music, I’d ask myself if other composers would use music at a particular place. If they would, I would not. My originality grew from my desire to stand out.” 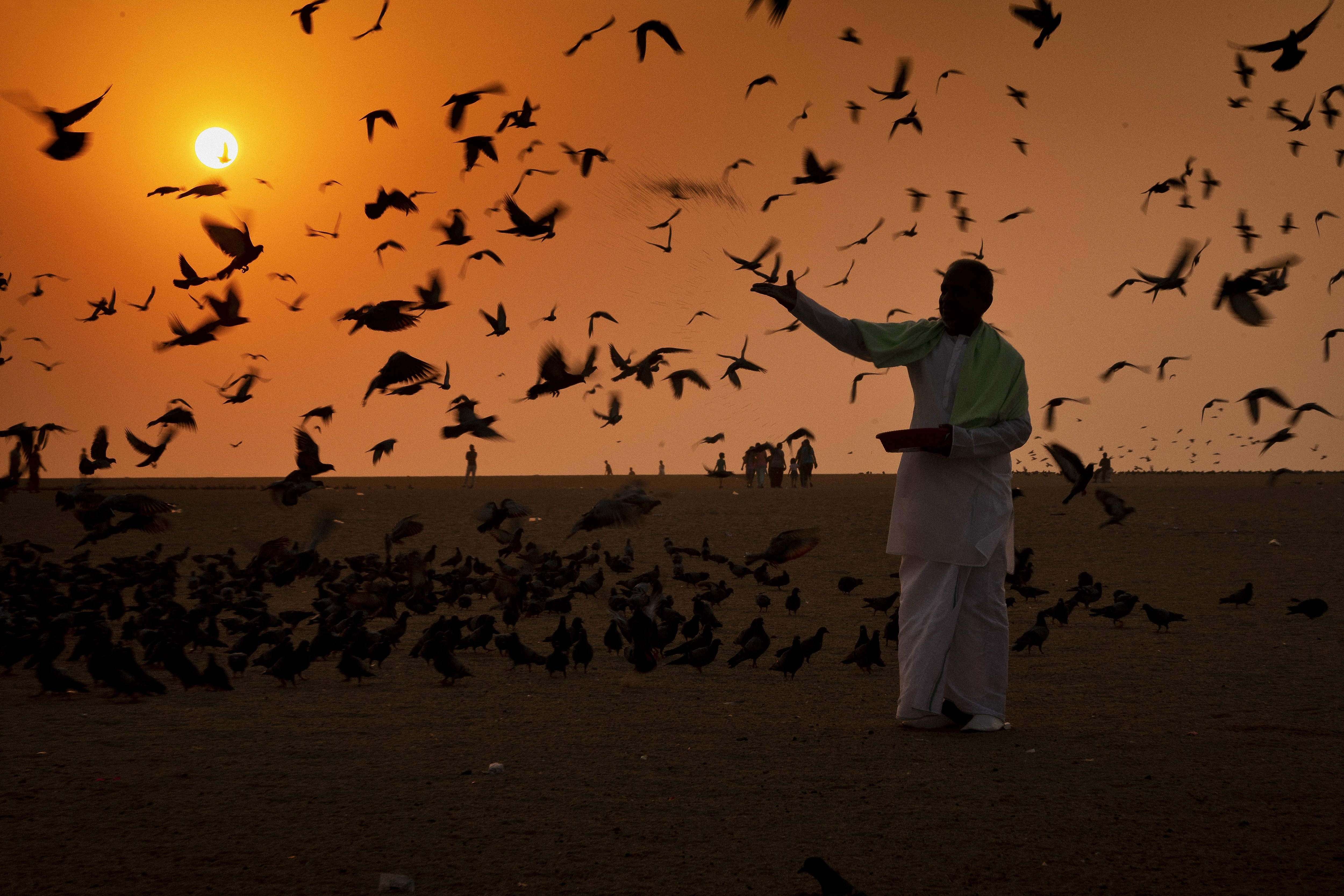 You move on to his understanding of Western styles at a time when there was no internet. “Poppat Jamaal,” he says and laughs. He’s talking about the popular Chennai outlet of the times that celebrities would frequent, seeking exposure to foreign cinema. Mere exposure to world cinema doesn’t make you worthy of creating it, he quickly points out. “It’s a librarian’s job to know which shelf a book is in,” he says. “Vaaila nozhayaadha kalaignargal paera sollittaa, ellaam karachu kudichadhaa aagiduma?” (If you drop names of unpronounceable artistes, will it make you an expert in music?)

The clock ticks, and you realise you haven’t even touched upon his influence in the careers of stars like Kamal Haasan and Rajinikanth. He remembers Kamal as a precocious kid in Kalathur Kannamma. He remembers him, later, as a young man singing in his light music troupe. And now, he remembers him as ‘unnathamaana kalaignar’ (towering artiste). 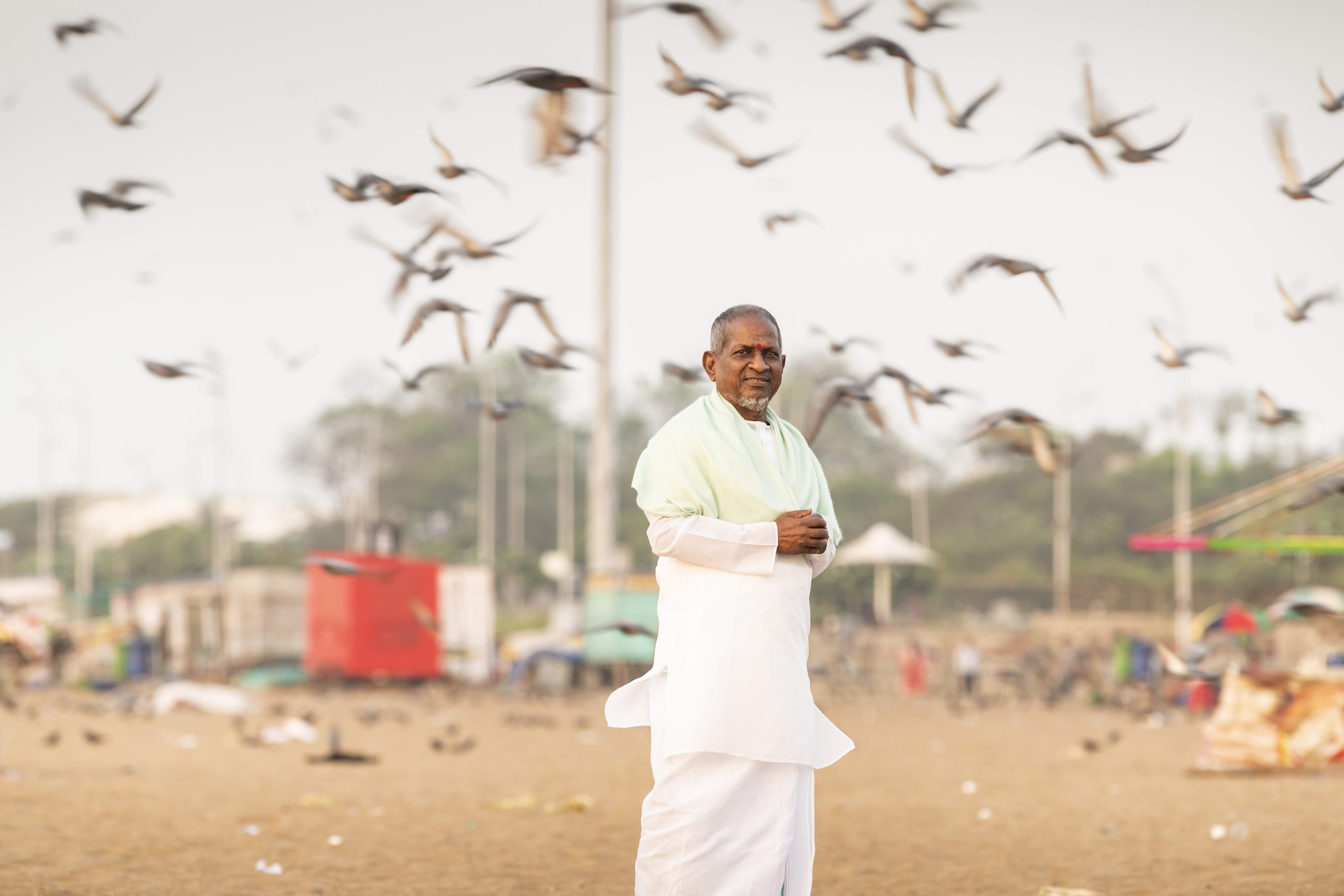 You draw his attention to Rajinikanth expressing at the recent Ilaiyaraaja 75 show that his music was always better in Kamal Haasan films. He laughs it off, and clarifies that he’s done historical music for Rajinikanth. You know what he means: Johnny, Thalapathy, Dharmathin Thalaivan, Mannan… He cuts in and shares that Kamal, for his part, complains that he made better music for Rajinikanth. “Summa vittu paapaanga.” (They try to pull my leg).

The interview is almost over, and it seems like we have just begun the descent into his oceanic career. Ahead of his Isai Celebrates Isai concert, which is bringing about the reunion of SP Balasubrahmanyam and Yesudas with Ilaiyaraaja (after their recent disagreements), I ask him what he feels about all of them getting together. “Janangaloda magizhchi, ennoda magizhchi (If people are happy, so am I).” If there ever were any doubt over whether his art is for his own sake or for its audience,
this makes it abundantly clear.

Isai Celebrates Isai, Ilaiyaraaja live in concert, on June 2, 5.30 pm onwards at EVP Film City and in Codissia at Coimbatore on June 9.