Anand Rao's play, A Muslim in the Midst to be staged in Bengaluru this August-September

After successful shows in New York, Yale University in Connecticut and at the South Asian Theatre Festival in New Jersey, the play A Muslim in the Midst premieres in India in Bengaluru this weekend. Written by actor-director Anand Rao, the narrative reflects how the society and people’s mindsets have changed post the 9/11 terror attacks.

The play looks at islamophobia, the issues of economic refugees, class consciousness, social and educational inequalities, and most importantly how terrorism has impacted people across the world. The story is set in Bengaluru, three days after the 9/11 attacks. A poor, immigrant Muslim couple, Haneef Pasha and his pregnant wife Shabana are stranded, late at night. They are desperate to reach a relative’s house but are unable to get a rickshaw. A Hindu couple - Raj and Priya - has been watching them from a distance. What’s interesting is that Raj and Priya are both working as executives in American companies. But despite the class difference, they take pity on the Muslim couple and offer a ride in their car.

Anand talks about bringing the play to India and how he came up with the idea:

What took you so long to bring the play to India?

When I first wrote the play and had the first round of successful shows in New York, bringing it to Bangalore was on top of my mind. Presenting it in Bangalore was always a major milestone in the play's artistic journey. However, the last three years have been busy. After its opening in 2016, the play was invited to perform at the South Asian Theatre Festival in New Jersey and then on campus at the Yale University. Then we had a three-week run at Actor’s Fund Art Centre in downtown Brooklyn, New York. We also had staged readings at various places. I did not find time to begin the conversation about a Bangalore production, until this year. I deliberately kept this fall and summer free in anticipation of this production. Actually, I wanted to present A Muslim in the Midst in both Kannada and English. The Kannada translation, "Nammolagobba Mussalmana" is in its second draft and am confident will be seen here in the near future.

What triggered the thought to write the play?

The play was inspired by personal experience. It was in the year 2004/05, I offered a ride to a family of complete strangers. My wife was working late, and I was waiting for her on MG Road. From the driver's seat of my car, I saw a Muslim family on the footpath. It was late at night and I could see that the man of the family was getting restless trying to find a rickshaw. There weren't many autos and the ones hanging around were just ignoring him. Out of curiosity, I asked where they wanted to go and found out that they wanted to go to a town way beyond Peenya. I was headed toward Rajajinagar, which is in the same direction. Though I did not immediately decide anything, I kinda toyed a bit with the idea of giving them a lift.  When my wife joined me, I shared the thought with her, and she agreed with me that we should help them. We took them with us and dropped them off near a rickshaw in Rajajinagar.  The ride was uneventful and we barely exchanged a few words with our surprised and extremely grateful passengers but in hindsight, there was a lot said and unheard in hindsight.  The experience stayed with me for a long time, and my mind echoed with the thoughts about how many different ways that could have gone wrong. I am not exactly sure at what point the inspiration stopped and imagination took over. I first wrote it as a short story. Upon reading it a few times, it occurred to me that the episode offers an interesting dramaturgical challenge for the stage. 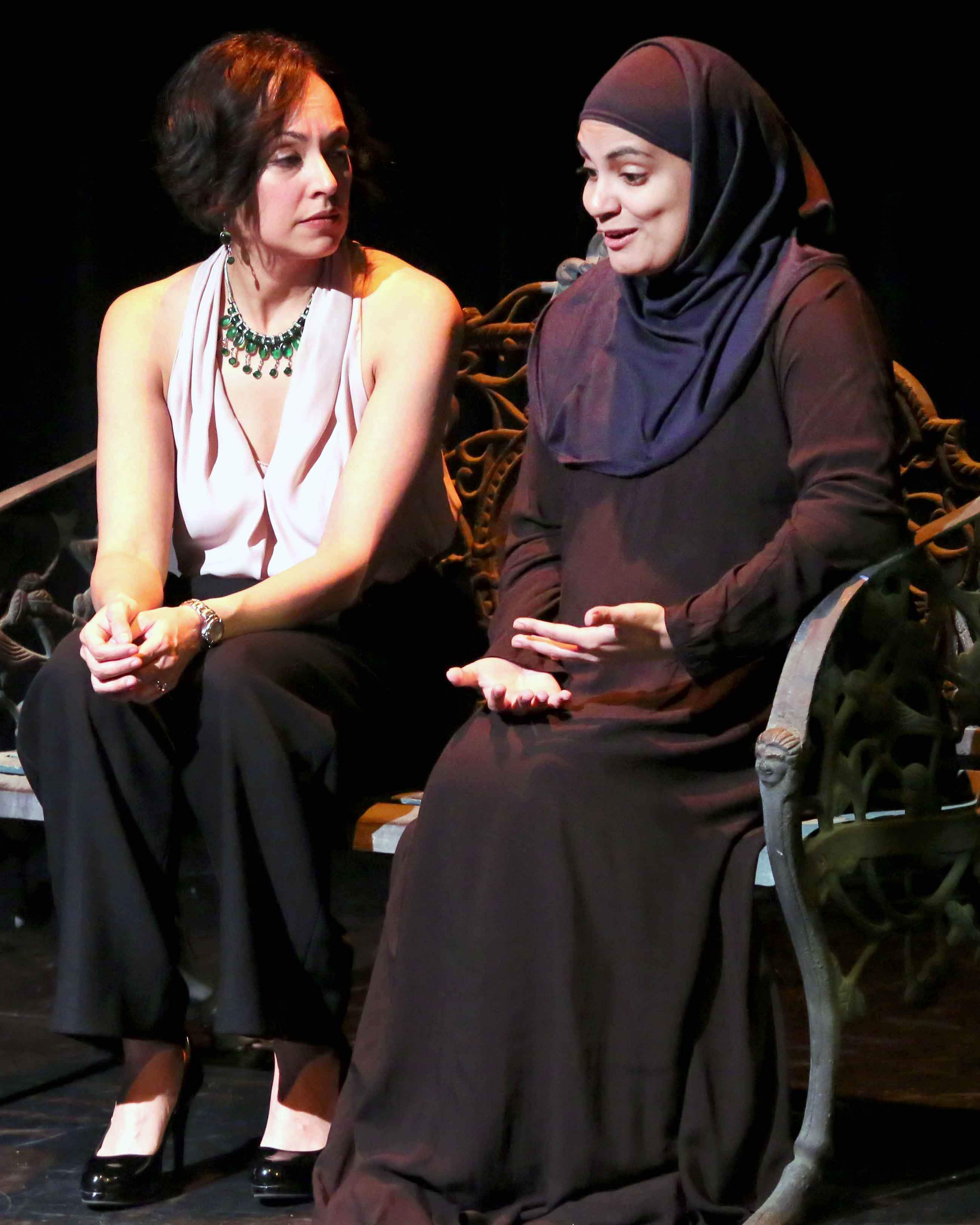 Can you give us a synopsis of the play?

Three days after the 9/11 terrorist attacks on the US, in the Silicon Valley of India, Bangalore; poor Muslims, Haneef Pasha and his pregnant wife Shabana are stranded. It’s late in the night and the new immigrants to the city are desperate to reach a relative’s place in a distant suburb. They wait on the footpath pleading with every passing rickshaw. Watching their restlessness from a distance is Raj and Priya - a Hindu couple, both executives of American companies. Taking pity, the westernized executive couple offers to take the traditional Muslim couple along. The conversation in the car quickly takes an unexpected turn as the two worlds collide. Fueled by a pro and anti-Islamic rhetoric, and warnings about potential terror threats intermittently playing on the radio, the characters fight within their self-imposed confines of prejudice and fear, in their attempts to look beyond the obvious ideological differences, and unravel a common fellowship based on humanity. 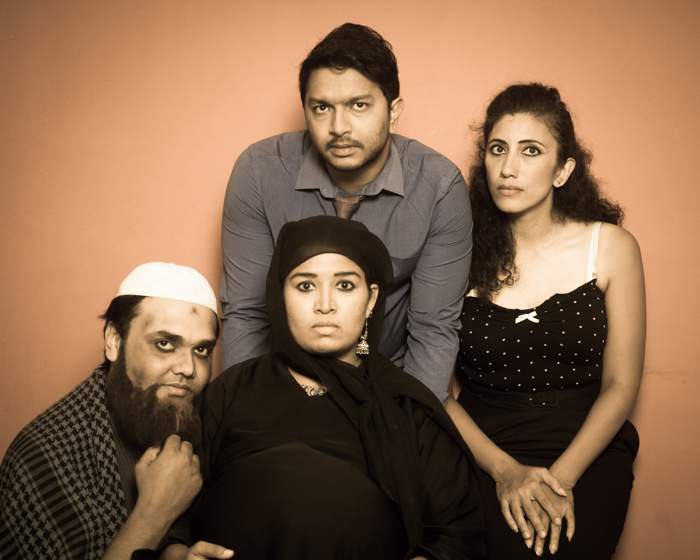 What is the significance of the play in today's time?

A Muslim in the Midst is probably the first play about 9/11 to make it to the world stage. A story set in Bangalore, the play captures the American event’s impact on distant societies from an outsider’s perspective.  The play puts into focus the issues around class-consciousness, social and educational inequality, gender equality, and perceptions around politics and religion.  Today, the world has become far more divided than ever. Divisive rhetoric is celebrated more and more. Though there is the word Muslim in the title, the play is much less about religion and more about the general human tendency to treat those different from us as inferior. A Muslim in the Midst can be set anywhere in the world today. You can swap the characters to become anybody without having to change the nature of their conflict. When people from completely different backgrounds, having conflicting worldview are put in an enclosed space, friction is inevitable. Despite overwhelming ideological differences, people can work toward recognizing common fellowship based on humanity. The characters and their travails is a good representation of how a biased narrative driven by politicians, media and personal fears can impact the most vulnerable – ordinary people, on the street. The play captures a crucial transition time in India’s history - a country plagued by terrorism for decades. A Muslim in the Midst continues to generate interest from various groups and audiences. It provides a great subject for debate and discussion for everybody. From commercial theatre audiences in Manhattan, a mostly South-Asian audience at Rutgers University, and an academic and scholarly audience at Yale University to a discerning diverse audience in downtown Brooklyn, the play has been widely appreciated for its thought-provoking and the engaging story narrated with authenticity and reality.

How has it evolved since the first staging? Any inclusions/omissions?

The play was heavily workshopped even before its first public reading in March 2016. After I wrote the first draft in November 2015, more than 3 months were invested in it with experienced developmental directors Kristine Niven and Gene Santarelli of Artistic New Directions, New York. During those days, some amazing professional actors gave their time in reading the script over and over again for us to get the rhythm and nuance right. That process helped me to get the script in great shape by the time we premiered at the Hudson Guild Theatre in New York.  Not much has changed in how I had imagined the whole play. When the productions began, every director brought his or her own styles and interpretations of the script. The script has seen 5 different directors including me and the current one, Rachana Prasad. Every actor and every director throws new light on the script, and I sit in amazement at how much more the play reveals every time a fresh pair of eyes reads it.

What do you want the audience to take away from it?

What you believe in your heart would be the conclusion you would draw from it. The resolution to the play is in your perception, understanding and what you believe is the truth. Audiences have participated in long talkbacks and debates long after the play is over. Unanimously people do agree that the play has triggered an introspection of their own biases and prejudices. It holds a mirror to their beliefs, assumptions, and notions.

Any elements you want the audience to keep an eye out for?

Keep your ears peeled, sit back and enjoy the ride. Let the quartet draw you in.