Self-confessed reality TV junkie Chrissy Teigen is the most legitimate source of information and real talk about the American reality TV world. The TV personality and author is famous for her love of reality TV and she often takes to Twitter to share her opinions about what's ob her watchlist. Chrissy who's from LA recently finished binging the real estate show Selling Sunset which has been taking social media by storm.

The show essentially takes a deep dive into the glamorous and cutthroat world of real estate market of the Sunset Strip in West Hollywood. Twin brokers, Jason and Brett Oppenheim, run a brokerage in West Hollywood, called The Oppenheim Group, which has reportedly closed over a billion dollars in real estate deals, sells some of the plushest LA properties to millionaires with the help of bunch of high-flying real estate agents who also explore their personal relationships on the show. 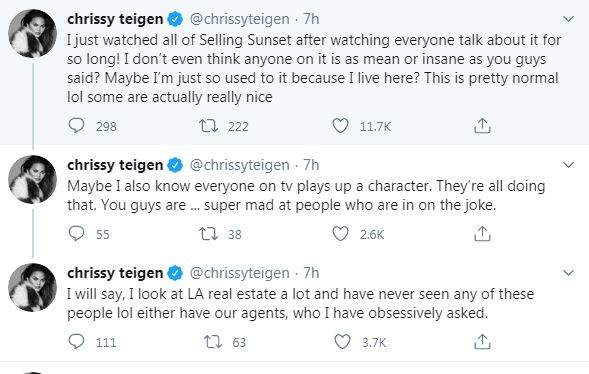 Chrishell Stause, Christine Quinn, Mary Fitzgerald, Davina Potratz, Maya Vander, Heather Young, and Amanza Smith are the real estate agents who are the face of the reality TV show. The third season of the show premiered on Netflix this August and while Twitter has been speculating like crazy about the show's return, Chrissy has some very grounded concern about the legitimacy of the show and the company.

"I just watched all of Selling Sunset after watching everyone talk about it for so long! I don’t even think anyone on it is as mean or insane as you guys said? Maybe I’m just so used to it because I live here? This is pretty normal lol some are actually really nice," Chrissy wrote on Twitter recently. The star also revealed that she is quite familiar with some names from LA's real estate circuit, however she has never come across the ladies from Selling Sunset.

"I will say, I look at LA real estate a lot and have never seen any of these people lol either have our agents, who I have obsessively asked," Chrissy tweeted. She also revealed that the names behind the iconic real estate show Million Dollar Listing are very legitimate and she has in fact, bought properties in New York from Fredrik Eklund and John Gomes, the famous brokers and reality TV stars who are part of Million Dollar Listing.