Kangana Ranaut questions drop in Twitter followers as she loses 40,000-50,000 followers a day

Kangana Ranaut's Twitter handle has been the hotbed of several Bollywood controversies in the recent past, and several actors from the industry have opened up about how toxic Kangana's Twitter handle is. Kangana's Twitter page has apprently witnessed a massive drop in follower numbers in the last few days as the actor claims that she's losing 40,000-50,000 followers everyday.

Kangana took to Twitter to talk about the drop after a follower pointed out to the actor that she has lost quite a lot of followers. "I agree I notice pattern every day 40-50 thousand followers drop, I am very new to this place but how does this work? Why are they doing this any idea? " Kangana asked on Twitter and also tagged the accounts of Twitter India and Twitter CEO Jack Dorsey. 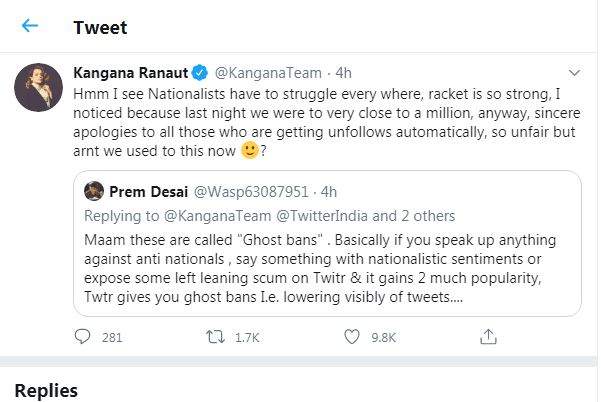 Kangana also talked about so-called 'ghost bans' which she believes is affecting her follower count, after another follower brought it to her attention. "Hmm I see Nationalists have to struggle every where, racket is so strong, I noticed because last night we were to very close to a million, anyway, sincere apologies to all those who are getting unfollows automatically, so unfair but arnt we used to this now," the actor tweeted.