The much-awaited trailer of season 2 of popular web series Mirzapur was released yesterday, and while netizens have applauded the gritty 2:49 trailer for introducing key new developments, some Tweeters have decided to boycott the show. The #boycottmirzapur hashtag had been trending since yesterday, and it's based off the outrage against Ali Fazal, and Mirzapur co-producer Farhan Akhtar's past tweets. Fazal who plays one of the main leads Guddu had protested against the violence that had ensued in December 2019, in relation to the CAA and NRC protests. 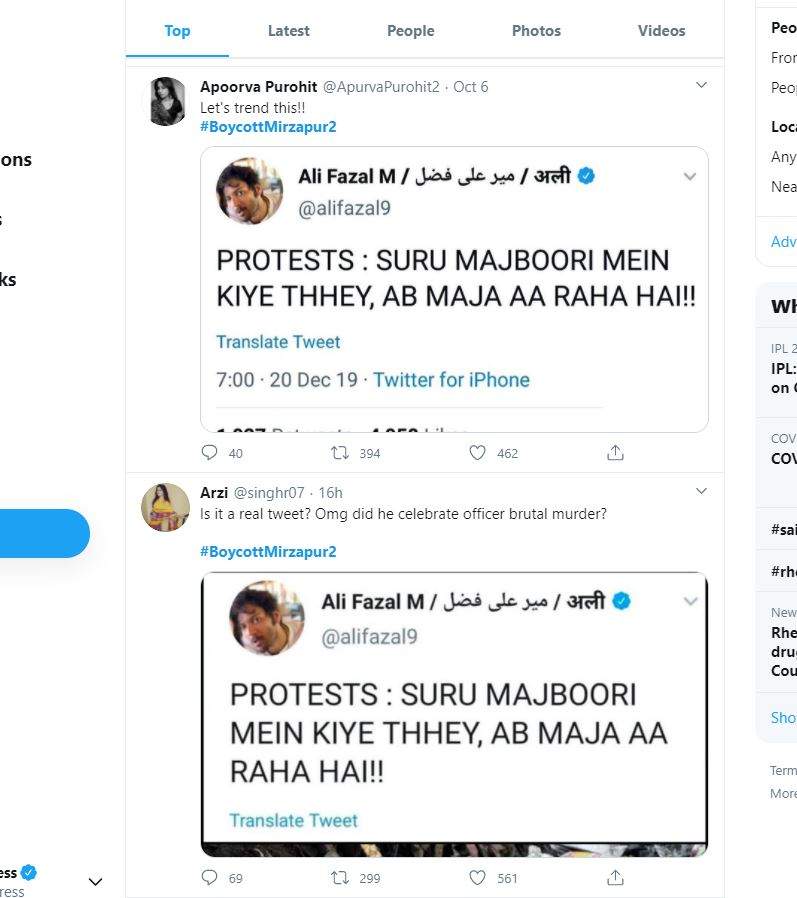 To condemn the violence against protestors, Fazal had tweeted a photo with a dialogue which was spoken by his Mirzapur character Guddu on the show. It read, “Suru majboori mein kiye thhey, ab maja aa raha hai!” Whereas, Farhan Akhtar is being called out for participating in the anti-CAA protests. But besides this niche outpouring of anger, the trailer for the second season of Mirzapur has been mostly well-received; Fazal's character, in fact, will go through a major transformation in the upcoming season which premieres this month on Amazon Prime.

The first season concluded on a grizzly note as many of the main characters including Sweety (Shriya Pilgaonkar) and Bablu (Massey) are killed off during the finale and the newly released character-led teasers suggested that Giddu (Fazal) and Golu (Tripathi) are now looking for vengeance for the death of their loved ones. Succession also seems to be a key plot device for the Tripathi family as tensions mount up between Kaleen Bhaiyya and his son Munna over who's going to be the next mob boss.

"We created the first season with the intent to ‘get our hands dirty’ with a pure hinterland drama; what really surprised us was the worldwide love that’s grown for our local show. The success of the first season has set a benchmark and encouraged us to take the new season several notches higher. Viewers will be in for an immersive experience through the plot twists, character developments and captivating storyline in Season 2!” said showrunner Puneet Krishna. Mirzapur 2 premieres on October 23.