Laughing through the pain: Sarah Jessica Parker on her new series, Divorced

American actress, producer, and designer Sarah Jessica Parker, best known for her multi-award winning role as Carrie Bradshaw on Sex and the City, returns to the small screen as Frances Dufresne in the comedy, Divorce. Created by Sharon Horgan, and set in Hastings-on-Hudson in Westchester County, New York, the show finds Sarah and Thomas Haden Church as an unhappy middle-aged couple going through a divorce, after she has an extra-marital affair. Sarah soon finds courage and decides to start her life afresh with her son and daughter. The actress spoke with Indulge about Season Two of the show:

The season begins with Frances and Robert finally signing the divorce papers, which is a very finite way to open a show. How would you describe the tone of Season Two, compared to the Season One?
It’s a little more hopeful. There was a lot of healthy debate about where we started. Are we starting two weeks later? Are we starting two months later, a year later? Do we consider what happened on the side of the highway, not consider it? Do we deal with it later? And then, we had a seismic shift in that our writer left a couple of weeks before shooting, and our new writer Jenny Bicks came in and they really only had six weeks. Typically, you have four or five months to put together a season of television and that means we lost two episodes. We only got to do eight episodes this season, which is harder. You don’t have one episode to spare. So we jumped in there.

There’s no denying that it was a very painful season to watch...
Yeah, and we had to find our way out of that. You can’t just leave it because you want the audience to like you — you have to do it in an honest way. You can’t sacrifice and betray everything you did in
an attempt to build good relations. So, hopefully, we’ve done that correctly.

Frances seems very much to be finding her way on her own, in both her career, and dating. I was thinking about how strange that must be, as she’s been with Robert since college. Looking at couples who stay together for a long time, it must be strange for Frances, to suddenly be forging a life alone, and sometimes in a house alone.
I’m trying to think how much time I have spent, apart. But I have. And I still do. As much as travelling for work is disruptive for everybody, the other night, I went to Los Angeles, just for one night. And it was like, oh wow, a hotel room, all to myself. I don’t know what I thought I was getting away with but, you know, being alone is nice sometimes.

Frances is very clearly feeling her way into dating, and into what she does and doesn’t want, whereas Robert is moving much faster… I heard this is what men do. This is what I really have heard…
I would say probably, particularly men who are accustomed to being in a relationship. And I’m sure it felt competitive for Frances all of a sudden, that somehow she had to find partnership, too. But, I guess women are, perhaps, at the end of the day, more like cats. I mean, maybe they’re just simply more independent. Especially, I think women that have been independent in other ways and exhibited it in their life in other ways — it’s easier. I can see that Thomas’ character wouldn’t want to be alone. That he would feel ill-equipped to be in the world and date. Like, he just wouldn’t know how to do that, which he kind of says, but to be alone is… just not comfortable.

But when he begins dating seriously, Frances appears to see him in a new light, when she asks him what he thinks would happen if they met now. What do you think she suddenly sees again?
I think she finally sees him be a man, you know, he has this person in his life and you’re seeing him exhibit things that were appealing once that had been dormant because his relationship with Jackie suddenly highlights all the things that she’d forgotten about and dismissed. It’s that old thing about seeing them through someone else’s eyes. I was thinking about that even with seeing my husband through my children’s eyes – how they look at him, when he walks in a room or sometimes how your friends, or his friends, see him when they’re together again. It’s nice to be reminded by people who aren’t in the boring, dreary, day-to-day, minutiae, of what a lot of marriage is when you have children.
A lot of it is organising. All you do is (pretends to text): “Are you going to be able to take James Wilkie to the doctor because I have to go to do press and da da da.” You know, like, “Can we have dinner with this person and da na na na,” “Oh, we have to have this meeting.” lt’s just awful. And so when you are reminded, when you remove all that, and he is a human being who brings joy and conversation and controversy and all these things that are wrapped up, it’s nice to be reminded, yes. I think that’s probably exactly what happens.

And those aspects of him really weren’t in focus last season…
Yeah. And he was kind of a dingbat, like he was acting kind of like an idiot. And she was just kind of cold. She was tough and angry and punitive. When we met last season, we talked about Esther Perel, who wrote Mating In Captivity. And she talks about how we’re going to have several marriages in our lives — they could be with different people or with the same person, but you will change and the
marriage has to change with it. 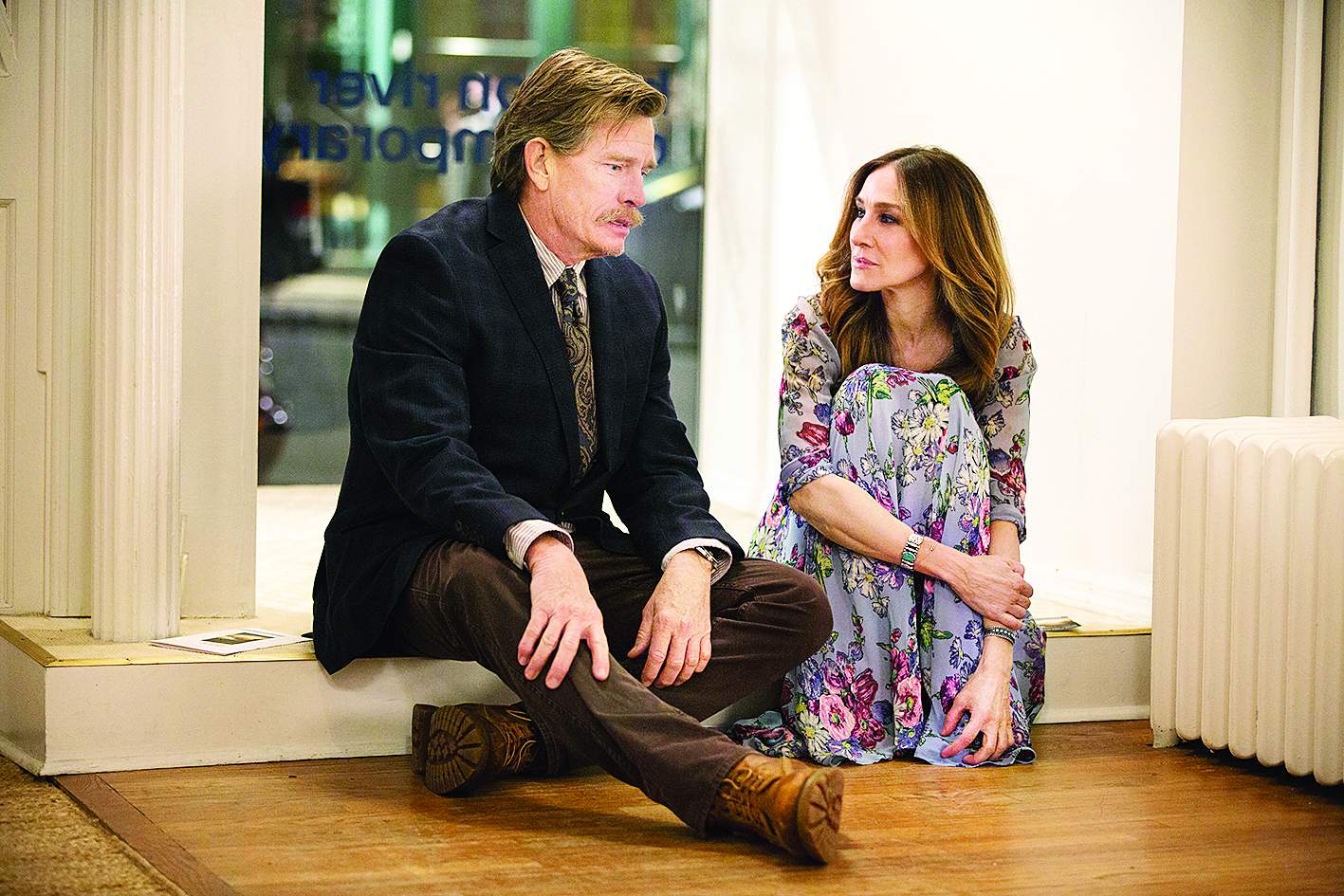 Do you believe that marriage has a shelf life in a way? And that it needs to evolve?
Yes, I think that’s probably true. I mean, if you looked at successful marriages, my guess is you are probably right. I mean, that would probably be scientifically proven in some way because, they, they have to change, and you have to either verbally or intuit it that you are agreeing to the changes. That you both want the new environment and I think you can look at relationships that you know…
you can see when people are still really enjoying each other’s company, enjoying this particular part, this moment, this chapter, this period in their marriage... ‘Oh, that was the museum era. That was the thing era, you know.’ I think they are created, probably out of necessity, and survival. And you either want to have five marriages from the one, or you want to have five new fresh ones.

I note that Frances didn’t give Tinder much of a go. I don’t blame her, but why does she hate it so much?
Yes. I was like, are we really going to do a dating app episode…? If we only have eight episodes, I don’t want to spend it doing a thing with a phone. Like, I really don’t. And I don’t want to do tons of phone calls with phones. We already know the phone was playing a bigger part. And I don’t like phones. I don’t like cell phones in movies and TV anymore. I used to like phone calls. You know, proper phone calls, where you didn’t know who it was. I was against Tinder because I thought it was a waste of real estate. I didn’t feel like that it was our shining moment. I almost wish, if anything, we had found something really depressing like AARP (the retirement non-profit) is launching a beta — that would have been funny. To be, like, AARP? Like kind of freaking depressing, but, on that, you’d look like a teenager, like a spring chicken or whatever. I think we could have made commentary about what it is.

One of the guys she almost dates — Skip, the art dealer — is he based on anyone?
He’s not to my knowledge. Now, Jenny might have somebody in mind, but I think he’s sort of an archetype of the villains of the art world. But we have to be careful, because you can’t just paint everybody in the art world like these archetypes, condescending and superior, because that exists in every industry, so it’s not unique to the art world. I was trying to kind of guard against that a little bit.

And with the other guy she does date, she has to face dealing with confessing to the fact that she had an affair, which she hasn’t had to up to this point. Do you think she struggles with that?
Yeah, and that’s probably real. It’s so objectionable for some. I guess for some women, in particular, it would be hard to admit that, because that’s not the territory they’re supposed to operate in, which is so weird to me, I still struggle with that. I’m not condoning or advocating that people have affairs. I’m just saying… why is that so problematic for people? Why is it so taboo?

How is your book imprint going?
It’s going well. Our first book is coming out in June. It’s beautiful — it’s written by an Indian Muslim woman who was raised in Southern California. And it’s not a memoir, but a story of a family not unlike her own — it’s quite something. Our second book is written by a woman from the UK, Claire Adams, and it’s a book about a family in Trinidad & Tobago. It’s spectacular. Because it’s a literary fiction space, I’m purposely trying to go for global, and lots of new different voices. I’m excited.