Salman welcomes Priyanka on board for Bharat with a witty tweet, her reply is equally warm

Fans of both the stars are excited as Salman Khan and Priyanka Chopra are starring together in Ali Abbas Zafar's upcoming movie, Bharat.

Salman welcomed Priyanka on board with a hilarious tweet in which he mentioned that the movie is going to be in Hindi and not English. But Priyanka, who is very happy to be a part of team Bharat, replied to the tweet in her own unique way.

In his tweet, Salman said, "Bharat welcomes you back home, Priyanka Chopra. See you soon. By the way, humari film Hindi hai," 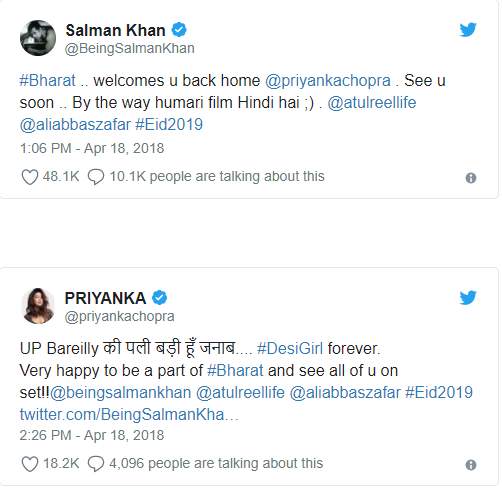 However, Priyanka's reply to that won many hearts. In the reply, she said "UP-Bareilly ki pali badi hun, janaab. Desi girl forever. Very happy to be a part of Bharat and see all of u on set."

Salman Khan and Priyanka Chopra have acted together previously in Mujhse Shaadi Karogi, Salaam-E-Ishq and  God Tussi Great Ho. In Hollywood, Priyanka has two other movies in the line-up and the third season of Quantico begins this month.