PeeCee's new co-star in Quantico is Indian and guess what? He's from Hyderabad!

Vandit Bhatt is an American now, but his Indian side is “still evident for all to see,” he claims. The actor, who was born in Hyderabad, later moved to the US and developed an interest in acting, eventually taking up almost everything that came his way. The gamble paid off, for Bhatt is now one of the main characters in the series Quantico, headlined by Priyanka Chopra. In the show, Bhatt plays Jagdeep ‘Deep’ Patel, the newest member of the elite black ops team. In an exclusive interview, Bhatt talks to us from the sets of Quantico, about his character, working with Priyanka Chopra, and his love for all things Indian – including Hyderabadi kebabs and Dilwale Dulhania Le Jayenge (DDLJ).

Bhatt’s interest in acting developed when he was still a teenager. “When I was in the ninth grade at school in the US, I had an elective, where I could choose a subject outside of my core subjects and I chose drama. I was new in the country and when I got this opportunity, I gravitated towards it. I had a good drama teacher, who motivated me, so I found the early on respect for it (acting). I started doing plays. One thing led to another, and here we are 20 years later,” he begins.

Created by Josh Safron and produced by Michael Seitzman and Mark Gordon, Quantico explores the lives of young government agents as they go through training to become special agents. For the premiere of the third season, the show will be taking its viewers to Italy. The storyline is also said to feature a vicious and frightening villain. Jagdeep Patel is the character Bhatt plays on the show, but the actor remains tight-lipped about his role. “I don‘t want to reveal too much — I want to surprise the audience. But yes, there are a lot of fight scenes that I got to do, so that’s exciting,” he adds. 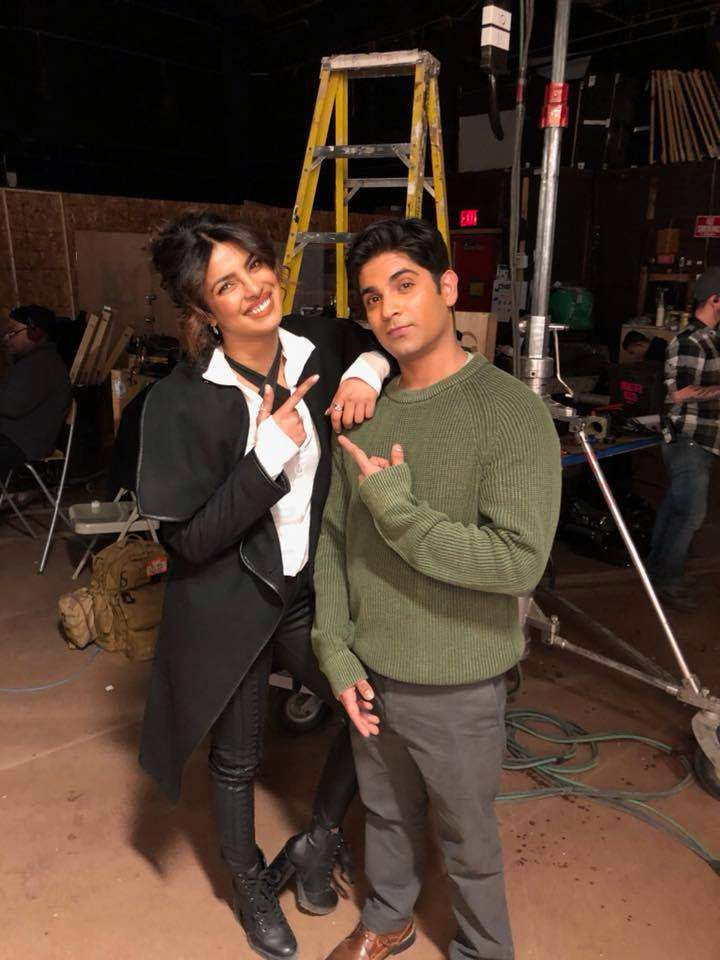 Working with Priyanka Chopra, Bhatt says, was the most enriching experience of his life. “I was really nervous on my first day, to be working alongside her — because it was Priyanka Chopra and I have watched so many of her films. I went up to her and told her I was a new cast member, and she was so kind to me. She took the time and effort to make me feel comfortable. I was really touched by that. Shooting with her has been so much fun. I learned a lot from watching her work. She works so hard, but I have loved every second of shooting with her. I would love to work with her again,” he gushes about his co-star
. But it was not all about work on the sets too. “We bonded over our desi roots,” laughs Bhatt, adding, “I have been in the US for so long, but I am still Indian at heart. I miss the kebabs from back home. Somehow, the kebabs don’t taste the same everywhere.”

Ask him about his favourite movies, and he says, “In terms of the impact it had on my life — and it is such a cliché in terms of being an answer— but I remember when DDLJ came out. I remember feeling like I had never seen a movie like that before. It affected me in so many different ways, I cannot quite articulate it, but I am sure millions of other people feel the same way,” he says.
The actor who has previously been a part of films and shows like The Michael J Fox Show, 42 Seconds of Happiness, Younger, and Token: The Web Series, recently played a younger version of stand-up comedian and actor Russell Peters in the film, Ripped. Ask him if we will get to see him in Bollywood soon, and he says, “I would like to explore what I like to call‚ ‘life roles’. It should sort of reflect the world that we are living in. There are so many different stories out there that need to be told. I would love to do a film with Anurag Kashyap. I love his concept, I love the way he goes deep into the research, the time he spends on each project... It is the kind of work I really respond to.”

Quantico Season Three premieres on April 28, and will air on Saturdays at 9 pm on Star World and Star World HD.