Veteran actor Rishi Kapoor is popular on Twitter for his blunt and rather provocative tweets. A self-confessed motormouth, the actor has often been trolled for making inappropriate remarks on the social media platform.

And the latest incident happened when the Mulk actor failed to recognise the late actress Sridevi in a throwback picture. The two actors have worked in a number of blockbusters such as Nagina and Chandni.

Commenting on one of the throwback picture shared by a fan, Rishi Kapoor asked "What film is this? And I cannot recognise the actress with me!"

Needless to say, people on Twitter got irritated with his ignorance and gave it back to the actor. The comments include:

"Nobody would have recognised you if she had not worked with you in Nagina and Chandni."

"She’s the one who danced better than you in your hay days."

"Come on. you're kidding right!!? you can't identify SUPER STAR SRIDEVI who catapulted your career? either you lost your memory or you're heavily drugged. either way I hope you'll get well soon. chintuji, cognac sharap hoti. sometimes"

"Lady who could manage to match step by step with your dancing skills Chintu Ji. The one and only Late Sridevi..." 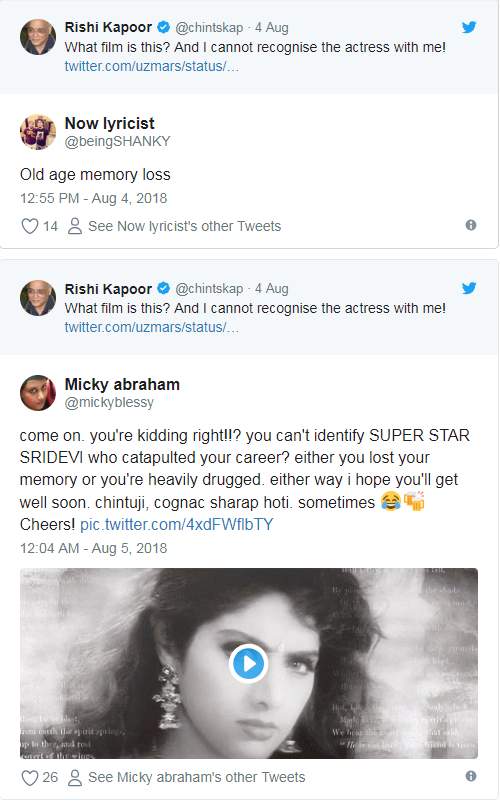 However, the actor has not respnded to any of the trolls or admitted his mistakes.

What film is this? And I cannot recognise the actress with me! https://t.co/NpZlqurrq8