Priyanka Chopra and Nick Jonas make their first public appearance as a married couple at the airport heading back to Mumbai, today. While Priyanka was seen in an embroidered green sari, Nick wore a brown jacket and matching trousers. The Quantico actress was also flaunting red sindoor and traditional bangles. 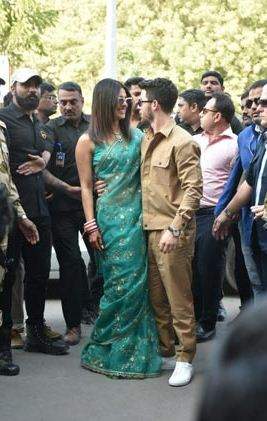 The couple tied the knot in a two-day grand yet private event at Jodhpur’s Umaid Bhawan Palace. After a Christian wedding on Saturday, Priyanka and Nick got married in a traditional Indian ceremony yesterday. Apart from close family and friends of Priyanka, the wedding also had complete Jonas family in attendance - Nick’s parents Denise Jonas and Kevin Jonas Sr, his brothers, Kevin, accompanied by wife Danielle, Joe and his fiancee, Game of Thrones star Sophie Turner, and Frankie Jonas.

The wedding happened three months after the pair was engaged in August in a traditional Indian roka ceremony. The pre-wedding festivities for the couple, who has been on a celebration spree ever since they kicked-off their respective bachelorettes. Their pre-wedding functions included mehendi and sangeet pictures of which the couple has posted.