The journey of a veena from Switzerland to Saidapet

As renowned musician Jayanthi Kumaresh sits facing her altar with the Saraswathi Veena on her lap, going deep into raga Bhairavi, her thoughts drift the far-flung locales her veena has visited. Believe it or not, this beautiful instrument has been to more places than most people have - covering countries like Singapore, Malaysia, Mauritius, Hong Kong, Canada, United States, UK, Germany, Switzerland, Netherlands, Norway, France, Luxembourg, Australia, Bangladesh and Sri Lanka. In fact, over the past year alone, this veena has been to over 30 cities, touching upon venues like the London's prestigious Royal Albert Hall and the Theatre de la Ville in Paris. Here's an unlikely glimpse of globetrotting though the lens of a classical artiste and the one companion she cannot live without - her beloved veena.

The first time I took the veena outside of India was in 1990 to London. At that time, taking a huge instrument like the veena on a plane was a formidable task. We got a huge rectangular wooden box made, which was both oversize and overweight and had a rather interesting shape which made people curious about its contents. I wondered at that time how was I going to carry this instrument and popularise it worldwide, if each journey was as laborious as this one? A 30-city-concert tour through the United States with my guru Smt Padmavathy Ananthagopalan ji back in 1995 was quite an eye opener. I told my guru that if she really wanted me to spread the divine twang of the veena across the globe, something had to be done about carrying it easily. That is when she made a very beautiful veena for me that weighed all of three kgs (half the original weight) which I could carry with me into the plane and that did not compromise in any way in its tone, texture or design. Having travelled extensively to all countries in the last 26 years, not a day passes without my bowing in salutations to my guru who actually made this possible for me. 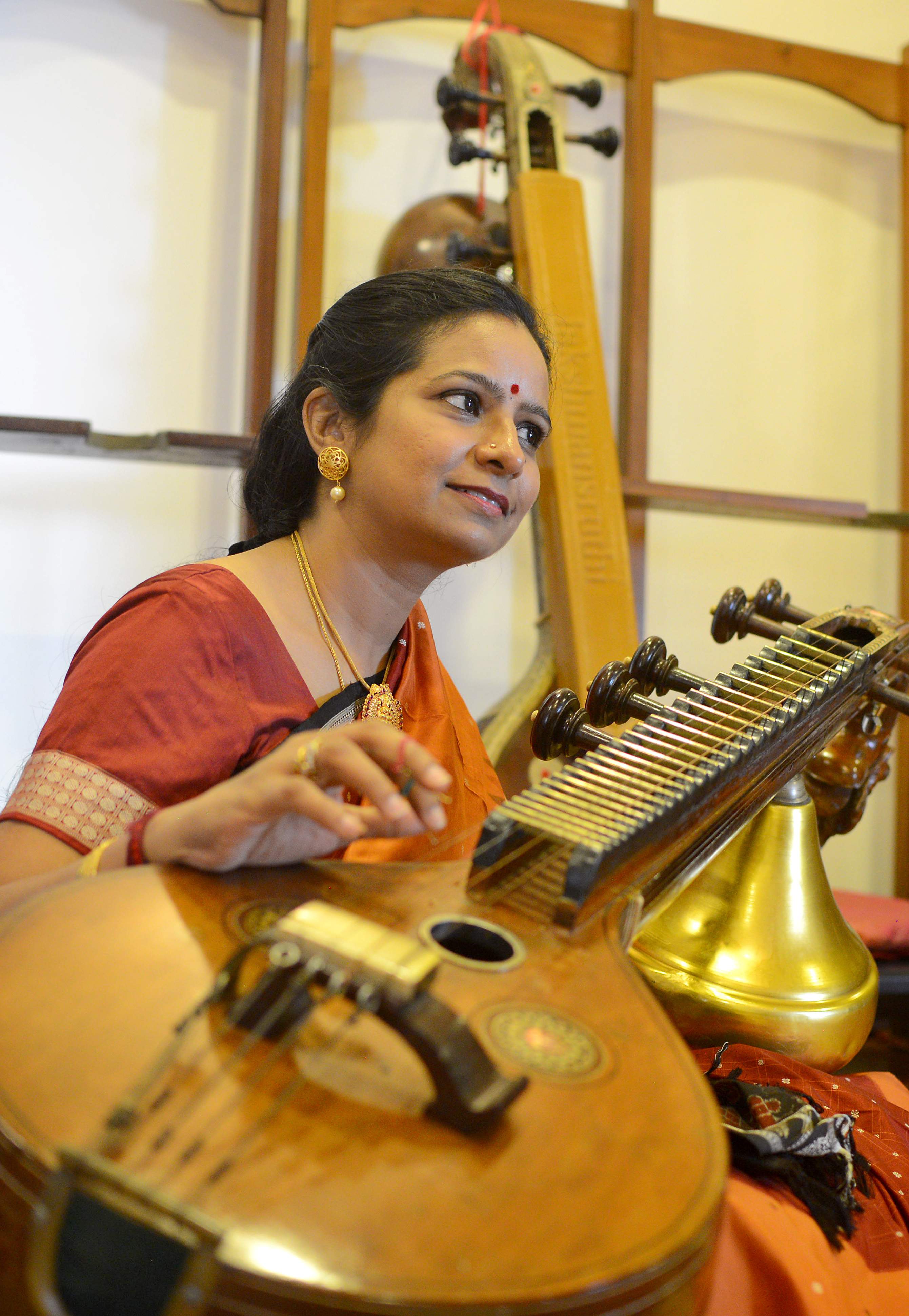 The veena is as old as 2000 years and is as new as tomorrow. 2017 was a wonderful year for the Saraswathi Veena. Representing India and presenting the national instrument of India to the world is a matter of great honour and pride and at the same time, a huge responsibility. This year started with concerts at Glasgow Royal Concert Hall and Mackintosh Church for Celtic Connections in Glasglow, Scotland where most of the audience were seeing and hearing the Saraswathi Veena for the first time. A “Strings Attached” Europe tour along with violin Maestro R Kumaresh in early summer saw the veena being presented in Bern (Switzerland), Rorbas (Switzerland), Frankfurt and Luxembourg. One of the greatest music festivals worldwide is the BBC Proms, at London’s Royal Albert Hall. In August, we presented the Saraswathi Veena and the violin (Maestro R Kumaresh) to a packed British audience. In October, the veena travelled to Australia to perform in Sydney. In November, I performed at Theatre de la Ville, Paris to a sold out audience who were highly receptive to the voice of the veena. I was truly humbled by the ovation, encore and the warmth from the audience.

One does not need in-depth knowledge about the art form to appreciate it. The veena showed that music went beyond language and region. And at long last, last December, the Saraswathi Veena returned home to Chennai to be cherished and celebrated during the Margazhi season. My travels have definitely influenced the narrative of my presentation. My hope is to share the richness of these experiences that I picked up from all these concerts and travels throughout the following year and present it to rasikas from all over the world attending the music season, and beyond.