Michelin-star Chef Atul Kochhar has been sacked by JW Marriott Marquis Hotel after he sent an anti-Islam tweet to Priyanka Chopra, following a controversial episode in her popular television series Quantico. While the actress had earlier apologised, she was blamed by many viewers for being a part of the show but ABC immediately came to her rescue saying that she was in no part involved in the script-writing or direction and it would be unfair to blame Priyanka.

According to various reports, JW Marriott Marquis Hotel sacked the Dubai-based chef at Rang Mahal restaurant for making the comments about Islam. While Atul apologised for his tweet saying that it was insensitive and wrong, he said that he tweeted out in the heat of the moment. He also went on to add that he understands the inaccuracies and deeply regrets the comments which may have offended many. The 48-year-old chef also went on to add that his restaurants are defined by a passion to unite cultures through food and with his tweets he has let his colleagues down and also asks everybody from the world over for forgiveness.

In a statement, JW Marriott Marquis Hotel said that they have terminated the agreement with Chef Atul and he will no longer be associated with the restaurant. Bill Keffer, the general manager of the hotel, also went on to add that the restaurant prides in creating cultural diversity and believe in delivering the traditional culinary experience and high service standards that Rang Mahal is renowned for.

American television show Quantico has faced backlash for its episode titled The Blood of Romeo which aired on June 1. The episode depicts FBI agent Alex Parrish played by Priyanka Chopra, in a situation where she prevents a terrorist attack before a summit between India and Pakistan. However, during her investigation, she happens to find a Hindu religious symbol which makes her conclude that Indian nationalists were involved in trying to make it look like Pakistan had done it, which implied that Hindus were terrorists.

Here is the original tweet by Chef Atul Kochhar 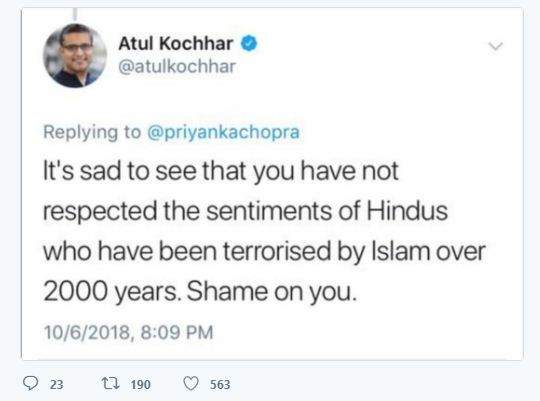 The chef has, however, apologised for his earlier tweet.