Veteran actor and film director J Mahendran passes away at 79

Veteran actor and film director J Mahendran passed away on Tuesday morning, following a brief hospitalisation. He was 79. His son John Mahendran confirmed his passing on social media. Filmmaker AR Murugadoss took to Twitter to pay homage to the director. He wrote: “It is deeply saddening to hear the demise of one of the pioneer filmmaker #Mahendran sir. You and your films live forever in our hearts sir. Rest in peace.” 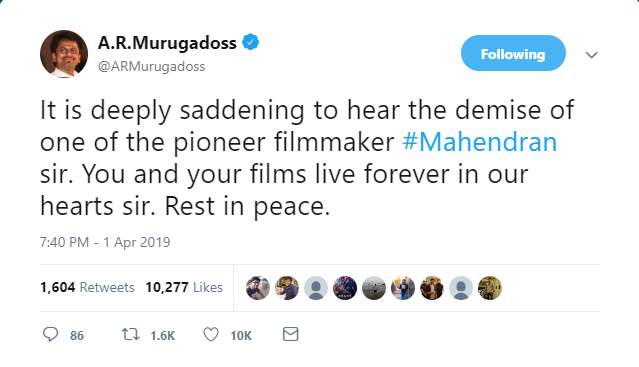 Mahendran has directed popular films including Mullum Malarum, Johnny and Nenjathai Killadhey. He was recently seen in Vijay Sethupathi’s Seethakaathi, the Rajinikanth starrer Petta and Boomerang, starring Atharvaa Murali that released earlier this month. Known best for his writing, he is also a part of the Blue Ocean Film and Television Academy(BOFTA) in Chennai where he is the head of the filmmaking and direction course.

Public homage for Mahendran will be held from 10 am and his last rites will be performed at 5 pm on Tuesday.