Interview: AB de Villiers gets candid about his life, personal interests, and his favourite Indian dishes

AB DE VILLIERS hardly needs an introduction, such is the stature of the cricketer. Scoring the world’s fastest One-Day International (ODI) half-century, century and 150 are just a few records he has to his name. Currently in India representing Royal Challengers Bangalore in the Indian Premier League (IPL), he was in the capital for the launch of his personalised collection of travel bags, with the luxury brand, Mont Blanc. Indulge caught up with the South African legend and spoke on a range of topics, including his love for music, his family as well as his tryst with the ‘gentleman’s game’. Excerpts from the conversation:

How and why did you start playing cricket?
I have two brothers who were into cricket. I used to carry drinks for them while they played in the backyard of our house. My reward would be getting to bat at the end of the day! Sports is in my blood. I excelled in cricket at school, and always wanted to take it a bit further. I have not done too badly. (Laughs.)

A cursory check on Google shows a variety of results with regard to your extra-curricular activities. How many of them are true?
Some of them are true, while others are not. I have played almost all sports growing up, but was not as good as mentioned. Like in the case of badminton, it is claimed that I was U-19 national champion. That is not true. There is also another lie being peddled stating that I was a recipient of the prestigious national medal from the Late Nelson Mandela for science projects.

Which other sports were you good at, apart from cricket?
Tennis was one of my strongest suits. Also rugby. It was very popular in my school. But slowly, as the years went by, my priority became cricket. But I loved playing tennis and rugby.

Do you watch other sports in your free time?
I love watching tennis and golf. Earlier,  I could not always make time, but post-retirement, I try and watch as much as possible.

Favourite tennis player?
(Laughs.) That’s a tough question. My heart says Roger Federer, but the sheer perseverance of Rafael Nadal and Novak Djokovic is admirable. I can connect with them a bit more, because of the effort they put in. Federer is a bit classical, prim and proper. Basically perfect! I can’t take one name because I really enjoy it when any one of them win something. It’s great that I belong to an age where tennis is of such high quality, and all three keep having their moments.

How good is your golf?
I absolutely love the game. I was quite good, but not good enough to take it up professionally. I play the sport with my mates, when I go back home. Till the age of 15-16, I used to play a lot.

Did you watch Tiger Woods’ triumph at the Masters?
I watched every single shot. I was glued to the TV screen. I remember, I told my Royal Challengers Bangalore teammates: ‘Sorry boys, I won’t be coming to practice for four days. Catch you later!’ (Bursts out laughing.)

You were quite good academically as well. How did you juggle sports and studies? And, do you have any tips for budding sportspersons in India?
Balance is very important in both sports and life. If you can’t, you will fall off the rails at some point in life. Academics is also an important aspect, and all aspiring athletes should complete a basic level of education, as it will help them in the long run. My parents brought me up in such a way that I understood the importance of maintaining balance, and they really supported me in all my endeavours.

You keep talking about your childhood. What was the best part about growing up?
Without a doubt, my school life. I wish I could go back. My three best mates are from school, and the four of us have come a long way, but our relationship and dynamic has not changed even the slightest. Whenever I go back home, we make it a point to catch up.

Your friendship with current South Africa captain Faf du Plessis is the stuff of legends. When did you guys meet, and how did the friendship start?
I met Faf when I was nine years old. Initially, we used to play cricket against each other. We finally played in the same team when we joined the same high school at the age of 14. The rest, as they say, is history!

You made the national team much earlier than Faf. Did your friendship suffer? If not, how did you guys still manage to keep things so smooth.
I’m aware of such things, as it happened all around me. But personally, that was never the case, mainly because of the way I was brought up. I was always taught the importance of relationships instead of focusing only on myself. And that has remained with me till date. Someone who is my friend will remain so till the day I die.

How did you help Faf in his career?
I still remember him calling me up one day to say he was thinking about leaving South Africa, and going to England to further his career, because a national team call-up was still not forthcoming. I told him to stick around a little bit longer, because you never know when opportunity comes calling. And ultimately, it worked out nicely!

Favourite subjects while growing up?
My parents are doctors, so I grew up fascinated with the human anatomy. I saw quite a few things growing up! In school, I excelled in biology. Believe it or not, I was also good with numbers. You can ask me to verify, if you want!

Tell us about your association with Mont Blanc.
It’s a huge honour to be associated with the brand. I never thought in my wildest dreams that I would get the opportunity to be involved with a brand like this. It’s a privilege, and they have amazing products. And my wife also really loves using them!

You collaborated on a bilingual pop album titled Maak Jou Drome Waar (Afrikaans for Make Your Dreams Come True) with a friend and South African singer Ampie du Preez. How did your love for music begin?
The credit goes to my parents. They made me listen to some incredible music when I was growing up, the real deal as I call it. My grandfather was a great songwriter and that’s how I think the entire songwriting process started. It must have been passed on to me! (Laughs.) I love writing songs but the performing part I’m not that good at, as I’m quite shy. But the writing and producing part comes quite naturally to me.

Your favourite artistes growing up?
There are too many to name, to be honest. I love the old-school stuff. Billy Joel springs to mind instantly. I keep jamming to Snow Patrol. I like the recent stuff as well. According to me, a good song is a good song, irrespective of the genre. I really relate to the words. A lot of people are into the melody aspect, but I always listen to the words to try and understand what the songwriter wanted to convey.

You are an accomplished guitar player as well. Any other instrument that you’ve tried to play?
I’m not that great a guitar player. (Chuckles.) I had a few piano lessons growing up. I memorised some of the classical parts to impress my wife. She is an incredibly talented pianist, and you can always listen to the sound of a piano in my house.

You proposed to your wife Danielle Swart in front of the Taj Mahal, in 2012. Why did you choose the Taj?
It’s a long story actually, and a long trip as well! I was supposed to be in India for a few months. I decided to get serious and while travelling around the country, I had the thought of visiting the Taj Mahal. Despite coming to India numerous times, I’d never actually got around to visiting the famous monument. Once I reached, the thought of proposing entered my mind, and what better place than the monument of love! I’m glad I chose the Taj, and now, it’s a memory to cherish for both of us,
for the rest of our lives. I’ve never visited since then, but I really want to take my sons there soon.

Your favourite Indian food?
I’ve fallen in love with Dal Makhani, to be honest! You just give me a few garlic naans on the side, and I will polish it off. (Laughs.) I eat it every couple of days, and I make my teammates also eat it. The way they put cream on top... India is a fantastic country with regard to the food on offer. Every state has its own unique specialties, and be it vegetarian or non-vegetarian, the food is just too good.

A lot of foreign cricketers complain of spicy food and suffer from stomach-related problems while in the country. Your take?
Rubbish. It’s not spicy at all. Just the way I like it. 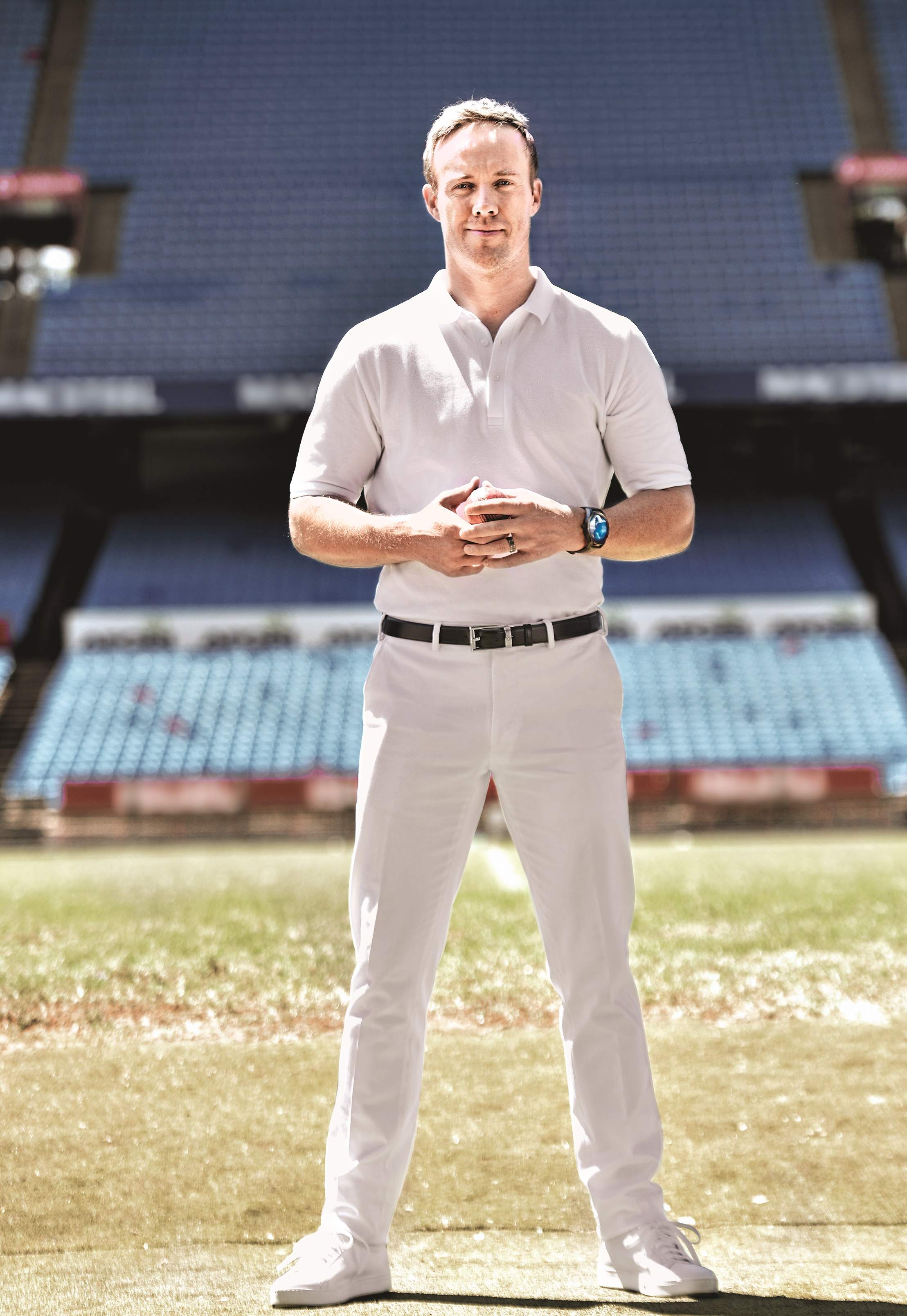 His jersey number is also 17.

On 23 May 2018, he announced that he
was retiring from all forms of international cricket.

AB made his Test debut as a 20-year-old
on 16 December, 2004 against England at
Port Elizabeth.

On the Mont Blanc ‘AB Loves India’ collection
The range of bags will be available online. The bags have been designed by Hakim Idriss in a way that they reflect all the things that I love about the country. The money raised will go to the Tamahar Foundation in Bengaluru, which works for kids with physical or mental disabilities.

Nicknames
Abbas, or Abs. These are the most popular.
I have a couple of private ones that my wife calls me by, but I can’t reveal them here!

Fitness routine
The most important thing is that I try and make it a point to enter the gym daily. Even when I’m outside, running and diving about during fielding drills is a great way to keep up your fitness levels. My main advice will be to go outside and enjoy yourself. Don’t be sedentary. Fitness is your choice.

Unfulfilled plans
I have never gone skiing before, and I really want to go on a ski trip with my wife at least once. I want to visit Switzerland for that. In fact, any place with snow would do.