Big Machine Record label’s head, Scooter Braun finally broke his silence on the six-month-long feud with Taylor Swift. Posting a public plea on social media, Braun tagged Taylor in the post and stated that he had been receiving anonymous threats.

"Since your public statement last week there have been numerous death threats directed at my family," he wrote. "This morning I spoke out publicly for the first time saying I wouldn't participate in a social media war. However, I came home tonight to find my wife had received a phone call threatening the safety of our children, as well as other threats."

He went on to add, "Thinking of my wife and children, my team and their families, I have gone through a range of emotions on how to deal with this...  am certain there is no situation ever worth jeopardizing anyone's safety." 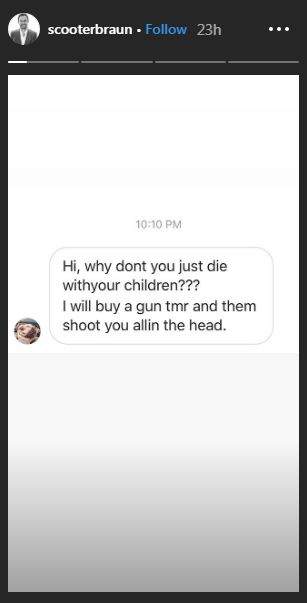 "This is a world filled with toxic division where people express their opinions over social media instead of having conversation in person," Braun stated and added, "While I am frustrated with your accusations and respectfully disagree with many of your statements, it is important that I am clear -- no artist should ever feel cornered or bullied. I have spent my entire career in service of creatives and artists, never the other way around."

"As the world now knows you can and should perform any song you would like at the AMAs. I have never and would never say otherwise. You do not need anyone's permission to do so legally but I am stating it here clearly and publicly so there no more debate or confusion." Scooter shared.

Braun ended the statement by asking for a direct conversation with Taylor to find a "resolution." "I continue to wish you the best and hope we can resolve this," Braun concluded.

Scooter also shared a screenshot of one of the messages sent by an Instagram account, threatening Braun and his family.