Telugu actor Allu Arjun's children, Ayan and Arha, have always been popular on social media. Today, on the occasion of Raksha Bandhan, their dad has posted yet another adorable picture of the two munchkins.

Allu Arjun tweeted an image of his children along with Raksha Bandhan wishes. Arha, the daughter is seen putting vermillion on the forehead of her brother, Ayan. Here's the picture: 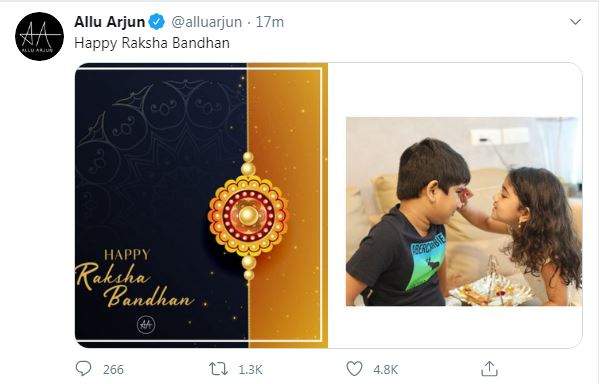 Within a few minutes after posting, the actor's tweet was retweeted 1.4K times and counting. While Ayan is daddy's baby, Arha is his princess.

Though Allu Arjun is a superstar in South India, he has a loyal fan following in the North as well. On the work front, the actor has announced his next film titled AA 21. He shared a poster of the film on Twitter. The poster shows two men looking at the ocean. The actor tweeted saying, "Very much elated to announce my next film #AA21 with Koratala Shiva garu. Been looking forward for this for quiet a while. My best wishes to Sudakar Garu for his 1st venture. Sandy, Swathi & Nutty this is my way of showing of my love for you guys."