'Glee' actress Naya Rivera who was missing after going for a swim with her son, has been confirmed dead. US officials found her body on Monday.

The Ventura County Sheriff, Bill Ayub, revealed the information through a virtual press conference. "We are confident the body we found is that of Naya Rivera," said Ayub, pointing to the location, appearance, clothing and condition of the body. 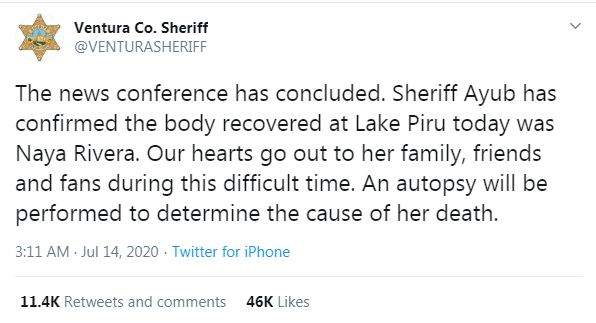 Naya drowned last week during a boat trip with her four-year-old son, at Lake Piru. The actress' body was retrieved and sent for an initial examination, and officials said they found no evidence of foul play or suicide. A full autopsy was conducted at the medical examiner's office to confirm her identity from dental records.

The 33-year-old Naya who rented the boat to go to the lake with her son is believed to have accidentally drowned. She was missing since Wednesday afternoon, and her body was found nearly six days later after a massive search operation.

Her son is reported to have said to the investigating officers that, "he looked back and saw her disappear under the surface of the water." The actress saved her son just before she drowned. Sheriff Ayub said the lake's strong currents could be a cause of the fatal accident. "The idea perhaps being that the boat started drifting -- it was unanchored -- and that she mustered enough energy to get her son back onto the boat, but not enough to save herself," he said.

The lake has been closed to the public since Wednesday. Search teams are reported to have used footage from video messaging calls Rivera made from the boat before her disappearance.

Naya was known for her role as the high school cheerleader Santana Lopez in Glee. She is the third cast member from Glee to have died. In 2018, actor Mark Salling took his own life before being sentenced for possessing child pornography. Actor Cory Monteith died in July 2013 because of an overdose of drugs and alcohol.