Filmmaker Anurag Kashyap says he cannot comment on his brother's post; tweets, "Abhinav had told me clearly to stay out of his business"

Dabangg director Abhinav Kashyap called out Salman Khan and his family on his Facebook post, alleging them to have sabotaged his career. The post came as a reaction to actor Sushant Singh Rajput's death on Sunday.

Abhinav is filmmaker Anurag Kashyap's brother, however, the latter has tweeted saying he has nothing to do with his brother's post on social media. "For the media calling me and people who want to ask , treat this as my statement. “More than two years ago , Abhinav had told me clearly to stay out of his business and it’s not my place to comment on anything he says or does.“ Thank You (sic)," tweeted Anurag. 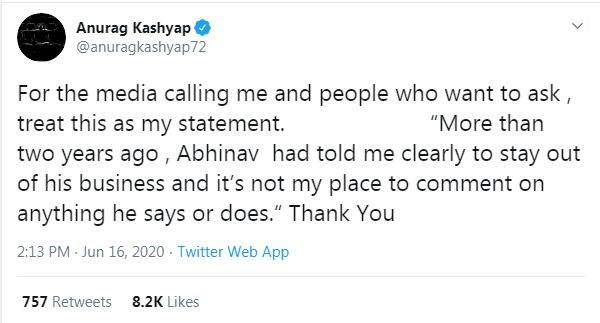 Abhinav's last film was the 2013 action-comedy, Besharam. The director in his post revealed how Salman's brothers Arbaaz and Sohail jeopardised his career. Abhinav had started his career as a writer with Jung in 2000.