Late actor Sushant Singh Rajput’s sister Priyanka Singh took to Instagram on Monday to share a picture of the three sisters sitting next to Sushant’s photo during a prayer meet that took place on his first death anniversary.

In a note to her late brother, Priyanka spoke about how life had changed after his death. She wrote, “To put it simply, life without you is not the same. Your presence is now as visceral as it is vital. You truly have become immortal... like forever. And yes, finding myself in this god-forsaken world without you, I suffer from survivor’s guilt (sic).”

Also read: On Sushant Singh Rajput’s first death anniversary, here's a look at some of his most insightful dialogues

Priyanka also wrote about dealing with the loss of their mother and Sushant, and said the family felt a range of emotions varying from agony to rage to hopelessness. She wrote, “After mom’s departure, we had inspiration to make our lives worthwhile as a tribute to her love. While your absence has rendered it totally devoid of any bearings, mercy or hope. The plethora of emotions that is our constant companion now, ranges from numbness, helplessness, hopelessness to desperation, anguish, agony and rage (sic).”

She added that she felt Sushant’s presence with her. “Though your physical form no longer graces this earth, you are ever so close and present in each moment of our lives - walking, sleeping, dreaming, throbbing in us with every pulse of life,” Priyanka wrote.

In a separate post, Priyanka shared a picture of Sushant’s pet dog Pooch gazing at a photograph of the late actor and wrote, “Also, those who are instrumental in your eradication should know it only too well that they have to pay. Law of Karma is law of Energy therefore exact and infallible. And for the first time I have this divine inspiration to pray: ‘For those responsible for this diabolical sin, May the wrath of Shiva (Nature) be upon you all with full force’ (sic).” 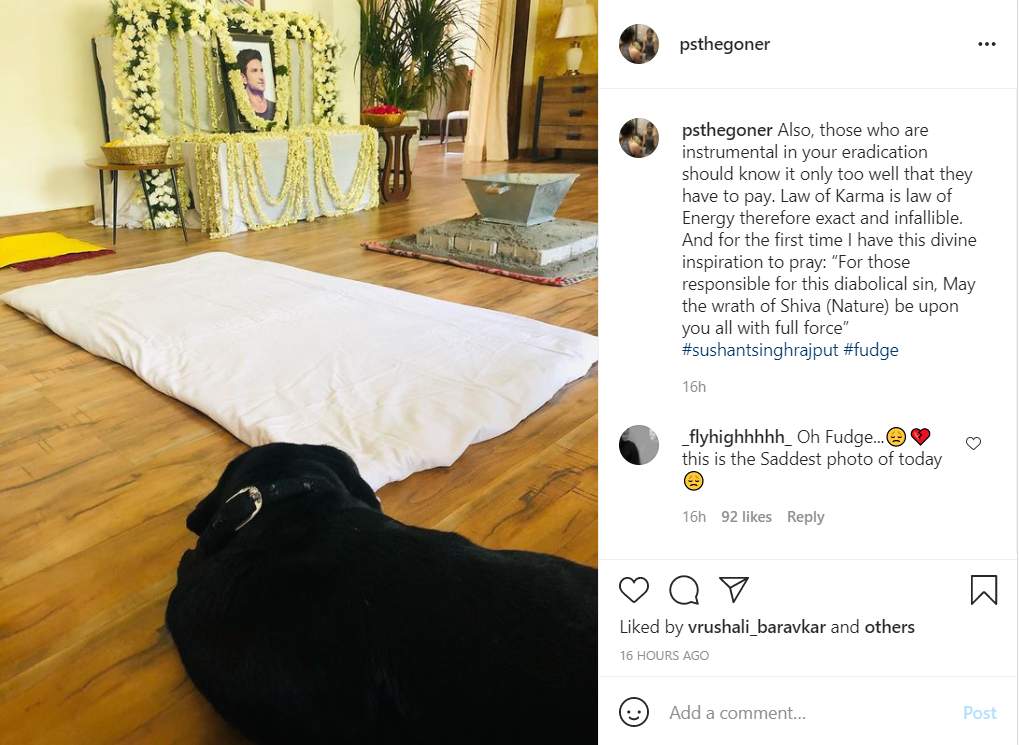