The Force in our Stars: Daisy Ridley and Mark Hamill on The Last Jedi

With some of the early reviews indicating that Star Wars: The Last Jedi might be the best movie in the
franchise since the 1980 instalment Empire Strikes Back, it seems that the Force is truly with the former’s director, Rian Johnson. Set immediately after the culminating events of The Force Awakens (the 2015 prequel directed by JJ Abrams), the latest instalment sees an eager and confused Rey (played by Daisy Ridley) trying to convince Luke Skywalker (Mark Hamill’s iconic character) into rejoining the Resistance, to help defeat the First Order. In exclusive interactions with Indulge, Daisy and Mark share their thoughts on the movie, apart from some nostalgic moments during shooting.

Where do we find Luke, at the start of this new film?
Mark Hamill: It’s a direct continuation of The Force Awakens, so the final moment is the first time you see him in The Last Jedi. It’s very ambiguous. Rey (Daisy Ridley) offers him the lightsaber, and he just stares at her, interminably.

What was it like to walk back into the Millennium Falcon?
MH: It was bittersweet. Every-where you looked, the memories come flooding back. It’s like going to your old high school or the house you lived in sixth grade. The detail’s absolutely perfect. It’s just as
I remember it. I climbed up and down the ladder, got in the hold where we stowed away, and sat in the cockpit with my grown children and wife. Later, I slipped away and got really choked up. This is a moment, and it’ll be gone.

How is The Last Jedi with director Rian Johnson a different experience?
Daisy Ridley: It is a different experience, as energy-wise, Rian and JJ Abrams are different. They are similar in their fan-boy thing, and they both know the universe so well, and being a writer and director, all those similarities are there, but their energy is different. Rian has put the emphasis more on Rey pushing Luke. It opens up the Rey journey. It’s not clear where Rey is going, but in her trying to win over Luke, the development comes.

And what is Rey trying to do?
DR: She’s basically trying to convince Luke to leave with her, and go back to the Resistance. And Luke is totally hard on her. Pretty harsh, actually. But, she persists, and crazy stuff happens.

What is Luke’s relationship with Rey?
MH: It seems to be an obsession for people to want to know what the relationships are, and that’s understandable. So much of the previous stories have to do with lineage: Who’s your father, who’s your surprise sister, who’s your mother? In this, it’s broken down a little bit. 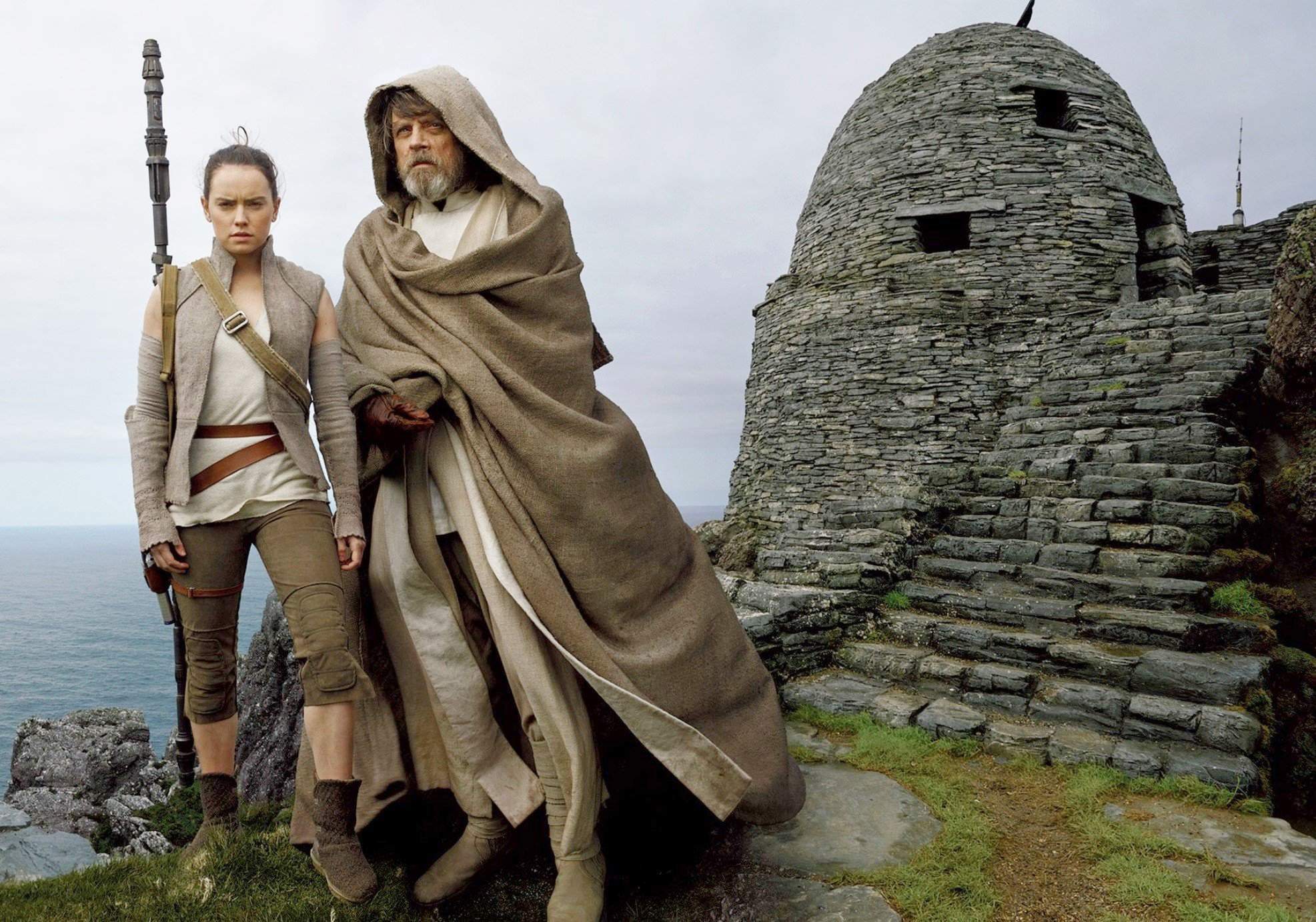 So what do they think of each other and learn from one another?
MH: Rey has based her assessment of Luke on this great mythology that’s been built up. At some point, people doubt he’s a real person. Because of the gravity and urgency of the situation, she doesn’t have the luxury of getting to know him, and relax and exchange ideas. She needs him and wants to enlist his help and abilities towards her cause. And, that’s the conflict. Luke’s in a much different place than we’ve ever seen him in before. He’s disillusioned. He’s turned off the Force and renounced the idea of the Jedi order. It was unexpected for me as an actor. My character always represented hope and optimism. And now, here I am, pessimistic, disillusioned, and demoralised.

Is it exciting to play someone with all these powers?
DR: Rey doesn’t see herself as this powerful being, and in seeing Luke as that is a reflection of what people see her as. They talk about her potential, and she doesn’t really feel it. But she does start to come around. She tries to move forward and do the right thin like she has always done.

Is there a different intensity in this film?
DR: It’s definitely more intense. But it’s nice, there are little breaks of air. But, everyone seems to be comparing this to The Empire Strikes Back. And Empire was darker. I think we have a nice balance. There are so many stories happening simultaneously that we didn’t have before. I think there will be a nice balance. But there are those brief moments, where I wasn’t expecting it in playing the scene that is quite funny.

What does Star Wars mean to you?
DR: It does sound like a cliché, but it means something entirely different now than it ever did before. Now, I get to be a part of this amazing thing, and represent this cool person that is speaking to a lot of people, and work with really amazing people and be on a set with the most incredible crew, ever. It’s wonderful. Really wonderful. 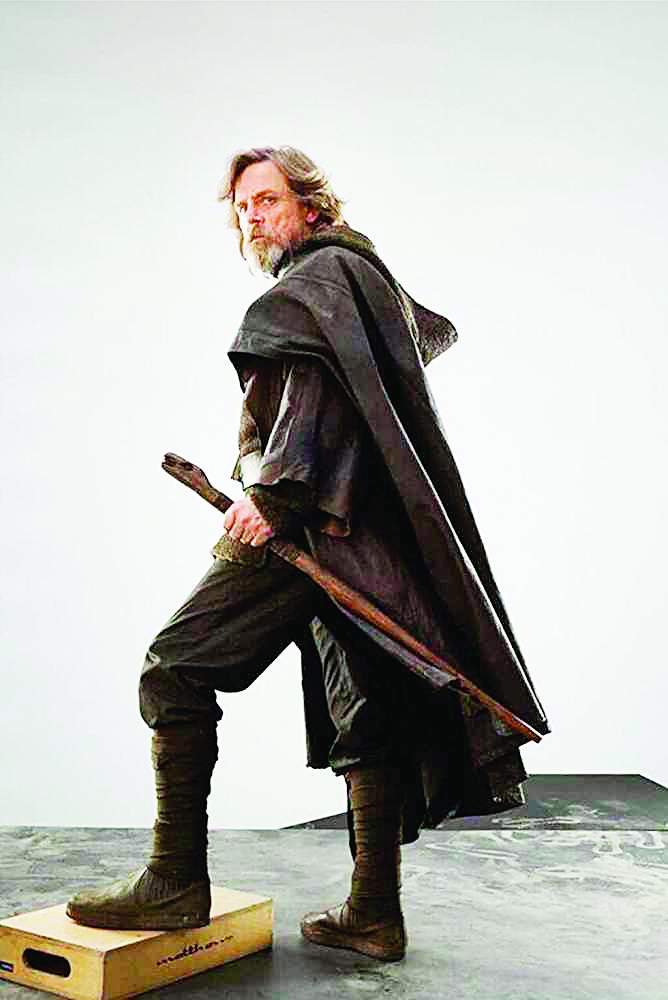 Do you have a favourite Star Wars memory as well?
MH: There are so many that I can’t single one out. I really looked forward so much to doing the Cantina sequence. It’s an experience I’d never forget. The Cantina sequence, swinging across with the Princess. We were in harnesses and flown by the people who developed that system to fly Peter Pan.
In the old days, you could just swing back and forth. In 1953, for the Broadway production of Peter Pan, the Jerome Robins one with Mary Martin, they developed a system where you could go back and forth, but also another way. It takes two operators, which is a great skill because you have to be in complete sync. So, we’re both in harnesses, they hooked us together, and we did the swing across. So much fun!
I was ready to do it again, but they had four cameras and got it in one take. Everything else takes five, six, seven takes. I was so disappointed. Someone said, “You really want to fly? Unhook him from Carrie.” They flew me all around the set. It’s the closest to playing Peter Pan I’ll ever get. Of course, George Lucas was appalled, because I’m a commodity. I smack into the wall like Wiley E Coyote and
slide down. He said, “No, no, get him down.”
It’s those kinds of moments. It’s just one after another. I loved all this adventure as a child anyway, and to have this amalgamation of all these films — Westerns, WWII movies, cowboys, pirate movies — all mushed together in this new way, day after day, was wonderful. I couldn’t believe I got to do it. Is there one moment? No. There are a million moments.

Will this be a special film?
DR: I think Rian has written a story that people won’t expect. I think everybody gets their moment to progress. And, even though it’s the second episode in this series, it’s its own thing without just leading onto the next one, which is great. Some of the stuff that happens will surprise people.