Can you watch all 22 Marvel movies back-to-back in an insane 59-hour marathon?

Pop culture enthusiasts have never had it so good. This month (April 2019) marks the arrival of the final Game of Thrones season; sneak peeks of Todd Philip’s Joker; the release of Mortal Kombat 11; a much-awaited DCEU movie in the form of Shazam!; and the culmination of the Marvel Cinematic Universe’s 22-film-long story arc.

Speaking of which, some fans are so eager to watch Avengers: Endgame before the rest of the planet that they are willing to lose sleep and sit through a 59-hour movie marathon within theatres! North American theatre chains AMC and the Alamo Drafthouse are the brands hosting this mega event. The brand’s website states: “Starting Tuesday, April 23, see 22 films from the Marvel Cinematic Universe all leading up to MARVEL STUDIOS AVENGERS: ENDGAME. This premium event will include, marathon only collectables, and a special concession offer. Plus, AVENGERS: ENDGAME will start at 5 pm local time, one hour earlier than regular public show times.”

Experience the @MarvelStudios 22 Movie Marathon at AMC Theatres on April 23. Hurry and get a ticket now: https://t.co/eXpE6VrxBi pic.twitter.com/82ckvV0XC7

Movie marathons aren’t an uncommon occurrence in the pop-culture realm, any Star Wars fan will tell you that. However, two and a half day long marathons are unheard of—even amidst fans who have watched Infinity War 100 times in theatres!

The fandom is already charting out game plans and Red Bull breaks to power through this gargantuan task. Most hint at sleeping through Thor: Dark World, Incredible Hulk, and Iron Man 2. Here’s the itinerary: 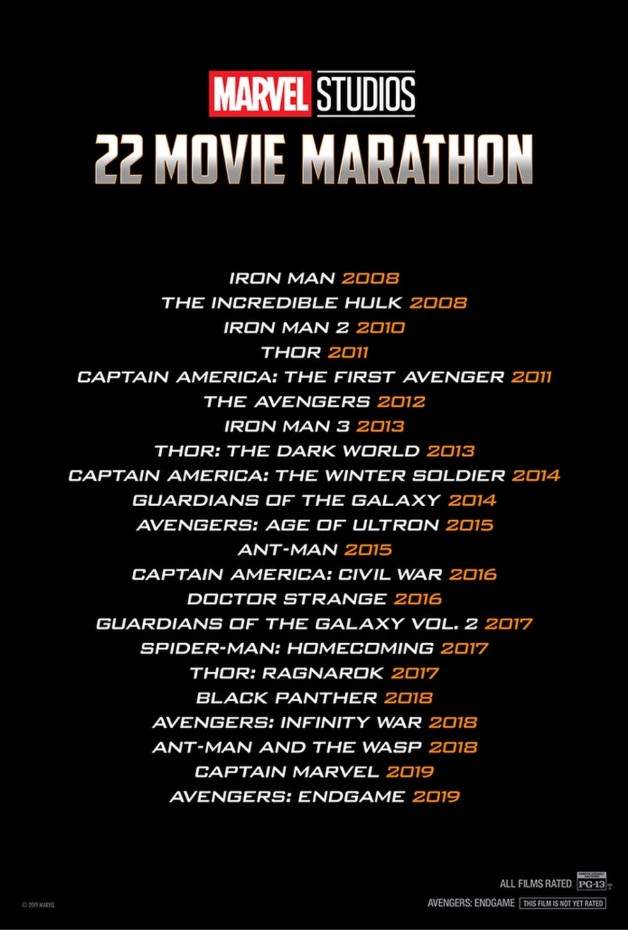