Arnold Schwarzenegger walks in, offering jelly beans. With fleeting visuals of the man wielding his Winchester Model 1887 shotgun in Terminator 2: Judgment Day flashing in my head, I pick up a couple of them, and point out to Linda Hamilton that she is pretty great in Dark Fate. “I still haven’t watched the film. I will see it in a week,” she says. Arnold interrupts, “Linda, do you like jelly beans?”, with the same raspy voice with which he famously uttered in Terminator 2: Judgment Day — “Come with me if you want to live.” The almost curt “no” from Linda betrays their familiarity, aided no doubt by their teaming up once again for this week’s release, Terminator: Dark Fate. The friendly banter continued throughout the conversation in the suite room of a star hotel in Seoul, South Korea. Excerpts:
­
What about Terminator: Dark Fate made you come out of your hiatus Linda?
Arnold: That is such a lame question.
Linda: The question wasn’t for you, Arnold.
Arnold: I thought we will wake everyone up from their after-lunch slumber (smiles).
Linda: I felt that it was interesting to come back after all these years later as an actress; I thought I could fill in the gap of 28 years with my own story — a story that isn’t necessary told on screen but will be told by the work that I do and by the wrinkles on my face. I wanted to do something new with Sarah Connor. And being this age and Sarah Connor, that’s new.

A lot has changed in both Hollywood as well as the Terminator world in the last three decades. How does Dark Fate fit into this new world?
Arnold: Well, to be honest with you, as far as we are concerned, not much has changed. Irrespective of whether they are silent films all those years ago or if it is today’s most sophisticated ones with brilliant special effects, a great story is still important. It has to be a universal story that sells on any continent in the world. There’s one thing you don’t want to do and that is to do a film just for America. That’s perfectly fine but let someone do a local film for a smaller budget of say, $4 million. But when it’s something as huge as the Terminator franchise, you want to have a story that we can take to Africa, Middle East, Asia, Australia, Russia and Europe.

Based on your social media posts, I think it is safe to conclude that you are quite excited about this film, Arnold.
Arnold: It is exciting. The masterstroke by Jim (James Cameron) was to bring Linda back to the franchise. Both Linda and I were extremely happy to know that Jim was committed again to do another Terminator film — so much so that he ended up writing and producing it, plus choosing the director and even the rest of the cast. He is so good with all these. I am glad that the old team got back again and I understand when people say that Terminator: Dark Fate sounds like the first and second Terminator films put into a blender and served.

Do you suppose a film like Terminator: Dark Fate could have been pulled off back in 1984?
Linda: No, with how far things have come now, we can guarantee that it would have been bad if we had done this in 1984. I don’t know if anybody would have dared to do something similar to what we have done now — how do you shoot a plane falling from the sky with people floating in it in zero gravity and two machines fighting weightless in the air? The Sarah in the first film was a regular girl thrown into an arduous situation, and the second one saw her be pushed to save her son. What is she up to now, after all these years? Linda: The best part about playing a character like Sarah is that you get to see her take a journey. If I came back just like the last Sarah Connor who is trying to protect her son, I don’t think it will give the same impact as what Terminator: Dark Fate will. Sarah has changed, and not for the better. She is no longer on a mission, so she’s lost and broken, and I thought that was a great way to open a film. She has very little humanity left in her and it would not be an understatement to say that Sarah is less of a human being when compared to the T-800.

Sarah Connor was one of Hollywood’s earliest female action characters. How do you see the evolution of such roles in today’s times?
Linda: There have always been strong women on screen — right from the ’40s and ’50s. They weren’t necessarily action stars though. It’s great that we have that now. Things tend to go in waves. People are quick to tag it as woman empowerment, but I strongly believe that women have always got to play strong roles that show different strengths of them coming out. 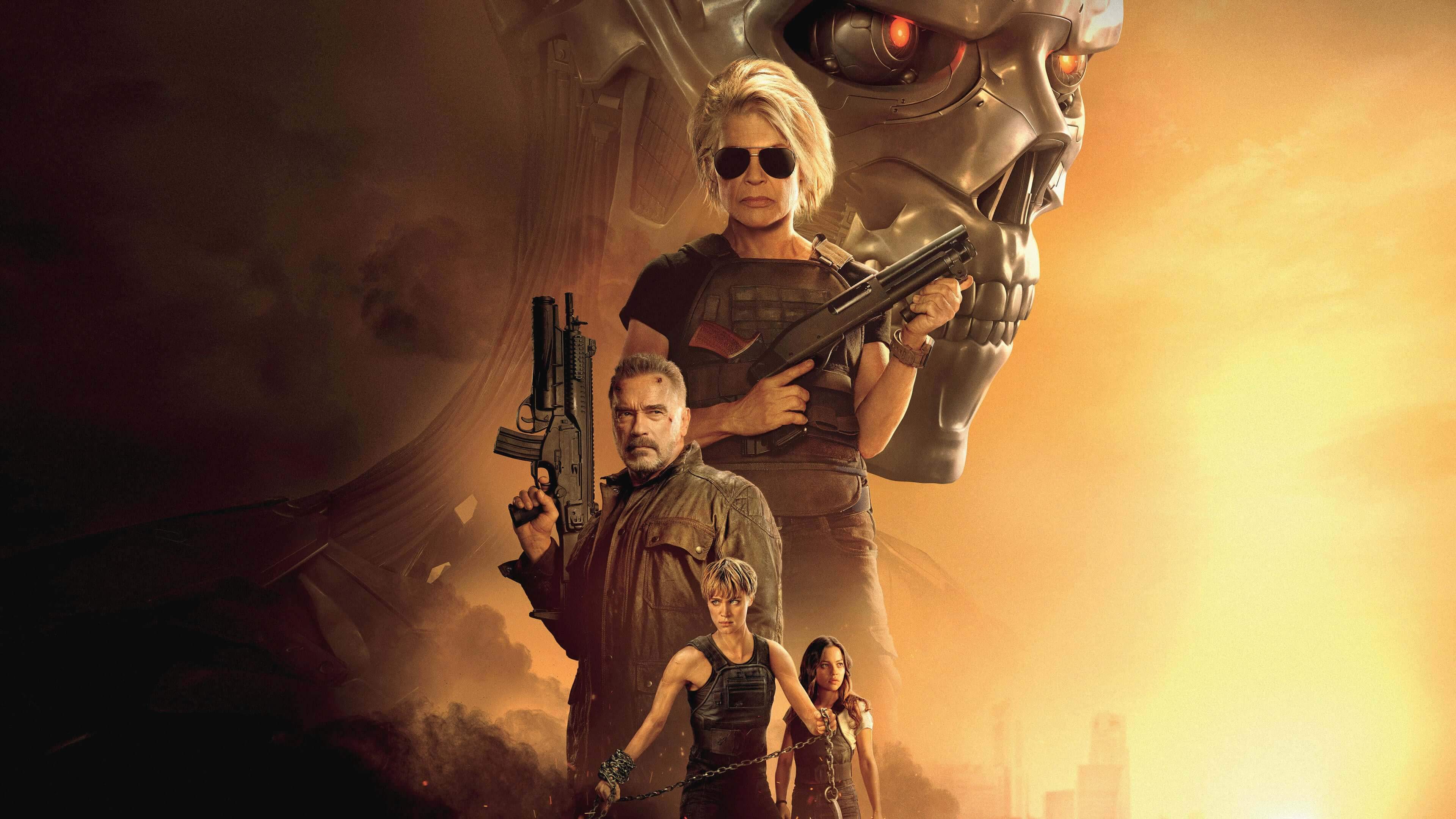 It must have been physically taxing to play the role now.
Linda: It was difficult to put the effort needed for the character, every day, for six months. We actually shot for about 190 days. The things we remember are the tough ones — such as this time where we had to shoot an underwater scene. We were in a tank with a little water level but when you are doing it for days together, it takes a toll. Natalia Reyes and I got an ear infection from shooting those sequences. And then, another sequence demanded that we be hung upside down. We did that with the ear infection and then we got nauseated because the ears didn’t equilibrate. Imagine hanging upside down in such a state (laughs). It’s amazing to think of what we all went through because it also created a group of wonderful people who love each other dearly. The experience made the bonds closer and what I will take away the most is the eternal love for my fellow actors and director Tim Miller.

Do you remember the first impression you had of each other, the first time you stepped into this franchise in 1984?
Linda: No (laughs). I don’t remember our first meeting. Jim took us for lunch I guess.
Arnold: That was for the second movie.
Linda: Oh, yeah. The first time, I went to the sets well before my shooting began. Arnold was already shooting his scenes and I was checking him out to see how he pulls off the role of the Terminator. I remember going ‘hmmm’ (laughs) because he was so good at what he was doing. The way he moved and everything about him was really good. Truth be told, in the first film, there were not a lot of moments where we were together. That’s the nature of being a Terminator — you’re always that close but never close enough to be in the same frame, until the very end. We were on it for some time but we only got to work together by the time he catches us at the end of the first movie. But by then, he is just an endoskeleton and that’s not Arnold, but a bunch of guys moving mechanical parts.

There’s a scene in Terminator: Dark Fate where advanced machines take over human jobs. How do you see this reflecting our own future?
Linda: I think a mechanised world is dangerous. Just because we can do it doesn’t mean we should. Obviously, it can be helpful in some ways to have the technology to do a better job than humankind. But to me, evolution just can’t keep up. We are making things easier for ourselves and with more help we have, the weaker we are getting. That’s the basis of evolution — it’s the survival of the fittest, not of the smartest and laziest. We are going into a place that looks smart and lazy to me, but it might finish us off if we are not very careful.

I enjoyed how you got to steal Arnold’s iconic line — ‘I’ll be back’ — in this film.
Linda: The film is always sort of making a little jab at itself. We wanted to present the old thing in a new way. Arnold said it so well for all these years that it was difficult for me to say it. For 35 years, it has been in our mind in his voice alone. It was quite a challenge for me to say it, unlike Arnold. I did it over and over to make sure it doesn’t sound like him.

In the first film, the T-800 was a ruthless machine made to kill. In the second, he learned a thing or two about humanity from John. In this film, he is as human as we had seen him. Tell us about the evolution of the Terminator.
Arnold: Unlike Sarah Connor, the Terminator didn’t really go on a journey because, at the end of each film, he gets killed or dies voluntarily. In the first film, the character was very one dimensional — he was programmed to do one thing and that was to kill. In the second film, he was programmed to be a protector. That’s a different spin James came up with. I think that’s the best part of the franchise — how a character is a menacing villain as well as a hero. In Dark Fate, there is another spin. The Terminator has spent a lot of time with other humans and has now adopted human characteristics, including almost growing a conscience. Now he has the power of making decisions, which wrestles with the machine in him. Up until now, he was half-machine and half-human physically, but now it’s also happened mentally. How that happens is what we see in the film, and that makes it interesting from an acting point of view.