Bollywood superstar Salman Khan on Friday announced his next film Kabhi Eid Kabhi Diwali, which is slated for an Eid 2021 release.

Salman took to Twitter to make the announcement of the film, which will be directed by Farhad Samji. 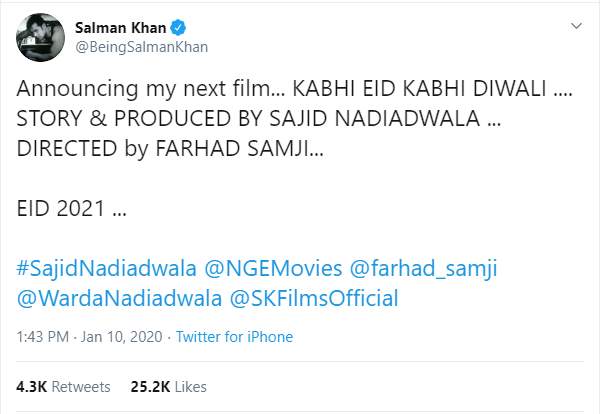 A tweet from the official account of Nadiadwala Grandson read: "@BeingSalmanKhan & Sajid Nadiadwala come together for Eid 2021 with project Titled: 'Kabhi Eid Kabhi Diwali'. To be directed by @farhad_samji."

Other details related to the film are still under wraps.

Salman was recently seen as Chulbul Pandey in Prabhudheva's Dabangg 3, the third instalment of the popular Dabangg franchise.