Making of 1917: Here’s what it took to make Sam Mendes's film immersive

Inspired by Operation Alberich, a code name for a German military operation in France during the First World War, the film 1917 follows two young British soldiers (played by George MacKay and Dean-Charles Chapman) who are ordered to deliver a message calling off a doomed offensive attack. This message is especially important to one of the soldiers because his brother will be part of the attack.

Directed, co-written, and produced by Sam Mendes, the film was shot in a manner that gives the impression of a continuous take, making it immersive and hard-hitting.

If you too were a big fan of the film or if you missed it, the film will be streaming on OTT platform SonyLIV starting Friday, July 17. But, before you begin the film, here is what it took to make this film and ensure that it offers an immersive experience:


1. The length of trenches dug at Bovingdon and Salisbury was 5,200 feet

Shot across the UK, 1917’s locations included Govan docks in Glasgow, Scotland, the River Tees in North England, a disused quarry in Oxfordshire, Bovingdon Airfield in Hertfordshire and Salisbury Plain in Wiltshire, where the Ministry of Defense owns 94,000 acres of land. In sum, during production, the length of trenches dug at Bovingdon and Salisbury were an astonishing 5,200 feet (approximately one mile).

2. Bovingdon Airfield in Hertfordshire was returned to its original state once the shooting got over

Bovingdon Airfield was chosen for its proximity to Shepperton Studios and the vast size of the site (60 acres). The height of set builds had to be taken into consideration due to a National Air Traffic Services radar station in an adjoining airfield. The art, construction and greens departments arrived in January 2019 to commence prep, and the site was returned to its original state and handed back in early September. The Bovingdon trenches were clay, and approximately 2,000 feet (610 meters) of Allied trench was built at this location across both fields.

3. The creation of Allied trenches

To design the frontline trenches, the art department undertook a great deal of research and discovered many Allied trenches with different construction techniques. The frontline trenches created were almost all similar in width to the ones in which the soldiers would have been fighting during World War I.
Primary considerations were safety and drainage. As the trenches had 15-degree angles, shoring was required. The earth walls were retained with posts and boards to prevent collapse. In addition, a combination of materials was used to cover the framework and finish the look. These included textured, painted timber, plaster-sheeted earth, corrugated iron and sandbags. Wire mesh- and wattle-fencing were aged, and the paint team had a separate crew who would travel down the trenches—with axes chains and hammers—to establish the requisite four-year-old look. 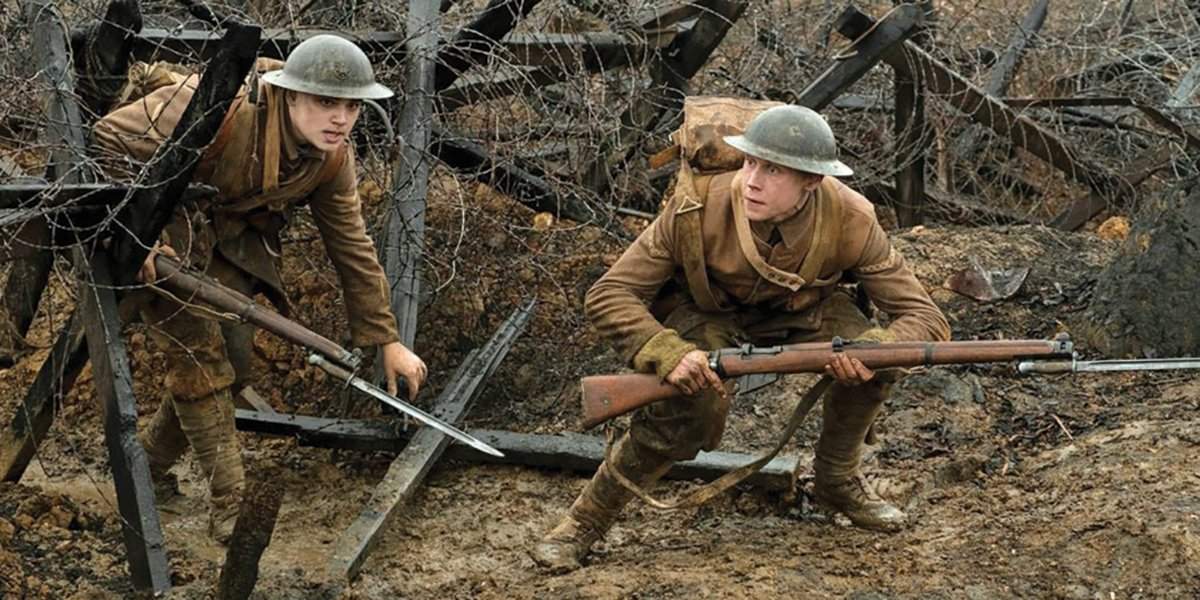 No Man’s Land’s set was split into two sections. There was the main section from the “up and over” to the far side of the large shell crater. There was also a repeat of a small section of the back rim of the large crater to the German frontline trenches. It became a vast, bleak landscape with deep mud and craters, barbed wire and the dead bodies of soldiers and horses. Due to its open nature, the entire 360-degrees of the set had to be scanned by the VFX team for additional use.

5. The German trenches were different from the Allied trenches, especially in size

During World War I, German trenches were dug deeper and wider. In addition, different materials—such as concrete and constructed-timber shuttering—were used to reinforce. The Germans also created vast trench systems and dugouts much deeper and more extensive than the Allied ones. This meant they were better able to protect and support their troops during key periods of being dug in. The length of the German trenches here was approximately 330 feet (100 meters). 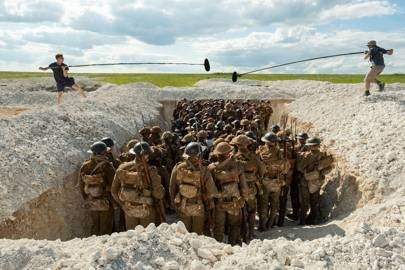 Salisbury Plain was chosen because of its wide-open landscape, one that could pass for France. Most open landscapes in the UK are either open-moorland or dominated by hedge lines, stone-walling, villages and transmission towers, but not Salisbury Plain.

Planning permission was required for the set builds and—due to the sensitive nature of the area—ecology, archaeology and geophysical surveys were required. Daily during prep, shoot and strike, locations had to liaise closely with the military as well, due to it being near a live-training site.

The construction department commenced excavation at Area 2 at Salisbury in late February 2019, with the work ongoing up until filming took place. This trench was chalk, as opposed to the Bovingdon clay one. Still, the Area 2 trench was constructed in the same manner as Bovingdon’s, using the same materials.

The French farmhouse, barn and the other outbuildings were built in workshops at Shepperton Studios and then transported. Plaster sheeting and spreading, ageing of timbers and painting finishes were all carried out on site. Once the set was complete, it looked like the farmhouse, barn, outbuildings and orchard had been there forever. 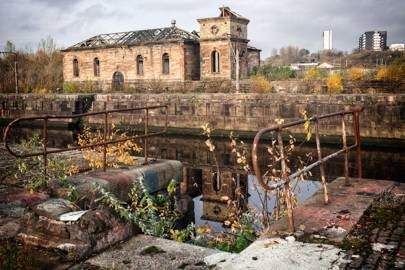 Area 14 was chosen as a location due to its landscape and topography. The combination of the copse that leads out onto a rising hillside was just what Mendes required for the scenes where Schofield reaches the 2nd Battalion frontline trenches. The quantity of chalk and top soil excavated from the site to create the trenches measured approximately 1,615 tons. The length of the trenches dug at Area 14 was approximately 2,500 feet (762 meters). For each trench-run take, the SFX pits exploded approximately 35 tons of material into the air.

For the canal-side scene in which Schofield and a German sniper battle it out, locations found a former boatyard in Scotland that worked perfectly. With a set build and dressing it was made to look like an industrial canal with a destroyed bridge. The VFX team extended the set to make it look like a complete canal.

Govan Graving Docks is a historic, listed site and planning permission was required for filming, including conversations with structural engineers. The locations and greens departments spent the first three weeks on site, from mid-April, clearing the extensively overgrown land. The exterior of the existing listed lockhouse was covered with a set built for exterior filming, and this was matched to the lockhouse that was crafted on the backlot at Shepperton Studios for interior scenes.

Low Force is an approximately 18-foot (5.5-meter) set of falls on the River Tees in Upper Teesdale, County Durham. The water levels needed to be constantly monitored, as MacKay and his stunt double were in the water at the falls, then swept along by the rapids. A large fallen tree was lowered in sections down to the river bank. It was then assembled and placed in the water for Schofield to clamber across. Alongside it, dead bodies the prosthetics department made were carefully set in the water.

To shoot the motion sequences of Schofield in the river rapids, the team headed to Tees Barrage—part of Tees Active—a 300-meter whitewater-course outdoor-activity center on the River Tees in North East England in County Durham. Testing took place across various dates in the run-up to shoot—with the stunt, marine and camera departments, including trials with Mendes and MacKay.

The production took over the backlot at Shepperton Studios in Middlesex to build the sprawling Écoust set, as well as for some VFX-element shoots. Extraordinarily impressive, the Écoust set was a destroyed French town where Schofield runs through in the dark from German gunfire. Representing a fully functioning town that had been systematically shelled, the huge set included crumbling buildings and shops, destroyed streets, a schoolhouse and a burning church.