Khasakinte Ithihasam has become synonymous with change and freshness in Malayali’s  perception of literature and theatre. While the literary masterpiece took Kerala by storm in the ’60s—with its discussions on topics like sexuality—director Deepan Shivaraman’s dramatic reinterpretation of the text, reinvents the idea of theatre for a modern audience. Moving away from the traditional dialogue-oriented method of unveiling the plot, this playwright uses further possibilities of a theatrical language to narrate the life of protagonist Ravi and the fictional village called Khasak. “Ritualistic arts like Theyyam and Padayani are our references to conceive theatre as a spatial form, rather than a verbal one,” says Deepan. Prior to the play’s Kochi debut at Sacred Heart College, he reveals how the various aspects of the performance which will entice all art aficionados. 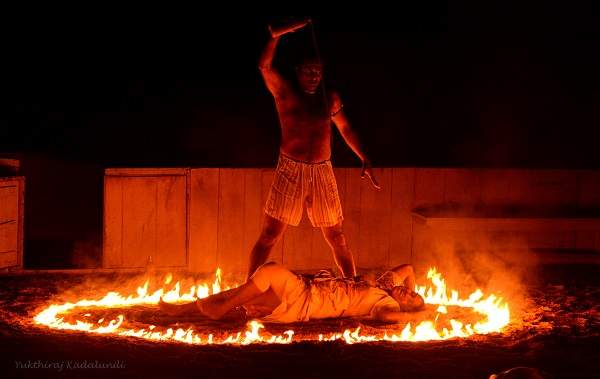 Deepan’s production—which was unveiled in Thrikkarippur two-years-ago—takes the audience beyond a conventional understanding of a performance space. The setting resembles a Theyyakkavu (an arena where Theyyam is enacted) with spectators watching from three sides. When asked about the lack of traditional scenic elements in the space to establish the rustic atmosphere, the director explains, “The space acts as a metaphor to excavate the forgotten culture of the village.”
He also calls to his aid scenographic devices like the use of puppets and loose earth to unravel the complex story. While cinematic techniques like videos help in presenting simultaneous action, the heat of fire and scents also makes Khasak a living experience. “Khasak is about the earth and the senses. Our deepest memories are not just shaped by vision and hearing, but by taste, smell and touch too,” states Deepan, who’s currently an academician at Delhi’s Ambedkar University. The background score by veteran composer Chandran Veyyattummal perfectly fits the bill with live recordings from Thasrak, the village after which Vijayan modelled his magical universe.

Stark reminders
The 43-year-old theatre figure reveals that childhood memories of his own village inspired him to recreate the Legends of Khasak ‘on stage’. “I have a strong bond with the subaltern way of life and Khasak is a whole universe that revolves around the rustic life,” shares the director, who chose amateur village-based actors to preserve the authenticity of action. The play gives deep insights into Khasak’s folk Islamic lifestyle through minuscule details like their colour sense, art and food, helping break the stereotypes on the religion.