Girish Karnad's play on Tipu Sultan to be staged in Hindustani

It’s hard to describe someone who is marred by controversies. Would it be just to call him by the titles that his admirers have bestowed on him? Or would it be fair to call him by names his haters have entitled him with? Tipu Sultan, the ruler of Mysore, is one such character from the pages of history who never ceases to disconcert anyone who has ever read his story.
Few writers have explored and presented Tipu’s story objectively. Girish Karnad, the celebrated playwright is one such artiste who gave the world of theatre the Dreams of Tipu Sultan, one of his finest plays. The 1997 play, which was written to commemorate the 50th Independence Day of India, has been performed in various languages. Next weekend, it will be staged for the first time in Hindustani. Titled Tipu Sultan Ke Khwaab, the play is translated and directed by veteran theatre artiste Zafar Mohiuddin. Despite the fact that the play has been staged earlier in other languages, the director explains why he was keen to produce this play in Hindustani. “Only after reading Girish’s play, I discovered that Tipu had left his kids as hostages with the British. This point really touched me. Thereafter, I translated the play in Urdu and this year, I was keen to stage it so that more people get to know of the ruler’s life, ” says Zafar. 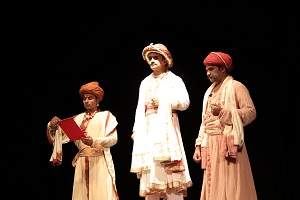 The play delves into Tipu’s life during the last leg of his reign. It depicts the ruler’s dreams seen through the narrative of a historian. The story also reveals the other side of Tipu, also called the  Tiger of Mysore. He was also a husband and a father, a vulner-able man. But what makes Zafar’s rendition special is the use of Deccani, a dialect of Urdu spoken in Devanahalli, where Tipu was born.
Talking about his protagonist, Tipu, playwright Girish Karnad says, “Tipu’s story is always relevant because he was a great freedom fighter, and was probably the greatest Kannadiga, after the Vijayanagar kingdom collapsed. Everything you talk of Karna-taka today, he had forseen. He united Karnataka and did many things that were way ahead of his time and acknowledged by his contemporaries. He was a born Kannadiga, he spoke Kannada and was virtually the only independent king in Karnataka after the British came to India.”
Though the play was penned 20 years ago, it continues to interest people because of the exceptional character that Tipu was.