On the road to absolution with Barabbas, in a monodrama by The Auroville Theatre Group

After their stirring portrayal of the life of yesteryear American actor-director Orson Welles, The Auroville Theatre Group (TATG) is teaming up with American playwright and author Richard France for their upcoming two-act monodrama, Barabbas. Barabbas is a figure in the Bible’s New Testament, a prisoner who was freed by the then Roman governor, Pontius Pilate, just before Jesus’ crucifixion.

However, the inspiration for enacting this story in a play has got no Biblical roots. In fact, it was a personal tragedy faced by Richard that compelled him to channel his emotions into a script. “I wrote the play in a burst after returning from the funeral of my ex-wife. To say that I grieved deeply is an understatement. I suppose the rage, grief and disappointment that I’ve always harboured became the fuel for The Blind — my original title for Barabbas,” Richard tells us, adding that the universality of Barabbas’ quest to find something worthy of his devotion is a relatable feeling.

Don’t we all harbour that existential need? And doesn’t that quest usually end in our being disappointed?” asks Richard. He adds, “God knows that I have lived with that need for much of my life, and only finding where and with whom I belonged, at the age of 60. Clearly the shock of my wife Rachel’s untimely death brought all those years of ‘being blind’ back into focus.”

Ahead of their performance at CRIPA Auditorium in Auroville, we speak with director Jill Navarre of TATG and find out how she went about producing this play, and more about the cast. Excerpts: What’s the story of Barabbas all about?
Barabbas appears in the Bible, as a Jew from Judea at the time of Christ. He is freed from prison at the same time when Jesus is condemned to death. The play explores the life of the thief/murderer or revolutionary/patriot (depending on who is telling the story) as he tries to come to terms with his fate. The burning question which he grapples with the rest of his life is, “Why me and not Him?” And who exactly is the man who was crucified? Is he a failed defender of his country, a magician who conjured up bodies from graves and fed hundreds by magic tricks? “But if I don’t believe in Him as the Son of God, why am I pursued by doubts and guilt?” Barabbas asks. In the end, Barabbas decides that the only way to free the country from bondage is through armed struggle and hate, and not through love. But where has love ever got us, he doubts. “To be in bondage and suffer needlessly. But still...why does my heart continue to burn and my conscience brings me nothing but nightmares?”

What are the changes that you have brought into your version when compared to the original?
The play on the page is never the play on the stage. Luckily for us, Richard is such a passionate, poetic and playable playwright that his work always offers actors juicy parts, full of possibilities. And of course, the theme is relevant to us, here, today. Can love conquer injustice or is it through armed struggle, fueled by hate, that those who are oppressed will win their freedom? I hope I have stayed true to the original and brought it joyfully to life. What kind of dialogues and music can we expect?
Barabbas is practically a one man show, with the second actor, bereft of almost all words,  playing several parts — among them, the guide, an innkeeper, a Roman soldier, a rich merchant, a sailor and a prison guard. Barabbas is a storyteller, telling us the story of his life and bringing us along on his journey to Rome and Alexandria after he leaves Jerusalem. It has wonderful dialogues, richly detailed, and at times sarcastic and scornful. At other times, they are full of hate, and often, despair, confusion and doubt. It is the journey of a soul possessed by demons who will not leave him alone.

The music we have chosen tries to evoke the time, the places and the circumstances — expect everything from St Matthew’s Passion by Johann Sebastian Bach to Hebrew Psalm 104 set to music performed by the Jamma Ensemble. There’s also original music written by Aurovilian Hartmut von Lieres. Hartmut and I have collaborated on several plays with great success, including A Midsummer Night’s Dream, Once Upon a River, The Tempest, and King Lear. This time, for Barabbas, Hartmut has written three beautiful and soulful pieces that support three different moments: The Death of Judas, Barabbas argues with Jesus, and The Crowd Chooses Death.

What’s the set like?
Hardly any, if you are talking about a built one. Instead, we will be using lights to define the spaces and projections to set the time and places. Playing in CRIPA allows us to get close to our audience, but at the same time limits our ability to use any large set pieces.
So we adapt, by playing with different locations, lights, projections and the audience's imagination. As for props, there are two primary ones — a prison cell window and a cross. 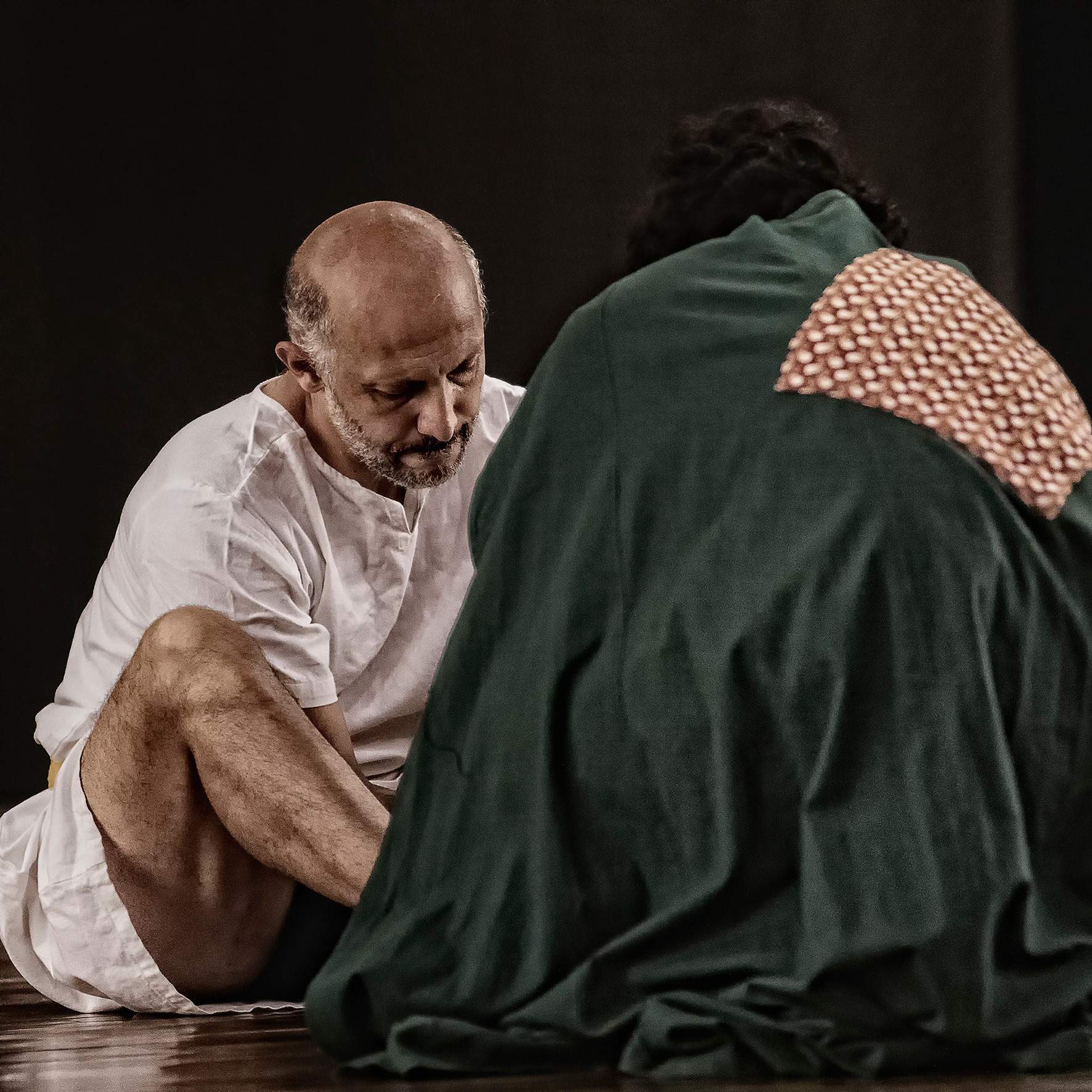