Made in lockdown: Here are a few hot new series, short films and videos made in home studios

The unprecedented times call for unprecedented initiatives. The ongoing lockdown saw some actors, directors and musicians working from the confinement of their homes and yet producing videos, short films and even full-fledged web-series. It was a first for many of them. While some had to wear the hat of a cameraperson, lightman and make-up artist while also acting at the same time, the directors had to work remotely throughout - first with the actors and later with the production team so that everything looks seamless. To understand their experience of working remoting and what it means for the content in the post-lockdown era, Indulge spoke to some of the artists:

Actor, writer and director Shreya made most of this lockdown by penning down a miniseries. Titled A Viral Wedding, it featured a couple who had planned a perfect wedding but had to change plans owing to the Coronavirus and the subsequent lockdown.

“Since I am the creator of the show, the idea that I could write something that would be created and hopefully released during the lockdown was the most exciting part for me,” says Shreya who was running a one-man show - she was the director, writer and also one of the lead actors.

“I wrote the script in a day and it was shot in a week’s time. But, since I live alone and didn’t have anyone to help me out, it was a very different experience. On a set, there are so many people giving you their skill and time, here one had to manage everything - from light, hair and makeup to camera angle and costume design. It was unique and challenging. We used technology as much as we could, people shot their take and sent it over WhatsApp, we stayed in touch through video calls... There were a lot of logistical issues but it was damn fun,” says Shreya who shot it entirely over phone and GoPro and made make-shift tripod using chair and utensils at home to get the right camera angles.

But, if given a chance, would she do it all over again? “In terms of uniqueness and challenge, yes! But, in terms of everything else, no! It is so much better when people are around,” she adds.

The Screen Patti’s Lockdown Wala Match, made in association with OkCupid, revolves around a couple who meets on a dating app and started dating virtually during this lockdown.

“Although there’s always a lot of prep involved for an actor before the shoot, this time the kind of planning that went into it was completely different. I not only played the part that I was cast for but also managed a lot of other departments on my own,” says Apoorva Arora. While managing the shoot wasn’t the difficult part for Shivankit Singh Parihar who has worked as Assitant Director on some projects in the past, the challenging part for him was technology, which they all were heavily dependent upon. “Managing the footage and uploading it with a bad internet connection was a task. The director also wanted me to sink my camera composition with my co actor's frame and angles and that part was also very challenging,” says Shivankit.

To make it easier, co-writer and co-director Parikshit Joshi ensured that the script is written keeping in mind the challenges. “We wrote what we were more than sure could be shot at home, which also gave a certain style to the video. While script reading sessions and scene briefing were a task, the biggest challenge was communicating for the post-production,” says Parikshit who along with his co-director Abhishek Kumar decided to keep simples shots and even drew rough storyboards for both the actors to make the process a bit seamless.

Keeping in mind the ongoing lockdown, influencer and digital content creator Kusha Kapila collaborated with Voot for an interactive show, Go Fun Yourself. Each episode sees her giving a new challenge to the audience, who send in their entries performing those challenges. Talking about her experience, Kusha says, “It is definitely a challenge considering one has to take care of the entire production which includes camera set-up, lighting, hair, make-up, styling, and more. But, it is a very humbling experience, considering the fact that we are used to very large teams. So, this has been a great learning curve.” Beyond this show as well, Kusha has been shooting constantly during this lockdown, including an episode of Behensplaining with Srishti Dixit.

“Creating content makes me feel alive and running. I feel this is my way to deal with the stress,” says Kusha who has been using a Canon Mark 4 and a pixel 3XL for work. When asked what’s her biggest learning from shooting excessively during the lockdown, Kusha immediately answers, “It is the realisation that content creators on the Internet aren’t going anywhere.”

Go Fun Yourself streams on Voot

Karan Wahi, who is hosting reality show Home Dancer from his home, is finding this setting very different. “I am not just the anchor, I am also shooting it myself as well as calling the shots because we have to figure out what can be done and what can’t be done since the format is very different. Usually, for a reality show, we have about an hour-long episode but here we are keeping it 20 minutes and about half is it goes to show the performances. So, what I am saying has to be really crisp. Also, when I am anchoring, a lot of it is usually a conversation with the audience or contestants but here, I don't have anybody around me,” says Karan Wahi while also adding that he is equally glad for this learning experience. However, he only wishes for actors and anchors to have access to the required equipment. “If we have to shoot from home in coming times as well, I hope we do get the necessary equipment to make our life a little easier. Shooting from your mobile phone gets a little taxing, especially when you are confined within the four walls of your home,” he states. 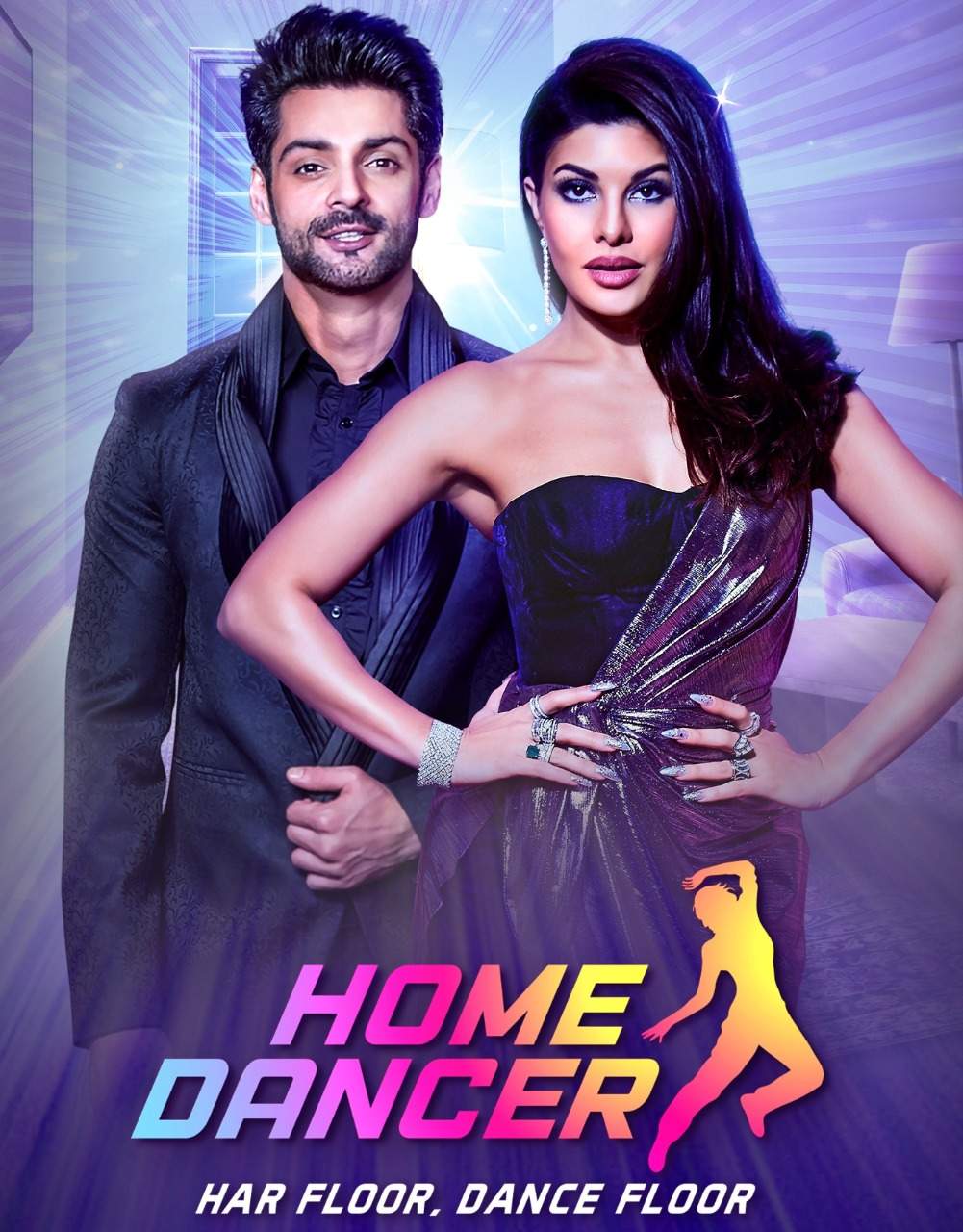 Talking about the preparation for this show, he adds, “The show is also a way to break away from the monotony and boredom while also giving people a platform. It appeared very easy to me when I signed it but it involves heavy preparations. We are on a conference call or video call making all the decisions. The first episode took quite a few days. But, I feel it is keeping me on my toes and it is exciting because I haven’t seen this side of a reality show.”

Sejal Kumar - Half Of My Heart

For YouTuber Sejal Kumar, who has been churning out content for her YouTube channel and social media accounts, managing production while also acting in Terrible Tiny Talkies' latest short film Half Of My Heart wasn’t a challenge. The challenging part was doing it without the right equipment.

“I had come to Delhi carrying clothes for just two days when the lockdown was announced so I didn’t have a phone tripod. To level the height, I had stacked six books, one on the top of another, and put my phone on it. It was full jugaadu,” recalls Sejal, who shot the short film from different angles, giving a feel of being shot by professionals.

“All the shots were set by me and it was quite challenging. Although the quality of production is not as fine as it would have been had it been shot by a professional camera but we did incorporate a variety of camera angles. Fun fact, Arjun and I didn’t shoot a single scene together. We did it on cue from the production team and it still looks very natural,” she says and gives credit to the production team and the writer. “The chemistry was still there and it made me realise the importance of good writing. It was about telling a story through emotions. We didn’t even need each other. It was also very well edited,” she adds.

“During the initial discussions, our biggest challenge was that our actors are residing in different geographical locations so to make it look seamless we had to use the space and equipment that was available with the actors,” informs the writer and co-director Ajayan Venugopalan. “Writing scenes in a way that the actors' interaction with each other is bare minimum was very challenging since it is a comedy series and the first season was known for the banter between the actors,” he adds.

The series was shot by the actors themselves. “The first episode was almost like a hands-on learning experience for us. All our actors like Ranvir, Purbi, Omie, and Pitobash have a lot of experience in the industry so they knew what was expected out of them. We provided them with a detailed shot-list with the camera angles and coverage needed for individual scenes. We also gave them rough edits of initial episodes and by the third episode, the shooting had become a lot easier,” he says while adding that at least for another year, shows and movies will be shot with a minimal crew. “This will be a new normal until a proper vaccination is in place. But, the best "out of the box" creative ideas come when you are restricted in a box,” he quips. Mumbai-based singer-songwriter Nikhil D'Souza recently came out with a twin-track, People. The song whose essence lies in co-existing, acceptance and peace was initially written by Nikhil in English but with a desire to share with as many people as possible, the song was translated in Hindi as well, making it first of a kind in the indie music space. While all of this could be done remotely, how would one shoot the video for the song during a nationwide lockdown? The vision he has in mind had to be changed but Nikhil has no qualms. If anything, he finds the new version, which features a beautiful relationship between an old woman and two young children, much better.

“It was filmed during the lockdown and had it not been for these restrictions, we perhaps would have done things differently. But what we ended up capturing, in the end, is decidedly more powerful. It's the innocence that the track refers to, beautifully manifested through the innocent relationship between a grandmother and two young kids,” tells Nikhil.


The video was shot by Director and Director of Photography Ruhi More featuring people from her building. “Our creative director Suraj Wanvari along with DOP Ruhi More took all the immense challenges into consideration while scripting and planning the shots they needed. There wasn't a crew of sorts since we had to keep lockdown guidelines in mind. This production team has worked like magicians on this video,” add Nikhil who has an EP lined up, which will be released in two months’ time.

ALSO READ: ‘It was challenging and that’s what made it interesting’: Kriti Vij and Pranay Manchanda on shooting Season 2 of Firsts from their home