Couturier Naina Jain has an extraordinary flair for creating something out of the ordinary. The city-based designer has transformed the language of fashion when it comes to the age-old bandhani and has played around the art as no other could. Creating unusual patterns with the tie-and-dye technique, she melds the same with other traditional art forms including Lucknawi chikankari, Benarasi weaves and Gujarati patola. These unique syntheses lend a new character to each of her pieces which reflects the rich Indian craftsmanship in a contemporary style. 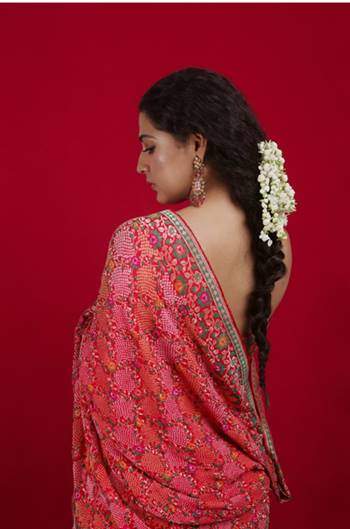 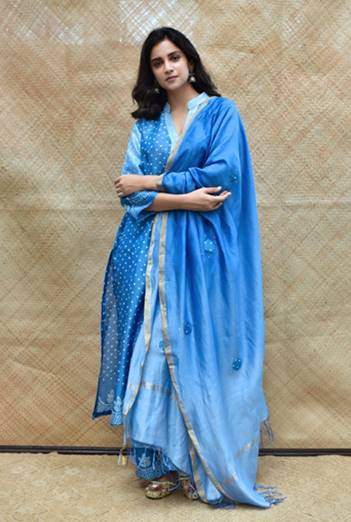 The designer who started the label back in 1997 under the name Bandhej and later made it eponymous, goes beyond just mixing different regional craftsmanship. She has given bandhani a new canvas, making it more opulent, not to mention the ones in handwoven organza, which have a soft and flowing demeanour. The label also has a range of light-weight, chic salwar kurtas and lehengas in silk, that make for a perfect choice for small gatherings and special events. In terms of colour, Jain prefers bright hues of red, fuchsia pink, green and yellow among others, that exude a distinct aura. In her festive collection, Pratidhwani, Jain has used mirror work and tie-and-dye techniques.

Elaborating on it, Jain’s daughter Shrutika Jain who helps her out with the marketing and communications of the label, tells us, “This is the first time we are using three elements together in a collection. Apart from bandhani, which is our USP, we have played with mirror work and tie-and-dye method. Since both have a reflective effect, we have toned it down in terms of the size of the plastic mirrors and embroidered edges. Also, the work runs around the sleeves or hems, making it non-flashy”.

Her tie-and-dye technique is so fine that it can be mistaken for a print. Also, the patterns, which are interesting geometric forms, are markedly different from the regular tie-and dye options. Going forward, Shrutika intends to introduce experiential shopping in all the existing and upcoming stores. Apart from their flagship store in Salt Lake, they have two more in Delhi and Mumbai, that are waiting to be reopened after the pandemic. Also, plans are on to capture the US market with a more aggressive online presence.