A Shriya Som collection is always about glamour, style and ultra-elegance. Her Lakmé Fashion Week Summer/Resort 2019 line called “Reverie” took inspiration from the islands where the original raffia palm tree swayed in the breeze.  Keeping the inspiration in mind, Shriya remembered the foliage, florals, vines, sun, sea and sand that created an atmosphere of utter freedom. The carefree spirited element of the clothes brought to centre stage the spring/summer attitude, which buyers will undoubtedly approve.

Aimed at the woman who, like the wind moves gracefully through life, the rouching, ruffles and raffia were the focal point of the layered silhouettes that will please the wearer. Gentle hues of peach created a fashion melody with rose quartz and orchid that were perfectly blended with soft blues. The slightly androgynous nature of the ensembles was emphasised with angular motifs and pre-pleated textures. Raffia in florals, fringes at times appeared as embroidered, braided, twisted, knotted and dyed forms and took on myriad looks. 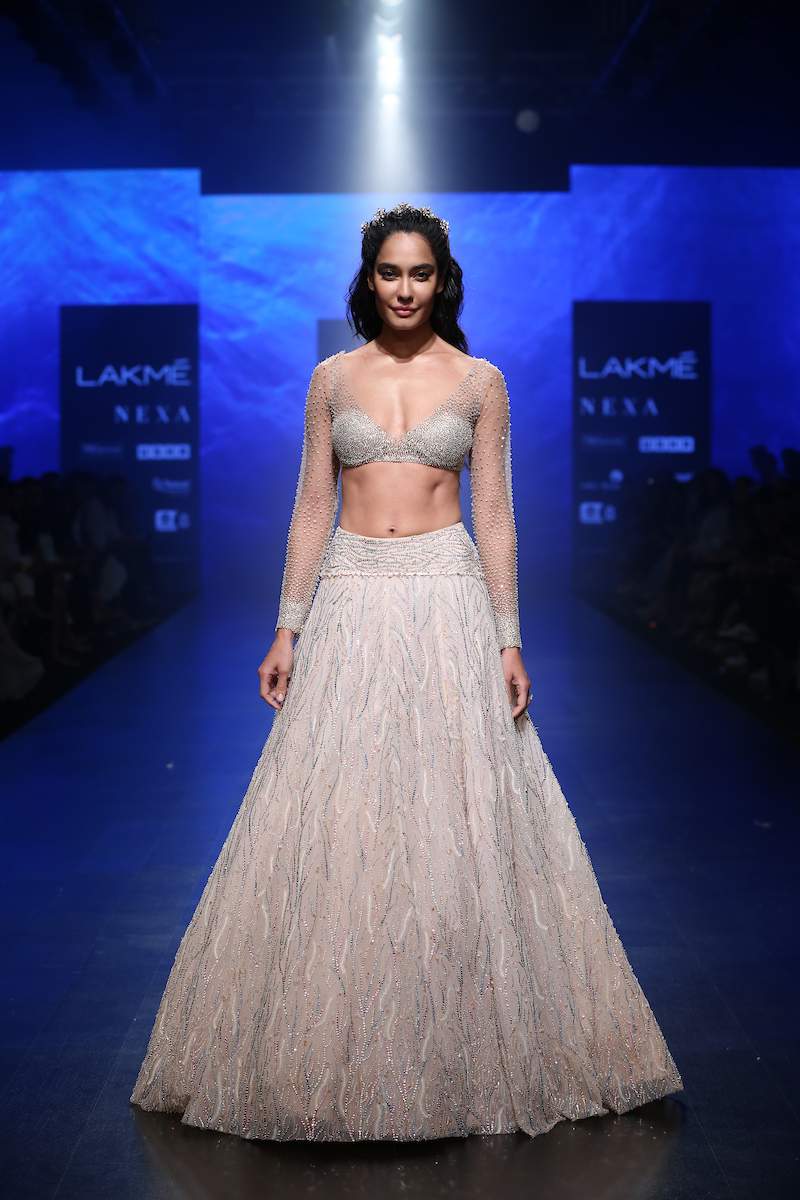 The pastel shift dress with checked detailing all over, ended in the 1920’s tasselled hemline; while the diaphanous white, layered, soft cape with magnificent 3D appliqués was worn with flowing palazzos.

In pastel shades, the collection opened with three intricately frilled minis and then moved onto a corset with frills and sleek pants. The 3D embellished, floral mini, multi appliquéd panelled bolero with tasselled skirt, a jacket over a tulle corset dress and a sheer asymmetric poncho with body suit, created the look that will be ideal for those glamorous resort holidays. Pleating appeared for midis; while the 3-piece suit in shimmering fabric looked ideal for destination holiday soirées. The fluid, flapping folds, moulded together were a constant in most ensembles as they appeared for boleros, jackets and outfits.

Making a dramatic show stopping entry was glamorous Lisa Haydon who looked like a dazzling Diva in a glittering, long- sleeved, tiny choli and magnificent lehenga.

Shriya Som’s “Reverie” collection is where the fashion followers will want to lose themselves when they decide to select a fluid, feminine line for the coming season.

Shehla Khan’s label ‘Shehlaa’ has always been one that has unveiled glamour and sophistication on the catwalk. The sensuous, scintillating ensembles with intricate embellishments and clever construction, have attracted the attention of fashionistas.

For Lakmé Fashion Week Summer/Resort 2019, it was the look of the power-packed 1980’s and an ode to the late Princess Diana that inspired Shehla’s “Diana” collection. 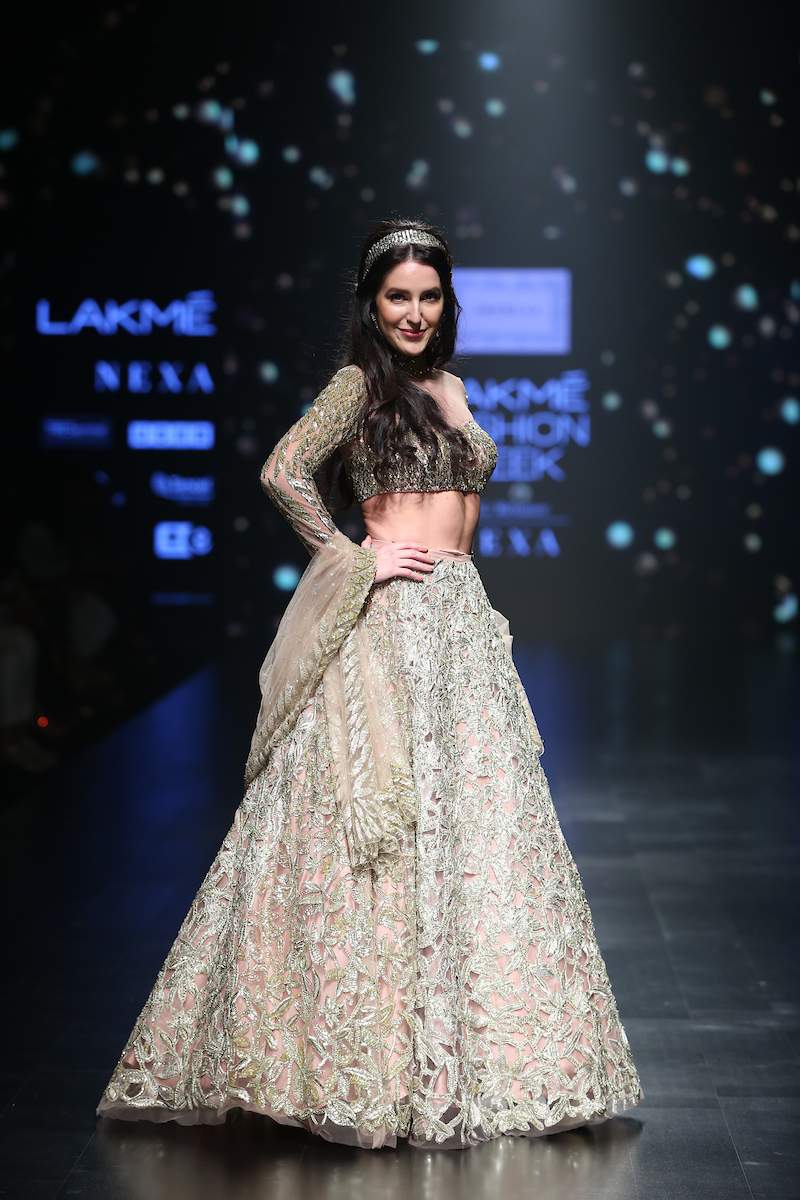 Revering Diana’s style sensibilities, the designer remembered the line of pastels with pearls, which were the focal point of that era, along with feminine blouses with cute bows that ended with elegant regal gowns.

Giving a luxurious stamp to the collection, Shehla visualised her embroidery with the most exquisite pearls, crystals and then added hints of gold, as well as pastel tones that at times, featured fuchsia and black. The silhouettes remained sultry, but with a royal Indian appeal.

Shehla opened the show with pretty Isabelle Kaif who looked  glamorous in a glittering, rich, olive and silver Lehenga/choli with a net dupatta. Soon, it was the look for a Red Carpet journey when a red lehenga worn with a gold bralet and bolero, a rose-pink halter with red shimmering pant and a white satin jumpsuit with pearl detailing, came on the runway.

Using pearls lavishly, nearly every ensemble was splashed with them, so the kaftan, lehengas with draped tops, gowns, cowled sleeves of the cholis, jackets both long and short, as well as tie-up cholis were minutely encrusted with the products of the oysters. 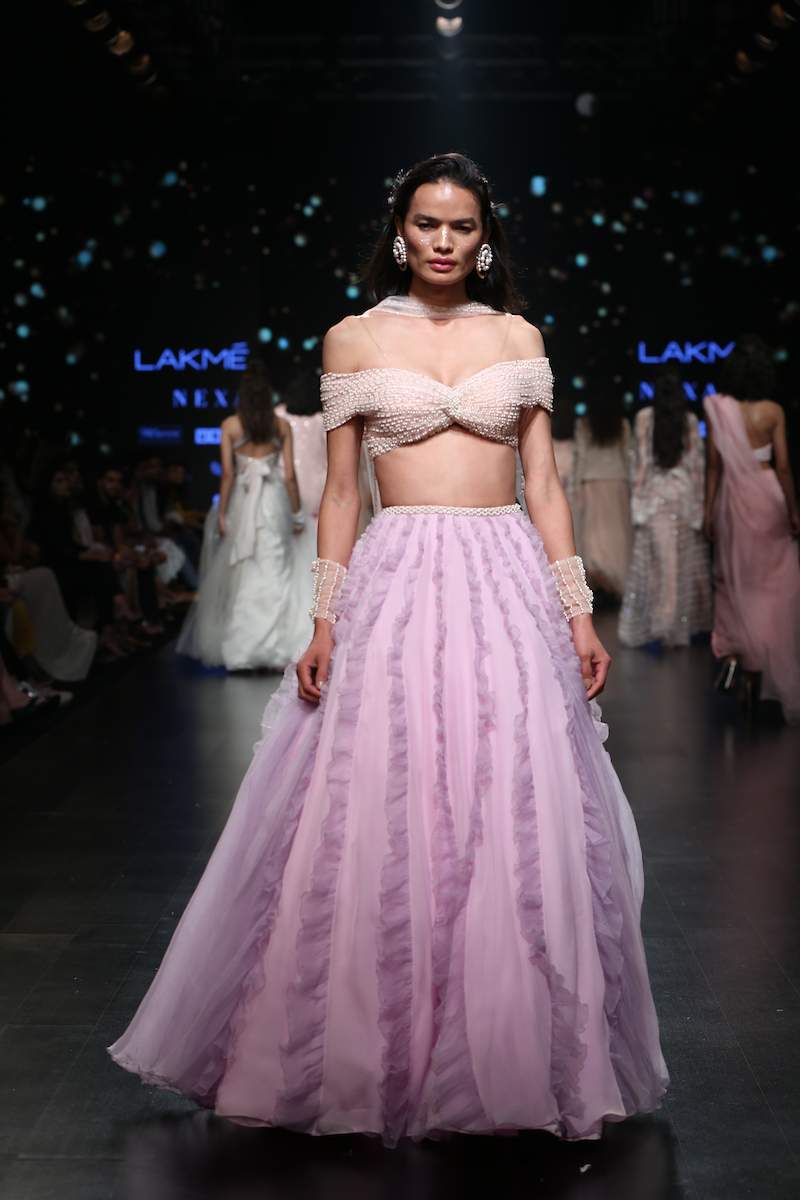 The powerhouse shoulder pads gave a retro feel to the clothes of that decade; while the opulent embroidery and the luxe fashion with sheers at the centre, took the ensembles up the formal wear ladder.

From pretty pastels, the colour card moved to black with embroidery or ombré touches for lehengas, cholis and dupattas.

Ensuring that the final showstopper was completely different, Shehla invited the very multi-talented Karan Johar to end the women’s fashion show, when he appeared in a sparkling crystal encrusted jacket.

For the woman who wants to make a royal, fashionable, statement, the “Diana” collection by Shehla Khan for her label ‘Shehlaa’ will be the elegant option.