At their latest outing at Whispering Stones, Amethyst curates the best of ethnic fashion by bringing together two of the country’s most recognised labels, Raw Mango by Sanjay Garg and Amarapali, under one roof. Synonymous with creating masterfully handcrafted pieces, expect to find an array of saris and other Indi-an silhouettes from Raw Mango’s Raas and Baag collections, and an exclusive range of Amrapali jewellery designed for Baahubali 2 at a two-day pop-up starting tomorrow.

Tales on a weave When Sanjay Garg debuted his eponymous label at Lakme Fashion Week in 2014, the then 38-year-old designer broke away from the heavy-sequined trend that governed bridal couture and threw the spotlight on the craftsmanship of Indian textiles. Three years later, the New Delhi-based designer returns to familiar territory, with his collection, Baag, drawing heavily on the colours and prints of his home state of Rajasthan, while Raas reinvents the classic silk cotton chanderi by introducing metallic warp into the fabric. “Handloom saris, though worn every day by large numbers of women all over India, are relegated to an area perceived to have little scope for new experimentation,” rues the designer. Known for his innovative silhouettes, look out for a range of jackets, lehengas and kurtas in shades of gulabi (rose pink) and lime green with delicate necklines and pleating at the wrists and ankles under Baag. The Raas collection has saris in a palette of blush pinks, angoori (grape purple) and  lemon yellow. “The saris come paired with blouses featuring elastic waists and delicate gul badan embroidery.” Rs 7,000 onwards. Details: rawmango.in 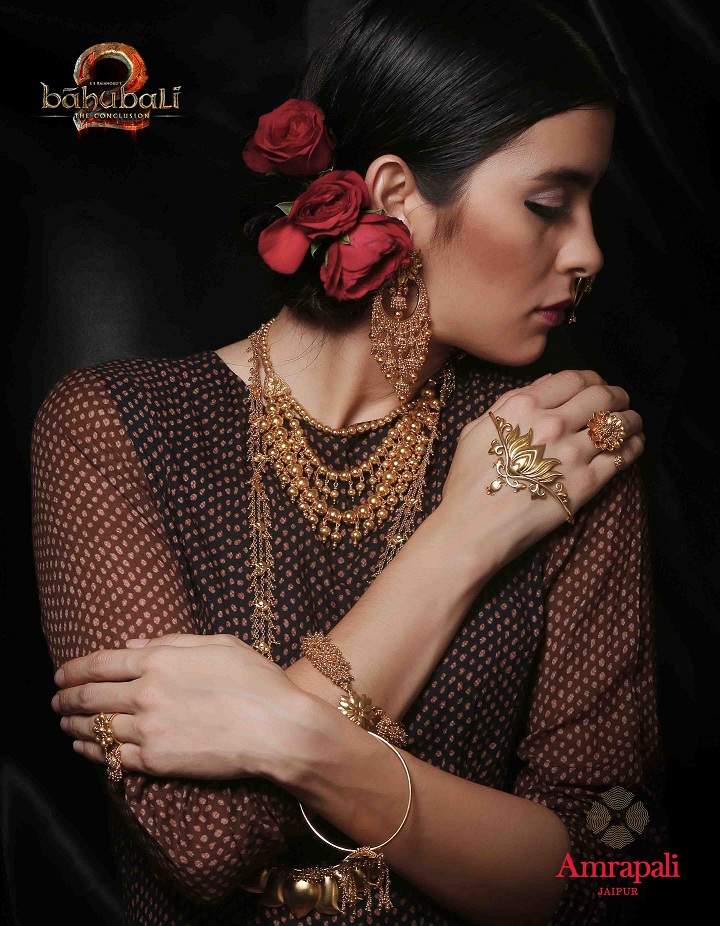 Officially commissioned to design the jewellery of the second installment of SS Rajamouli’s magnum opus, the Baahubali-inspired collection by Amrapali was created by two design teams of 100 artisans each. Comprising jewellery including bangles, bracelets, cuffs, anklets, rings, nose pins, ear cuffs, earrings, mang tikas, necklaces, chokers, baju bandh (armlet) and waist belts, “the 1,500 piece collection took over 8,500 hours to complete,” shares creative head, Anil Ajmera. With production spread across their units in Jaipur and Hyderabad, the label designed four collections-Raga which is a multi-coloured floral line and Mauktika that features pearl studded ornaments, both created for Devsena’s character; Suvarna, a delicate gold plated silver line with floral accents and Vikrama worn by the characters of Mahendra Baahubali and Sivagami that include solid silver accessories.While the collection may not include the main necklace worn by the actor Prabhas which weighed over a kilo, co-founder Rajiv Arora tells us that the line on display includes pieces that featured on screen. Rs 1,600. Available at Amrapali stores.