The Lakme Fashion Week Winter / Festive this year saw a lot of highlights, from Good Earth’s Sustain debuting on the LFW runway to Cirque Du Soleil closing the event as part of Monisha Jaising’s grand finale. However, as always, the focus was on craftsmanship, innovation and fashion. While Chola opened up a dialogue on gender neutral dressing with its collection, Bye Felicia, Gaurang Shah stuck to his roots with a line that was a tribute to late actress Savitri. Then, there was Ritu Kumar who drew inspiration from Native American and Inca culture. To say that there was something for everyone, would be an understatement. We round up some of the hottest trends... 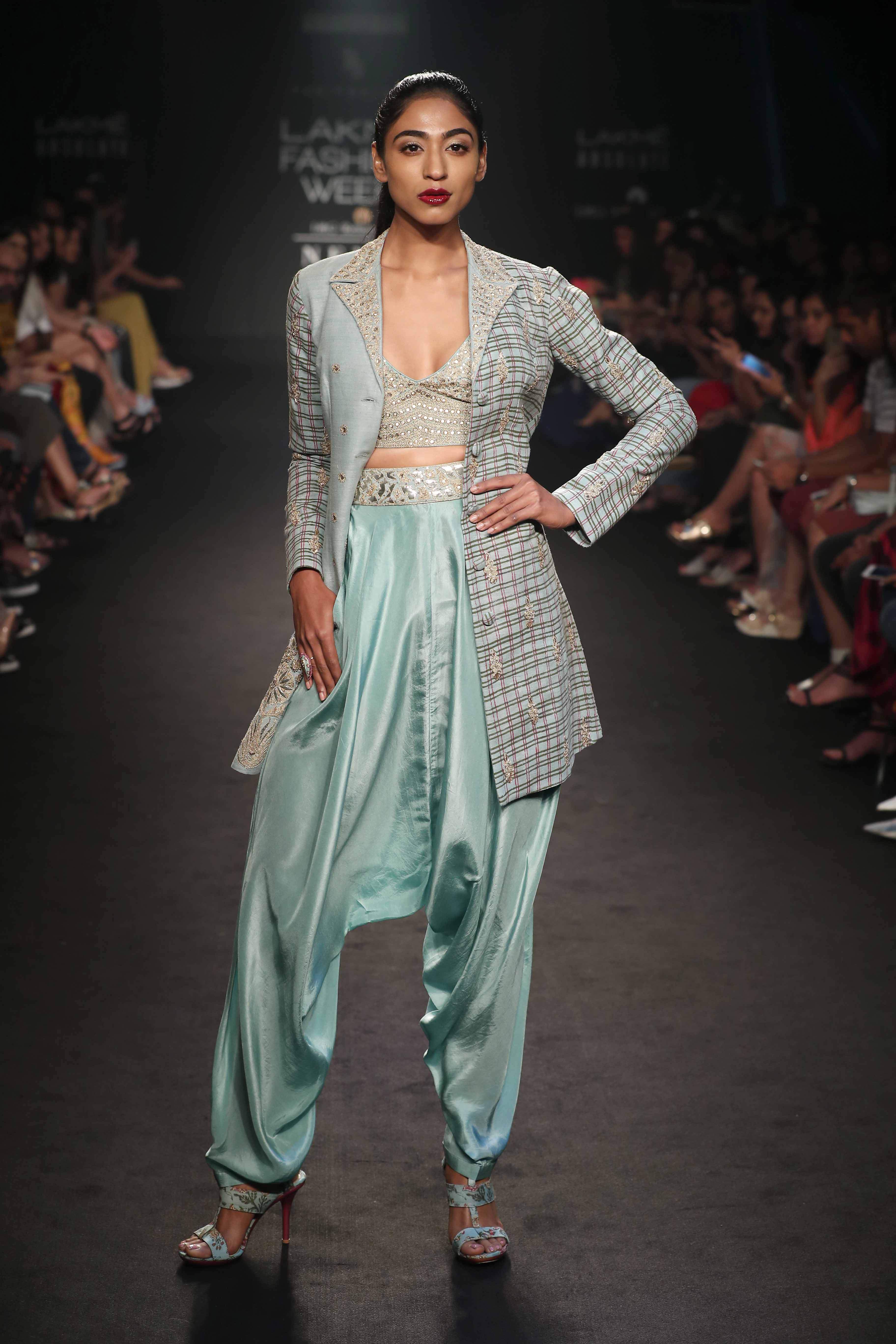 Make a beeline
The grandeur of Amer Fort might have been one of the inspirations for Jaipur-based designer Punit Balana’s Gulabi Chowk collection, but it was the Sanganeri block-printing with a modern twist that stood out. One of his long jackets, a mint green number with checked prints in deep green and red, is juxtaposed with golden dori work that is the perfect balance between traditional and edgy. Also ‘getting in line’ with the trend was Urvashi Kaur with a striped and tiered maxi-dress-and-kedia-jacket ensemble in crimson and maroon. 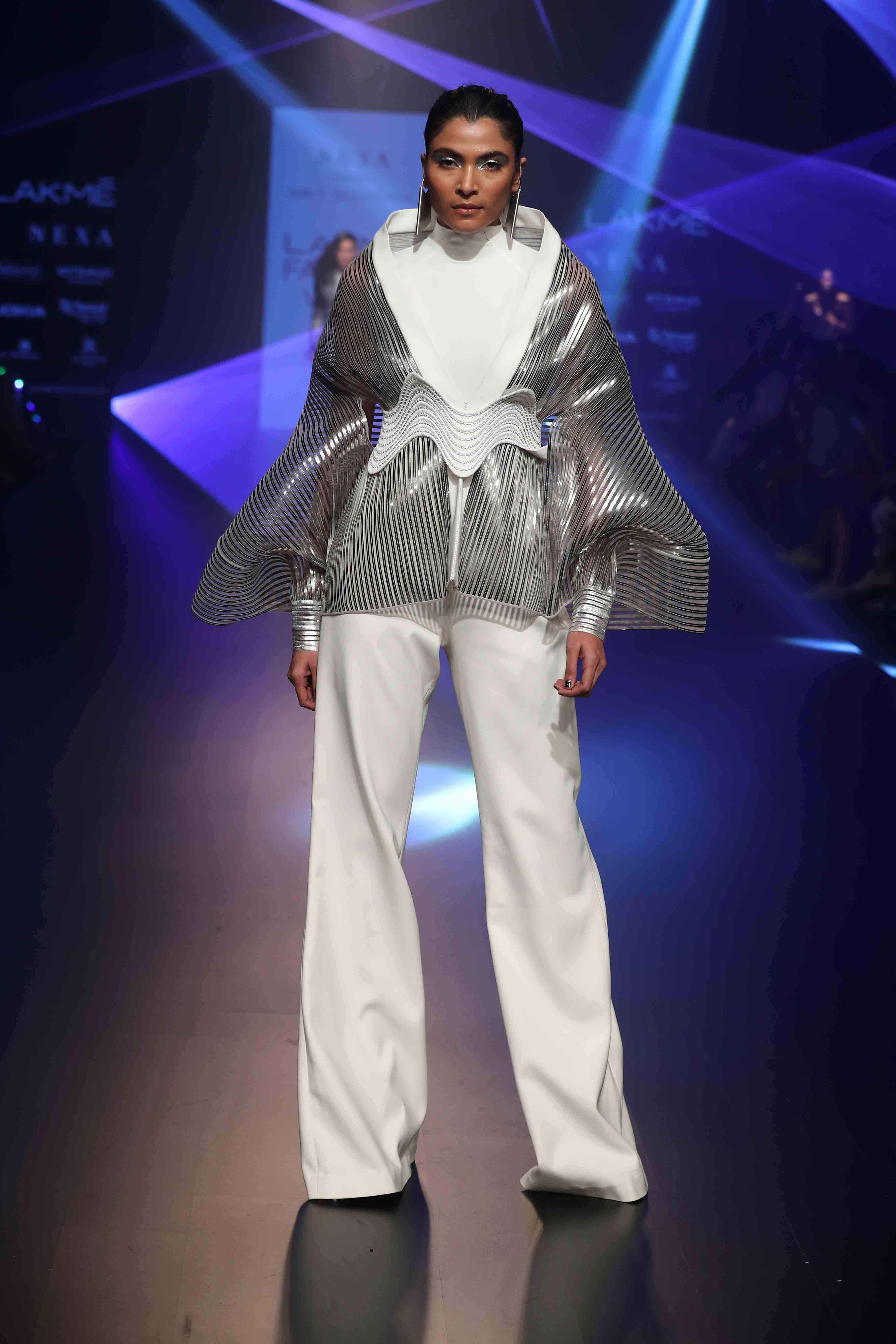 Go big
Both Saaksha & Kinni and Ashish Soni made a strong case for oversized clothing this season. While the former, through their collection Raas, interpreted the trend through kimono-style jackets, and tunics, Ashish also turned to the long jacket. One of his statement pieces was a plain black number with voluminous flared sleeves and a matching belt. 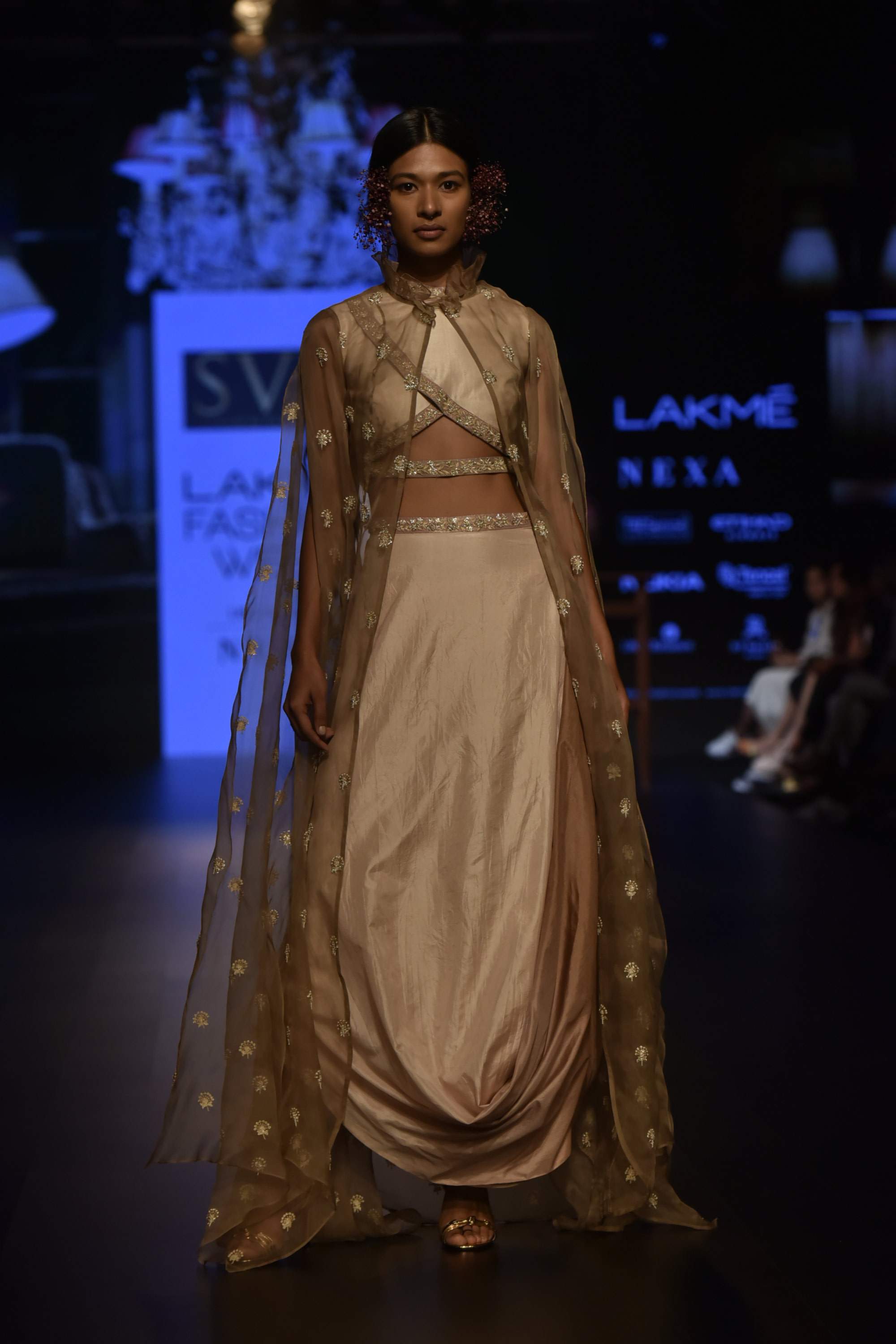 Cape town
The cape makes a return for festive wear with Sva by Sonam & Paras Modi creating strong looks with the silhouette. Our favourite was a sheer, russet floor-length piece with a ruffled collar and metallic embellishments, worn over an ivory lehenga-choli with matching russet borders. 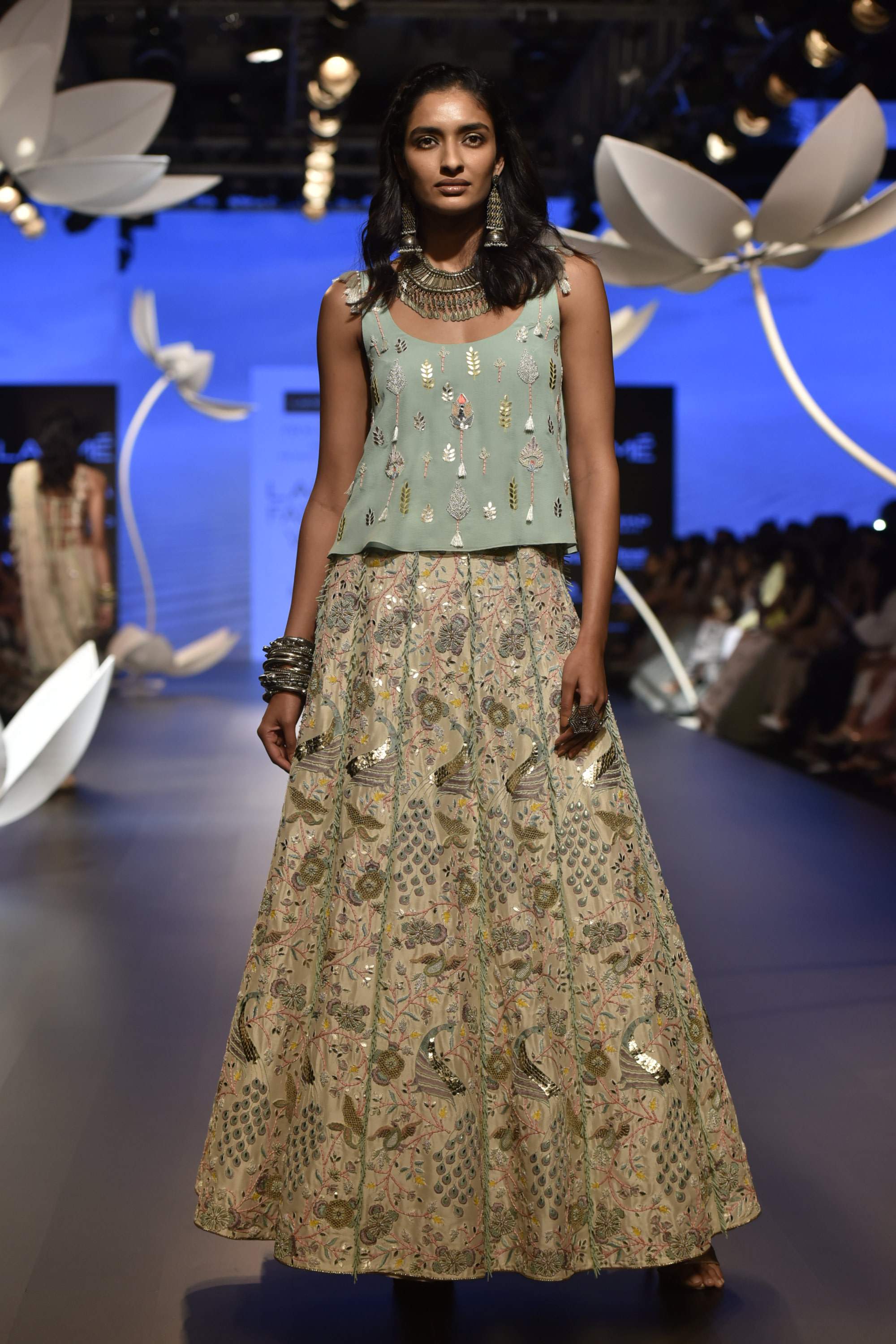 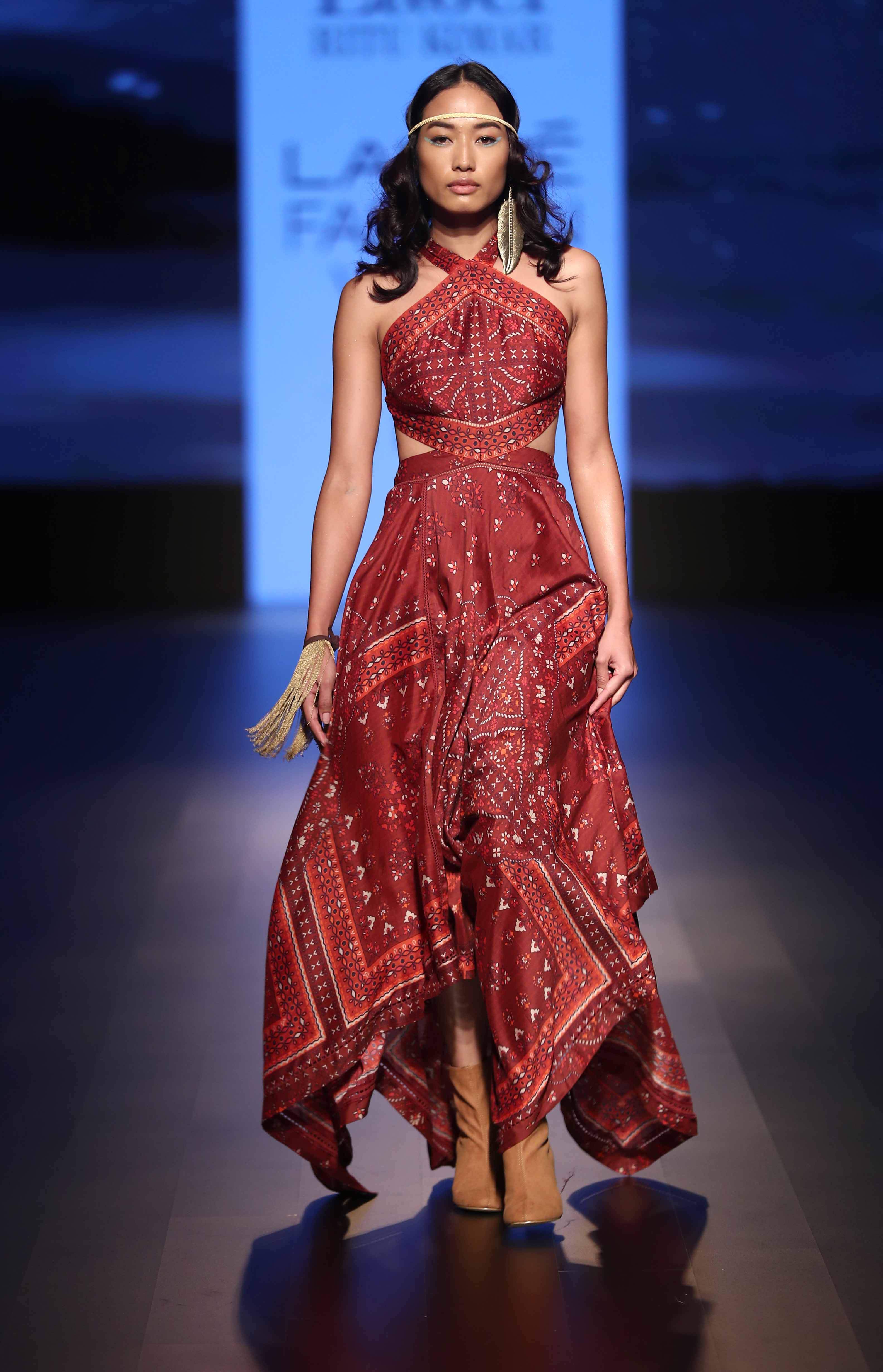 Deconstructed charm
Taking cues from the runways of Europe and America, Label Ritu Kumar married elements from the cultures of Native America, the Inca civilisation and the Wild West. The skillful blending of the three aesthetics aside, what made an impact was a striking red dress in a deconstructed style. With a halter neck, cutouts at the waist and a flowing deconstructed skirt, it also referenced the trend that sees scarf prints being used on garments. 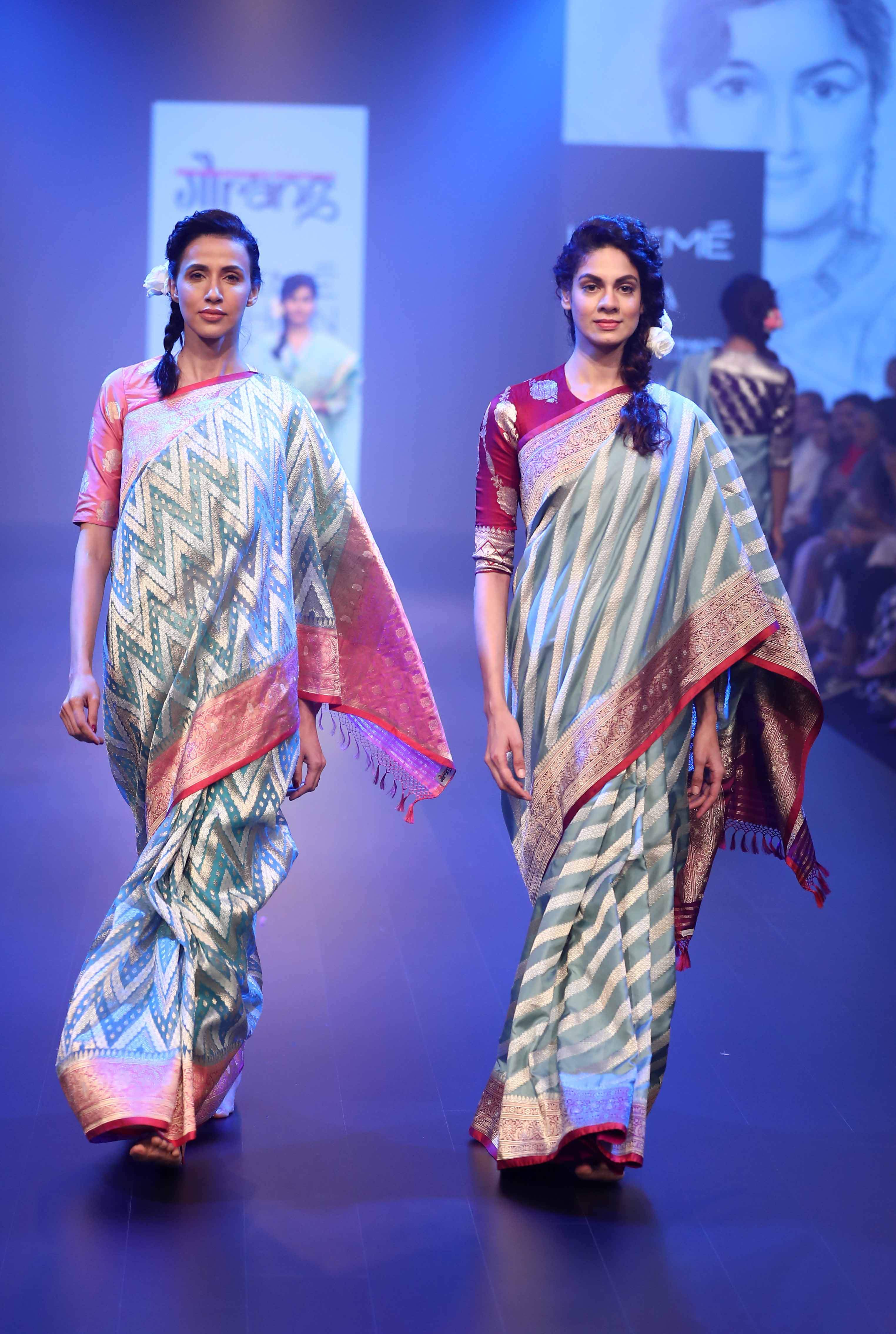 Retro romance
Gaurang Shah, who used the late South Indian actor, Savitri, as his muse for his collection, Anupama, played up retro elements, right from the motifs used to the way his saris were draped. Crafted from Kotas, Mangalgiris and heavy brocades, the colour palette stuck to jewel tones. Joining him on the retro theme was Yogesh Chaudhary of Surendri with his collection Rangoli. Some of his looks included billowing blouses and voluminous skirts with Sanganeri prints and abstract floral motifs. Tie-dye hard
Saaksha & Kinni and Nupur Kanoi reinvented the bandhani technique in contemporary ways. The former’s semi-sheer brown button down did make an impression on the runway, but it was Nupur’s long trench-style jacket in parrot green that really stole the show. 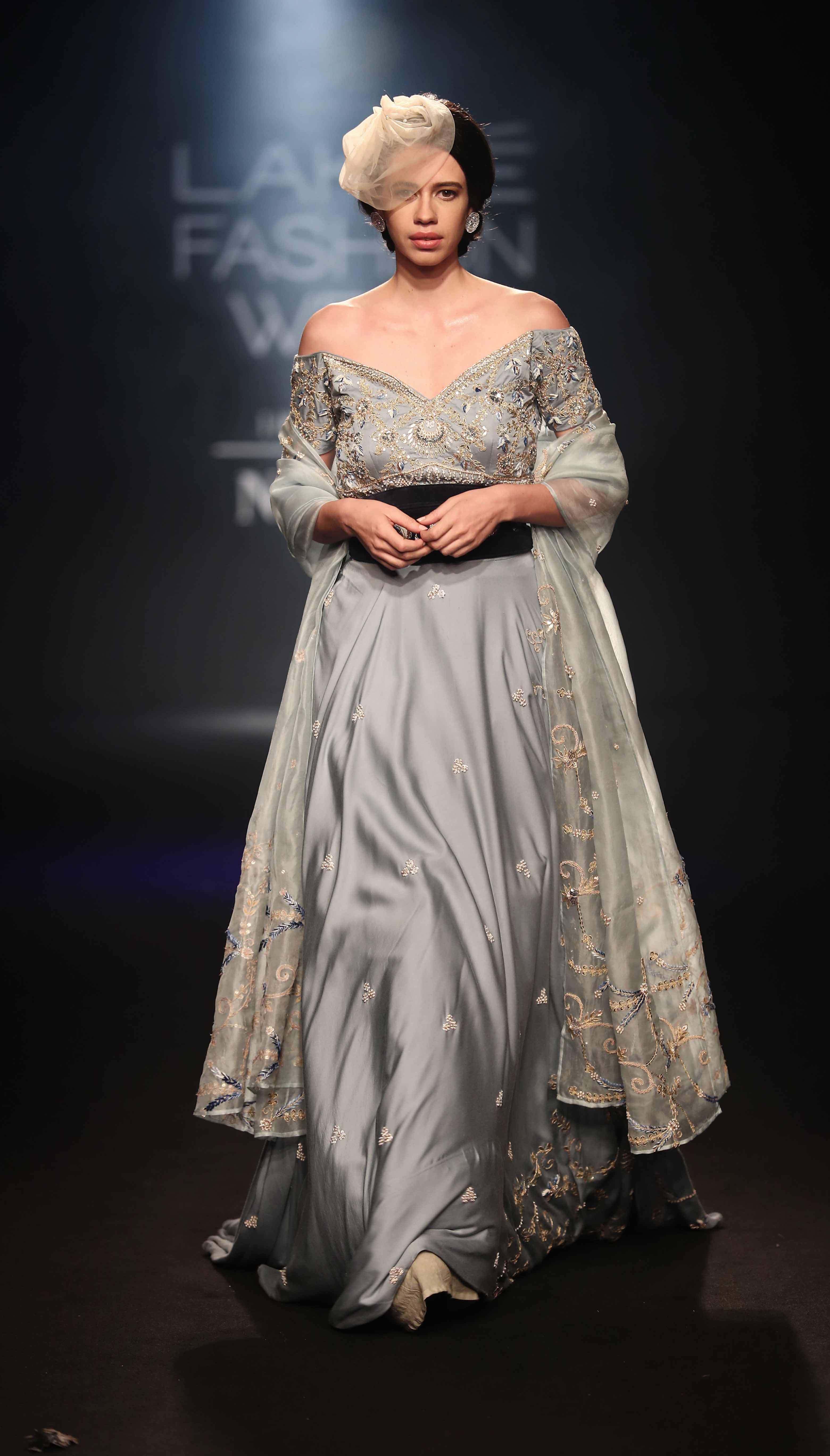 Grey area
If there was one colour that ruled the runways this season, it was grey. Rajesh Pratap’s Tencel collection, Welcome To The Jungle, had a grey and gold number lehenga and kurta ensemble with peacock motifs, while Kalki Koechlin dazzled in a floor-grazing off shoulder gown with pink, gold and zardosi embroidery. 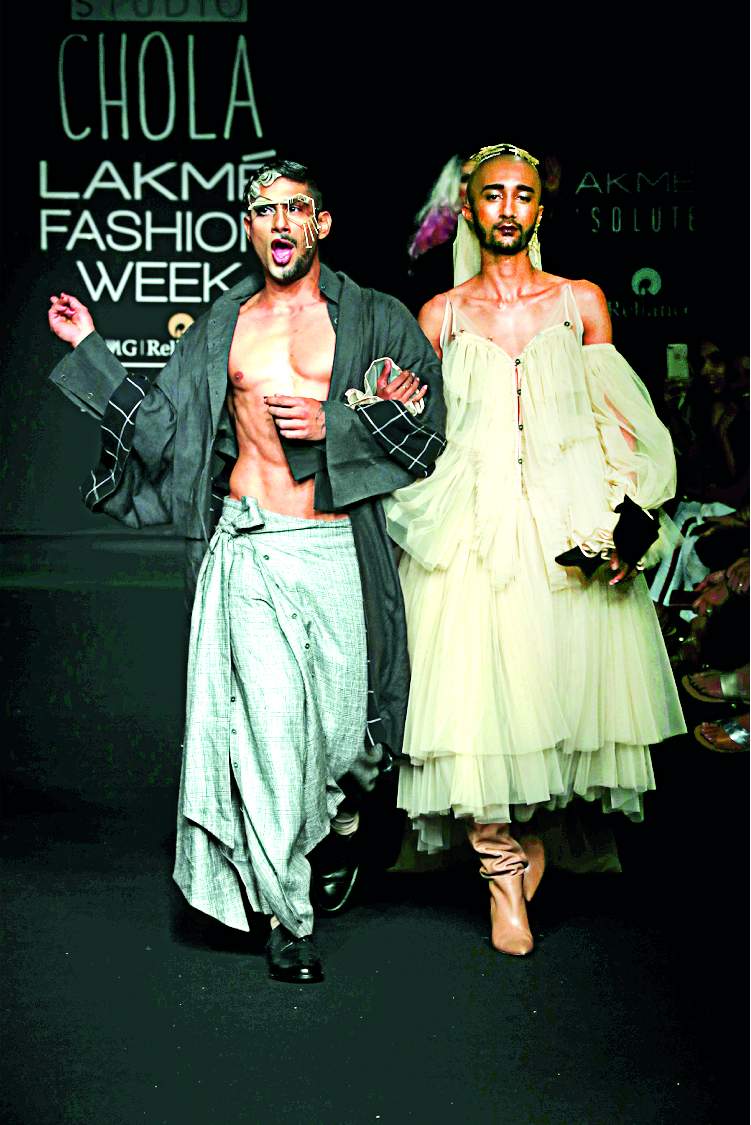 Gender bender
Chola by Sohaya Misra championed gender neutral dressing with their collection, Bye Felicia. From fluid pants to wide-bodied tops, the ensembles used linens, recycled and organic cotton. Some of the looks included a wraparound trouser and black jacket worn by actor Prateik Babbar, who walked down the runway with make-up artist Jason Arland, in a layered and frilled off-white gown teamed with a veil.