Cotton might be the most obvious option for the summer, but labels like Crow and Bailou go beyond the ordinary to offer innovative spins on traditional fabrics to keep their clients interested. Whether worn as a sari or a nifty jumpsuit, breathable, light and loose fabrics are key, say designers including Anaka Narayanan of Brass Tacks and Ron Dutta of Fatherland. We explore further: 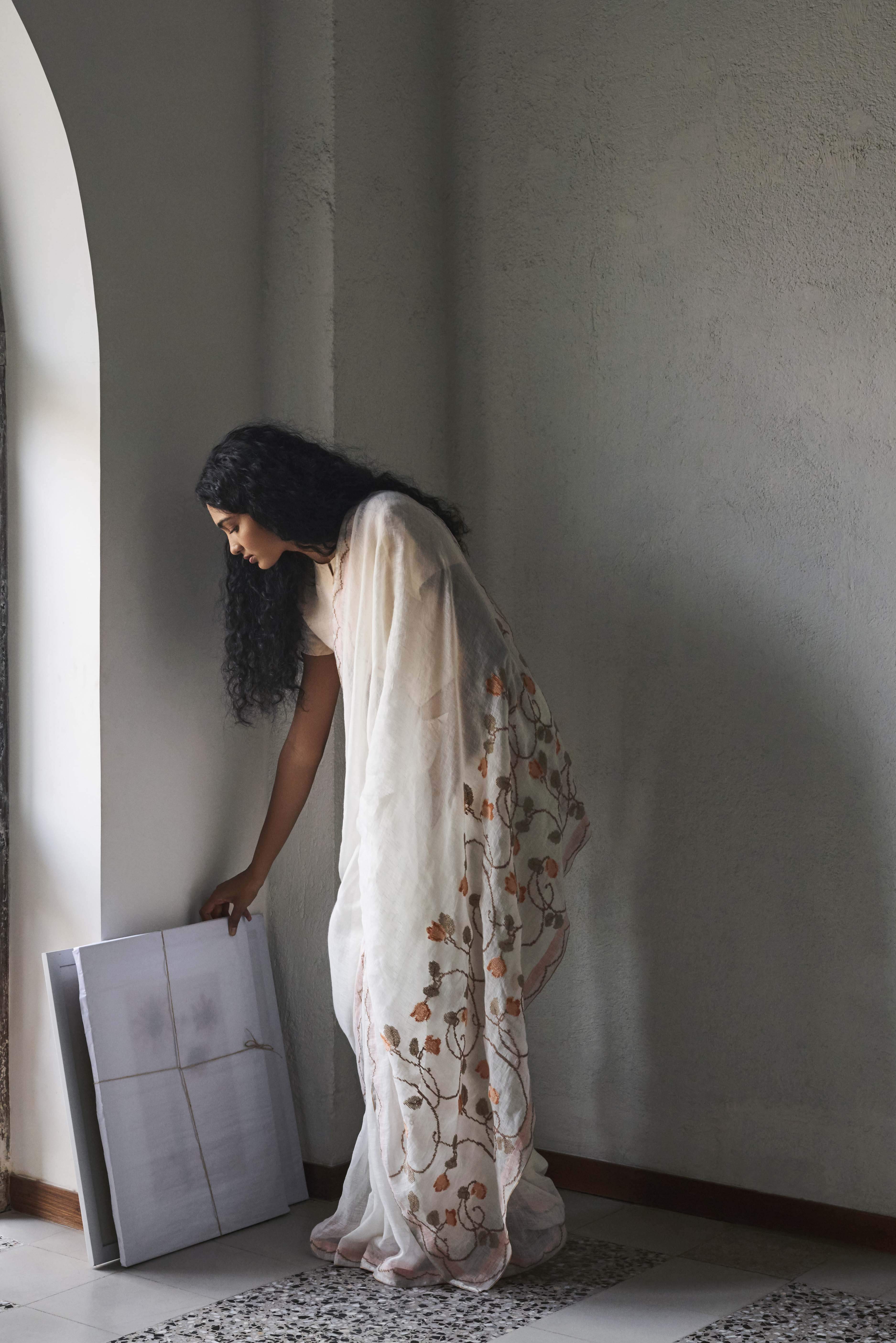 ANAVILA MISRA
For Spring / Summer ’18 designer Anavila Misra has gone romantic for the first time. Entitled In Between, the collection veers away from their signature geometric patterns. They are replaced with soft floral prints and cross-stitch embellishments. “We’ve also used organza in different ways to achieve a romantic and whimsical look, in addition to batik and khatwa work,” explains the Mumbai-based designer who launched the Spring / Summer collection at Raintree last week. The primarily white colour palette in In Between is contrasted by dreamy pastels in shades such as rose, periwinkle and soft yellow. Besides saris, the collection includes dresses, tunics, blouses, dupattas and stoles. As a pioneer of the linen sari, Anavila strongly believes that one doesn’t need to retire the drape for the summer. “We use weaves that are loose, airy, light and gauzy. They are made with linen khadi and mulmul khadi. We’ve also done jamdani with linen, which is light and summer-friendly too,” she explains, adding, “Even the way a sari is worn makes a difference. It just looks like a lot of fabric, but it really isn’t. You can adjust it as per your comfort level.”  Anavila also launched a new range of handcrafted dolls, Busa and Friends, made from soft-hued fabrics, recently. While ‘Busa’ the sari doll was introduced about a year ago, ‘the friends’ which include monkeys, rabbits, cats and giraffes were born only recently. “I was looking for dolls for my niece and couldn’t find anything appropriate. So I decided to make my own. That’s how I got the idea for Busa. This year, we’ve added a range of cute animals to keep Busa company,” shares Anavila. 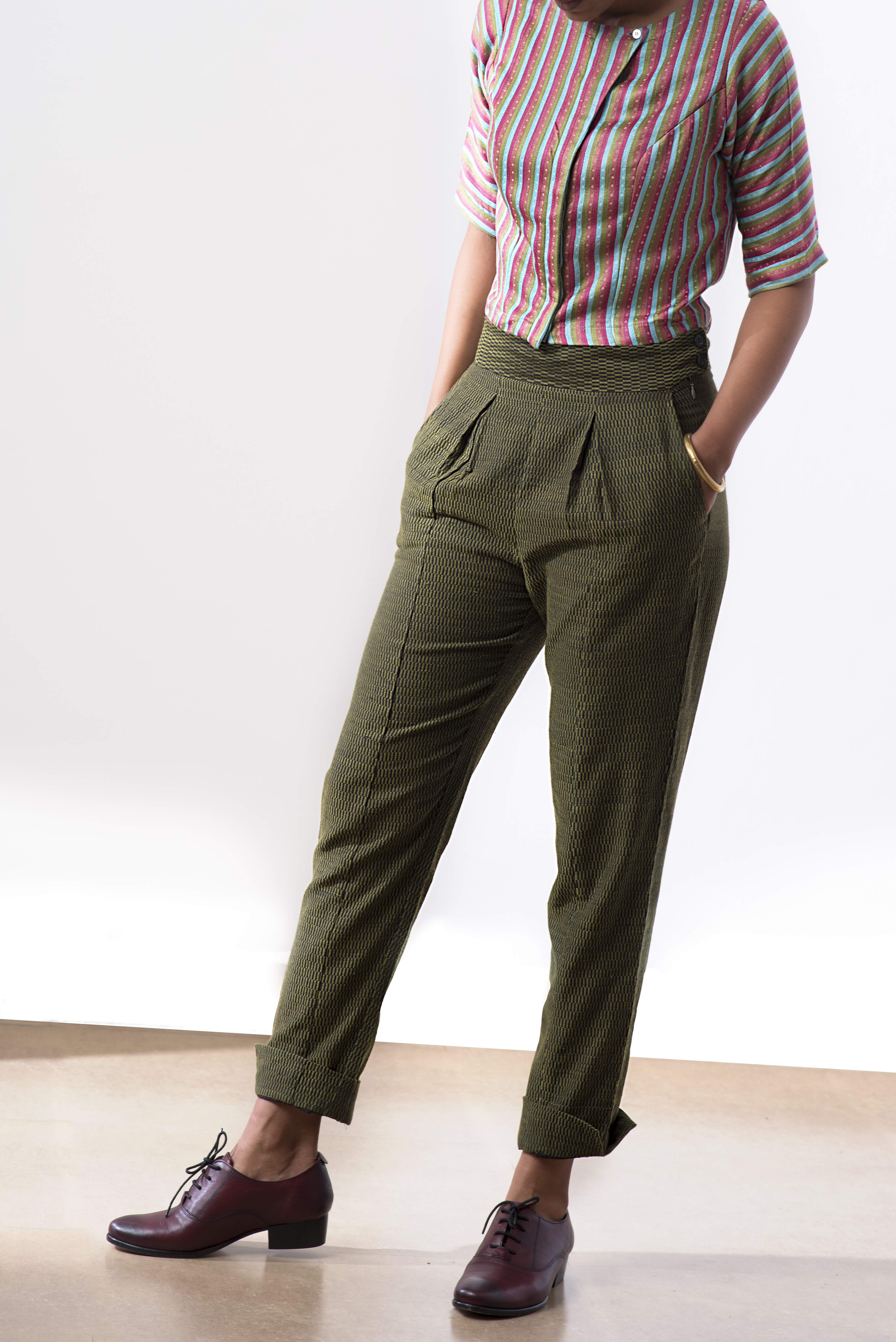 ANAKA NARAYANAN
When Chennai-based Anaka Narayanan started Brass Tacks about 11 years ago, the aim was to celebrate handwoven fabrics. Ever since its inception, Brass Tacks has worked extensively with khadi and linen, and has even teamed up with local weaving clusters to present garments that are contemporary yet rooted in tradition. “In India, light weaves work all year round. We usually work with khadi cotton that is breathable and loosely woven,” explains Anaka, who recently started experimenting with the ballakami weave, a specialty of the Srikakulam region in Andhra Pradesh. “It’s not specifically for the summer but it is a breathable textile. It is usually woven with an extra weft that adds texture. While we have used them already in our last collection, we’re looking at including them in future collections as well,” she tells us. Echoing Anavila’s thoughts, Anaka feels that the way the sari is draped is what one should focus on. “You could swap the heavy underskirts for something that is really thin or reduce the number of pleats. The possibilities are endless,” she says. 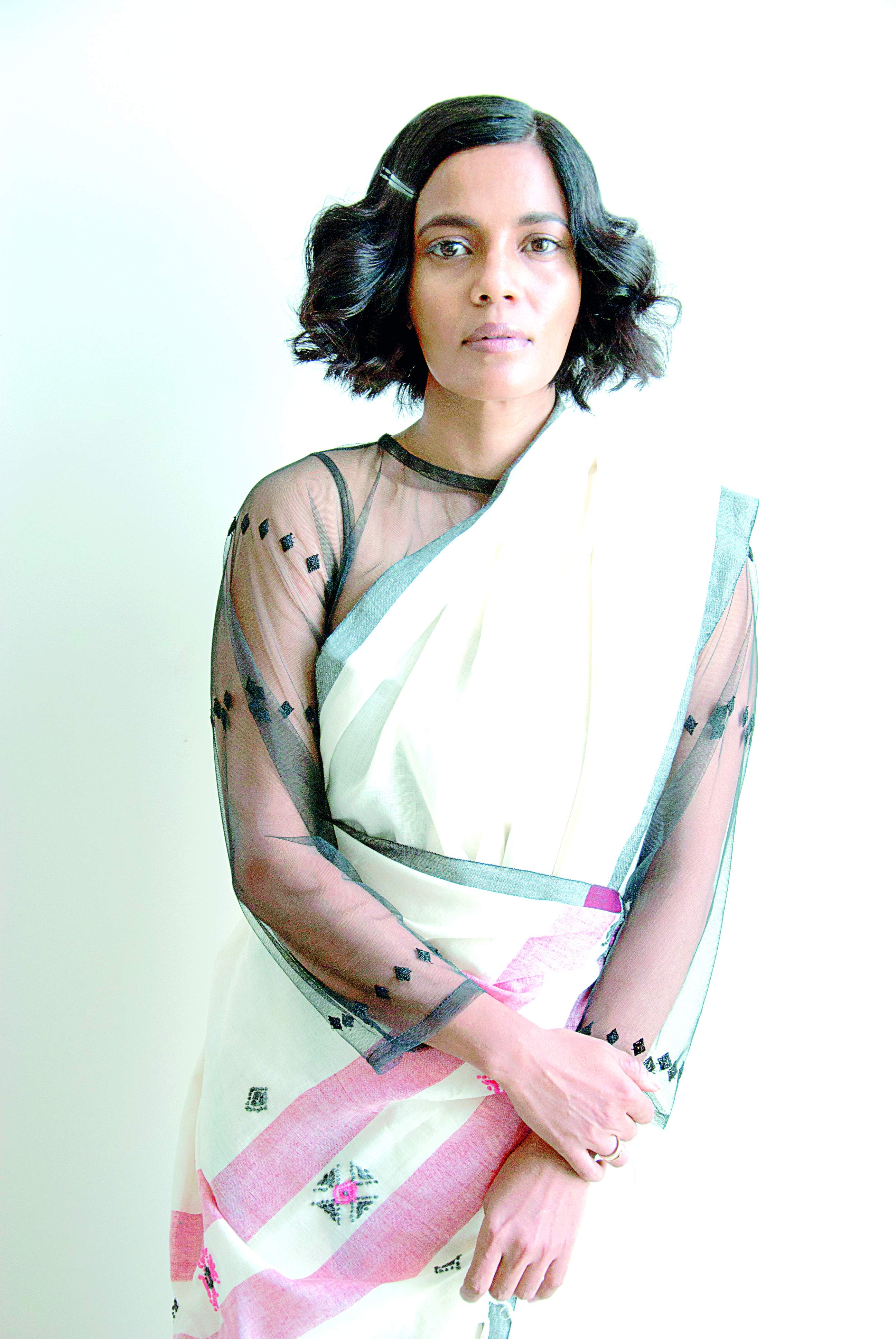 RON DUTTA
At the label Fatherland, designer Ron Dutta has focused a lot of his attention on jamdani. But unlike the traditional Dhaka or West Bengal version, Ron creates weaves that are super soft and devoid of starch. “The fall is almost as effortless as that of chiffon,” he shares. While the label was formed with the intention of bringing back gems from the past, Ron ensures there is some level of reinvention in everything he does, to keep things interesting for the modern palate. “Jamdani might be our primary focus at the moment but we’ve also used a 70 count cotton in our last line, Pukhoor, which is a Toda (a tribal group) embroidery style,” says Ron. The collection of tops, saris and blouses, is a reflection of the Toda life, from the bamboo hut-inspired blouse to the sari bearing hand-embroidered Pukhoor motifs, “This is the first time we did embroidery on a saris,” reveals Ron, who is currently working on a line of garments inspired by temple frescoes, expected to launch by mid-April. “We’ve used a printing technique that’s neither block-printing nor screen-printing,” he tells us. 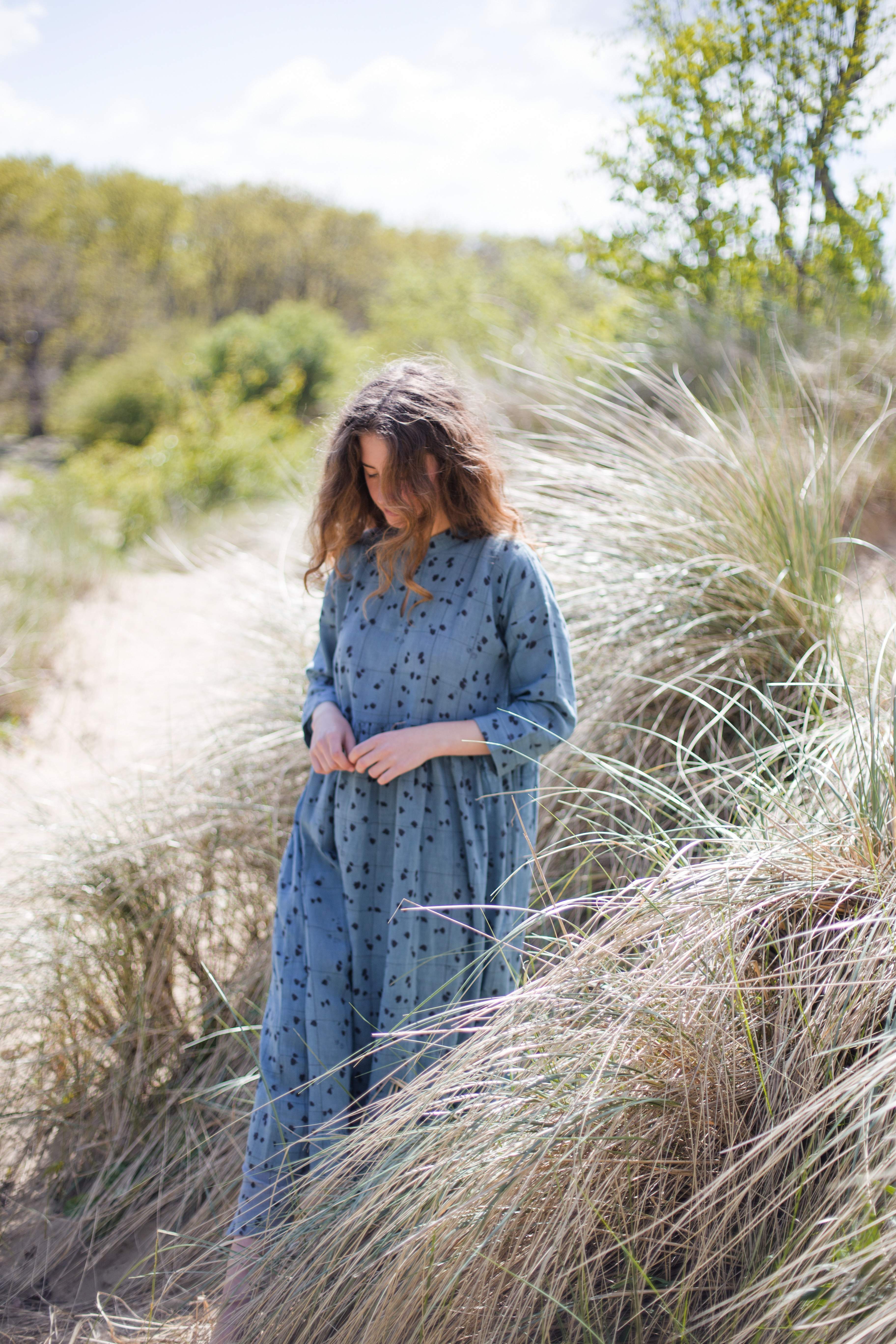 SHAILA KHUBCHANDANI
Easy silhouettes and luxe handwoven fabrics are the hallmarks of the label Crow by Shaila Khubchandani. From slouchy dresses to breezy tops and jackets, the textiles used are fuss-free and minimal, but during her research Shaila came across the tangalia weave of Surendranagar in Bhuj. “This was one of the most unique summer-friendly weaves I worked with,” she recalls. The specialty lies in the textural fabric which is achieved by creating knots with contrasting threads along the warp and pushing them together to create raised dots. “This was originally used by tribes in the region. The colours are very earthy as they are derived from natural dyes. Think maroon, brown, mustard and green. They use organic cotton, woven loosely, making it very breathable,” says Shaila, who explains that she was drawn to this weave as Crow is big on textiles, not so much on silhouettes. “We prefer to allow the textile speak for itself,” she says in conclusion. 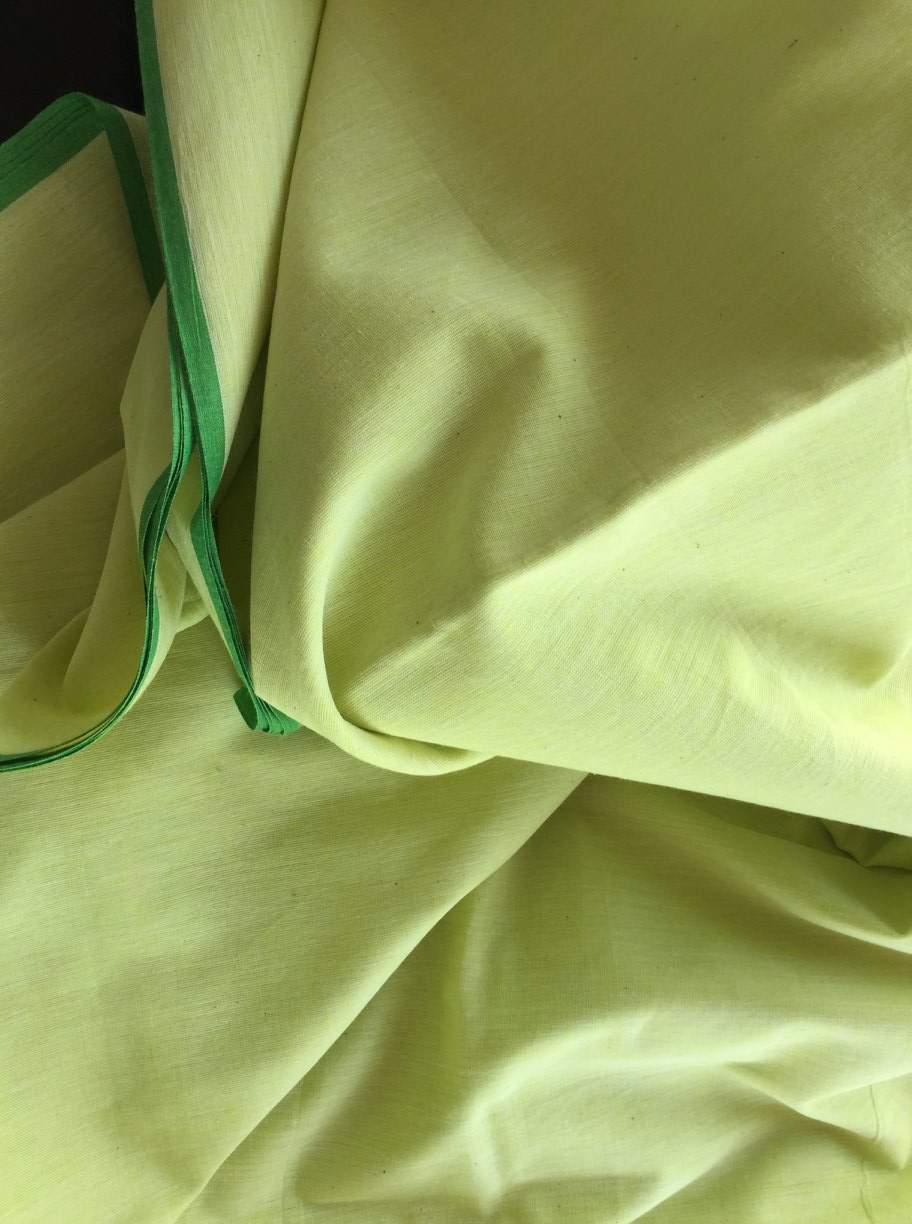 BAPPADITYA BISWAS
Bappaditya Biswas of Kolkata-based label Bailou is a man of few words. The designer and his wife, Rumi, may have consciously tried to stay out of the limelight since they started the label in 2002, but being sought after by names like Vidya Balan, means they have a niche fan following. Innovation (they introduced the disco khadi — a sari woven, rather than embroidered, with sequins), use of colour (a blend of vibrant and subtle hues) and pricing (their Abir sari starts at `750) are some of their strong points. To make the sari more wearable, they created drapes with dhoti fabric. “We’ve been experimenting with dhoti fabric for the past three years. This sari has been very popular with our clients. It’s light and soft on the skin and a great buy for the summer,” explains Bappaditya, whose label specialises in Bengal handlooms. 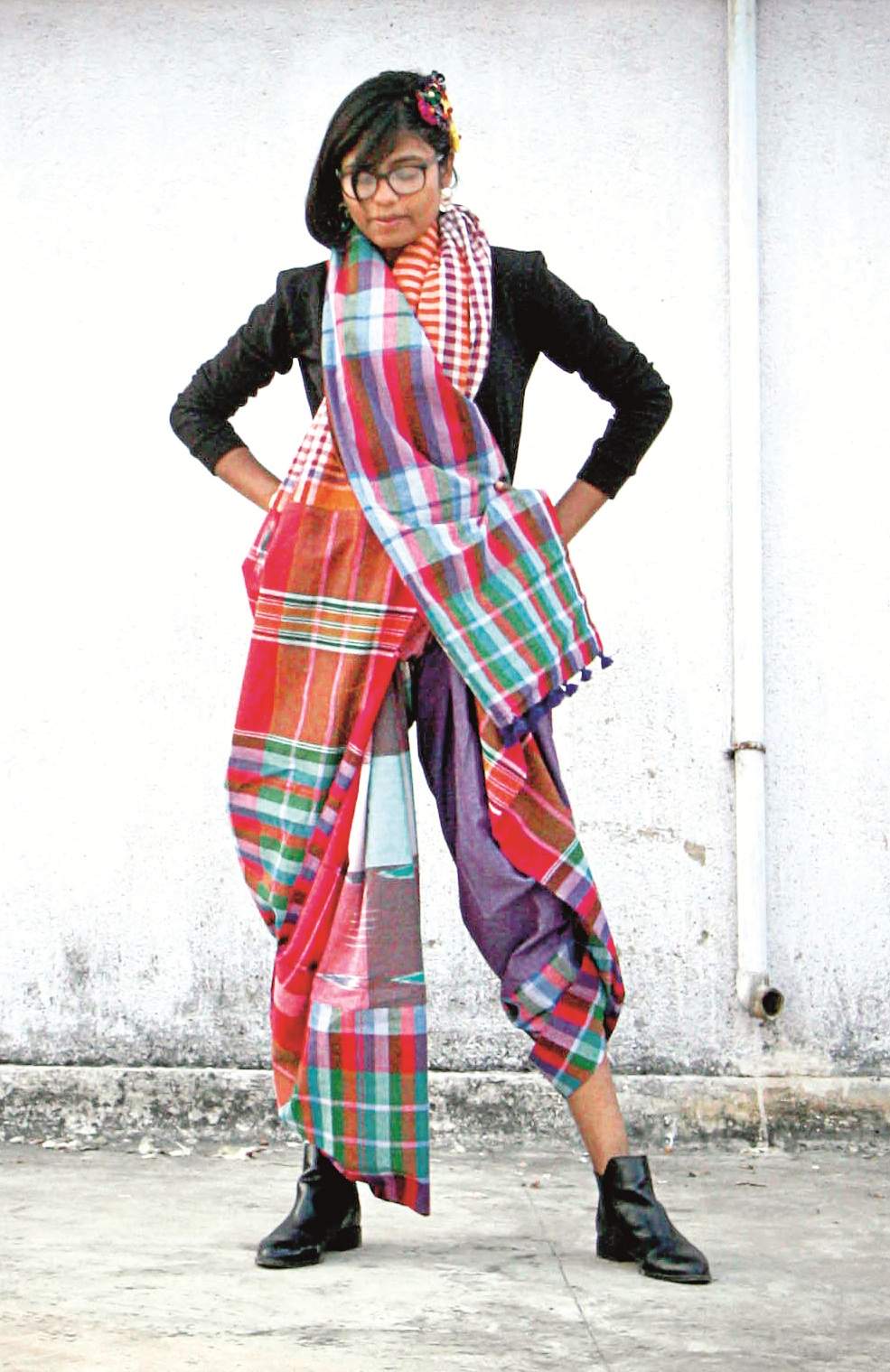 SANJUKTA ROY
It was six years ago that designer Sanjukta Roy first experimented with gamcha fabrics, traditionally used for towels and wipes. While there have been other designers like Abraham and Thakore and Bibi Russell who have worked with gamcha, for Sanjukta, it is her sole focus. Apart from saris, at Sanjukta’s studio, gamcha is also turned into dresses, trousers, tops and blouses. “It is built for India’s harsh weather and is used extensively across places like Kerala, West Bengal, Orissa and Tamil Nadu. It is absorbent, breathable, fast-drying and comfortable, so it is great to wear,” says Kolkata-based Sanjukta, who is currently working on a  collection of gamcha garments which will be available on  Jaypore.com by the end of April. She is also gearing up for a pop-up in Japan later this year.