Yup, you read that right. This flute crafted entirely out of dark chocolate actually plays in pitch. Inspired by World Chocolate Day (July 7) Bengaluru-based pastry chef Vinesh Johny teamed up with friend and popular flute player Parth Chandiramani for 10 days over one mad idea: create a wind instrument out of chocolate that actually works.

"We knew some sound would come from a chocolate instrument," admits Vinesh, who is fresh off the high of launching his new book New-School Sweets. But he adds, "I never thought chocolate could make music!" 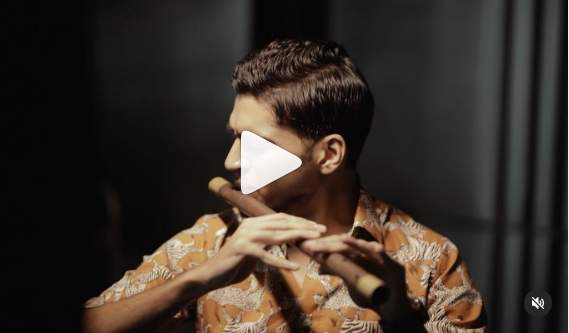 After much trial and error recorded over fun video clips that have been curated and posted on his Instagram handle, they finally tasted success.

Vinesh experimented with pipes of various thicknesses and spacing between the notes, while Parth would attempt to play each one. There's even a funny clip of Parth starting to play one such flute and having it break in half, while the team of pastry chefs from Vinesh's Lavonne Academy of Baking Science and Pastry has a laugh before they get back to the drawing board and go at it again.

Eventually, they did manage just the right formulation, pitch, and density of chocolate. Parth showcases the chocolate instrument's capacities at the end of the video, playing AR Rahman's Urvasi Urvasi. And we are floored!