IS CHINGRI (PRAWN) tastier than fish? Is the East Bengal football team better than Mohun Bagan? While such debates are never-ending between the Bangal and the Ghoti (East Bengal versus West Bengal), Sonar Tori is calling for a truce with their Ghoti Bangal Lorai.

The food festival that celebrates delectable cuisines from both sides of the border has been crafted by Executive Chef Bhaskar Dasgupta. The elaborate menu, available in both veg and non-veg thalis, reflects the expertise of the chef, who is set to treat connoisseurs with not just signature dishes from Bangladesh and West Bengal, but presents some long lost recipes as well.

After the welcome drinks of a traditional Beller Sorbot (wood-apple) and Aam Porar Sorbot (tangy green mango), we started our feast with non-veg starters from the Bangal menu. The Macher (fish) Seekh Kebab and Murgir (chicken) Harir Kebab hit the right spot with their sharp flavours. Served hot, the small fried balls of Rui Macher Deemer Bora (caviar-based fritters) next on our plates, were crispy, and can easily send you on a binge fest. The copper thali, conveniently made space for an assortment of Bhate/Bhaja that included Morich Bhorta, Begun Mosala Bhaji, Shutki Bhorta, Mishti Kumro Lonka Bhorta and more, tantalising our taste buds with a gamut of flavours. 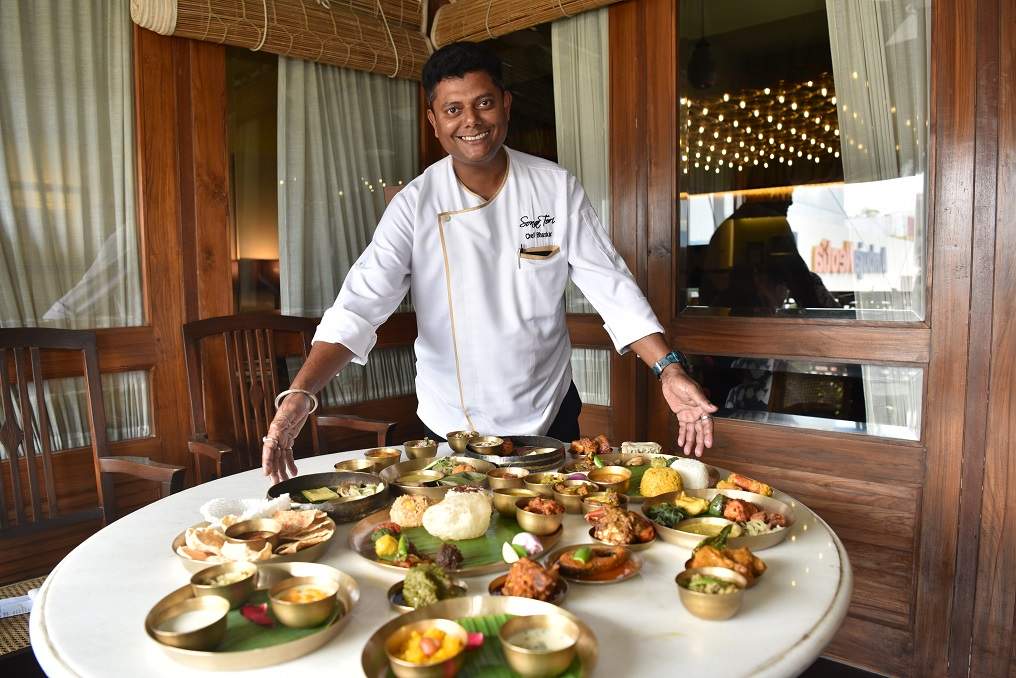 From the staples that include Echorer (jackfruit) Biryani, Khuska, Luchi and Lebu Dal, we loved the striking flavour of the dal that was high on gondhoraj lebu, a variety of lime that is predominantly used in Bangladeshi cuisine. From the main course, it was the Kakrar Kosha (Crab curry) and Kancha Ilisher Johl (Ilish curry) that made us lean towards the spicy cuisine of the neighbouring country. The creamy Taal Saasher Kheer (Palmyra-based dessert) sealed our hearts with more love. From the Ghoti menu, we became fans of the Rui Macher Aloor Chop, from the 10 ten appetising fritters on the menu that included Posto Bora, Narkel Bhaja, Puti Maach Bhaja, and more. Adding zing to the pulao, the chef ’s Mosola Koraisutir Pulao (Masala Peas Pulao) was the clear winner with its balanced spices. We relished it with the Robibarer Manghor Jhol (mutton cooked in light spices) and Doi Katla (Fish cooked in yoghurt), which was soothing to the palate. From the three selections of dessert, Aam doi, Mihidana and Channar Payesh, we settled with the Aam Doi, thereby concluding our tryst with the two remarkable cuisines. The festival starts on June 14 and is on till June 23. `1,099 onwards